Summer in New England isn’t complete without enjoying some deep-fried seafood at a dine-in-the-rough clam shack. Food and travel writer Mike Urban, author of Clam Shacks: The Ultimate Guide to New England’s Most Fantastic Seafood Eateries (Cider Mill Press, 2011) has been noshing at and writing about these iconic eateries for years. Here are his picks for the 10 best clam shacks in New England. 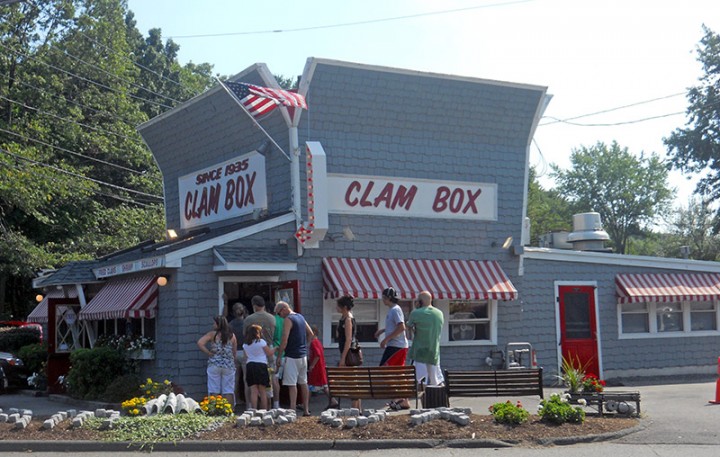 The Clam Box in Ipswich, Massachusetts, specializes in deep-fried clams that never disappoint.

This shack, located in a shingled building in Ipswich, Massachusetts, that resembles an open-topped clam box, is hands-down the best place for fried clams anywhere. Owner Marina “Chickie” Aggelakis personally selects all the clams from her suppliers’ trucks each morning. The chosen ones are “washed” in evaporated milk, coated with cornflour and white pastry flour, then twice-fried for perfect taste and texture. The Box changes its cooking oil twice daily, ensuring an amazing deep-fried treat that never disappoints. 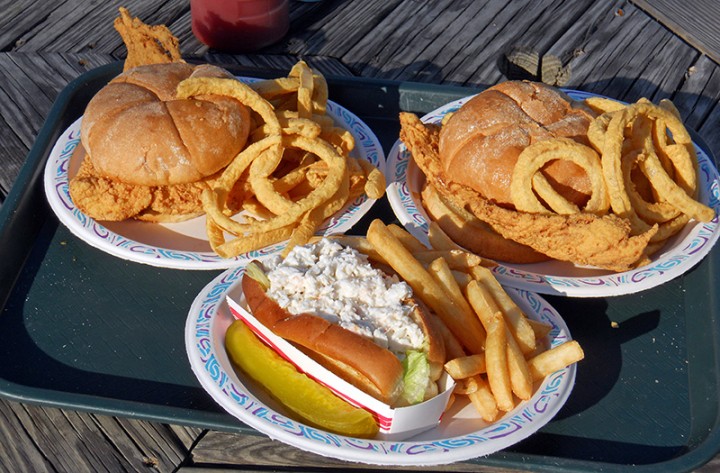 This modest roadhouse on Route 133 (also known as the “Clam Highway”) cooks its clams and other deep-fried seafood in a mixture of vegetable oil and animal fat, providing a major flavor boost to everything that comes out of the deep fryers. Also, be sure to try their “Best Seafood Chowder,” with its creamy, tomato-streaked broth that’s loaded with fresh clams, haddock, shrimp, sea scallops, and lobster.

One of two large seafood emporiums located at the gateway to Seabrook’s public beaches (the other is Brown’s, across the street), Markey’s is a rollicking, fun place with a large covered deck out back that hangs over the tidal Blackwater River. Owner Tom Markey presides over the deep fryers, and he cooks up some excellent clams, scallops, haddock, shrimp, and fried lobster. There’s also a monstrous fried seafood platter topped with two fried lobster tails. 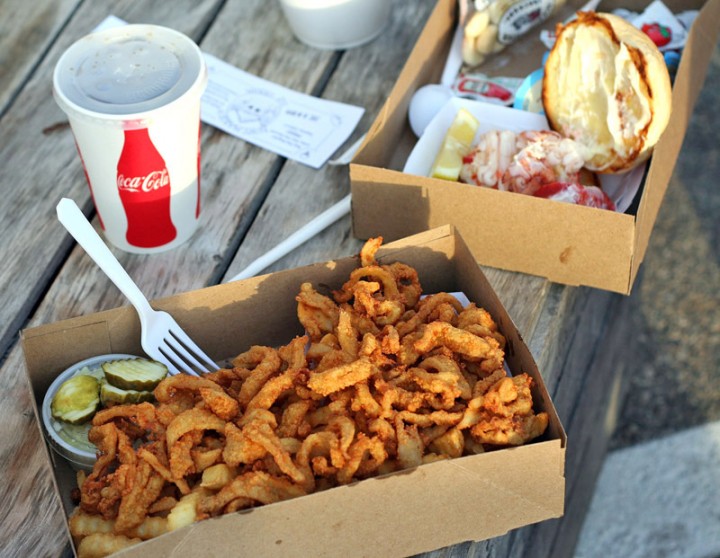 The clams at The Clam Shack in Kennebunkport, Maine, are cooked and served in wonderfully crisp, chewy portions by the platter or the pint.

The Clam Shack | Kennebunk, ME 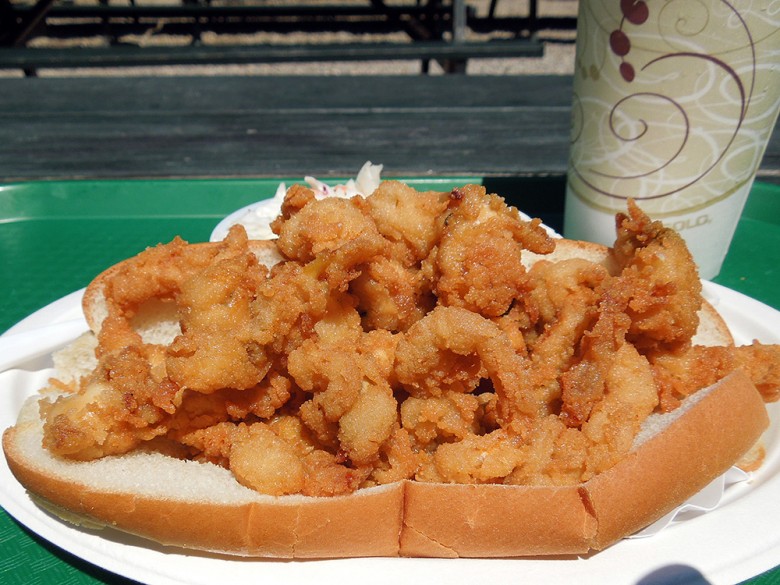 Lenny and Joe’s whole-belly clam roll is a bargain and a half.

This Connecticut shoreline institution, just up the road from Hammonasset Beach State Park, is a year-round seafood palace, serving up deep-fried platters of clams, scallops, shrimp, and wonderfully tasty scrod. Lighter fare in the form of grilled and broiled seafood and fresh, steamed lobster round out the menu. Their hot, buttered lobster roll is a Connecticut shoreline classic. 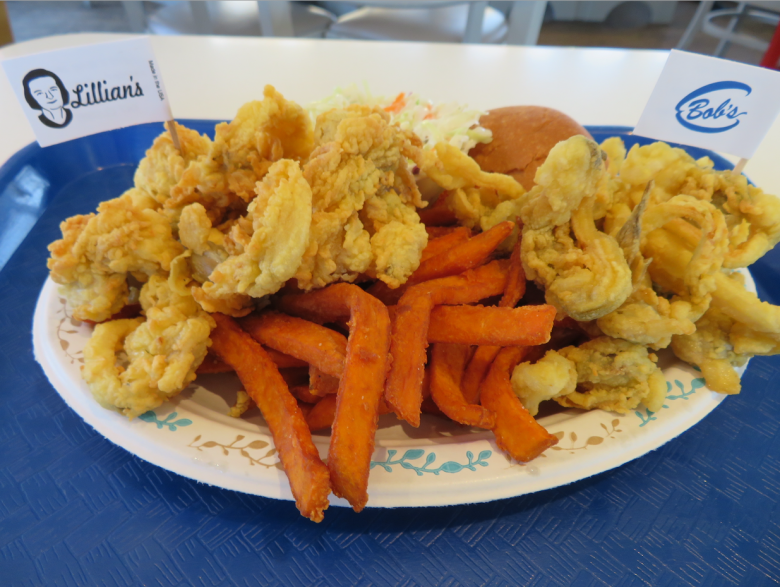 For years, Bob’s has been a must-stop on car trips to Maine, and with good reason. This year-round clam shack in Kittery (a second Portland location opened in 2018) offers up all the right stuff—fried clams, clam strips, scallops, shrimp, fish, and more, along with killer clam and fish chowders. This is also a great spot to have your first lobster roll upon arrival in the Pine Tree State. Among the numerous baskets, dinners, and plates, try the Clam 2 Ways combo—fried whole bellies done using Bob’s original recipe, and longtime cashier Lillian’s recipe, which calls for an egg wash before breading and frying. 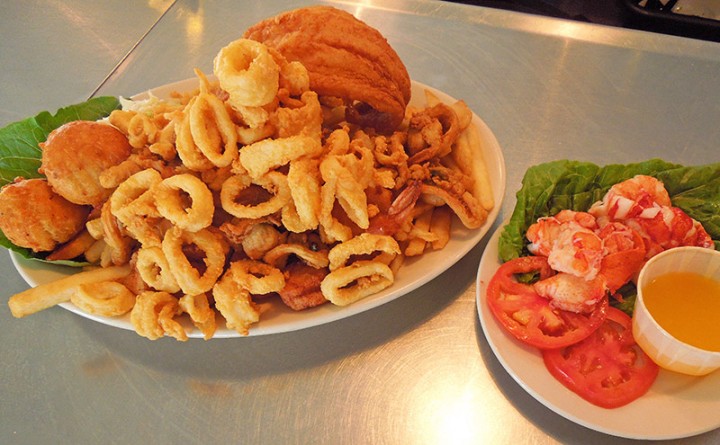 Evelyn’s Drive-in in Tiverton, Rhode Island, serves their seafood up with a side of serenity.

Serenity reigns at this clam shack nestled on the shores of Nanaquaket Pond in eastern Rhode Island. There’s a sign by the kitchen that reads: If You’re in a Hurry, You’re in the Wrong Place. Owners Jane and Domenic Bitto delight their customers with deep-fried seafood, excellent clear-broth clam chowder, light, fluffy clam cakes, and exotic lobster chow mein. Be sure to catch a sunset from the back patio while sipping a Newport Storm beer, glass of wine, or cocktail. 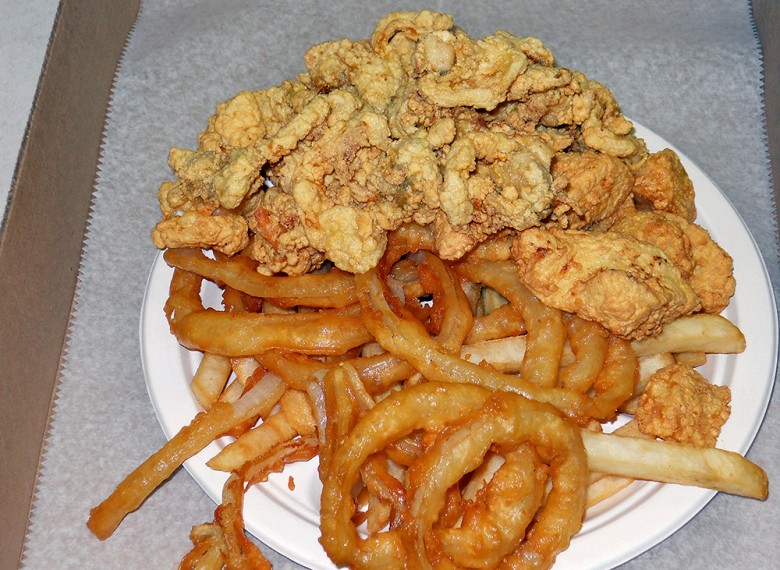 A platter of Woodman’s finest, in its signature beer-case box tray.

This is the place where, they say, the fried clam was invented nearly a hundred years ago. To many, Woodman’s is the gold standard for fried clams. The key to Woodman’s success and longevity in the deep-fried clam world is the lard they use in their deep fryers. Founder Lawrence “Chubby” Woodman used it back in 1916, and lard is still used today. The clams are sweet, tender, and crunchy, and they come from local clam beds in Essex and Ipswich, considered by many to be the best in the world. Don’t miss the batter-fried onion rings or the deep-fried lobster tail.

This famous lobster place doubles as a clam shack, with its succulent fried clams and other deep-fried seafood. Try the locally sourced sea scallops and fried haddock sandwich. Also popular are the “Somewhat Famous” crab-cake sandwich and the grilled burger. Five Islands Lobster is situated on a large, wooden town dock overlooking lovely Sheepscot Bay and is serviced by numerous local fishing boats, so the seafood here is as fresh as can be. 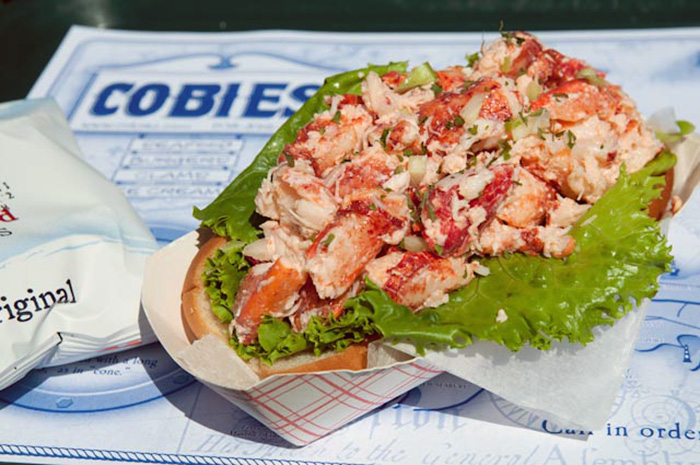 In the tony Cape Cod town of Brewster, there are several fine clam shacks, and Cobie’s is at the top of that list. Housed in a tastefully whitewashed shack at a bend in Route 6A, this place has heavenly fried clams, juicy burgers, thick milkshakes, and a great cold lobster roll made with knuckle meat only. The ice cream stand, with more than 30 flavors of hard and soft ice cream, makes for a great dessert or mid-afternoon snack spot.

Do you agree with Mike’s picks for best clam shacks in New England? Let us know your favorites in the comments below!

Simon Cowell was her judge. Now, she's filling in for him