TRAVEL NOTE: Since many businesses and venues are adjusting their operations in response to COVID-19 health concerns, please contact them directly or check their websites before making travel plans.

Whether you’re an out-of-stater planning a vacation or a Vermont resident looking to check off your bucket list, here’s a sampling of the best things to do in Vermont that was inspired by Yankee’s 2020 feature “The 85 Best Things to Do in New England.” How many have you seen, done, or eaten? 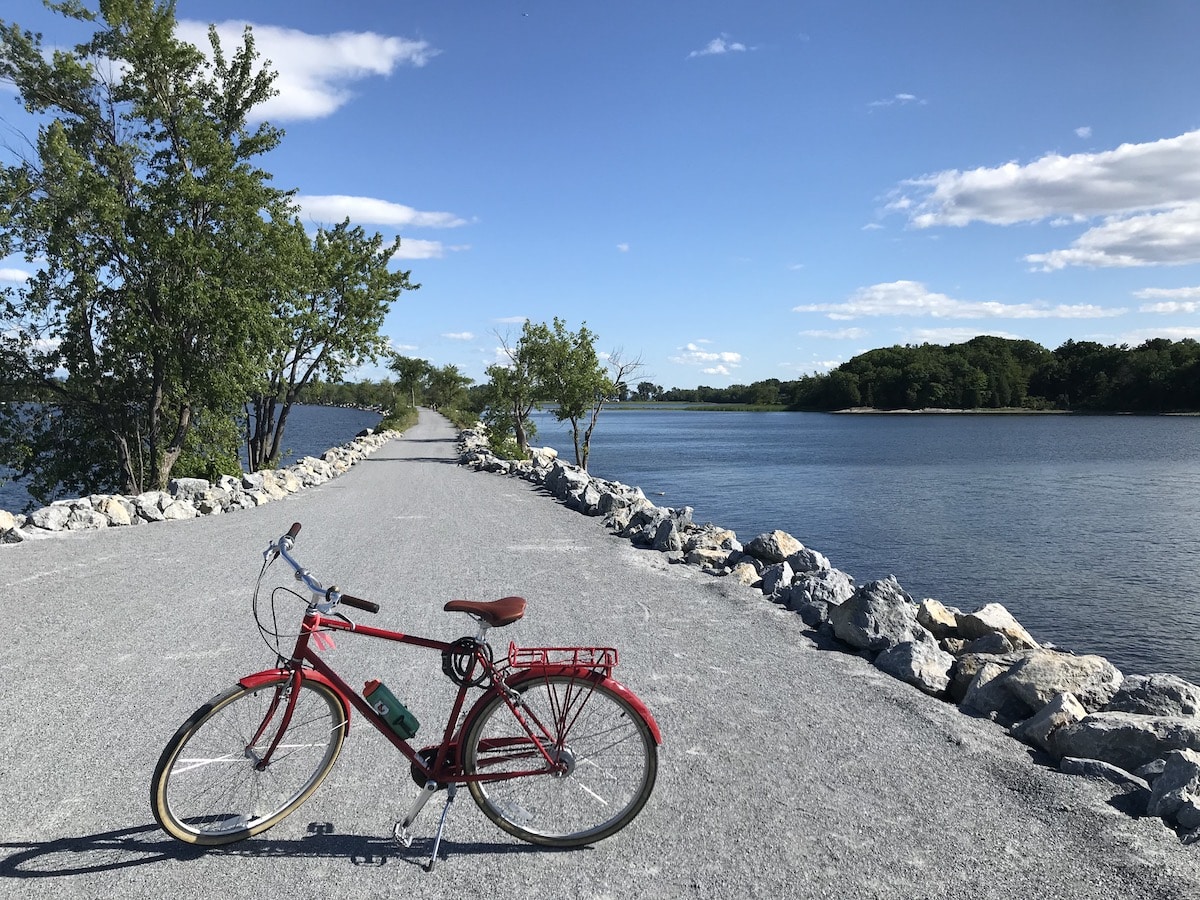 The Island Line Trail includes an unforgettable ride out into Lake Champlain via the Colchester Causeway, which reopened in 2020 after a year of repairs.

10 Best Things to Do in Vermont:
Essential Vermont Experiences

1. Bike from Burlington to the Champlain Islands

With its lake vistas, ice cream shops, sculptures, and swimming spots, the 14-mile Island Line Trail is a biker’s paradise. It includes about four miles along Burlington’s bustling waterfront, while a bridge over the Winooski River at the north end connects to the Colchester Causeway, which extends out into Lake Champlain. From there, a seasonal bike ferry operated by Burlington bike outfitter Local Motion lets riders continue on to the island of South Hero. After you coast back into town, be sure to stick around long enough to see the stunning sunset over the Adirondacks. 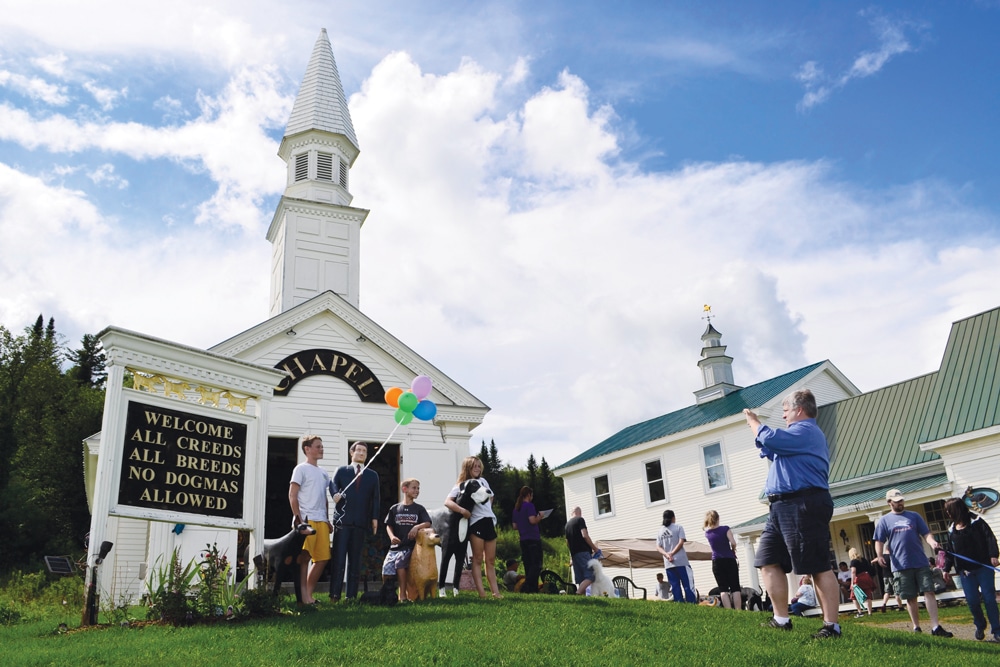 At the heart of Dog Mountain is this pristine, small-scale chapel where images of dogs adorn the stained glass windows and canine sculptures accent the pews.

2. Visit Dog Mountain, Home of the World’s Only Dog Chapel

At the 150-acre haven dubbed Dog Mountain in St. Johnsbury, Vermont, there is a wee church filled with founder and folk artist’s Stephen Huneck’s dog-centric art and visitors’ heartfelt tributes to four-legged friends. You can also let your own pup romp through the fields and take a plunge in the pond — and don’t miss a chance to visit the Stephen Huneck Gallery, which showcases the late artist’s original woodcut prints, giclees, best-selling children’s books, furniture, and more. 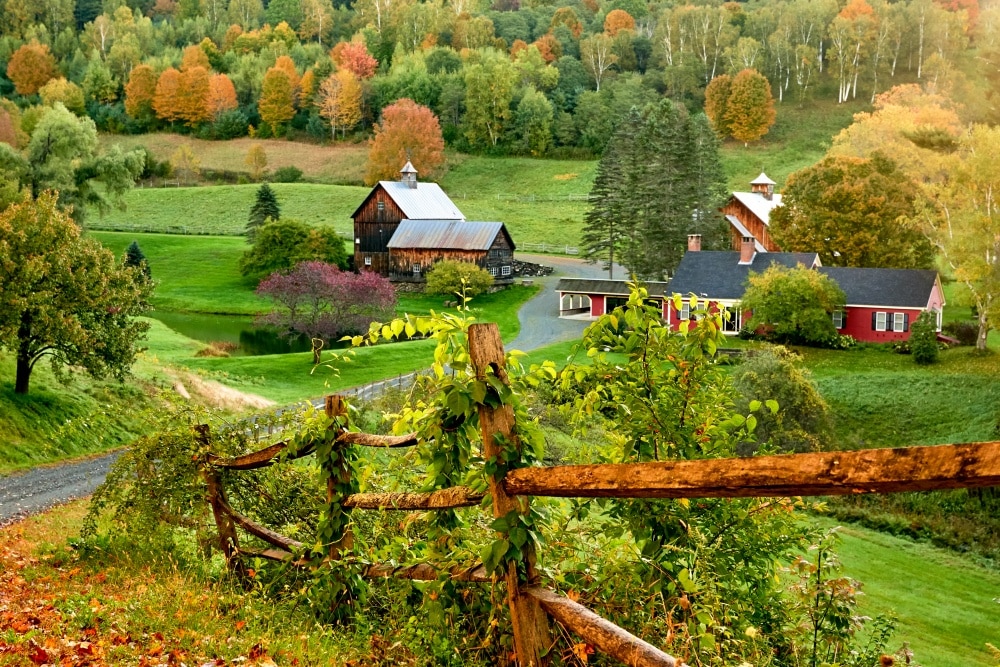 With its big barns, late-1700s farmhouse, and knack for catching the light, this property outside Woodstock is pure catnip for photographers. On a crisp fall morning, the narrow road to Sleepy Hollow Farm might be lined with as many as 20 cars, as pros and amateurs alike hunker down with their tripods. No matter. You’ll get your shot too, and the chance to see all those Instagram “likes” piling up. 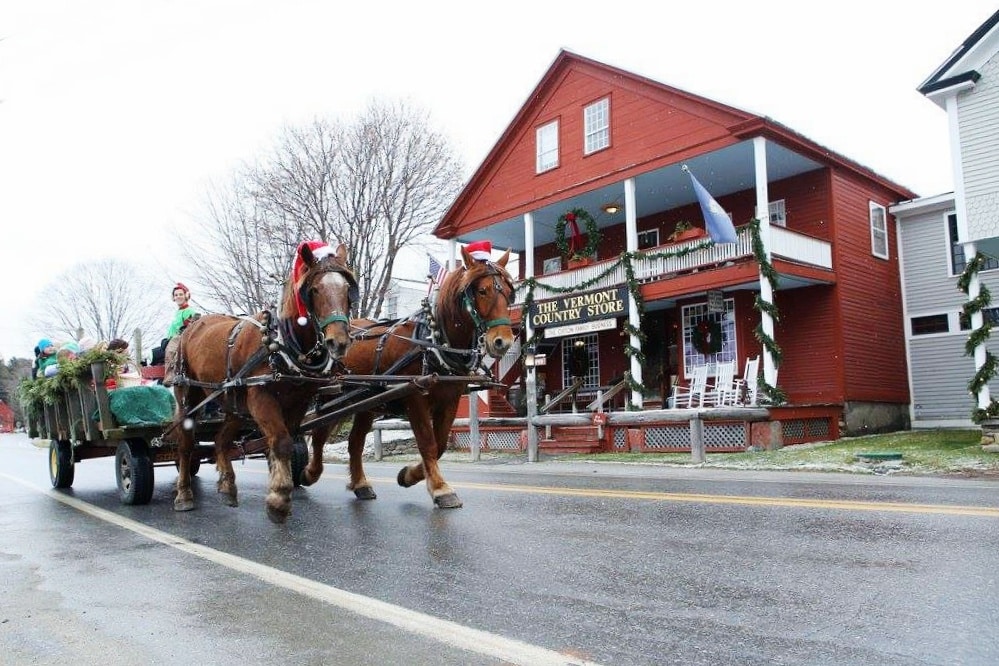 Self-described as a purveyor of “the practical and hard to find,” The Vermont Country Store has been a fixture in Weston since 1946; there’s also a second location in Rockingham.

Courtesy of the Vermont Country Store

4. Shop the Old-Fashioned Way at The Vermont Country Store

Looking for a flannel nightie, a manual typewriter, old-time candies … all in one store? That barely begins to describe the diverse inventory at The Vermont Country Store, founded in Weston in 1946. You’ll find both the expected (maple syrup, wheels of cheddar) and the unexpected (pants stretchers, anyone?) in the aisles; plus, nostalgia is sold by the scoop at the sprawling penny-candy counter.

5. Visit One of Vermont’s Maple Shacks at Sugaring Time

Turning tree sap into something as heavenly sweet as maple syrup only seems like magic. The truth is there’s a real process behind it, and during the six(ish) weeks in late winter and early spring that define maple season, you can get a taste for what’s involved. Observe, sample, and maybe even pitch in at sugar shacks like Morse Farm in Montpelier, where, high-tech gadgetry aside, Burr Morse essentially follows the same recipe as his ancestors two centuries back. Sip the end result, then buy some of that good stuff (in all its forms: syrup, sugar, candy, cream) from the gift shop to take home. Because you can never have enough maple. Ever. 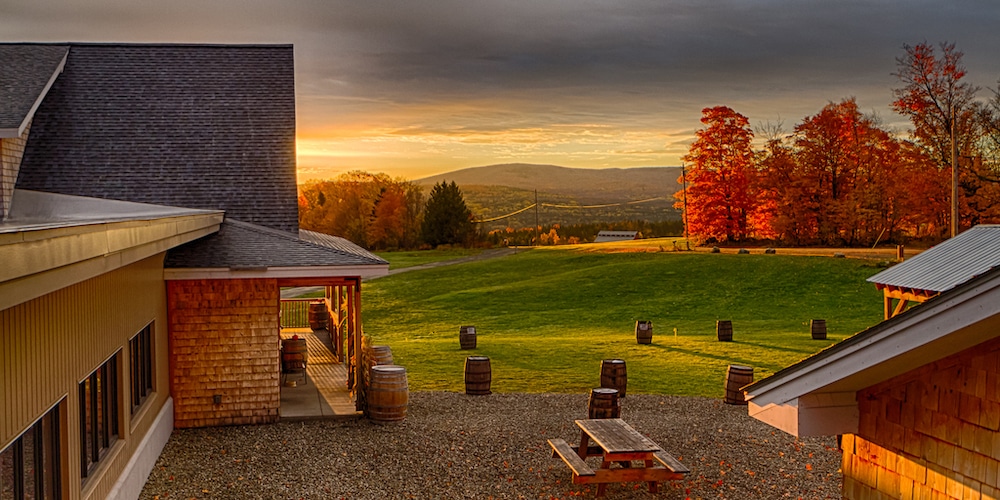 Nestled in the Northeast Kingdom, Hill Farmstead Brewery in Greensboro Bend has been named the world’s best brewery seven times in the past decade.

Nearly since its start in 2010, Hill Farmstead in Greensboro Bend has been a place of pilgrimage for serious beer geeks. Some of the best-loved brews are named after founder  Shaun Hill’s forbears, including the double IPA Abner and the pale ale Edward, while the Philosophical series includes the popular maple-infused imperial stout Beyond Good and Evil and the malty Baltic porter, Fear and Trembling. No matter what’s on tap during your visit, you can assume it will be worth the drive. Mediocrity has no place here, as evidenced by the long list of national awards and accolades Hill Farmstead hauls in, year after year. 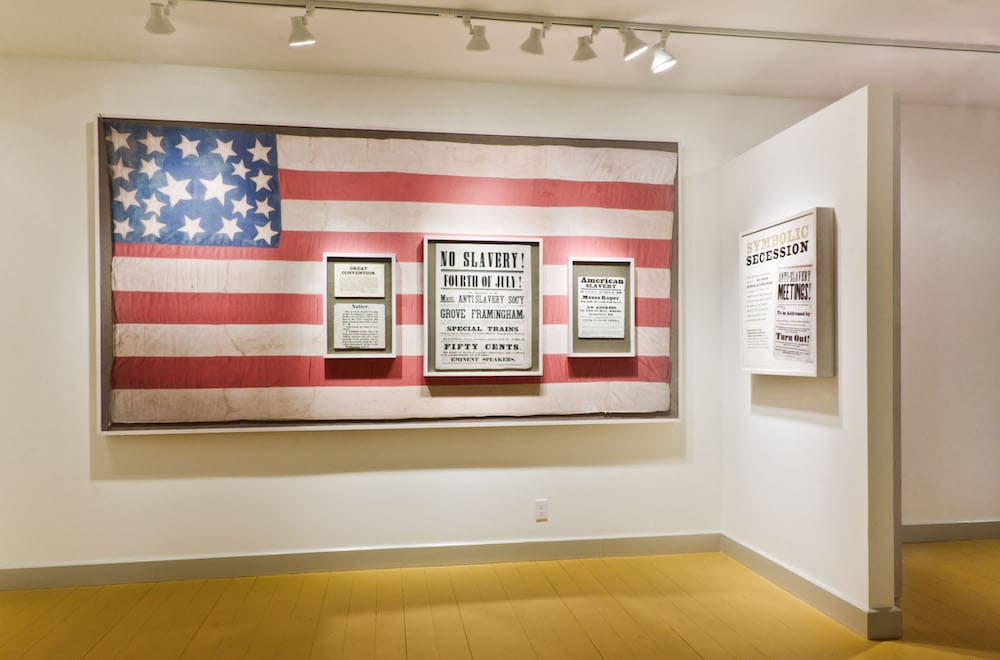 A section of Rokeby’s cornerstone exhibit, Free & Safe: The Underground Railroad in Vermont.

7. Learn About the Underground Railroad at Rokeby Museum

Vermont was an early leader in abolition — it outlawed slavery in 1777 — which meant that when federal fugitive slave laws were enacted, it was at the fore of the now-legendary interracial, interfaith effort that helped slaves escape to freedom. The Underground Railroad passed through more than 80 New England cities and towns, and today there are dozens of historical sites tied to that era, but among these Rokeby Museum in Ferrisburgh, Vermont, stands out for exceptional storytelling and a beautiful rural setting. 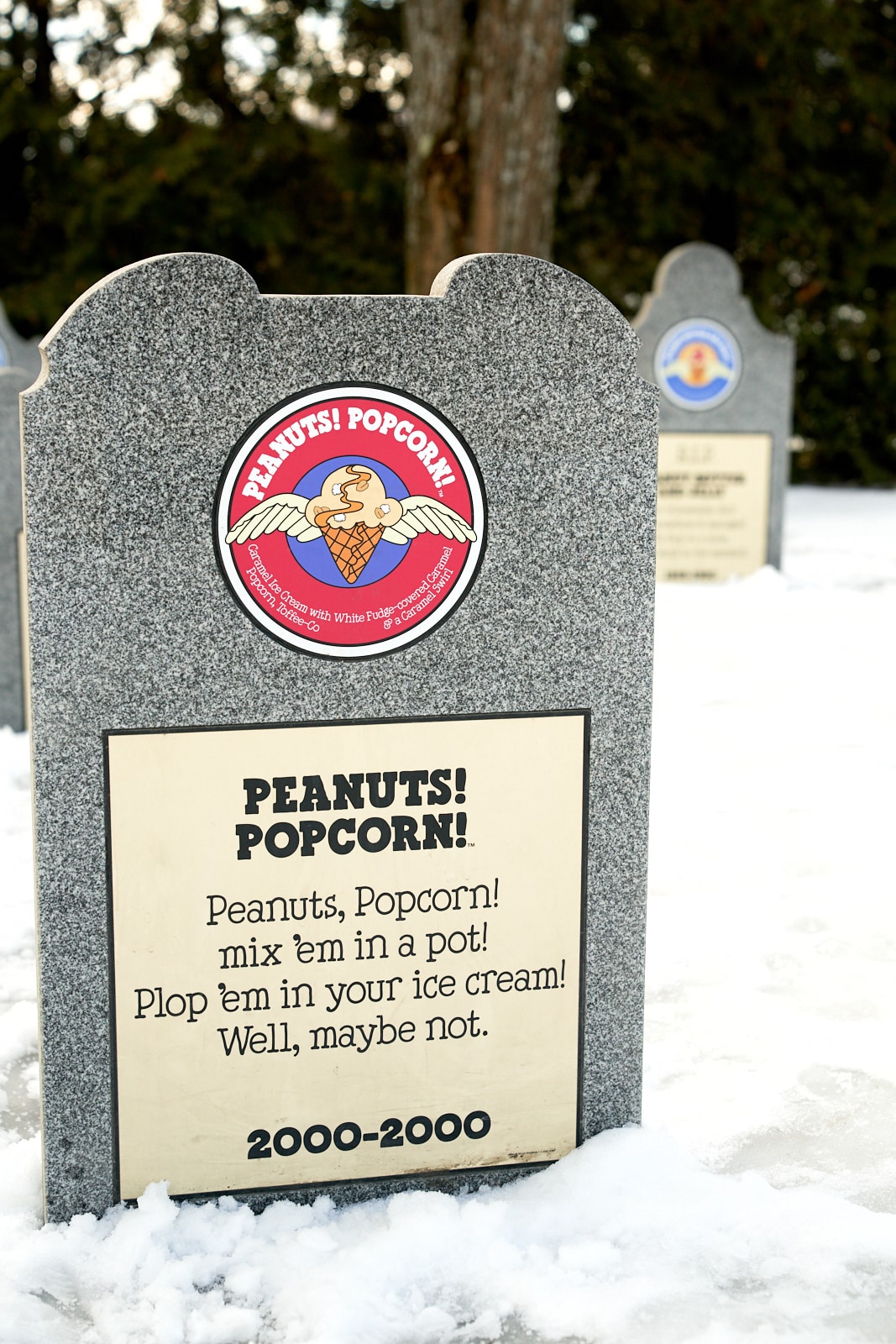 Tributes to gone-but-not-forgotten concoctions can be seen in the Ben and Jerry’s Flavor Graveyard outside its factory in Waterbury.

The Ben & Jerry’s factory in Waterbury isn’t merely a place to witness the intricacies of ice cream production. By the time you reach the Flavo-Room, where the sample du jour might be a rare, not-sold-in-stores creation like Caramel Apple, you’ll appreciate each scoop’s deeply Vermont roots. More than 40 years after two junior high buddies invested $5 in an ice cream making correspondence course, the global brand they launched from a Burlington gas station remains far-out, folksy, and socially committed. The gee-whiz factory tour, fully stocked gift shop, and fascinating “Flavor Graveyard” combine to make this a can’t-miss destination.

The master granite carvers who migrated from Italy to Barre, Vermont, created monuments here that are as much works of sculptural grandeur as they are memorials. Founded in 1895 in the so-called “Granite Capital of the World,” Hope Cemetery includes a number of graves of the sculptors themselves — with some tombstones carved by the very artists who now lie beneath them. 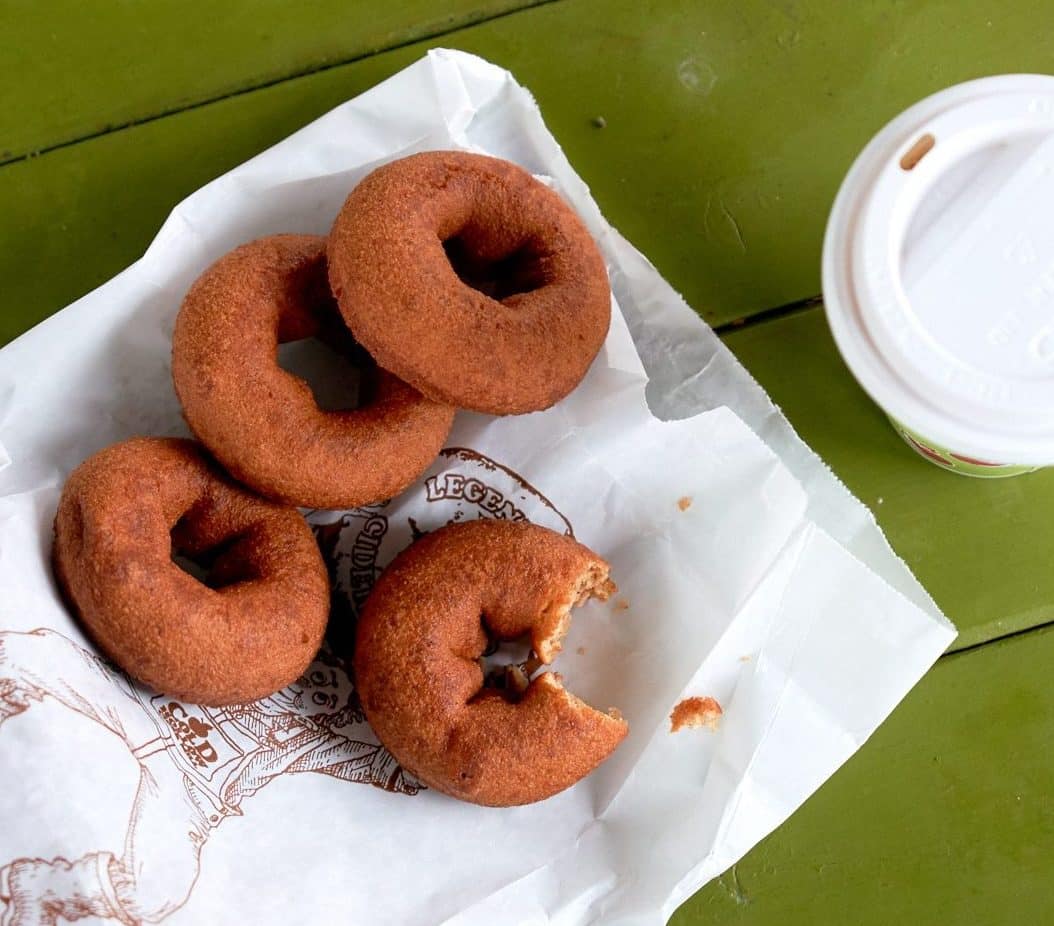 It’s the fall-iest of New England fall outings: You park in a grassy lot, hop on a wagon, and ride out past rows of McIntosh, Honeycrisp, Cortland, and, ideally, a few regional heirlooms, like Roxbury Russet and Rhode Island Greening. Fill your bucket or bag (remembering to twist, not pull, the apples off), pay the per-pound price, and reward yourself with a cinnamon-spiced cider doughnut fresh from the fryer or a gallon of just-pressed cider.

While there’s no shortage of places at which to load up on apples, cider, and/or cider doughnuts in Vermont, here are a few picks to get you started:

What would you add to the list of the best things to do in Vermont? Let us know in the comments below!

And see more great things to do in Vermont (and beyond) in “The 85 Best Things to Do in New England.”

The post 10 Best Things to Do in Vermont appeared first on New England Today.

Social-Media Algorithms Rule How We See the World. That Needs to Change.