The ocean can be rough and moody, but lakes are reliably soothing. So the next time you’re ready to load your car up with beach gear, consider heading to a lake beach for freshwater therapy. These New England lake beaches are standouts for their refreshingly clear water, beautiful surroundings, and blissful remoteness. 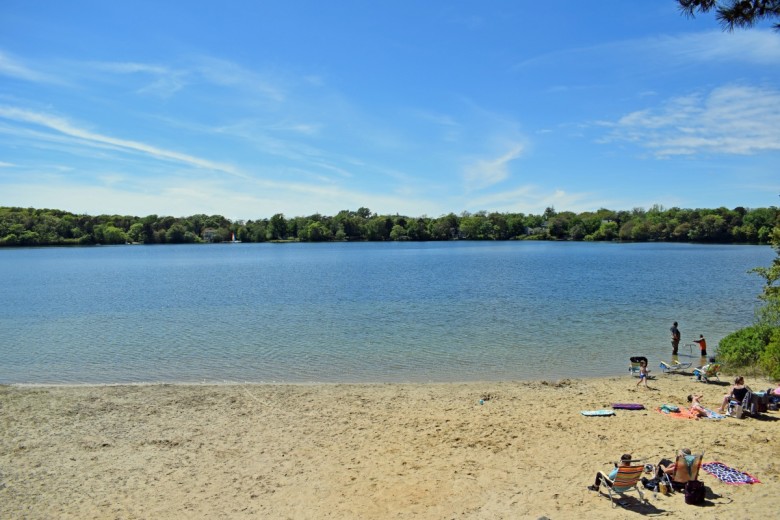 You’re never far from salt water on Cape Cod, but there’s plenty of freshwater to be found, too, if you know where to look, too. Princess Beach — fairest of all the Cape’s pond and lake beaches — is tucked away in the woods. Before you descend wooden stairs to claim a lakeside spot, detour off Scargo Hill Road and climb Scargo Tower, built in 1901. While you won’t find an imprisoned long-haired princess at the top of the 30-foot cobblestone column’s winding stairs, you will see how near Scargo Lake is to Cape Cod Bay, and, if skies are clear, your view will stretch all the way to Provincetown and Plymouth. After surveying the realm, retreat to this quiet little lake beach to fish, swim, float, read, or dream.

The reflection of shoreline pines tints Echo Lake an enchanting shade of emerald. Yet it’s the imposing granite face of Cathedral Ledge, opposite the beach, that will hold your rapt gaze from the moment you unfurl your blanket. Sculpted by glaciers — just like this shallow mountain pool — the ledge challenges climbers and hikers. Meanwhile, the easy mile-long walk around this prehistoric lake’s perimeter is enough exertion to earn a refreshing dip and a hearty cookout. Besides, there’s an easier way to reach the summit of this 700-foot natural skyscraper: Drive Cathedral Ledge Road to the end for aerial views of Echo Lake and the surrounding White Mountains.

With a rippled-glass surface and forested hills on its shores, Lake Wononscopomuc in far western Connecticut is as lovely to behold as it is difficult to pronounce. This town-owned beach on the lake’s north shore is open to the public, although with little to advertise its presence, it’s rarely crowded. Little swimmers have their own shallow area for testing the waters; reward their progress with ice cream from the little store, which also conveniently sells bait. Each year trophy fish are plucked from Wononscopomuc, Connecticut’s deepest lake, so if you rent a boat or cast from the stone jetty near the beach, you might just reel in a largemouth bass, trout, or chain pickerel to remember.

The 3,187-foot peak that gives Mount Blue State Park its name stands boldly in view from the park’s sandy strip of beach on Webb Lake. Swim here, and you’ll marvel at how crystalline the shallow, sun-warmed water appears. No surprise there — you’re in the midst of one of Maine’s largest state parks, an 8,000-acre wilderness. Although you may not see them, there are likely moose cooling off, too, somewhere on this 5-mile-long lake. Bring your bikes, rent kayaks, and visit the hands-on nature center. You can even reserve a campsite steps from the beach, and fall asleep listening to the loons’ distinctive lullaby.

There are lifeguards at the pale sand beach at the north end of Vermont’s most majestic lake, but Mount Pisgah and Mount Hor — forested twin cliffs that hover over Willoughby’s east and west banks — are the true guardians of this so-called “Lucerne of America.” Divers love the crystal-clear water, and you will, too, as you wade out from shore, mesmerized by how long the bottom remains visible. Fed by underground springs, the lake water is decidedly cool, but be brave and take the plunge. As Robert Frost wrote in a poem inspired by this “pretty sheet of water”: “The best way out is always through.” (Note: There is a nice beach at the southern end, too — just know that it sometimes draws nudists with its clothing-optional cove.)

What is your favorite lake beach to visit?