New England was built along the sea — and in many respects, it was built by the sea. We marvel at its beauty and partake of its bounty, and many have become wealthy navigating its waters. But life on the sea is fraught with danger, too. Hundreds of ships and many lives have been lost off the New England coast. Here are a few of the region’s most famous shipwrecks. 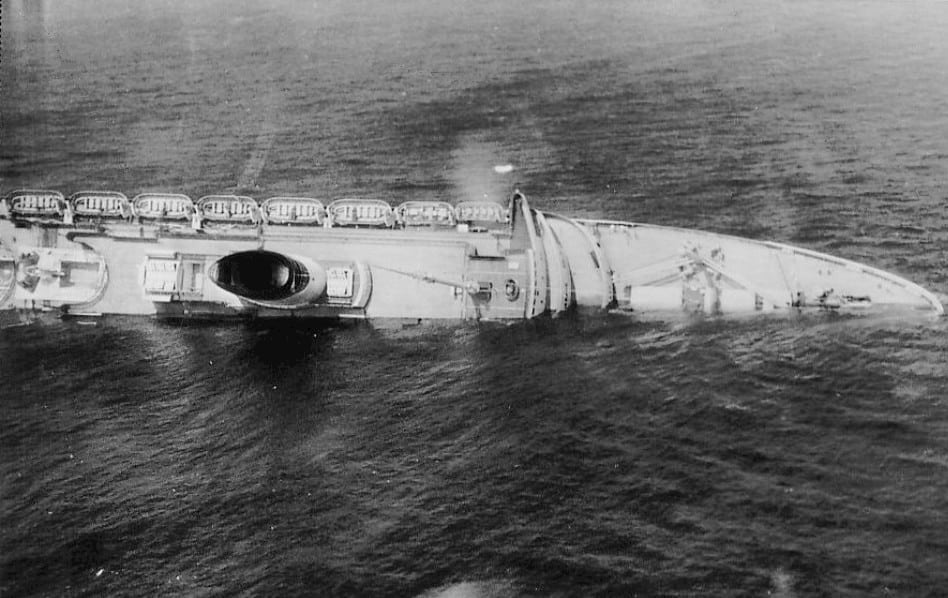 After a collision with the Swedish ship Stockholm, the Andrea Doria slowly sinks off the coast of Nantucket in July 1956.

The 697-foot Andrea Doria was a superstar ship of the 1950s. Decked out in luxurious furnishings and sporting an unprecedented three outdoor swimming pools (one for each passenger class), it was a premier luxury liner of its day. Launched in 1953, the ship had completed 100 transatlantic voyages by July 25, 1956, when human error set it on a collision course with the icebreaker bow of the Stockholm off the coast of Nantucket, Massachusetts. The impact left the Andrea Doria taking on water and listing so sharply to the side that half of its lifeboats were inaccessible. Other ships in the vicinity responded quickly and were able to rescue all but 46 of the approximately 1,700 people on board (five people aboard the Stockholm were also killed). Just after 10 o’clock the next morning, the giant ship disappeared into the sea.

The Andrea Doria now sits in 240 feet of water and has become a popular, if perilous, diving destination. Since it settled to the ocean floor, the ship has claimed the lives of at least 16 divers. In a 1984 TV event, the safe used by first-class passengers yielded not the multimillion-dollar haul of valuables that some had predicted, but rather a small cache of mostly paper currency. 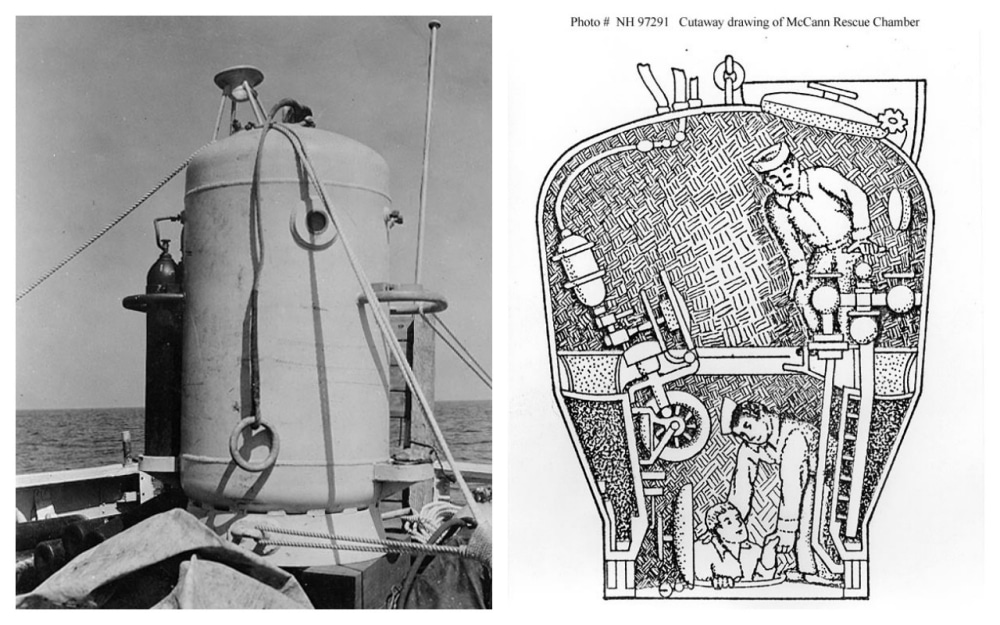 U.S. Navy Historical Center images show a 1939 McCann rescue chamber similar to the one used in the U.S.S. Squalus rescue, and a cutaway illustration of the space inside.

U.S.S. Squalus: The Greatest Submarine Rescue of All Time

When the Navy submarine U.S.S. Squalus disappeared beneath the waves off the New Hampshire coast on the morning of May 23, 1939, all was going well. The submarine had already successfully navigated 18 test missions, and the 59 men aboard saw no signs that the 19th would be any different. Four miles beyond the Isles of Shoals, the Squalus had descended to a depth of about 60 feet when water started flooding through the main air induction valve. By the time the crew was able to close the valve and seal off the flooded portions of the sub, 24 men were lost. The Squalus had taken on too much weight, and it slowly descended to the ocean floor.

In the short history of the U.S. Navy submarine fleet, no rescue attempt in water deeper than 20 feet had ever succeeded. The Squalus was resting at a depth of 240 feet. With the clock ticking, the Navy deployed for the first time a type of diving bell called a McCann rescue chamber. Ten feet high and seven feet wide, the two-chambered vessel could be attached to the sub with a rubber seal and take on passengers. The process was slow, but over the course of several hours the diving bell made three successful trips. On its fourth and final ascent, however, the diving bell’s guide wire failed and it had to be lowered to the ocean floor while repairs were made. Two divers were nearly lost in the process, but after four terrifying hours the diving bell was reconnected and the final survivors were pulled up.

Unlike the other famous shipwrecks on this list, the Squalus would sail again. The submarine was raised on September 13, 1939. Repaired and recommissioned as the Sailfish, it went on to sink seven ships during World War II. The sub’s conning tower is on permanent display at the Portsmouth Naval Shipyard. 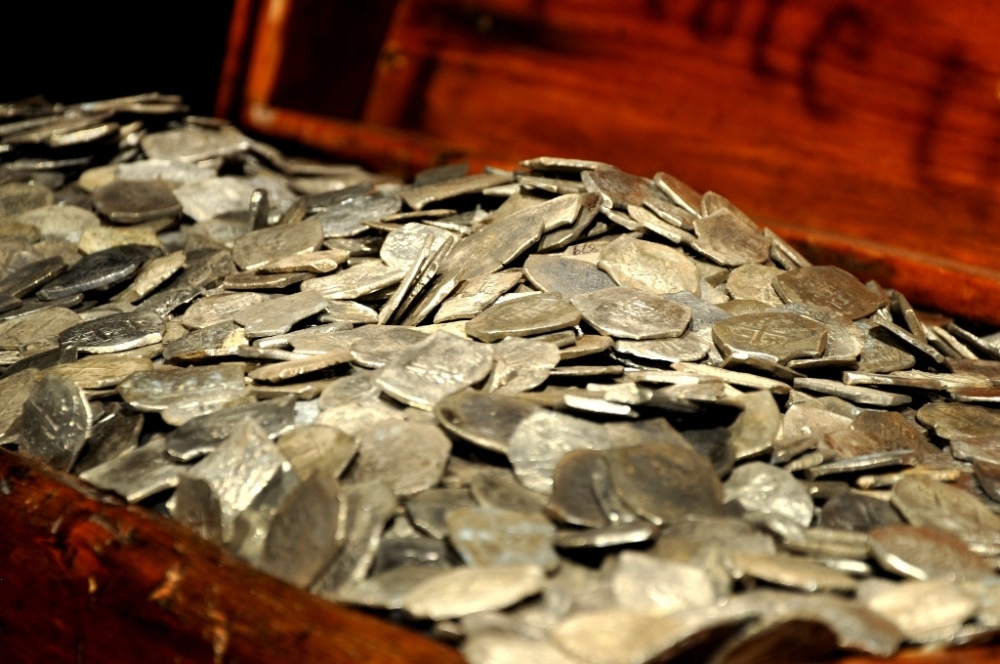 Gold coins recovered from the 1717 shipwreck of the pirate ship Whydah, off the coast of what is now Wellfleet, Massachusetts.

Whydah: A Relic of the Pirate Era

The 110-foot Whydah was commissioned by a London slave merchant in 1715. On its maiden voyage in 1716, the three-masted galley ship sailed first to Africa and then to the Caribbean, trading both goods and humans along the way. In February 1717, loaded up for its return to England, the Whydah was captured near Cuba by “Black Sam” Bellamy, who made it the flagship of his pirate fleet. Bellamy sailed the Whydah up the colonial American coast, capturing ships as he went. On April 26, 1717, the Whydah was caught in a violent storm and slammed stern-first into a sandbar about 500 feet from the shore of what is today Wellfleet, Massachusetts. Although they were within sight of land, only two of the Whydah’s crew survived. At the time of the crash, the ship was rumored to be carrying the accumulated treasure of more than 50 looted vessels.

The Whydah and its treasure eluded discovery until 1984, when the wreck was located submerged under 14 feet of water and buried in about five feet of sand. In the years since, more than 200,000 artifacts have been recovered from the wreckage. A museum dedicated to the Whydah, the only fully authenticated Golden Age pirate shipwreck ever discovered and one of New England’s most famous shipwrecks, opened in 2016. 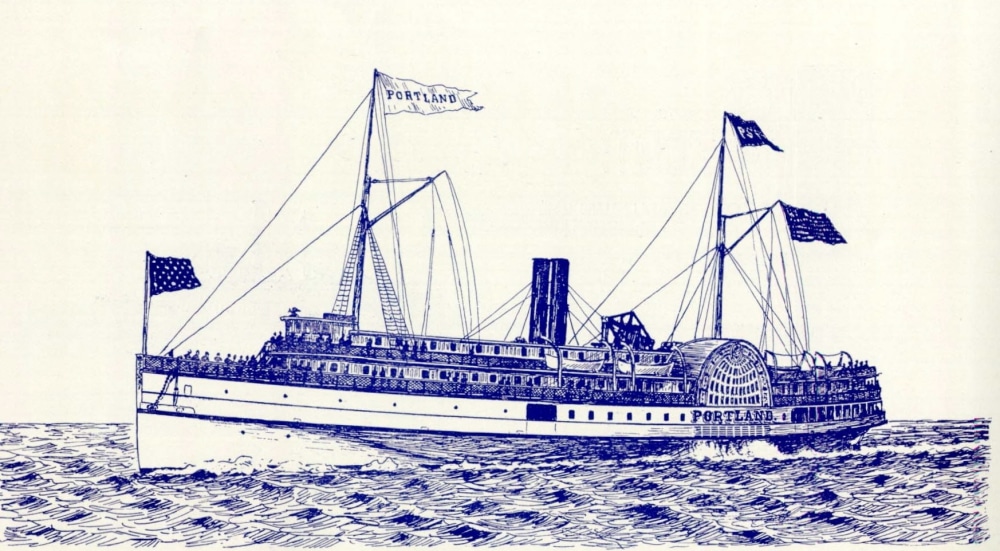 This 1895 illustration of the steamship Portland was drawn by Samuel Ward Stanton in 1895. In 1912, Stanton was among those lost aboard the Titanic.

The side-wheel paddle steamer Portland had provided passenger service between Boston and Portland for nearly a decade following its construction in 1889. It was a sturdy and dependable ship, among the largest and most luxurious in New England at the time. But it proved no match for the wind and waves of the Portland Gale of 1898 (to which it would ultimately lend its name). As the massive blizzard struck on the evening of November 27, 1898, the Portland capsized and sank in the waters off Cape Ann. Since the only known passenger list went down with the ship, no one is certain how many people were on board. There may have been as many as 250, although only 51 bodies were ever recovered. The exact location of the wreckage remained unknown until 1989. In 2008, the first divers reached the wreckage, located 460 feet deep within the federally protected waters of the Stellwagen Bank National Marine Sanctuary. As with a number of other famous shipwrecks, the Portland has been named to the National Register of Historic Places.

Andrea Gail: The Tragedy of the Perfect Storm

Of all New England’s famous shipwrecks, the private fishing boat Andrea Gail has become perhaps the best known, thanks to Sebastian Junger’s best-selling book The Perfect Storm and the movie of the same name. It departed from Gloucester, Massachusetts, on September 20, 1991, bound for Newfoundland fishing grounds. But when the fishing there proved poor, the 72-foot boat and its six-person crew headed east toward a shallow area known as the Flemish Cap. Concerned that a faltering ice machine would cause the catch to spoil, the captain set course for home on October 26, despite forecasts of ominous weather ahead as Hurricane Grace moved north toward a low-pressure system pushing south from Canada. At about 6 p.m. on October 28, the Andrea Gail contacted sister ship the Hannah Boden (captained by Linda Greenlaw), stating that it was about 160 miles east of Nova Scotia’s Sable Island and experiencing 30-foot waves and 90 mph winds. When the Andrea Gail failed to return to port on October 30, a search that would eventually cover 186,000 square miles was launched. On November 6, the boat’s emergency beacon washed ashore on Sable Island. A smattering of other wreckage was found, but the ship and its crew remain lost at sea.

Do you know stories of famous shipwrecks in New England?

SEE MORE FAMOUS SHIPWRECKS:
A Fatal Mistake | The Sinking of the El Faro
Titanic Survivor Story | Going Down with the Titanic in Third Class

Coronavirus World Map: Tracking The Spread Of The Outbreak