Some of the best antique shows in the world can be found right here in New England. In fact, if you happen to be a fan of cool old stuff, there are few parts of the country that will feed your addiction better than the great Northeast. We love our antique shops, our flea markets and yard sales, and even our consignment shops. We also like fairs and, really, all manner of celebrations. So what do you get when you combine the best elements of antique shops and flea markets with a good old country fair? Why, an antique show, of course. We’ve made our picks for the best New England antique shows in all six states. Have a look, and mark your calendar! 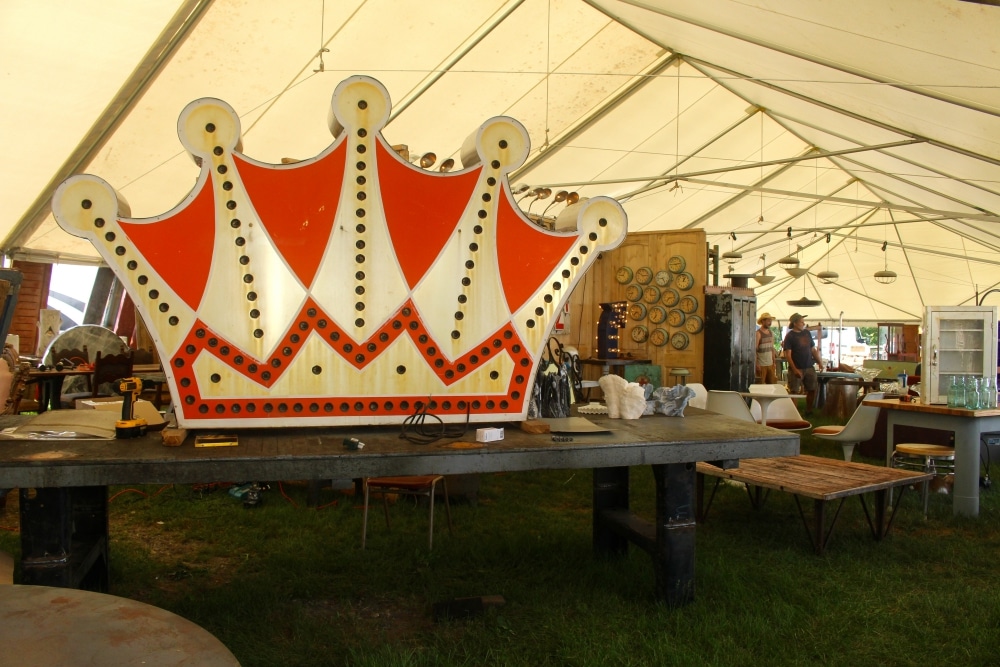 The thrice-annual antique supershows at Brimfield are always loaded with surprising finds.

The granddaddy of them all (as arguably one of the best antique shows in the country, never mind New England), Brimfield has roots that stretch back to May 1960, when Connecticut auctioneer Gordon Reid and his wife, Madelyn, attracted about 300 people to their first outdoor show along Route 20 in Brimfield, Massachusetts. From those humble beginnings has grown the largest and best-known outdoor antique show in the country, now running for three six-day stretches each year, in May, July, and September. The popularity of online sales has calmed the crowds at Brimfield just a bit, but you’ll still find seemingly endless surprises flanking about a half mile of highway — enough to attract thousands of dealers and boost the town’s population from about 3,000 on an average day to a temporary 250,000. If you haven’t been to Brimfield, trust us: You haven’t seen anything like it.

Founded in 1979, this event is one of the best New England antique shows for holiday shoppers: It’s now being held in December, after a long run as a January event. Each year, more than 160 dealers from at least 10 states convene at the Shriners Auditorium in Wilmington to showcase furniture, ceramics and pottery, jewelry, folk art, and all manner of antiques, from the truly ancient to mid-century gems, with plenty to appeal to collectors and dabblers alike. 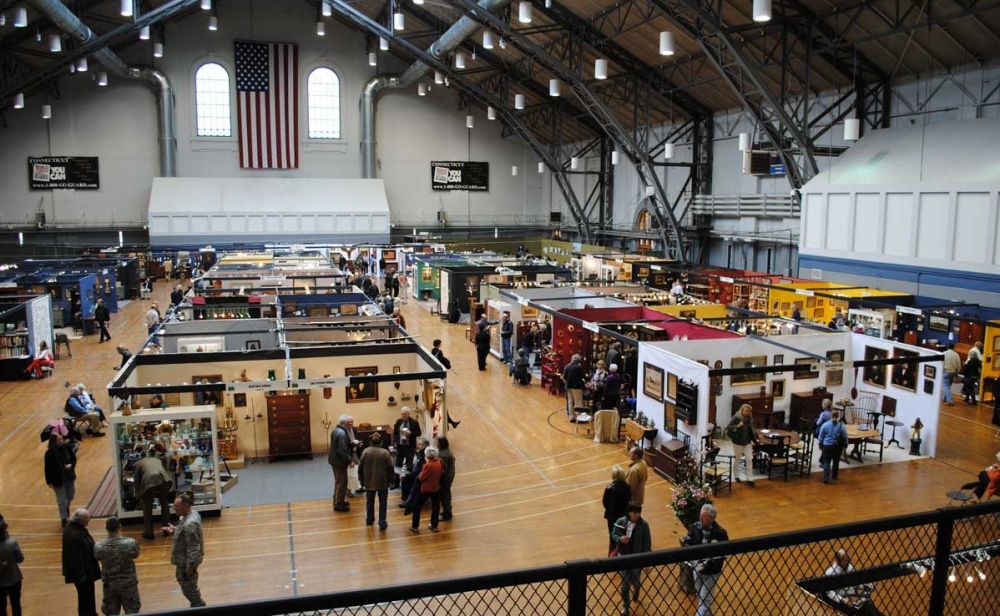 Each year, the Hartford Armory is transformed into a treasure hunters’ paradise by the Connecticut Spring Antiques Show.

Shake off the winter chill at this premier spring show, held each March at the Hartford Armory in Hartford, Connecticut. Founded in 1973 by Frances Walker Phipps and Betty Forbes, this annual gathering has become one of the top New England antique shows for dealers and collectors of early American furniture and decorative arts. If you have a passion for Americana, you’ll be hard-pressed to find a better venue at which to see, learn about, and purchase high-quality items.

Launched in the early 1980s and assuming the mantle as the biggest annual antique show in Maine soon after, the festival attracts dealers from across the U.S. (one recent show had 15 states represented). For three days each August, collectors and dealers transform the fairgrounds in Union into a wonderland of collectibles and antiques that is touted as having “something for everyone.” The show goes on no matter the weather, with dealers set up both inside and outdoors, under tents.

For three days in August, the New Hampshire Antiques Dealers Association turns the Radisson Hotel in Manchester into an antiquer’s dream destination. More than 60 dealers representing some 15 states return each year to share their latest finds. From folk art to nautical items, books, furniture, glassware, decoys ornaments, and more, you’ll find a surprise in every booth. 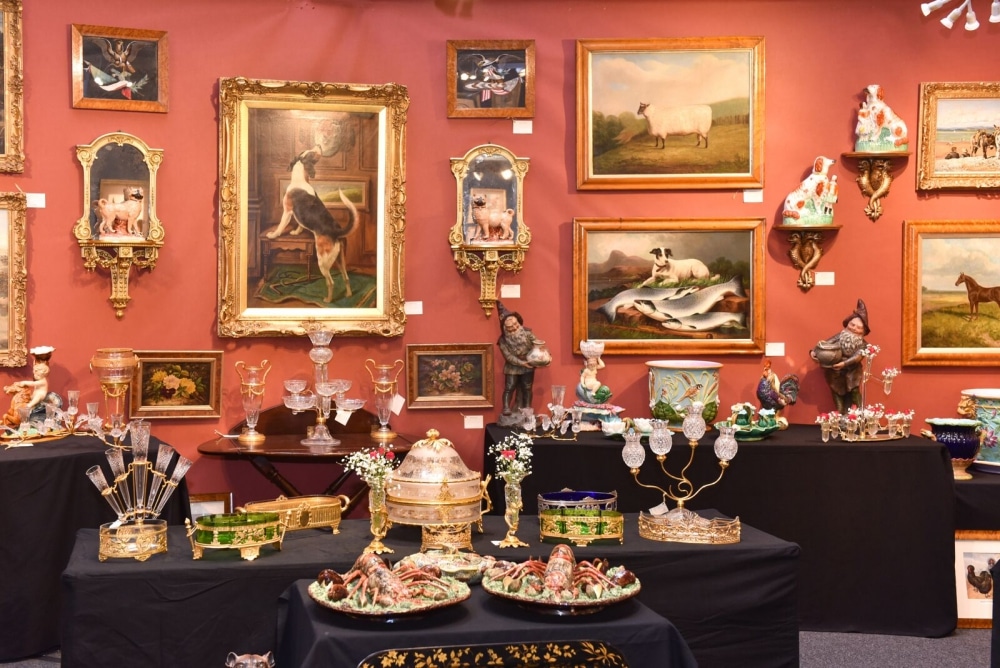 A primary fundraiser for the Newport Historical Society and the Boys & Girls Clubs of Newport County, the Newport Antiques Show has been rebranded as The Newport Show, but the collection of antiques and fine art for sale continues to be both eclectic and top notch.

courtesy of The Newport Show

Each July, the ice rink at St. George’s School in Middletown, Rhode Island, takes an elegant turn as host to popular antiques extravaganza the Newport Show. This weekend event features more than 40 dealers in fine arts, furniture, jewelry and vintage accessories, and photographs, with plenty of surprises thrown in as well. Since the show started in 2007, it has raised well over $2 million for its two beneficiaries, the Newport Historical Society and the Boys & Girls Clubs of Newport County.

As leaf-peeping season winds down in late October, a pair of shows at the Champlain Valley Exposition in Essex Junction, Vermont, come together to serve up some cheer. With the Antique Expo and the Fall Essex Craft and Fine Art Show running on the same weekend, and with your ticket for one also gaining you admission to the other, you’ll be treated to three days of handmade goods, antiques, vintage collectibles, and art.

What are your favorite New England antique shows?

Johnson & Johnson wants to test its vaccine by September

New York's Cuomo pleads for doctors, nurses from other states to aid its hospitals