To complement “Walks Worth Their Salt,” the 2017 Yankee Magazine feature celebrating the region’s many coastal strolls, here are seven more of our favorite New England ocean walk ideas. 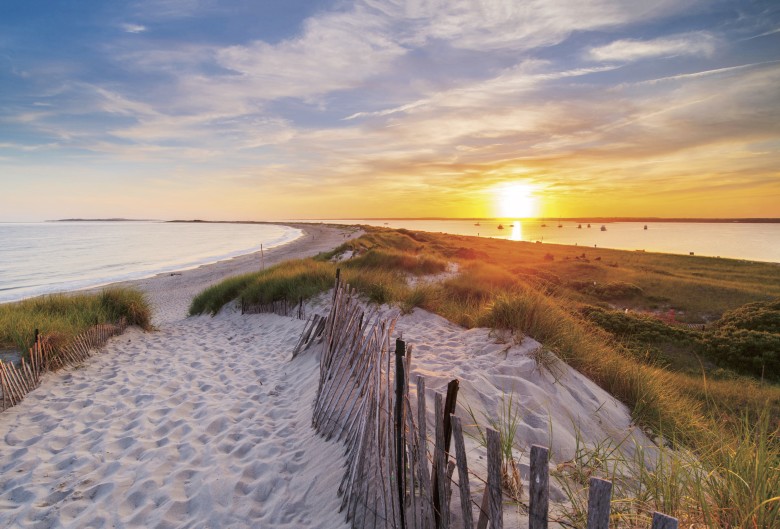 A Respite from the Crowds. Today I’m pursuing the gentle curve of a beach that stretches to the horizon, somewhere I can get lost in the beat of water and the warmth of grainy sand in this tiny state that asserts itself like a terrier, claiming the entire ocean in its nickname. Napatree Point Conservation Area, in the coastal village of Watch Hill, is spoken of reverently as an insider’s favorite. One of the most beautiful and least crowded beach spots in Rhode Island, it is 1½ miles of arcing coastline, with skinny paths leading off through dune grass, taking you from surf to coves, luring hikers and bird watchers. The beach hugs the Atlantic, with Little Narragansett Bay shining on the north side of the barrier that protects the dunes. After about a mile, you come to the ruins of Fort Mansfield, all that’s left of a 1901 fortification that once protected Long Island Sound and New York City. Keep going and you’ll reach the tip of the point. Plan it for sunset, and see the sun melt into the sea. — Annie Graves

Solitude by the Seashore. It was my husband, who worked for the trails division of Cape Cod National Seashore, who told me about the special places that the public isn’t aware of. Trails that aren’t included in park literature but are perfectly permissible to walk, and all with legal parking areas. Trails that lead to the most exceptional beaches I’ve ever seen on the Cape. Trails like Snail Road.

On Route 6 north, toward Provincetown, you’ll come to an intersection with a sign saying “To Route 6A, Provincetown.” Leave your car at the small parking area on the right, and start walking. The trek along Snail Road (the only trail here, but it has no sign) is roughly 1½ miles each way — it’s difficult to say exactly, because the dunes are high and the sand is soft.

The view from the summit blew me away. In front of me was the Atlantic; behind me was Cape Cod Bay and the peak of Race Point Light; to the right I could see Pilgrim Monument, as well as miles of rolling dunes. It reminded me of an Edward Hopper painting. I saw only one person on my walk, and the beach at the end of the trail was empty. — Jennifer Kain DeFoe

The Best Walk in Newport. Long before tourists discovered Newport’s famed Cliff Walk, deer and Native Americans and, later, fishermen made their way along the tight path above the bay as they navigated from one place to another. When some of the nation’s wealthiest families built their mansions here in the 19th century, they could stroll out onto their back lawns to view the water and, if they wished, follow the trail to see what their neighbors were up to. Today, the 3½-mile Cliff Walk, New England’s first National Recreation Trail, serves as nature’s counterbalance to the opulence that put Newport on the map. Much of the path is moderate; some is even easy. Certain stretches do require basic caution, though, since erosion has taken a toll, and in spots wet rocks require care. The walk is kept open to the public by the constant efforts of its caretakers. It comes with gifts bestowed equally to all: waves scudding off rocks, sailboats skimming the water, fine architecture to ogle, and camaraderie with fellow walkers who, like you, feel lucky to be there. — Mel Allen 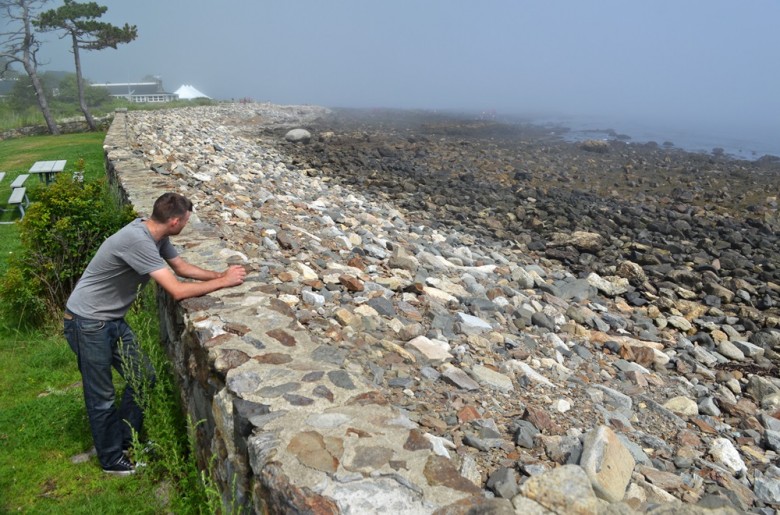 The Loop That Leads You Home. There’s something especially satisfying about a loop walk, knowing that the trail wending its way through the landscape will lead you home again. The loop walk in Odiorne State Park, just south of Portsmouth, New Hampshire, in the village of Rye, takes visitors through the largest swath of undeveloped coast in the state. After exploring the Seacoast Science Center, where nifty exhibits include a hands-on tide pool tank, you can hit the trail and wander past ocean, marsh, and forest, with the bonus of spotting remnants of the era when the site was used for coastal defenses in World War II. — Mel Allen

Exploring a ‘Last Great Place’. A spectrum of sounds greets the walker on one of the Block Island Greenway trails: in the foreground, the tin-whistle song of a yellow warbler; in the middle range, the soft push of a breeze passing through a canopy of trees and bayberry; beneath it all, the low-frequency thrum of waves crashing in the distance. The woods give way to coastal shrubbery — some of the most exemplary on the East Coast — and the walker alights upon a deserted beach. This is merely one potential scenario in a trail system that comprises 28 miles on a 10-square-mile island, a dozen miles off Rhode Island’s coast, that the Nature Conservancy called a “Last Great Place.” The trails crisscross the island, from the tangle of paths known as “The Maze” at Clay Head to the natural amphitheater of Rodman’s Hollow and down to the remote southern beach, Black Rock — which means you can traverse most of the island, north to south, east to west, entirely via the Greenway network. — Peter Voskamp 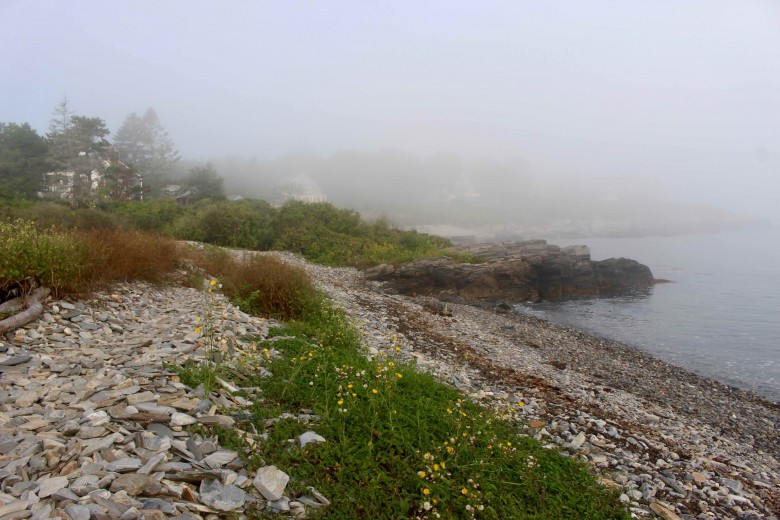 A Masterpiece by the Ocean. I stand alone on a boulder-strewn Maine shoreline. The waves thrash against the rocks. The sound is almost deafening. They call this part of Prouts Neck “Cannon Rock.” I’m lost in some Winslow Homer canvas, man facing unforgiving nature. There are few American artists in whose footsteps you can walk and still see the same unblemished scenery to which the painter devoted himself. Indeed, it’s not a stretch to call Homer the American Monet, and the rocks of Prouts Neck our lily pads. Less than a half-hour drive south of Portland, this little peninsula was the lens through which Homer observed powerful gales, dense fog, and nor’easters. When the moment happened, he’d record in unsentimental fashion the small dinghy stuck on a wave or engulfed by the sea, or the layer of white froth slamming against Cannon Rock.

Thanks to Homer’s brother Charles, who donated this path to the public in 1879, you can stroll the same route that the artist traveled almost every day with his terrier, Sam. Halfway along, the trail ascends. The jagged shoreline, rising to a crescendo, was the inspiration for High Cliff, Coast of Maine. Heading back down, you reach Kettle Cove, where Homer would create his last work, Driftwood. As a final gesture, after finishing Driftwood, Homer scrambled the paints on his palette to officially declare his retirement. Today, the Prouts Neck Cliff Walk is accessible to all, artists and nonartists alike, a glorious gift to art lovers, who can stroll straight into Homer’s masterworks. — Steve Jermanok

SEE MORE: Things to Do in Scarborough, ME | Coastal Weekend Getaways

From the Forest to the Sea. It’s the series of contrasts in Menemsha Hills that makes it one of my top walking trails: wetlands to dune grass; sea level to hills; thick forest to wide-open horizon. This Trustees of Reservations property on Martha’s Vineyard is just big enough (211 acres) to thin out the crowds, and its trail is just long enough (3.2 miles) to deter short-strollers. My niece skipped along a path crowded by pitch pine, under maples, beeches, and oaks, and up Prospect Hill, then down into a bosky dell that felt like New Zealand. We rounded a bend and out into the light we came, up to a bluff overlooking hills of goldenrod and beach plums, rolling down to the sea, where in the distance the Elizabeth Islands spread out in a line. We climbed down stairs to a beach where once, long ago, Menemsha’s brickworks stood; you’ll still find bricks scattered among the stones. We ate apples and peanuts, let the water spray our faces, smiled at two people sharing a seat on a boulder. Then we headed up the stairs through incoming fog, back through the enchanted forest, and home to tell our families about our magical day, right in our own backyard. — Jamie Stringfellow

Do you have a favorite New England ocean walk?

How Karen became a meme, and what real-life Karens think about it