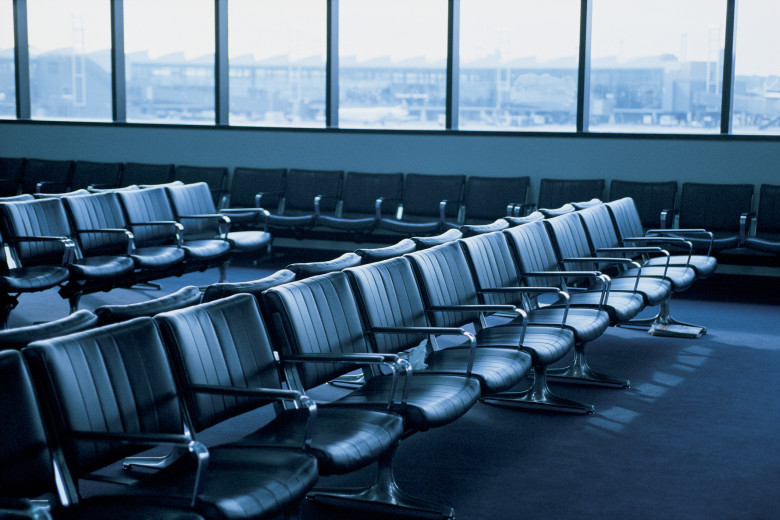 After all those years working the dawn flights at Logan, and then for 16 more at Portland, Mike Tuohey still awakens by 4 a.m., searching for first light over the river that cuts through the marsh. He loves the stillness. The house he shares with his second wife, a flight attendant, rises from the tall grasses like a handsome boat; from its windows, he watches seabirds dart over the wildlife preserve that stretches to the ocean. This is when everything seems right. The promise of a day ahead — working his land, coaxing a garden from the marsh. “It’s where I find peace,” he says.

He’s 60, and until the airline downsized two years ago, he’d been with US Airways (formerly Allegheny Airlines) since he was 21, just out of the Army. “I was going to work until I died at that counter,” he says. “I loved my work.” He grew up poor in Roxbury, Massachusetts, an Irish-Italian kid who left school at 16, full of attitude and street smarts. “I’m the first in my family to own a house,” he says with pride. “I had five brothers and my father had five brothers, and I was the first.”

Each day at his home in Scarborough, Maine, begins the same: At dawn he walks down a dirt road to collect the Boston Globe from his mailbox. He walks back. He flicks on CNN and sips coffee. He lights a Winston, the first of many. This day promises to be gorgeous — warm, blue sky, sea breezes.

He’s expecting a visitor, a reporter, at noon who will ask about a day five years ago, a day Mike Tuohey remembers began so beautifully. “The kind of morning when you sniff the air and think, ‘Oh, it’s getting cooler now.’ A spectacular morning. The sky the bluest of blues. A day so perfect you’d never want to be anywhere else.”

That morning, September 11, 2001, he drove six miles to the Portland International Jetport. He was dressed smartly in his blue US Airways jacket, crisp white shirt, red and blue tie. His sandy hair and mustache were immaculate, as always. He stood at his usual first-class and preferred passengers post. A slow Tuesday morning at summer’s end. There were flights to Philly, New York, and Pittsburgh; a 19-passenger commuter prop was leaving at 6 a.m. for Boston. It was 5:40, and all the Boston passengers seemed to be on their way upstairs. He told the ticket agent alongside him that he was going to take a smoke break, but then he saw two men walking toward his counter.

That’s what his visitor will talk to him about. The same as CNN, Good Morning America, a National Geographic documentary crew, and Oprah. They all came calling after his name appeared in declassified documents following the release of The 9/11 Commission Report. He talked to everyone, and then he just had to stop. “I thought I could put it behind me,” he says. “I thought I could just grab it and confront it. I figured, the more I confront it, I won’t let it bother me.” He pauses. “I was wrong. There’s never a day without thinking about that day. It’s just there. It’s in your blood, your system. Your feelings. It’s like the sky — always there. It’s like you know your name. How do you try and not know your name?”

In the early afternoon, Mike Tuohey sits with his visitor in his sun-soaked kitchen. “I motioned them over,” he says. “These guys showed up 20 minutes prior. Back then, I didn’t think anything of it. Back then, it was all set up for convenience of passengers.” They checked two bags, carrying two more.

“I never liked the system where you give a boarding pass to a follow-up flight. I worked for US Airways, not American. So I just gave them a boarding pass from here to Boston.”

“Everyone knows the pictures of the guy now,” Tuohey continues. “That cold, hard picture. Well that is a warm and cuddly look compared to what I saw. My stomach literally turned over when Atta looked at me. I thought, ‘Why is this man so angry?’ He was looking at me sideways, and all this anger and contempt came through. I thought, ‘If this guy doesn’t look like an Arab terrorist, nobody does.’ I’ve checked in hundreds of thousands of people from all over the world, and he’s the only one who made me have that reaction. I remember telling myself, ‘Stop being a jerk. These are Arab businessmen.’ Those were the exact words that went through my head.”

Tuohey stands up and presses his face right beside his visitor’s. “We locked eyes,” he says. “We were this close. And I said, ‘Mr. Atta, if you don’t go now, you will miss your plane.’”

Atta and Omari made their connection in Boston, and at 8:46 a.m., Atta, a trained pilot, steered American Airlines Flight 11 into the North Tower of the World Trade Center, beginning a day like no other in American history. Investigators later concluded that Atta, the acknowledged leader of the September 11 terrorist attacks, flew from Maine because he did not want the 10 hijackers who would leave from Boston arriving at the airport together (United Flight 175, which struck the South Tower, departed from Logan shortly after).

In his kitchen, Tuohey pauses. Inhales, exhales smoke. His eyes well with tears, and for the next minute he cannot speak. He gathers himself. “Why didn’t I recognize the devil? I did recognize him. But I didn’t stop him.

“This is the most painful thing. I’ve always trusted my instincts. Always. But you have to know what it was like then. If you respond and are wrong, you get screwed.” He lays out a different scenario for his visitor. A what-if. This time he trusts his gut. He calls security. The men miss their flight. “Suppose they had been just businessmen. They don’t get to L.A. Maybe lose out on a multimillion-dollar business deal. They sue our airline for millions. We also get fined $1.5 million for racial profiling. I’d have put the whole company in jeopardy.”

Everyone has told Tuohey he was not to blame. But still. He had lived by his wits all his life, had made his way being street-smart. “My whole being told me something was wrong, and I could not do anything about it.” He knows the fate of others whose lives brushed so briefly against Atta’s. The manager of the hotel in South Portland where the two men stayed on September 10 — her life unraveled. She lost her job, and told a reporter she knew she’d never be the same. Oprah Winfrey, with Tuohey as her studio guest, told 20 million viewers that a woman who’d worked at American Airlines in Boston had later killed herself. Earlier, Oprah’s producer had told Tuohey she had a message from the woman’s husband: “It’s not your fault.”

“When she said that,” Tuohey says, “it felt like a stone was lifted from my heart.”

Some days, anger kicks in. Anger he knows he’s shoved inside, only to have it dig at him until, without warning, he starts sobbing so deeply he cannot breathe. At those times, he calls the friends he grew up with and they say, “What’s wrong with you? What the f— is wrong? It’s not your fault!”

He talks now about the anger. About all he learned in the years after. About a briefing to the president on August 6, 2001. “It was all there,” Tuohey says. “Osama bin Laden. Hijackings. Buildings in New York City. These weren’t dots they had to connect. These were potholes. If just those words — hijackings, terrorists — had come down to us, we’d have gone to level 3 security. Now here I am. I have two young Arabic men in front of me. One-way tickets, checking in just minutes before departure. At level 3, I would have been required to notify security. Their bags would have been opened. What we saw would have set off suspicions: a pilot’s uniform, a video on flying jets. Airline pilots do not buy $2,400 first-class tickets. Airline pilots are the cheapest people on earth. Right there, we would have known something was wrong. This was preventable.”

The FBI talked with Tuohey long into the evening on September 11. He asked them to keep his name out of the newspapers. A few days later, they came to his house with photos of all 19 hijackers. They asked him if he could point to the two he checked in. “It took me 30 seconds,” he says, “to find Atta.”

In the days following the attack, Tuohey went back to his ticket counter, carried on. He cried in the days after September 11, but so did everyone, and he convinced himself he was OK. Then, in the summer of 2004, The 9/11 Commission Report went public.

“I just started crying,” he says. “I’d say, ‘Get over it. Get over it.’” He’d be at the mailbox and he’d see Mohamed Atta driving a car. He’d be at The Maine Mall and Atta would be strolling 100 feet ahead. “My heart would pound. My stomach felt like ice,” Tuohey says. “I ran after him…. I knew it wasn’t him, but at that moment it was. I know it sounds bizarre, so I don’t talk about it. I would say to myself, ‘Look, he’s dead.’ But it still scares you. It really hit me when I tried to find an excuse not to go to my mother’s funeral. Just because of the fact that entered my mind — that’s not me. I’d grown afraid to go out. I was afraid to see Atta.”

It’s another morning. The sea breeze ripples the American flag that flies from Mike Tuohey’s front porch. He’s trying to find answers through counseling. He says when you grow up where he did, you don’t talk about problems with strangers; but he thinks — he hopes — he’ll find his way out of this strange world he now finds himself in.

His truck bed is piled high with mulch. He says his wife has only five years more of work and then she will retire. He knows what they’ll do. There is an island chain he knows about, far out in the Indian Ocean. “People who’ve been there tell me the water is so clear, you can look down and see 250 feet,” he says. “That’s where we’ll go.” For now, he will do this: He will watch for birds, he will smell summer wash over the marsh, he will go to a lake deep in northern Maine where he will camp and fish for bass. He will cry, and he says he is crying, too, for the safety that was snatched from everyone that day. And he will dig in the soil and push in seeds of lettuce, tomatoes, corn, and peppers, then wait for them to come to life.

This article first appeared in Yankee Magazine in 2006.

Trump Announces a New Round of Farm Aid in Battleground Wisconsin