For Maureen McDonald, it was love at first sight.

The year was 1975, and she was a teenager from upstate New York visiting a high school friend when she first walked the grounds of the Martha’s Vineyard Camp Meeting Association, aka the Campground. “I had no idea we were going to see these amazing cottages,” McDonald says. “It was all new to me, and I couldn’t believe what I was seeing. The Pink House was always my favorite.”

The Pink House has long been among the most memorable sites (and sights) in this historic neighborhood of rainbow-colored visions. And according to some tellings, the Pink House actually started it all. 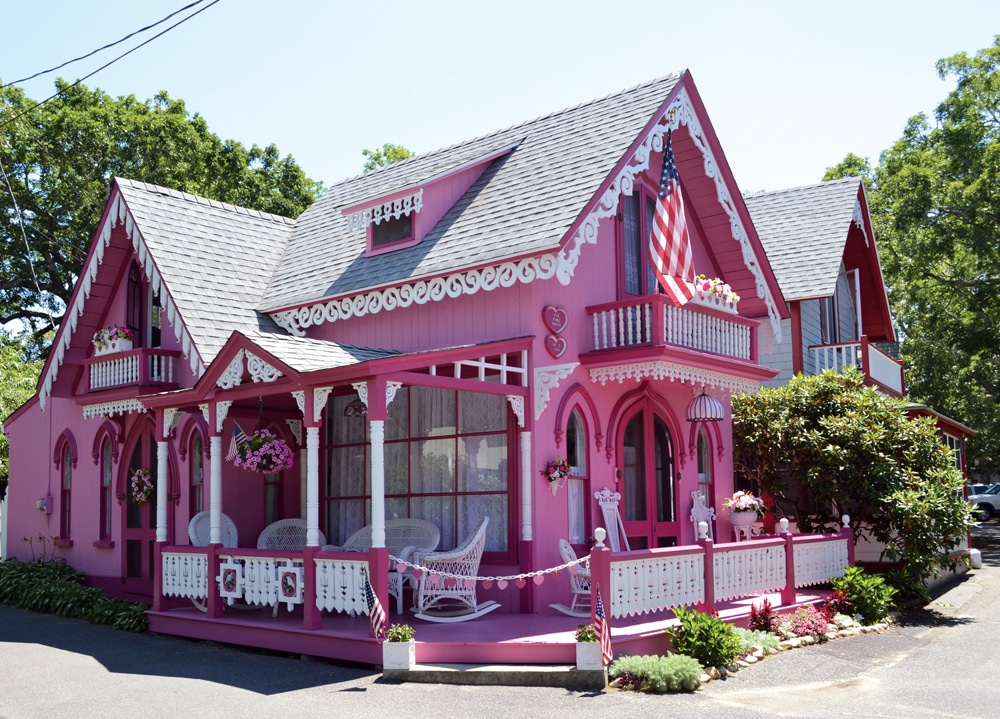 The Pink House in all its eye-popping brilliance, which has made it a favorite subject for local postcards.

The roots of the Campground go back to the year 1835, when a Methodist congregation from Edgartown began organizing retreats on a patch of open land in Oak Bluffs. These events would last a week or two, with participants staying in tents. Over the years the retreats grew in popularity, swelling to 200 tents by the summer of 1855. Not long after, the tents began to be replaced with cobbled-together wooden shelters. The improved accommodations encouraged attendees to extend their stays, and an organized summer community began to form.

The cottage that would become known as the Pink House was built in 1870, but nearly three-quarters of a century would go by before it got its eponymous hue. That change was made by New York City artist Lillian Cotton, who bought the rather run-down home for $200 in the aftermath of the Depression. Cotton’s color choice was supposedly controversial enough that she refused to leave the property while it was being painted, lest anyone try to stop the transformation. Cotton named the home Cattleya, after her favorite pink orchid. 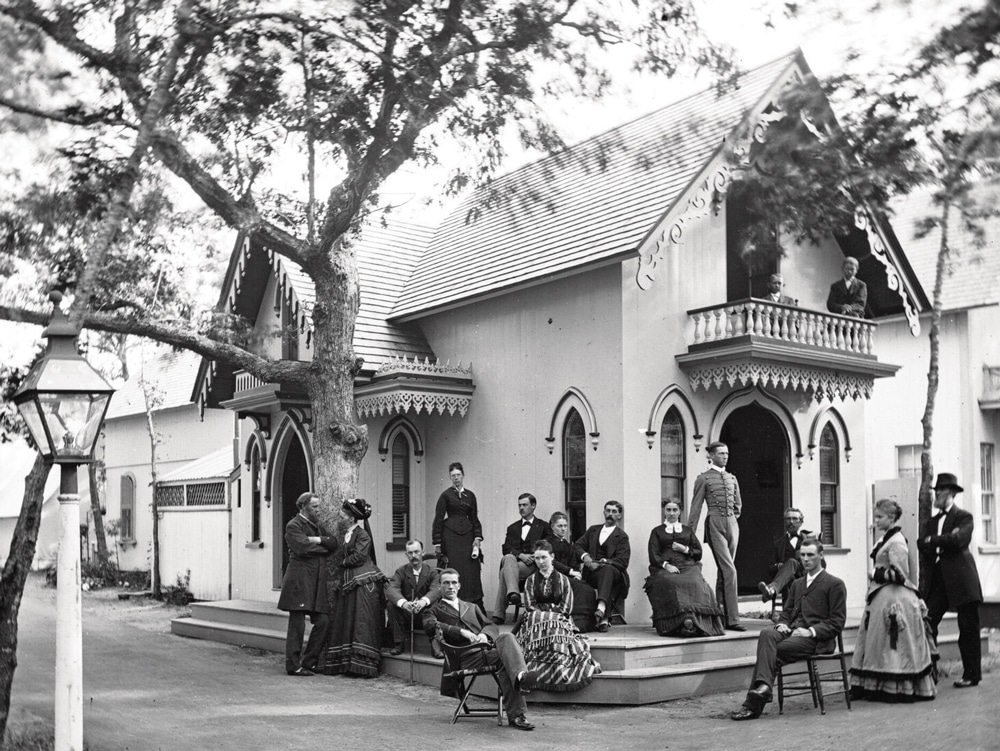 The cottage as it looked shortly after it was built in 1870 (long before it took on the eccentric hue that would make it famous).

While at first the color scheme may have raised eyebrows, before long Cotton’s neighbors were following suit. In a matter of years, the Campground had transformed into perhaps New England’s most kaleidoscopic neighborhood. As for the Pink House, many owners came and went, but each maintained Cotton’s original vision.

In the fall of 2013, McDonald saw an online listing for the Pink House. “I was intrigued, but it didn’t seem like it made sense for us, since we live in Texas,” she recalls. “The next summer, we went on a family safari, and when we came back, I decided I was done with seeing the world and was only going to return to my favorite places from then on.

“I checked, and the Pink House was still for sale,” she continues. “We bought it sight unseen—our first walk-through was on the evening before our closing.” The Pink House has been her family’s summer home ever since.

Since purchasing the cottage, McDonald and her husband, Brant Weatherford, have restored the backyard, complete with brick patio and stone alleyway. The exterior was sanded down to bare wood and repainted; the side porch was rebuilt. The kitchen was redone with new appliances, and the entire interior got a fresh coat of paint. 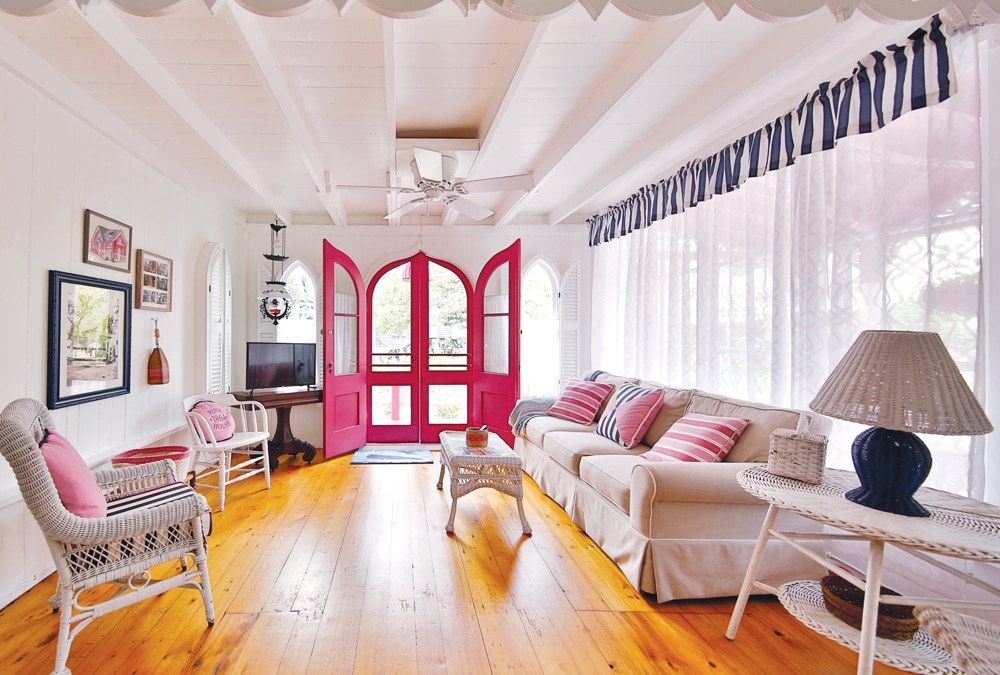 A wall of windows installed in 1960 floods the living room with natural light, casting a glow over the recently refinished pine floor. 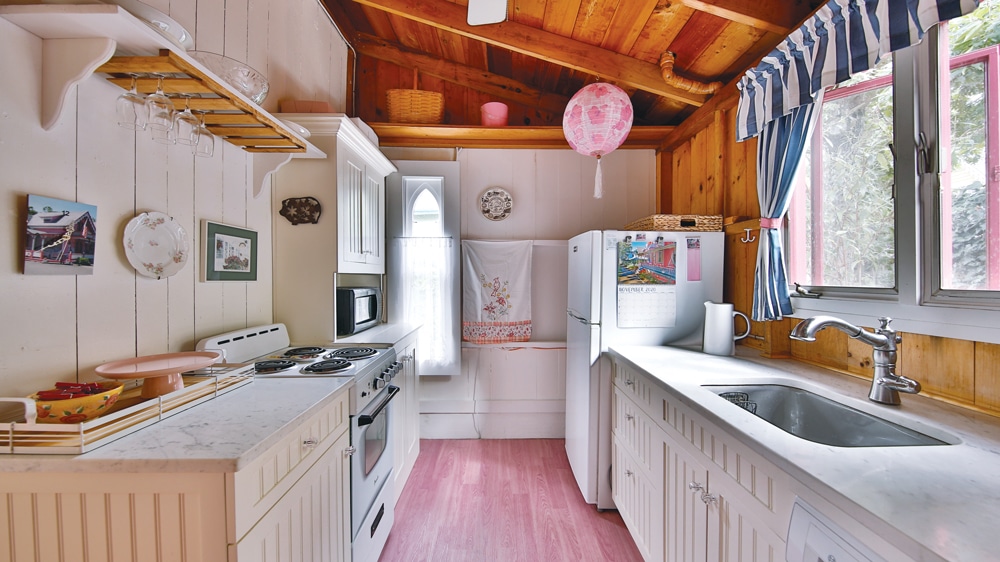 A view of the cottage kitchen, with its updated appliances and, yes, pink flooring.

“We didn’t realize that Lillian Cotton had painted the interior of the cottage pink as well, until we came across a painting on eBay that showed the interior of the cottage with pink walls and floor,” McDonald notes. That painting, which had previously been bought at the estate sale of Lillian Cotton’s sister, now has a place of prominence in the Pink House. And some of the pink floor has returned too. “I couldn’t resist,” McDonald admits.

Among the architectural highlights of the two-bedroom, one-bathroom cottage are a trio of Gothic double doors and a stained-glass balcony door. There’s also a wall of windows that makes the Pink House much brighter inside than many of its neighbors; it was installed in 1960 by then-owner Jean Spencer, a portrait artist whose work demanded the extra sunlight. 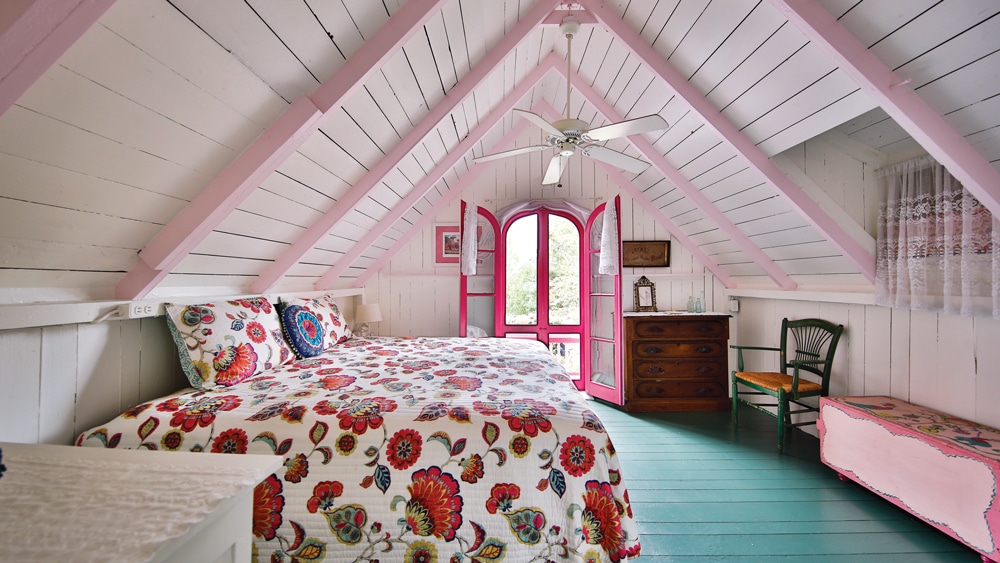 Gothic doors are a recurring design element in the Pink House. Here, they provide access to the front balcony from a color-splashed bedroom.

Though they still love being on Martha’s Vineyard, McDonald and her husband and their two adult children—who now have families of their own—have literally outgrown the Pink House. So they are moving to a property with two cottages just eight doors up the street.

The Pink House is being sold with original furniture, as well as paintings by Cotton and Spencer. Also included are two heart-shaped signs that adorned the cottage for 40 years and are ready for restoration. 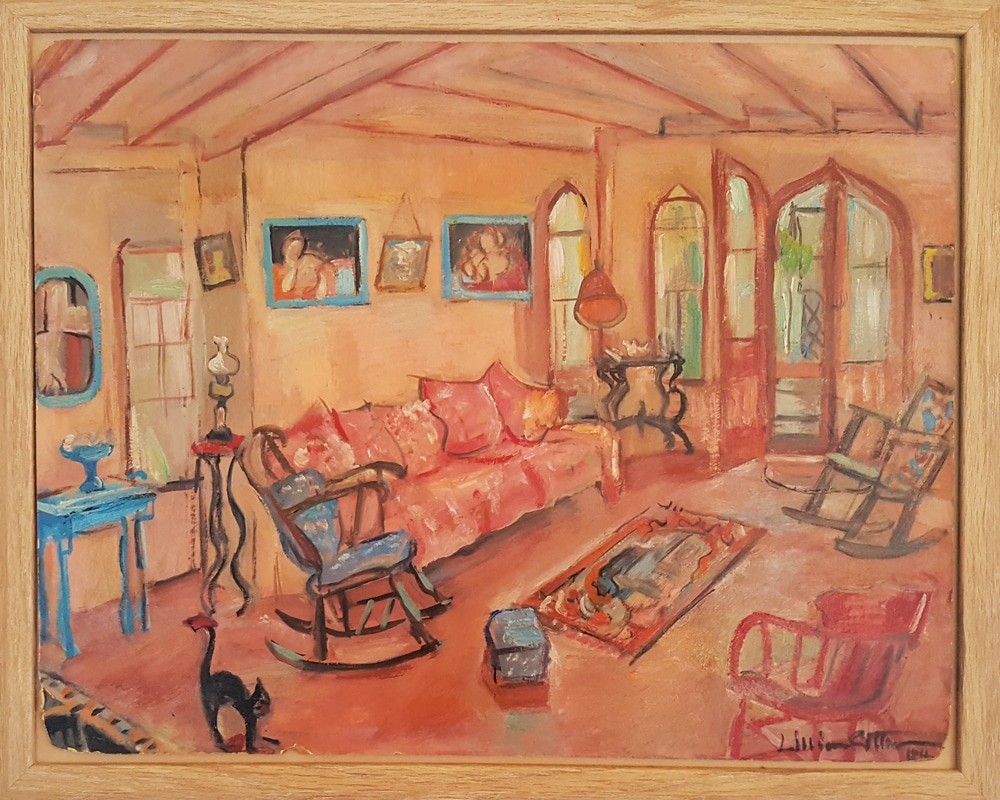 Former owner Lillian Cotton’s painting of the living room (showing the original pink walls and floor) is included in the sale.

The cottage has been photographed by the likes of Walker Evans and Alfred Eisenstaedt. It has been featured on postcards and even on a stereoscopic card from 1870. And McDonald and her family have come to understand that you don’t so much own a property like the Pink House as sign on to become part of its history.

“We hate to leave the Pink House. We opted not to sell it last year because we wanted one more summer here,” McDonald says. “But now it’s the right thing to do. We need more space, and it is time for someone new to fall in love with this absolute jewel of a cottage.”