Describing himself as “a country boy at heart,” Chris Bennett has a deep-seated love of the outdoors. He grew up in the Maine woods, worked for a time on the Appalachian Trail, and even lived in a tent for six months as a backcountry ranger. Today he is a busy freelance photographer based in Portland, Maine, but he still answers the call of the wild, as shown by these portraits he made of AT hikers in their element. For our Q&A with Chris Bennett, read on. 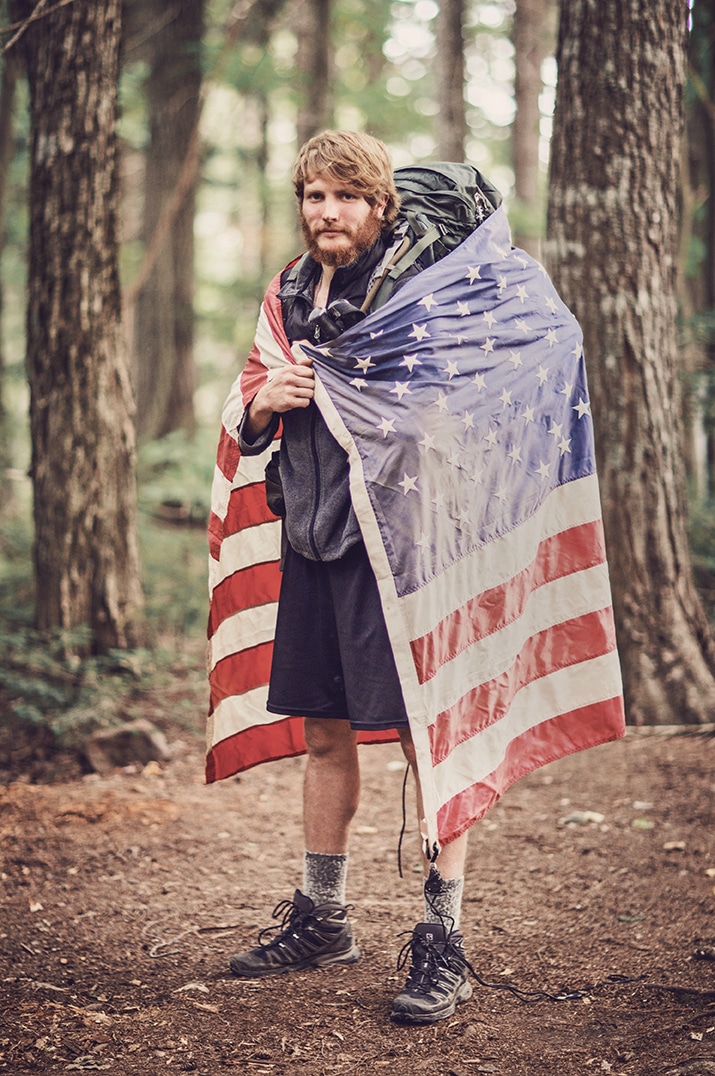 “Atlas” (Jeff Ferguson): Atlas didn’t even know about the Appalachian Trail until a month before he started hiking it at the urging of a buddy. That same friend ended up bowing out after the first night, but Atlas continued on with his 110-pound pack – which led to his trail name, a reference to the character in Greek mythology. It’s worth noting that his pack weight is now down to 60 pounds, which is still twice what most thru-hikers carry. “Appalachian Trail hikers are the tightest community I’ve come across since leaving the Marines,” Atlas says. “You can leave your wallet out, and no one will touch it. Everyone has your back.”

What’s your connection to New England?

Chris Bennett: I was born and raised in central Maine and would always take trips to the mountains to hike and ski with my parents. I took my first solo backpacking trip when I was 14, a two-night trip on the Appalachian Trail near Moxie Pond. From then on I couldn’t get enough. College in upstate New York was rough, because I was hours away from big mountains and high places. Now that I’ve settled back in Maine, you can find me in the mountains almost every week.

What’s your background in photography?

CB: I majored in photographic imaging arts and sciences at Rochester Institute of Technology, where I received training in everything from the history of the photographic process to the physics of light to traditional darkroom techniques and the ethics of photography. Most important, I was able to meet and speak to some of the established photographers who were always passing through Rochester to give presentations or to stop at the George Eastman House. I was able to talk to greats like Arno Rafael Minkkinen, David Burnett, and James Nachtwey.

CB: My greatest inspiration is the outdoors, but I’ve also been interested in humans and our interactions and impacts on mother nature. The reason why people decide to hike 2,200 miles through the woods and over mountains fascinates me. Each person is different. My inspiration is always changing, but the writings of Wallace Stegner and Edward Abbey are currently influencing much of my work. I always find myself browsing books by the portrait master Richard Avedon, particularly his series “In the American West.”

To see more of Chris Bennett’s work, go to cbennettphoto.com or follow him on Instagram at @chrisbennettphoto. 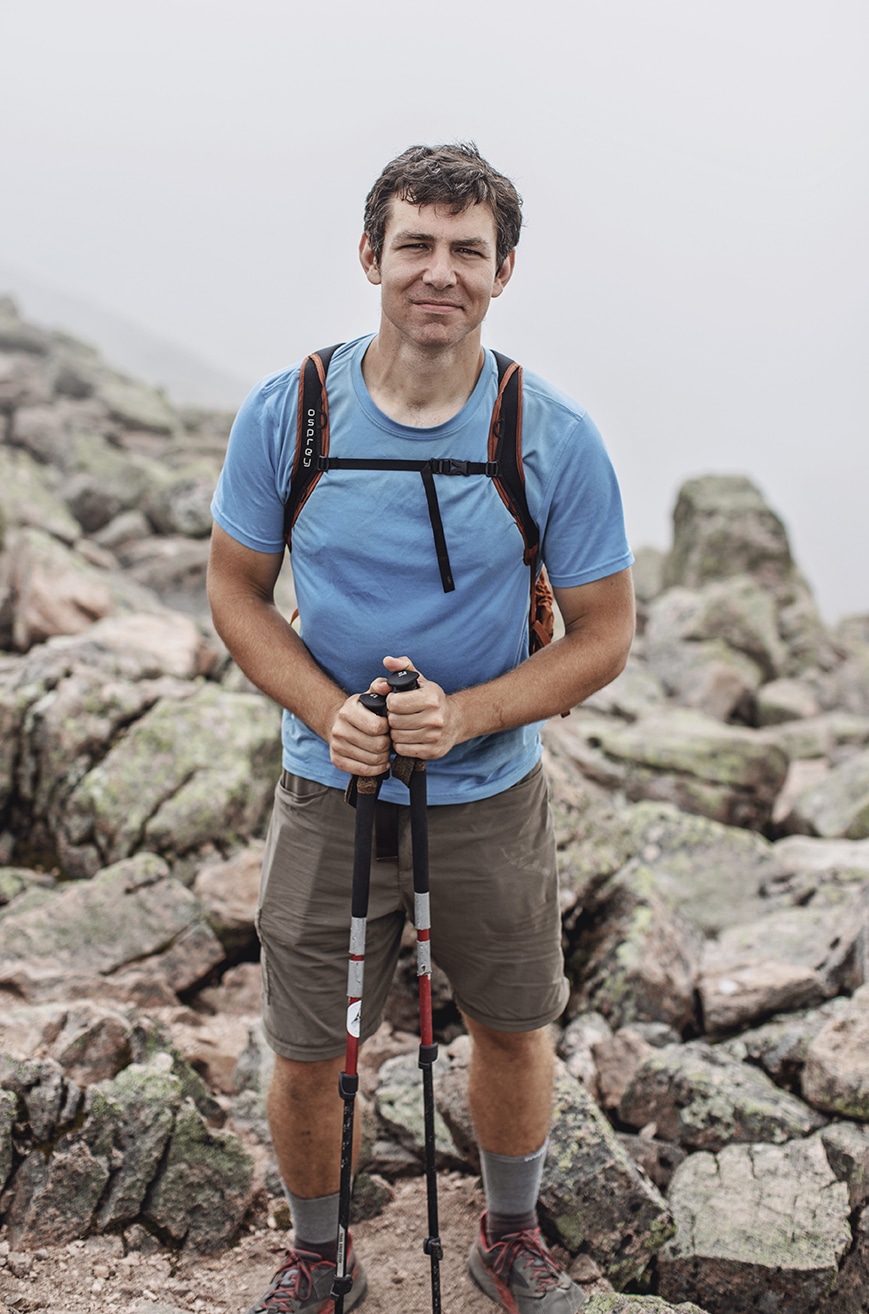 “Paddington”: “I was diagnosed with cancer in 2009, and that really upended my priorities…. Ever since then, I’ve tried to structure my life in a way that I won’t have any regrets. If there is something that I want to try or do, I’m going to go out there and do it. I first heard about the Appalachian Trail in high school, and after I had cancer I decided I wanted to do it. I have no kids, no wife, no girlfriend. The trail is one of those ideas that just seeps in and takes hold. I started researching last fall, and on March 6 I found myself walking the trail in Georgia.” 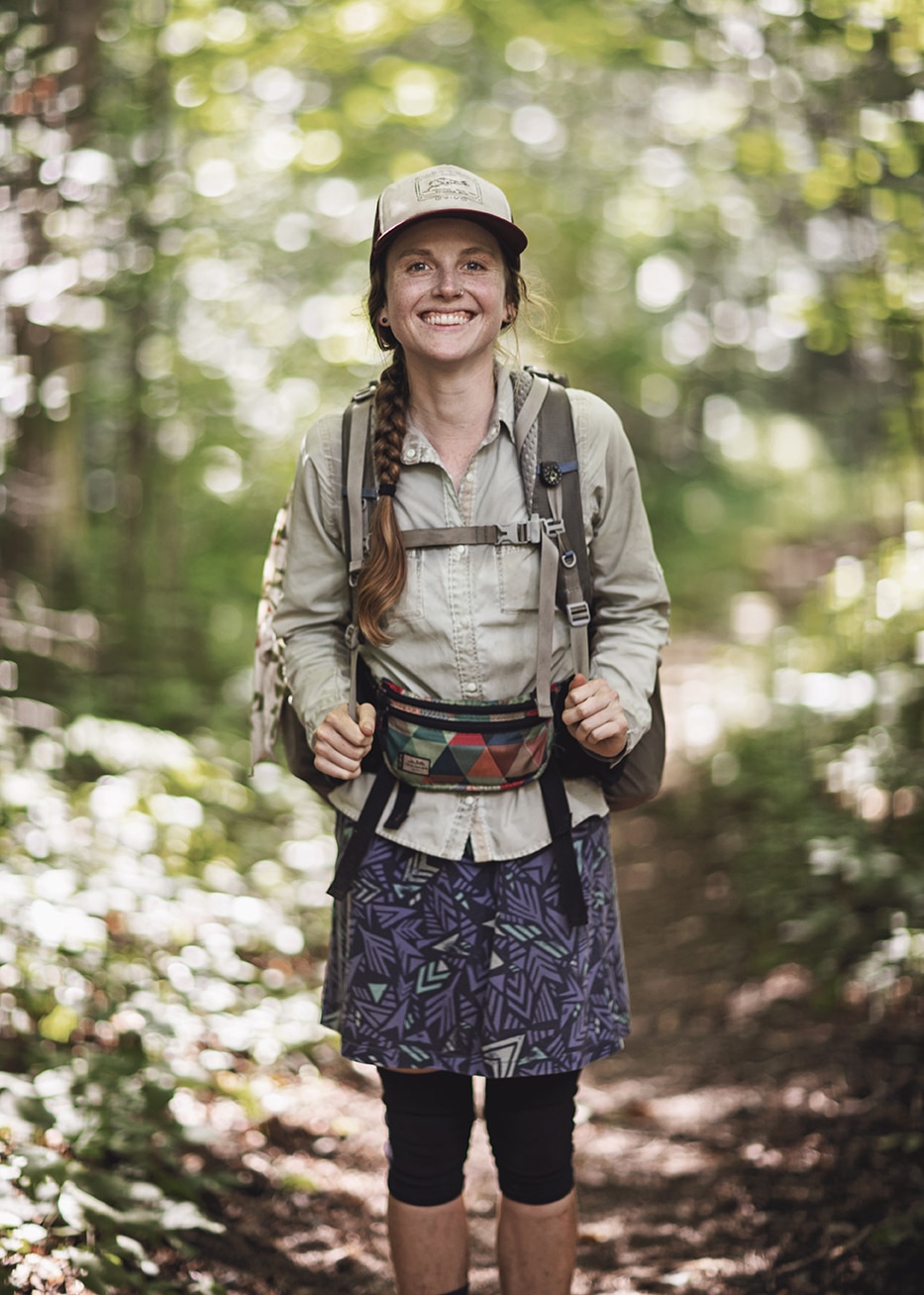 “Hummingbird”: “I work as a nurse, which means it’s easy to find a job. So I quit every once in a while to hike. I love the simplicity of it: Hike. Work. Save. Hike. I hiked the Pacific Crest Trail in 2016. The Continental Divide Trail seemed too intimidating, so I decided to come out here and explore the East Coast. I could do without the southern states, but I love New England.” 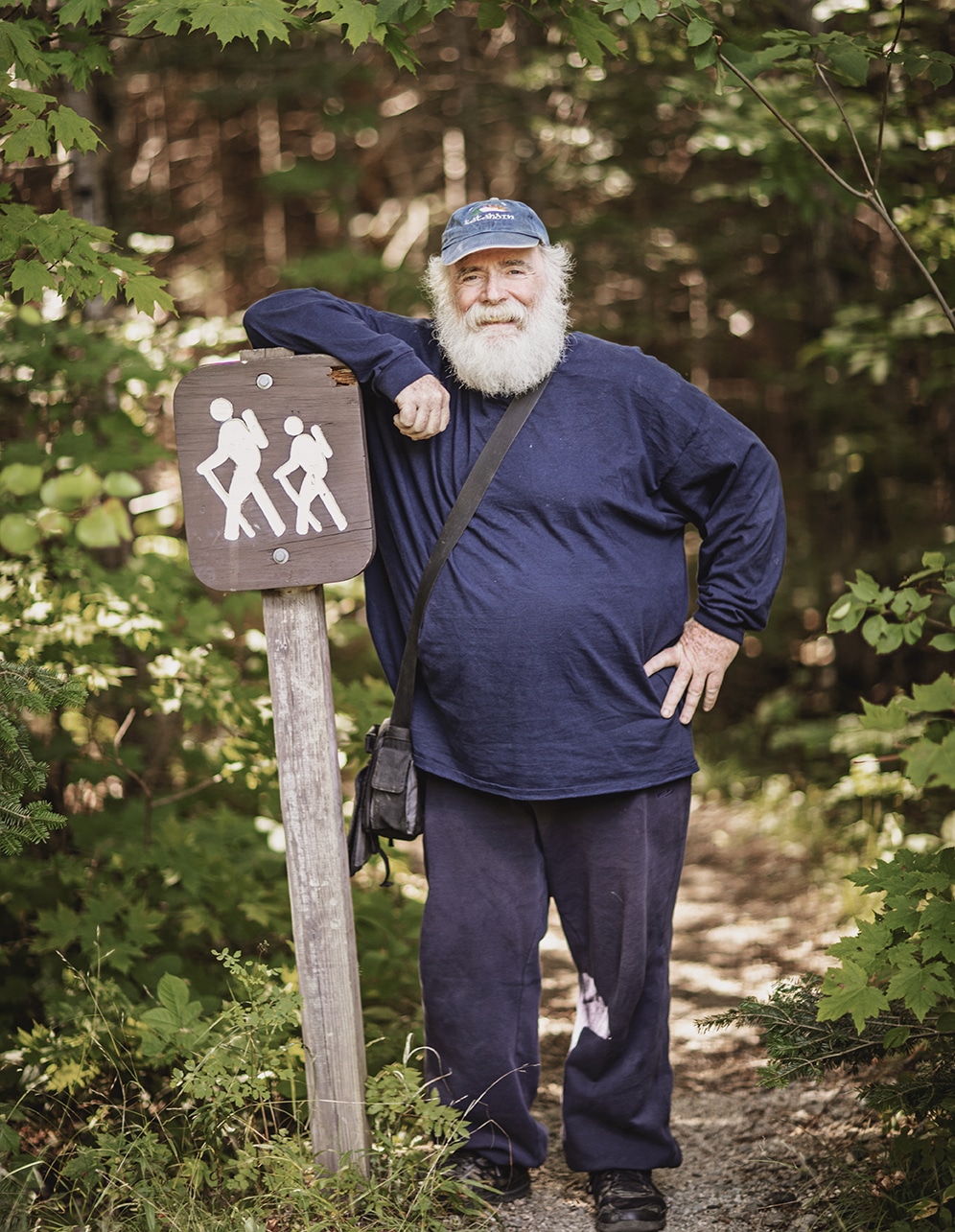 Warren Doyle: “I just completed my 18th traverse of the Appalachian Trail. I’ve thru-hiked nine times and section-hiked nine times over forty-five years; this time is my last traverse. I’m an educator, and all of my educational beliefs and values and ideals come from the trail rather than the classroom. On eight of my thru-hikes I organized groups of people, and we hiked the trail together to help facilitate everyone’s dreams. I strongly believe that a country’s strength is not in its military might but in the number of people in its society that have fulfilled their dreams. Helping these people along the trail is my way of serving my country.” 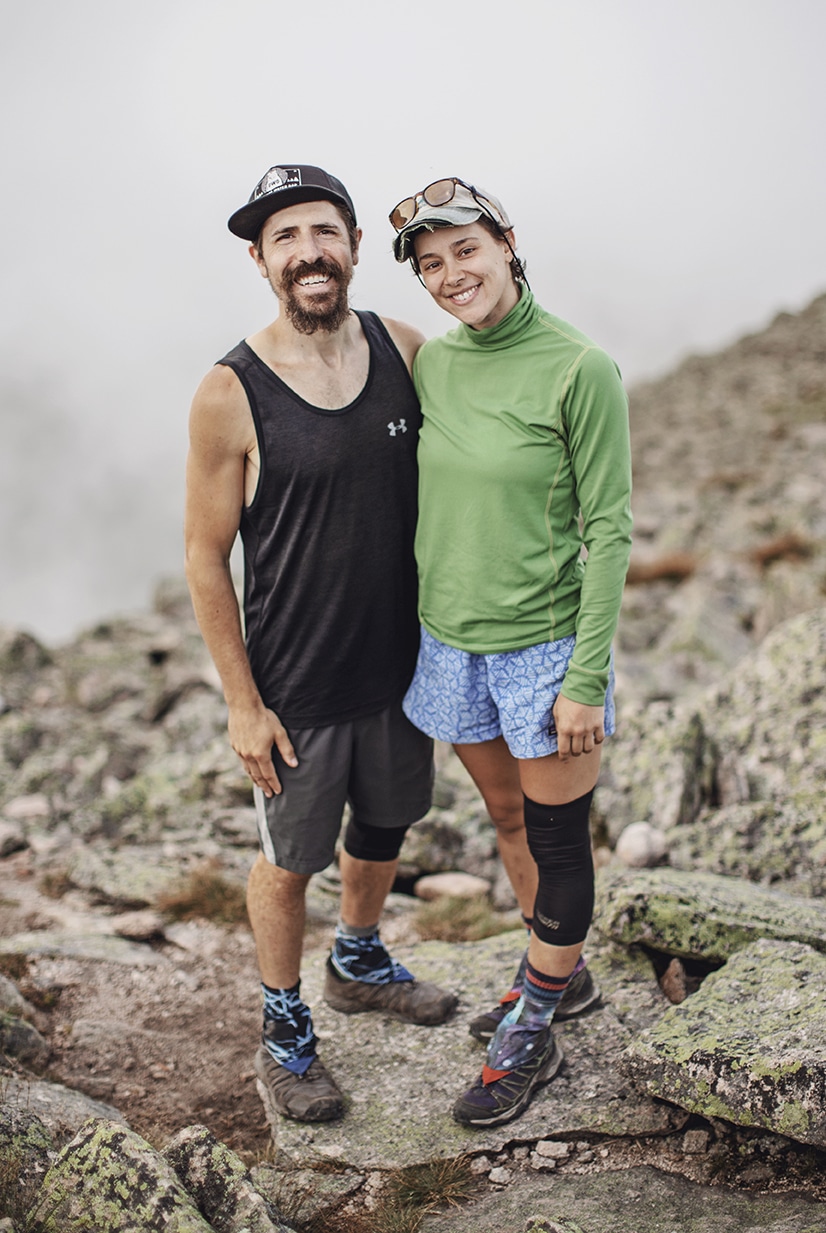 “Pacman” (left) and “Pacecar”: “We were married last October, and this is kind of our honeymoon,” says Pacman. “Instead of a regular wedding registry, we had an REI registry… so we didn’t have to pay for any gear! We had set some money aside, and we quit our jobs and got a sublet for our apartment in New York, so we actually couldn’t go back if we didn’t like the trail.” Pacecar adds, “It was  a journey of good and bad and hard and easy and rain and pain. But we definitely feel stronger now together, and I’m glad we did the journey.” 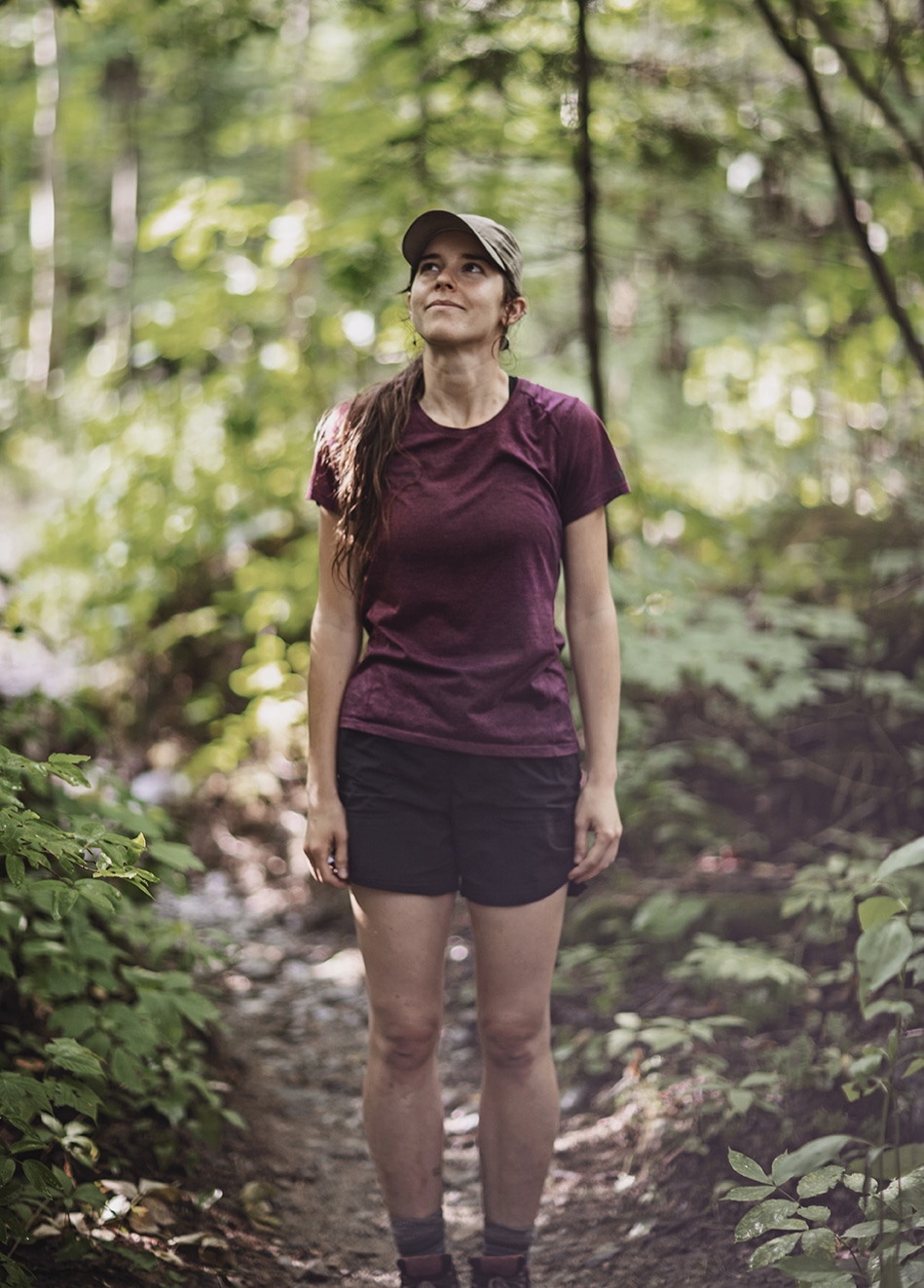 “Summit” (Jessica Barber): “I wanted to hike the Appalachian Trail to see what I’m made of. I saw seven thru-hikers finish on top of Katahdin in 2015. They were of all different ages and athletic ability. I always thought thru-hikers would be young, athletic men, but when I saw that it could be anyone, I thought to myself that maybe I could do it.” 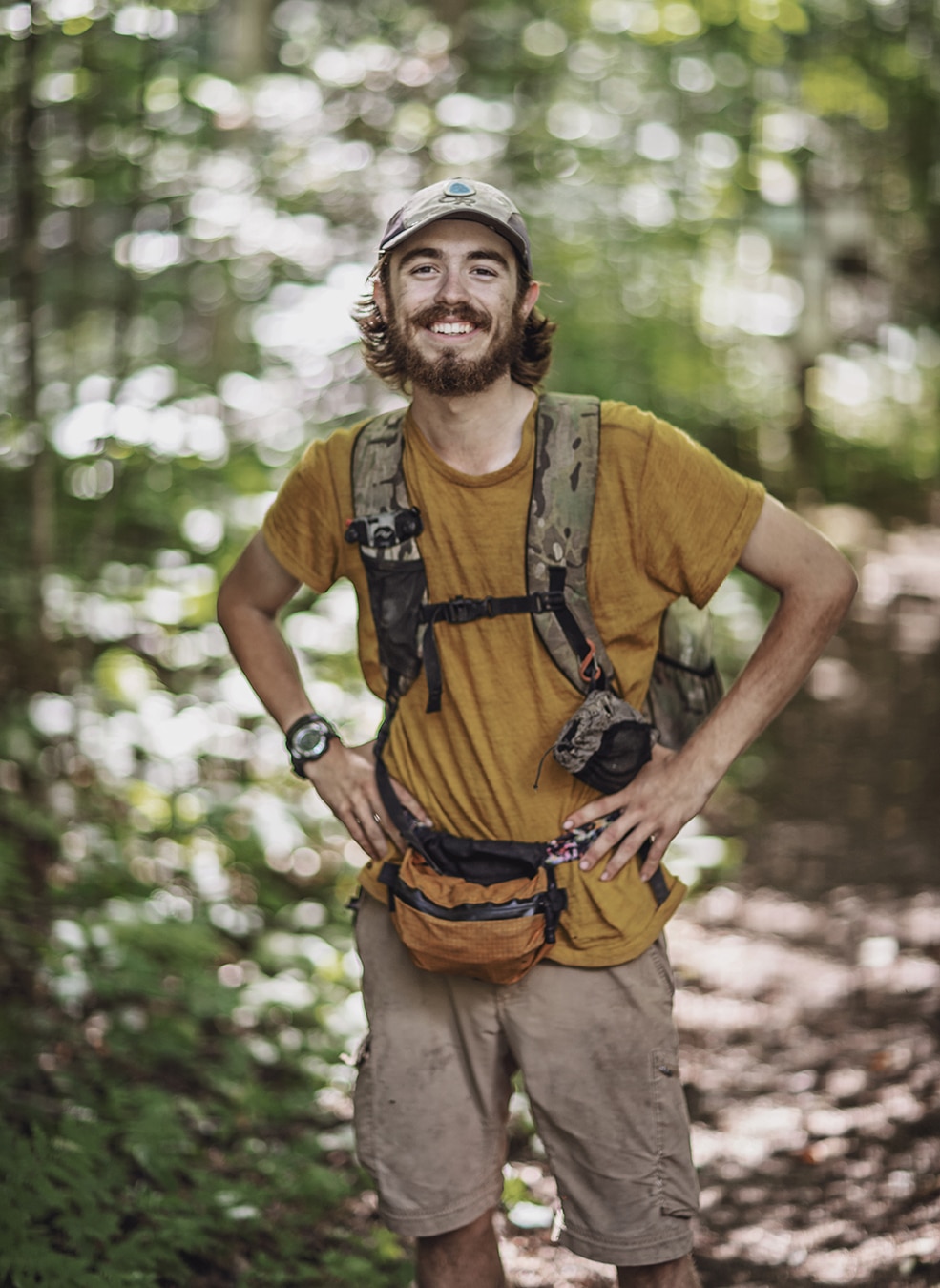 “Scrapbook” (Garret Hernandez): “I knew I was going to hike the Pacific Crest Trail after I graduated high school – I needed something to do before entering the real world. I did that, and somehow ended up in the desert of New Mexico the next summer at the start of the Continental Divide Trail. After I finished that, I thought to myself, well, I’m two in, I should probably finish the Appalachian Trail.” Hernandez says the bond between hikers on the trail is what he loves best. “There is no other place where you can meet someone in the morning, share a hotel room with them in the afternoon, and lick their spoon clean in the evening.” 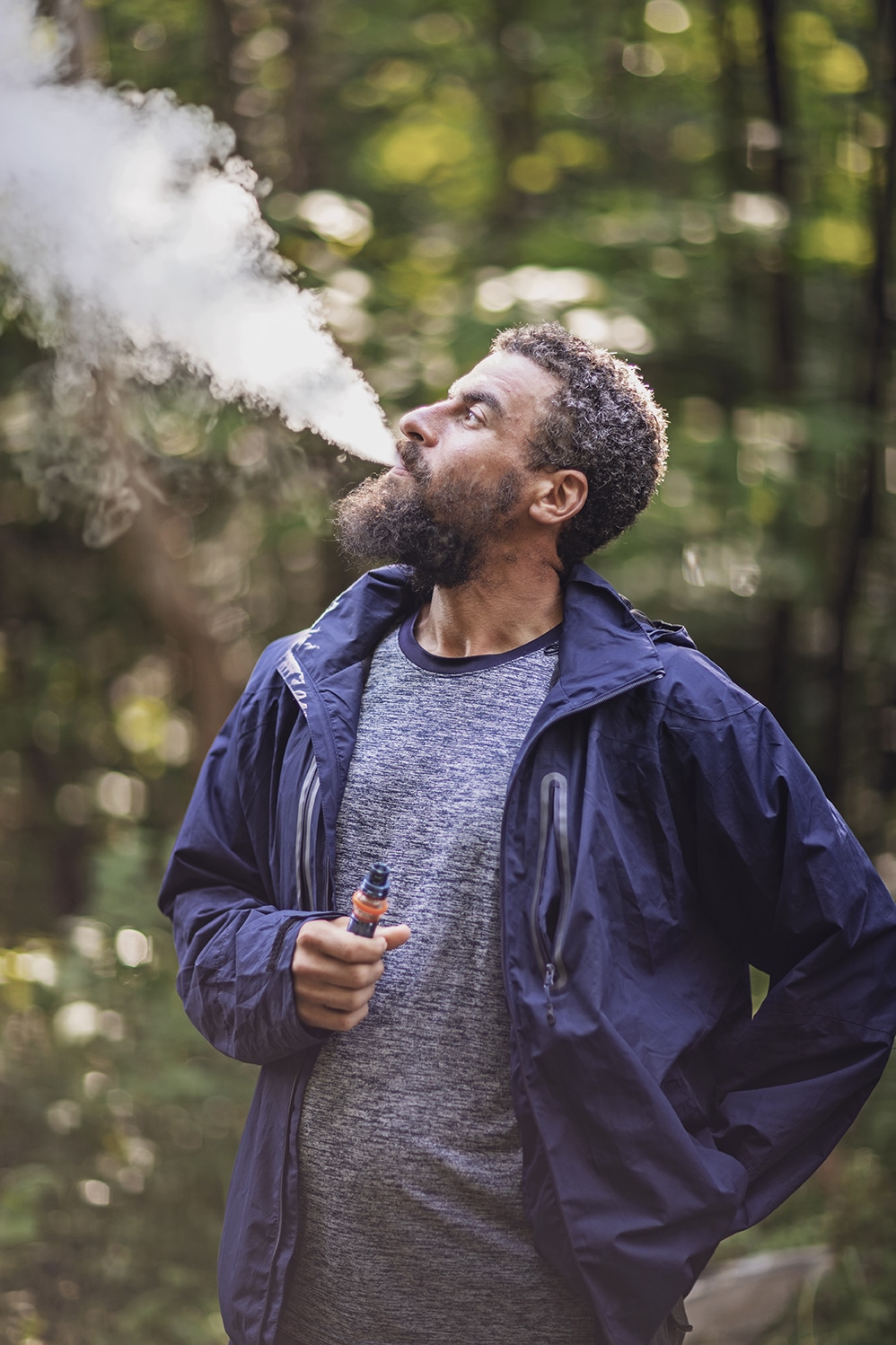 “Little Blue” (Brad Duffan): “I’m 36, and I’ve been planning to do the trail for a few years. But every time I wanted to go, something would happen. I’d put it off for a trip, or a family event, or a raise at my job… I was starting to think that the only time I’d have to hike the trail was after I retired. All the retired people I’ve met hiking the trail, they’re having fun and they all have a bigger bank account, but that’s not really how I wanted to hike the trail. I wanted to come out and do it while I still had fresh-enough knees to finish.” 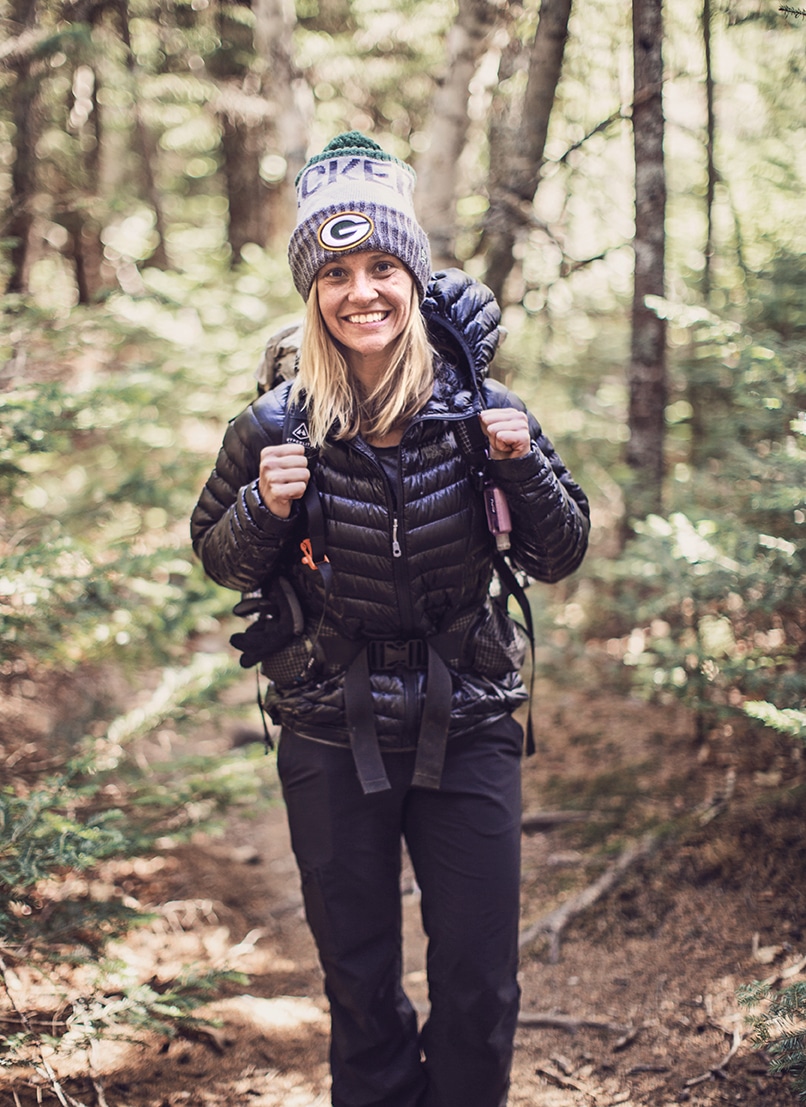 “Wild” (Natalie Belongie): Wild is a boom operator on an Air Force KC-135 tanker, which means she’s the one who controls the refueling arm between two multimillion-dollar jets flying at 30,000 feet. A couple of years ago, she was in a weird place with her job and didn’t feel like the same happy person she used to be. After talking to a friend whose girlfriend had hiked the AT, she thought hitting the trail could give her a little reboot on life. When her hike is done, she heads back out on a two-month deployment. 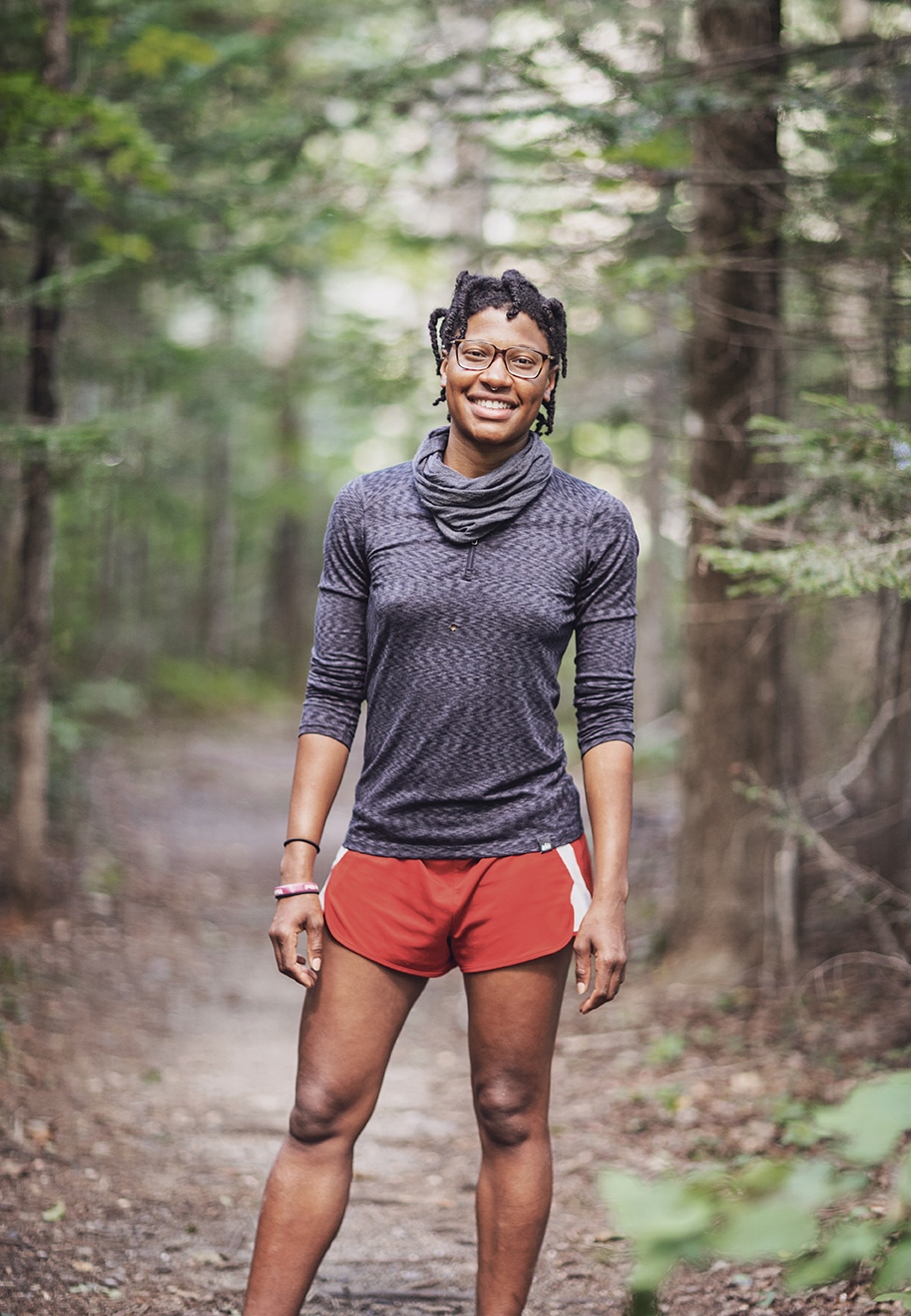 “Tangerine” (Briana Crawford): “I really wanted to do this to have an accomplishment for myself. I wanted something that I put my mind to and finished for myself, not because society told me to. Last year I started the trail and made it 623 miles to Harrisburg, Virginia, but had shin splints really bad because I was trying to do too many miles per day. So this year I started over again. It’s been nice. I’m walking slower. I was out here to establish myself or find something within me. I’m not perfect, but somewhere in Vermont, at the five-month mark, I just accepted who I was. And that was a very powerful moment.” 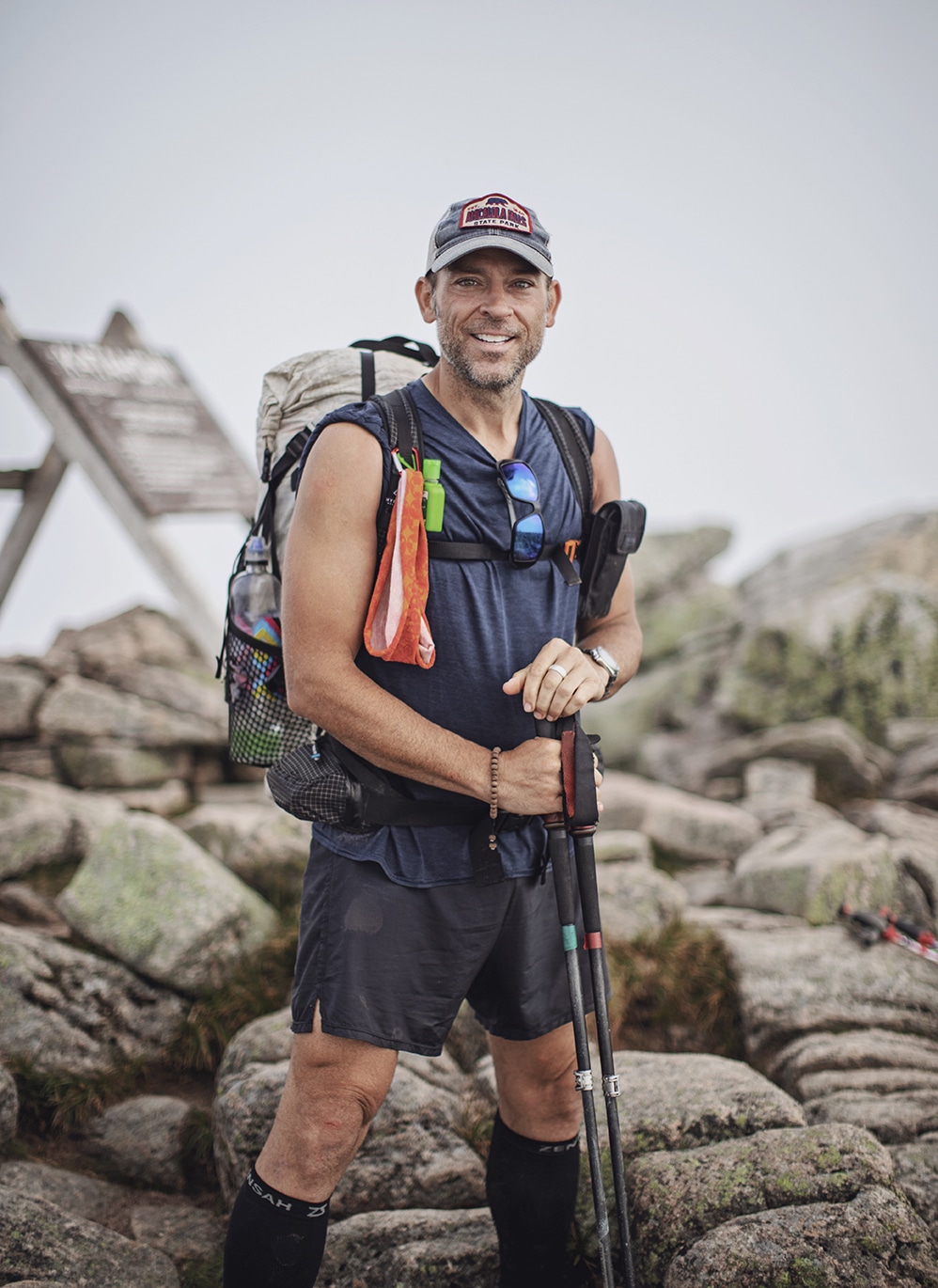 “Pay It Forward” (Gabriel West): “I started the trail April 23, two years after the passing of my mother. I spent the last two years getting my dad and family squared away and healthy, and I finally realized I was the only one who hadn’t truly healed yet. A friend recommended I hike the AT and get it all figured out. The first five hundred miles I had a whole lot of issues to straighten out. Every mile after that has just been a gift. Being able to get my mom’s passing out of my head and into my heart… it took two years. It was never about getting to the top of Katahdin and getting a picture… it was about the journey. It’s been a blessing.”

2020 Guide to Using an HSA for Savings, Tax Breaks, and More