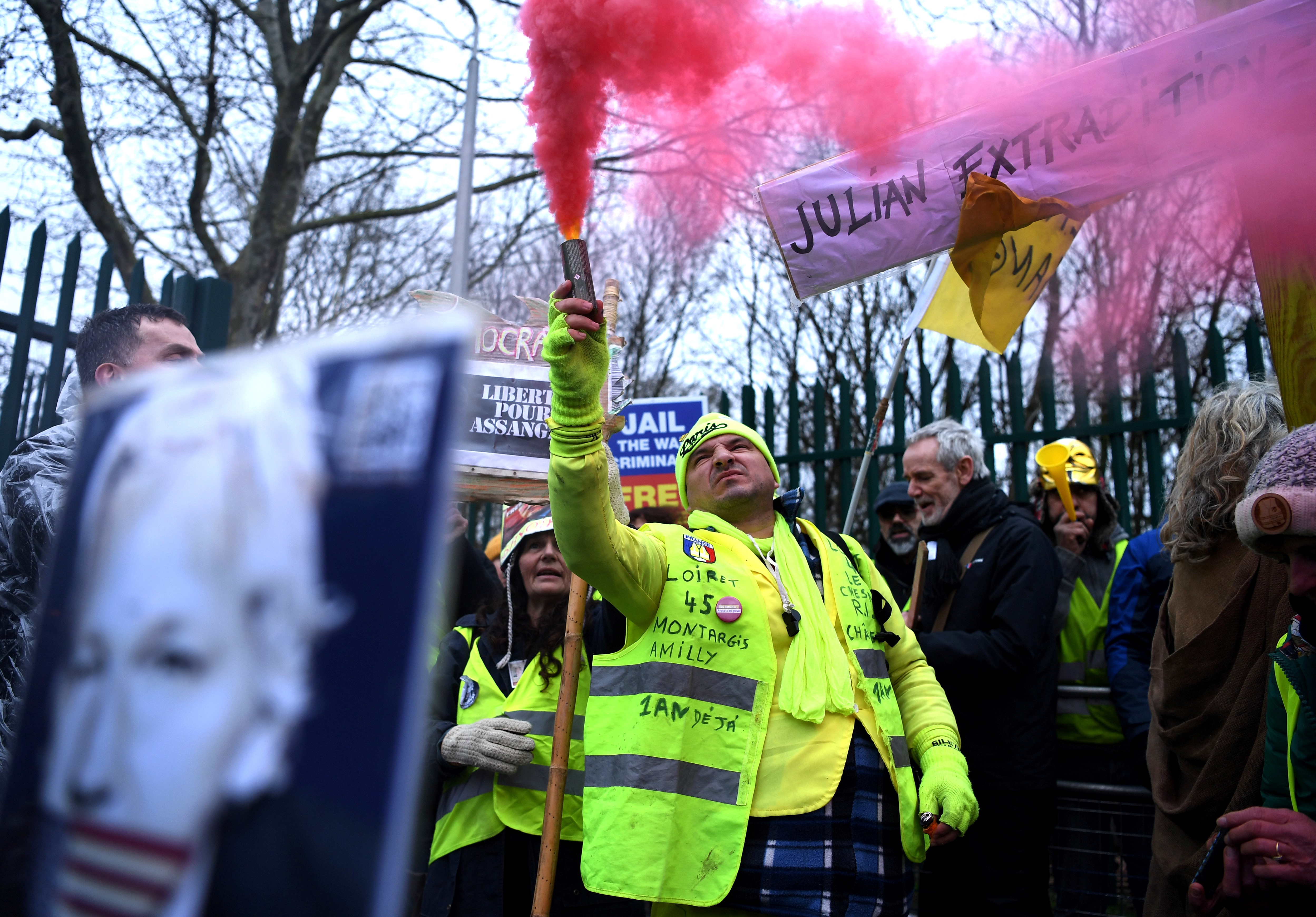 Gareth Pierce, a lawyer representing Assange in his extradition proceedings in London, plans to argue this week that the process to try to extradite her client was abused from early on. Representatives for Assange’s defense team say they expect to introduce recordings and screenshots of communications of a close Grenell associate, including a secondhand claim that Grenell was acting on the president’s orders.

Grenell’s sudden embroilment in Assange’s extradition fight comes at an inconvenient time, as Democrats and national security veterans criticize him as ill-suited and unqualified to be the acting director of national intelligence. And it threatens to spotlight his close relationship with President Trump, feeding the widespread perception that the president is politicizing intelligence work for partisan ends.

At the heart of the Assange team’s argument is an ABC News report from last April alleging that, while serving as Trump’s ambassador to Germany, Grenell told Assange’s Ecuadorean hosts that the U.S. government would not pursue the death penalty for Assange if Ecuador allowed British officials to enter its embassy in London and arrest him.

Assange’s legal team will claim that Grenell’s role was more extensive than previously known, and that it corrupted the extradition process early on. The suggestion will be that the U.S. was so desperate to get Assange in its custody that American officials, via Grenell, agreed in advance to take a particular sentence off the table before even allowing a trial and sentencing to play out.

The WikiLeaks founder’s attorneys are also expected to present evidence that they believe shows Trump explicitly tasked Grenell with making the offer, thereby politicizing the process. One of Assange’s lawyers, Edward Fitzgerald, hinted at this argument in his opening statement on Monday, when he said that Assange’s prosecution was “not motivated by genuine concerns for criminal justice but politics.”

The evidence submitted this week will include new materials submitted to Assange’s legal team by political activist and journalist Cassandra Fairbanks, a staunch defender of Assange who has worked for the Russian state-run news site Sputnik and the far-right outlet Gateway Pundit. She is expected to be listed as a formal witness in the case.

Fairbanks recorded two phone calls she had with one of Grenell’s close associates, Arthur Schwartz, and took screenshots of their conversations about Assange and Grenell. She also gave the materials to the nonprofit transparency group Property of the People, which provided them to POLITICO.

The screenshots and phone calls span from October 2018 to September 2019. In them, Schwartz tells Fairbanks that Grenell was “taking orders from the president” when he got involved in facilitating Assange’s arrest and urges her not to disclose what she’s been told about Grenell’s role in the process.

But Schwartz appeared to grow frustrated and fearful after Fairbanks tweeted, on Sept. 10, 2019, that Grenell “was the one who worked out the deal for Julian Assange’s arrest.”

“I don’t want to go to jail,” Schwartz told Fairbanks in a September 2019 phone call, accusing her of posting “classified information” in the tweet. Fairbanks posted the tweet around the time Grenell’s name was being floated to replace John Bolton as Trump’s national security adviser.

“Please. I’m begging you,” Schwartz says in the recording. “They look at you, they see that we speak, that’s bad.”

Grenell’s entry into the legal fight over Assange highlights the fact that, in since-deleted tweets from 2016, he promoted the WikiLeaks disclosures targeting Democrats; later, in April 2017, then-CIA Director Mike Pompeo labeled the group a “hostile intelligence service” aided by Russia.

And the suggestion that one of Grenell’s close associates who was not in government may have been privy to conversations surrounding a sensitive law enforcement operation will likely raise more questions about his fitness to lead the entire U.S. intelligence community. A spokesperson for the Office of the Director of National Intelligence did not return a request for comment.

It’s not clear whether Schwartz was actually privy to anything classified, or whether Grenell told Schwartz anything about his involvement in Assange’s arrest. “I highly doubt I would tell her anything real, accurate or of any importance,” Schwartz told POLITICO, adding that Fairbanks is “not someone that I trust.”

“I barely remember that conversation,” Schwartz said. “I remember that she was slinging mud at a friend of mine on social media and I wanted her to stop. Knowing that she’s not too bright and easily manipulated, I threw a bunch of nonsense at her that I thought would get her to stop. And she did stop.” Schwartz also said he did not recall chatting with Fairbanks over Signal, a secure messaging app.

In a written timeline Fairbanks provided to Assange’s legal team that was also obtained by POLITICO, Fairbanks said Schwartz told her on October 30, 2018 — two weeks before prosecutors accidentally revealed in a court filing that DOJ had secretly filed criminal charges against Assange, and nearly six months before Assange was arrested—that the U.S. government would be going into the embassy to arrest him, and implied that Ecuador would allow it to happen.

That same month, Grenell had secured Ecuador’s cooperation with the arrest, via the pledge for no death penalty—but his role was not revealed publicly until ABC News did so in April 2019.

“I need to let Julian’s lawyers and family know that the president personally ordered an anti WikiLeaks ambassador from a country uninvolved in the case to secure Julian’s arrest,” Fairbanks told Schwartz on October 30, 2018, via the encrypted messaging app Signal, according to screenshots provided to POLITICO. “It’s clear he’s a political prisoner and his health is deteriorating rapidly. I don’t know if it will matter to them, but it seems important, and they should know.”

Schwartz was not sympathetic, but didn’t dispute her claims as he sought to persuade her not to reveal the impending operation to Assange.

“I wouldn’t get so emotional until you see exactly what that worthless piece of garbage did,” he replied, referring to Assange. “There’s a good reason the death penalty was on the table.”

Fairbanks was incredulous: “Are you sure it’s not just Clinton friends taking some random photos and pinning it on him for revenge or something?”

“Forget about pictures,” Schwartz replied, possibly suggesting that he had access to non-public information. “There were other things that happened because he did what he did that led to horrible suffering and death. I have zero sympathy for him. Doubt you will either when/if it comes out publicly.”

Fairbanks visited Assange on March 27, 2019, roughly two weeks before his arrest, and relayed what she’d heard from Schwartz in October, she told Pierce.

On March 29, Schwartz told Fairbanks in another call obtained by POLITICO that “there’s an investigation now, into people at State” into who leaked Fairbanks the information about the operation. “I’m sorry,” she replied.

Schwartz is well known in Washington as a Trumpworld fixer who often criticizes journalists and other perceived enemies on his Twitter account. According to the New York Times, Schwartz is a “central player” in an effort to “discredit news organizations deemed hostile to President Trump by publicizing damaging information about journalists.”

But last September, he appeared worried about being exposed himself.

“I don’t want to go to jail,” Schwartz told Fairbanks in the September call. Fairbanks denied posting anything classified, telling Schwartz that she had just been referring to the ABC News report, from months earlier, about Grenell’s role in the Assange operation.

“Yeah, Julian’s in jail right now, because of this,” replied Fairbanks.

“I don’t want to go to jail,” Schwartz retorted.

“Alright, well, I’ll delete my tweet, only because you’re saying you’ll get in trouble,” Fairbanks replied.

Fairbanks agreed to delete the tweet, but retained a screenshot that was reviewed by POLITICO.

The materials will be introduced as soon as Wednesday, according to a person with direct knowledge of the legal strategy, and are “just one piece of the argument” that the U.S. criminal charges and extradition request for Assange stemmed from “a political imperative to get him at all costs” rather than a good-faith legal process.

Another big piece of that argument was presented by Assange’s legal team last week, when they submitted a statement from one of WikiLeaks’ lawyers claiming that Assange had been offered a pardon on Trump’s behalf by California’s then congressman Dana Rohrabacher.

Assange would be pardoned, Rohrabacher allegedly claimed, if he would provide evidence that Russia was not WikiLeaks’ source for the hacked DNC documents that the organization released in 2016.

Rohrabacher acknowledged meeting with Assange, but said only that he promised to ask Trump to pardon the WikiLeaks founder “if he could provide me information and evidence about who actually gave him the DNC emails.”

“At no time did I offer a deal made by the President, nor did I say I was representing the President,” Rohrabacher said in a statement.

Ryan Shapiro, the executive director of Property of the People, said he wanted to release the Fairbanks materials now because they raise concerns about Grenell’s judgment.

“The Trump regime is consolidating power and the nation’s new top spy is a former Fox News contributor and far-right public relations flack who appears to have leaked classified information to a Trump family political fixer who subsequently shared it with a prominent alt-right blogger,” Shapiro said. “Americans must confront the Trump regime’s ongoing seizure of power or suffer the United States’ descent into genuine authoritarianism.”