Please note that businesses, attractions, and events throughout New England have been closed and/or canceled in response to the COVID-19 health crisis. Please travel responsibly, and check with individual businesses and event organizers before making travel plans.

In this era of high-low foodie fusion, there are plenty of haute hot dogs to go around. Blended with Kobe beef, laced with foie gras, they come drizzled with chimichurri, bonito flakes, and sriracha, and arrive nestled in brioche and pretzel buns. And this kind of food play has its charms. But we’re partial to the classics from decades-old, family-run spots that have mastered the art of a perfect dog on a griddled or steamed bun, topped with a house relish or special sauce. So consider this list of the best hot dogs in every New England state a sort of hall of fame. All of its members are worth a visit. 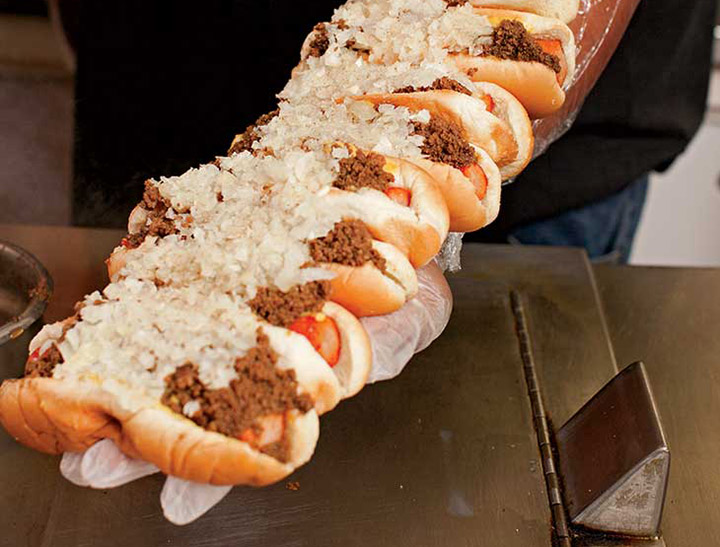 The Best Hot Dogs in Every New England State

Since 1928, three generations of the Blackman-Mahoney family have been serving up top-notch dogs topped with their special (and very secret) spicy pepper relish and a stripe of brown mustard. The quirky eatery, a barnlike building anchored by two octagonal towers, sits on the same piece of land that Art and Mary Blackman purchased on the  Cheshire-Waterbury line in 1925 with the dream of opening their own business. We love how the Blackie’s cooking method — the hot dogs, sourced from Martin Rosol in New Britain, are boiled in oil — crisps the edges and makes the casings split. It’s a nice textural counterpoint to the soft bun. Enjoy these treats with the house drink: a birch beer served on tap (chocolate milk takes second place). On the side? Just potato chips, no fries. As of late-May 2020: Blackie’s is open for takeout and outside dining according to state guidelines.

Flo’s Hot Dogs, located in a little red shack on Route 1 in southern Maine, has been woven into the vacation memories of countless families since Florence Stacy bought it in 1959. But as a year-round restaurant, it’s very much a local’s haunt. Now in the hands of Flo’s daughter-in-law and granddaughter, the little diner that could continue to serve all-beef dogs (from Old Neighborhood in Lynn, Massachusetts) topped as you like ’em. That is, unless you like ketchup: A sign at the counter reads, “Ketchup (for [children] under 15).” Take our advice and go with the two of the house special, a boiled dog and steamed bun topped with mayo, a dash of celery salt, and the tangy-sweet-oniony house relish, which won a Yankee Food Award in 2013 and can be purchased in jars or ordered online. Taken together, these ingredients form a perfect harmony of flavor and texture. As of late-May 2020: Flo’s is currently closed but hopes to open in late spring.

Eating at Jack’s requires a little patience, as there’s usually a line and the space is cramped. Like many of our best hot dog picks, Jack’s is a family business that dates back decades — in this case, a full century. Jaffros “Jack” Levanos opened this spot in 1917, and his grandson Jeff now runs the place. Our favorite order is the chili cheese dog: richly meaty, served on a steamed bun with a slice of melted American cheese, and a rightful bargain at $2.15. But there’s also sauerkraut and fried onions and peppers to top things off. Add a side of onion rings or fries (both excellent), and you’ll still make it out of here for under $5. As of late-May 2020: Jack’s is open for takeout and delivery.

It’s hard to resist the atmosphere of a genuine 1940s Worcester diner car, but the food at Gilley’s in Portsmouth is an attraction unto itself. These hot dogs, made from beef, pork, and veal, are traditional in style — for toppings, you’ll find chili, pickles, sauerkraut, and onions — and sourced from Shields Provisions in Kennebunk, Maine. The wieners are steamed, and the buns are griddled and buttery. It’s the classic American hot dog, perfected. As of late-May 2020: Gilley’s is open for online takeout orders with limited outdoor seating.

By all means, order at least two of Olneyville’s finest, served in a steamed bun with their signature meat sauce, mustard, chopped onion, and celery salt. That’s called “all the way,” and if you order enough of them, the guys who’ve worked there for a decade or three will stack them “up the arm” so they can turn out six at a time. Order them with coffee milk and a side of fries with vinegar and salt, maybe ketchup. But just don’t call them hot dogs. They’re wieners, pronounced wee-nuhs, and that’s final. Olneyville has been run by four generations of the Stevens family since the 1930s (there’s a second location in Cranston), and it’s nice to know that some things never change. As of late-May 2020: Olneyville is open for takeout at its Providence and Cranston locations. When the citizens of Rutland want a sure sign of spring, they head over to Tenneybrook Square on Route 7 and look for the bright red trailer with the “Big Lenny’s Since 1988” painted in mustard-yellow script on the side. This is Lenny Montouri’s hot dog cart, and it’s as much a fixture of the Rutland landscape as nearby Pico Mountain. People go to Big Lenny’s not just for Montouri’s outsize personality, but also for his Essem hot dogs crowned with homemade toppings — from hot relish, sweet onion sauce, honey mustard, and sauerkraut to Lenny’s own Vermont maple sriracha sauce (a side project he started with buddy Jackson Whelan).  A regular dog will set you back just $3.25, so sauce away. As of late-May 2020: Big Lenny’s temporarily closed due to owner illness in April 2019. We hope they’ll be serving up hot dogs again soon!

Where are your picks for the best hot dogs in New England? Let us know!