Back in March 2000, Bill and Kristen Golden became the owners—or, as they prefer, stewards—of the ultimate fixer-upper. It was impulsive, for sure. But it needed to be done.

Bill, a former Massachusetts state senator, had just returned from a business trip to Asia when he got a message from a friend. “It said, ‘Your ship has come in, log on to eBay.’ So I did, and there I see this Nantucket lightship for sale,” he recalls. “The auction was about halfway through, but there was an open house the next day. When my wife came home, I said, ‘Hey, were you aware of this?’ and she said, ‘Yes—and that’s why I didn’t tell you about it.’” 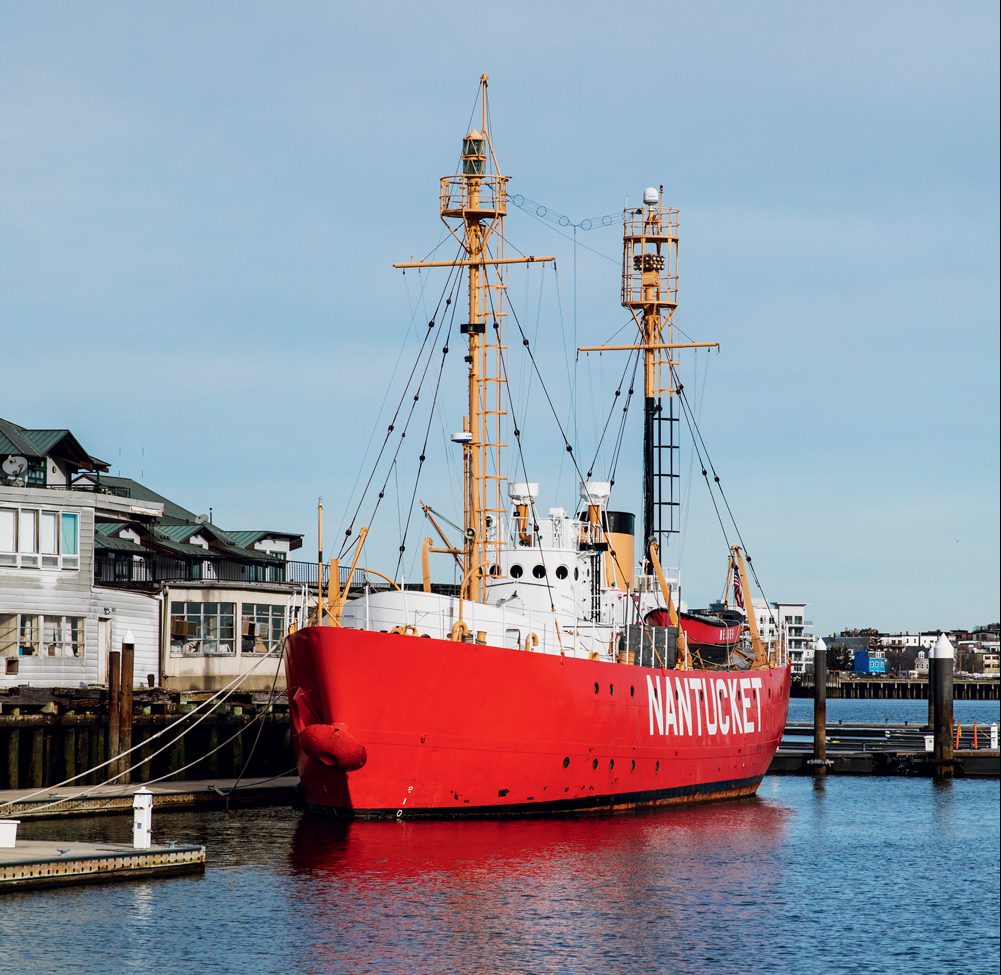 Shown at its berth in Boston, Nantucket Lightship 612 has been reimagined as a luxury houseboat—albeit one that was built to endure 150 mph winds and 100-foot waves.

Lightships, which are essentially floating lighthouses, have been used since 1854 in the Nantucket Shoals, an infamously shallow area southeast of the island that had claimed dozens of ships. The history of the Nantucket lightships includes wrecks and rescues, lives lost and saved, and a multitude of storms weathered. Lightships themselves have sunk; one was rammed by a sister ship of the Titanic.

Built by the Coast Guard for $500,000 in 1950, the vessel that Bill was interested in—Nantucket Lightship 612—had served the island from 1975 until 1983, an assignment that followed a 20-year stint off the California coast and four years in Portland, Maine.

At the open house, Bill found himself among a crowd of scrappers, who were keying the paint all over the ship to find out what metal was underneath. “That was profoundly disturbing to me,” he says. “When I got back to my office, I couldn’t think of anything else.”

With the auction slated to end in just a few days, Bill embarked on a whirlwind of phone calls and intensive study. Walking through the ship had made it obvious there were problems, but he didn’t know whether they were superficial or serious. So he learned everything he could, as fast as possible.

By the morning of the auction’s final day, Bill had resigned himself to backing out. But then Kristen looked him in the eye and said, “You know, ever since I met you, I’ve known how crazy you are. But until this moment I didn’t realize how crazy I am. We should absolutely do this.”

With seven seconds remaining in the auction, the Goldens placed the winning bid of $126,100. At the time, the lightship was the largest item ever sold on eBay. 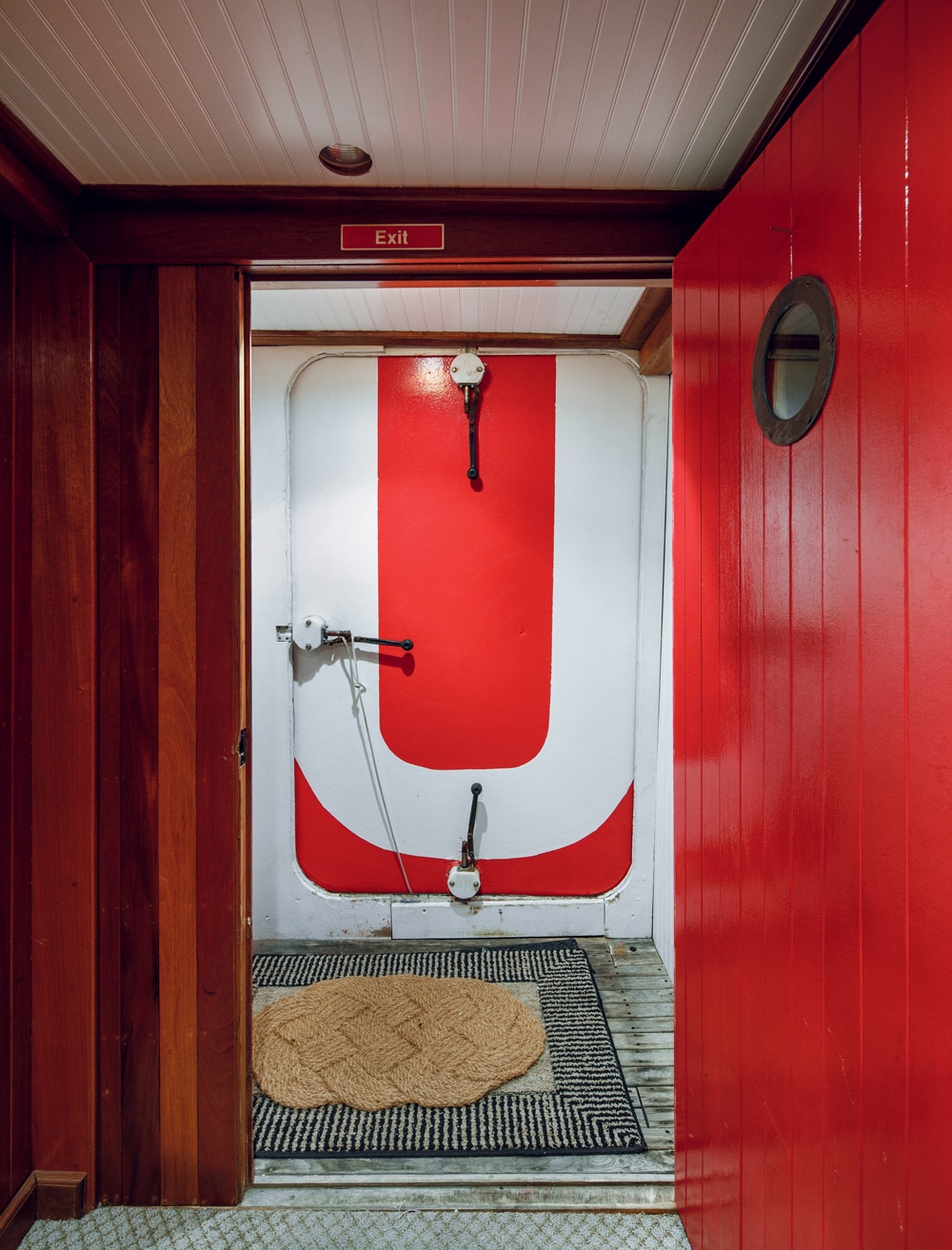 Putting out the welcome mat takes on a whole new meaning aboard a lightship. 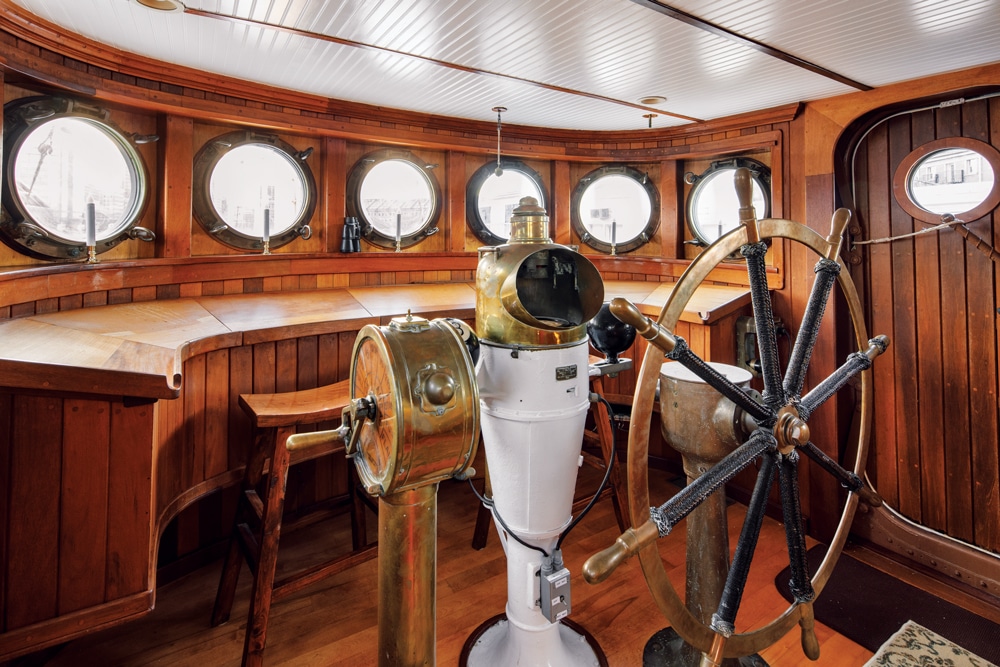 Relics of the ship’s former navigation system remain in the pilothouse.

When the couple started dismantling the interior of the lightship, they didn’t know exactly what they would do with it. “The challenge was, here we have one of the most historic ships in the world, and we are gutting the inside of it so that she’ll have [another] function,” Bill says. “We kept the outside totally historic, but when we decided to convert her into a luxury charter vessel, we worried that we were justifiably going to get tremendous blowback from crew members and the people who loved the ship. But that didn’t happen.”

After Kristen drafted architectural plans for the ship’s three decks, they began a comprehensive rebuild that would last nearly two years. The side of the ship was opened up to create a new entry. A new engine, generators, hydraulics, and navigation system were installed—as was more than four miles of wiring, plus plumbing and pneumatic operating controls.

The end result offers 4,000 square feet of living space on two levels, and a 2,000-square-foot exterior deck. The interiors are crafted from oak and mahogany. There are six cabins, each with its own bathroom, as well as a dining room, office, main salon, and den. The galley kitchen is big enough for three chefs to work side by side. 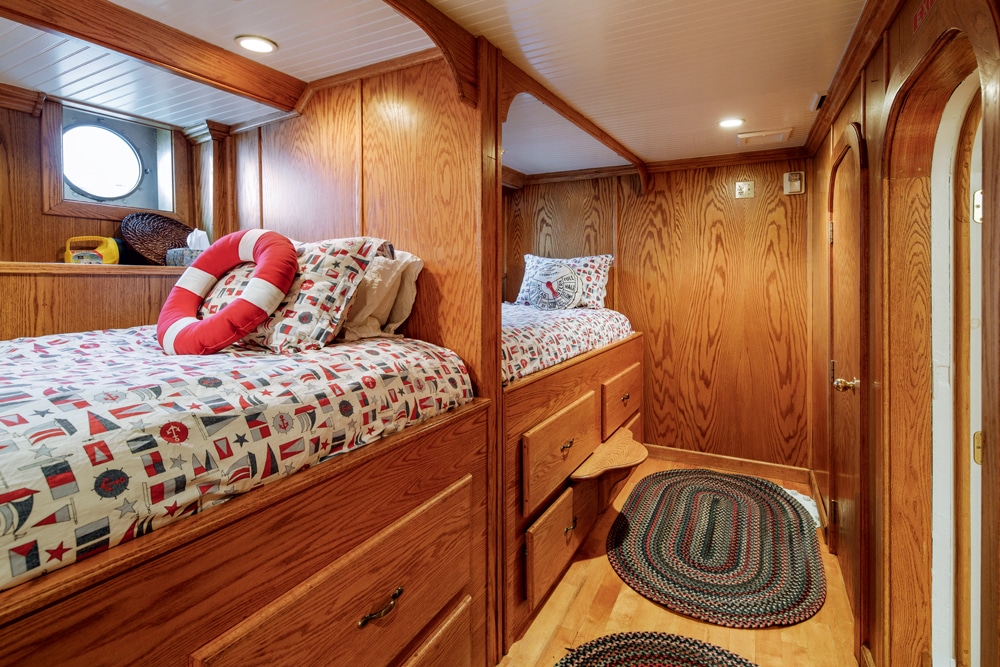 Oak and mahogany warm up the interior of the lightship, which boasts six cabins and a dining room that seats 12. 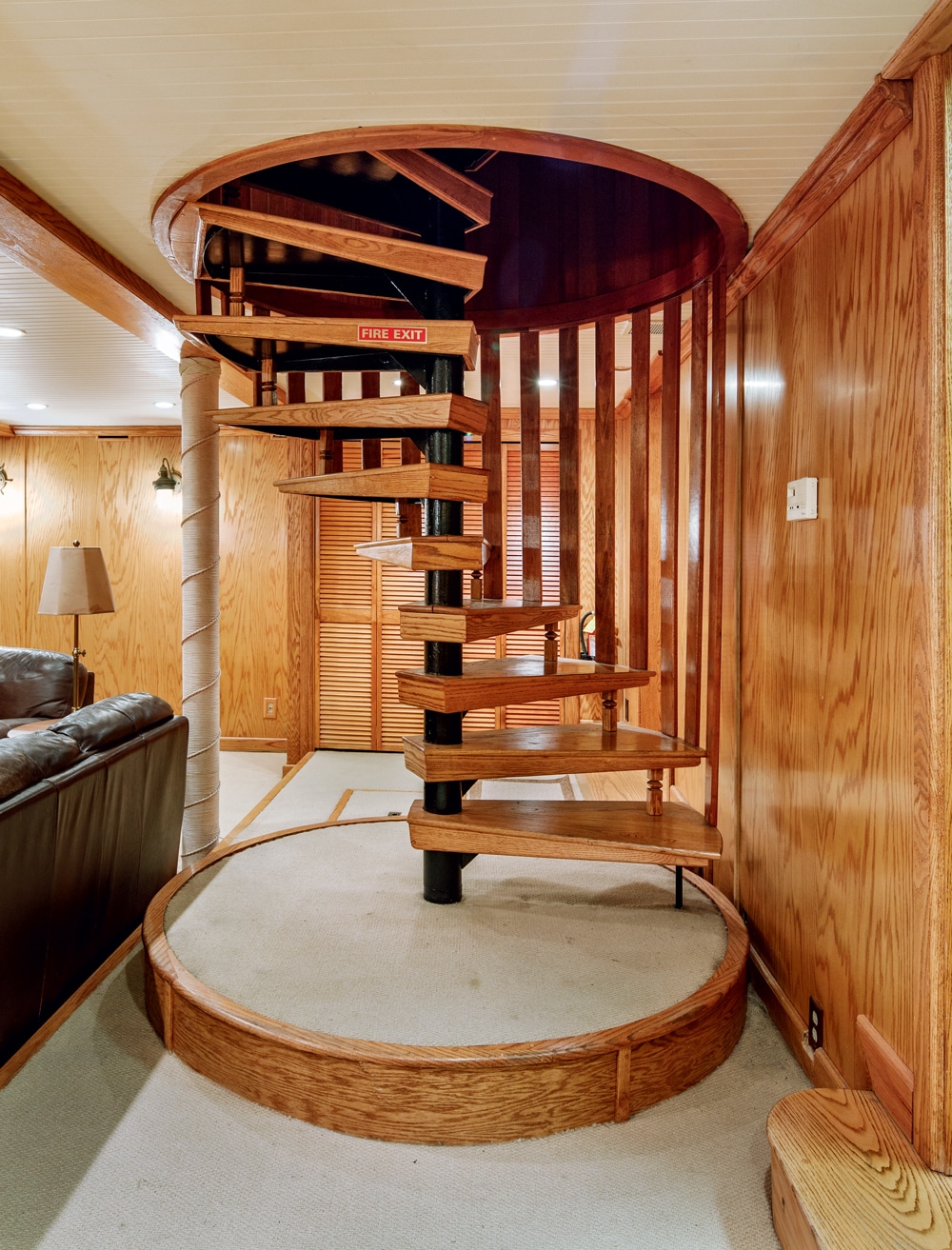 Moving between decks got a stylish upgrade with this open spiral staircase.

Even as they’ve maintained a home on land, the Goldens have spent much of the past two decades living on the lightship; their son, Braden, has grown up on it. But it’s also been chartered by a bevy of clients ranging from chef Todd English to deep-sea explorer Jean-Michel Cousteau. Senator Ted Kennedy rented it for Nantucket Race Week. Janelle Monáe held a launch party for her album Electric Lady on its deck.

Although it was always the Goldens’ plan to sell the ship eventually, they won’t hand it over to just anyone. “You aren’t just the owner of a ship,” Bill says. “You are agreeing to be a steward of history, of all the sailors and lives that sacrificed to be on this ship and all the immigrants whose aspirations were realized because of its beacon. It has to be someone who is willing to share that in some way.”

As for the Goldens? They’ve already got another ship to tend to: Nantucket Lightship 613, which they bought in 2015. Its interior has been extensively restored, and for the top deck, the Goldens are thinking about creating a restaurant. “To me, the lightship represents stretching toward the horizon,” Bill says. “So that’s where we’re looking.”

Do You Need to Pivot Your Business to Survive During This Pandemic? by @XLConsultingGro