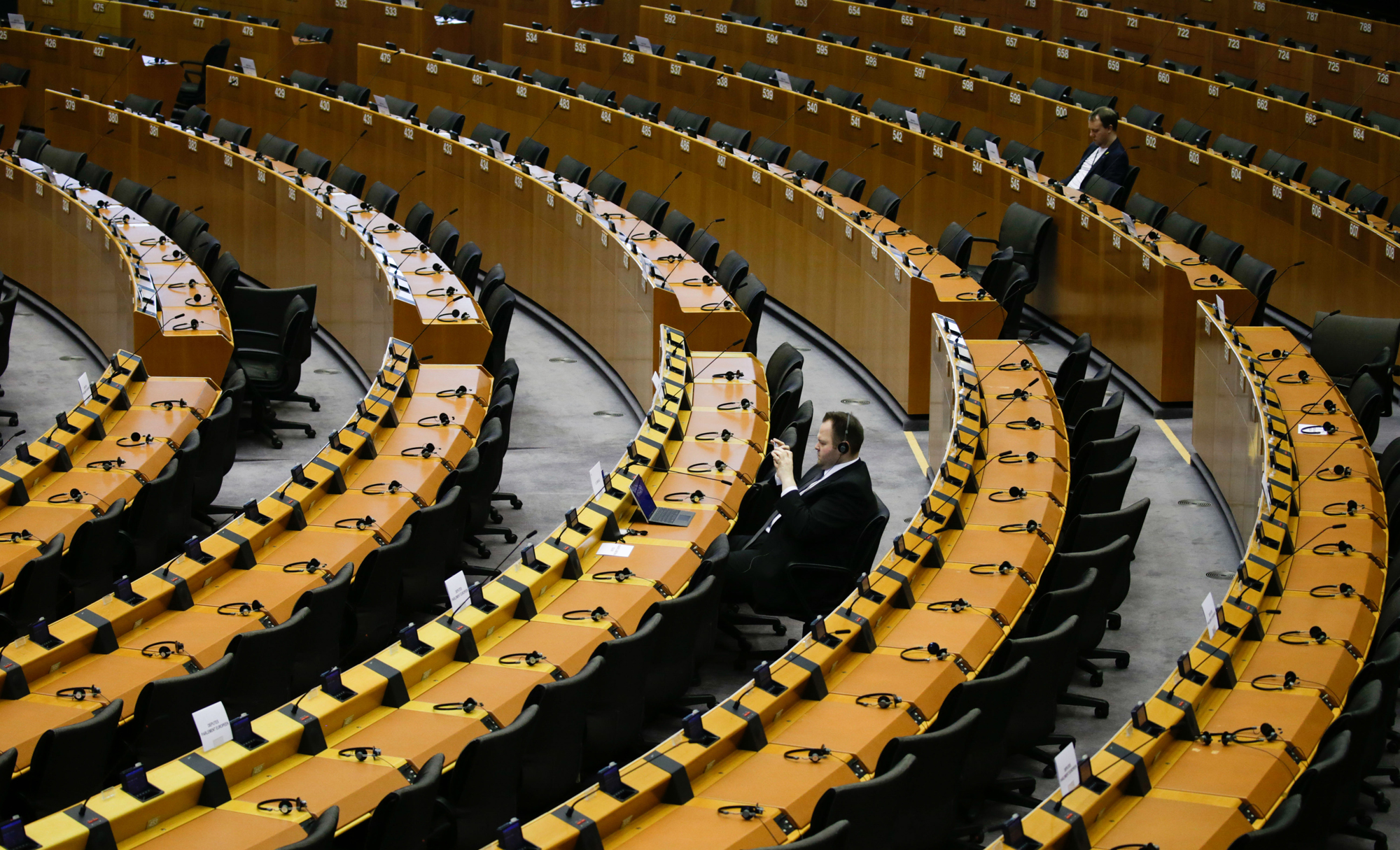 The chamber was almost empty, even for a presidential address. One lawmaker wore a face mask. And deputies voted remotely for the first time in the assembly’s 62-year history.

Welcome to the European Parliament in the age of social distancing.

The Parliament’s special one-day plenary session on Thursday, held to pass a series of coronavirus emergency measures, was a mixture of the strange, the surreal and the historic.

Only a handful of the Parliament’s 705 members sat in the hemicycle chamber in Brussels. The rest were scattered across the Continent, following via video-link and voting by email from their home countries.

When European Commission President Ursula von der Leyen delivered a speech chastising EU member countries for thinking only of themselves at the start of the crisis, she stood meters apart from any aides and MEPs.

Parliament President David Sassoli, back in the building following a fortnight working from home after a visit to his home country of Italy, called the session “special and atypical.”

“It is the first time that a democratic parliament uses remote participation, this has never happened before,” Sassoli told MEPs after a first round of emailed votes. “The European Parliament is called on to experiment with things in this way at a moment for great danger for our citizens.”

As experiments go, this one was quite radical.

The Parliament’s regular plenary venue of Strasbourg has been abandoned for the next few months, at least. As much as the Parliament has a physical home at all right now, it’s Brussels.

Plenary sessions are normally four days long. But on Thursday everything was crammed into a one-day marathon to push through three coronavirus-related measures, including freeing up €37 billion in EU funding for member governments and temporarily allowing airlines not to use their slots at airports.

Some of the Parliament’s usual quirks were suspended  — such as the “catch the eye” procedure whereby MEPs signal to the president that they wish to speak, and the blue cards raised to indicate a wish to question a fellow member.

Fewer ushers than usual roamed the chamber and they kept their distance from one another. Interpreters sat alone in their booths, rather than being crammed in with colleagues. Journalists were advised to stay away and watched via video stream.

Among the few MEPs who attended in person, Fulvio Martusciello of Italy wore a large white face mask. A Spanish MEP sported a new beard, perhaps a result of personal confinement.

In the Parliament, MEPs usually vote by raising their hands or by pushing a button on their desks to give their verdict on dozens or more amendments before adopting a final legislative proposal.

But on Thursday they considered only a few amendments as legislation was rushed through under an emergency procedure. And they voted from all across Europe by printing out a form, then signing, scanning and emailing it to the Parliament.

For some, such technological advances were long overdue.

“Corona drags the European Parliament into the 21st century,” tweeted Dutch center-left MEP Lara Wolters, above a picture of her smiling as she signed a ballot paper.

Bulgarian center-right MEP Eva Maydell also endorsed the innovation. But, she added, “this way of voting is only feasible for single votes. We need another solution for longer votes.”

Some MEPs apparently doubted their colleagues were up to the challenge of the new system. German Green MEP Rasmus Andresen asked his fellow lawmakers on Twitter not to “send your votes to all colleagues (dont push the „reply all“ Button). It’s good to be transparent, but i dont want to receive about 2000 emails with your votes in my inbox today.” (No older MEPs shot back by criticizing his lack of apostrophes or use of upper and lower case letters.)

Other MEPs complained about formatting issues with the first ballots that were sent to them, including trouble converting the documents into a PDF if they were using Apple devices.

Dita Charanzová from the centrist Renew Europe group told POLITICO the Parliament should have gone entirely digital and regretted that staff such as ushers had to attend, given that people are meant to be staying at home for health reasons.

“We are now a digital Parliament, no one should have to take a risk just for a few members in an empty room,” Charanzová said. “It’s ridiculous to see the Commission there, and some MEPs. We should have gone completely digital for this plenary and for all future plenaries until the crisis is over.