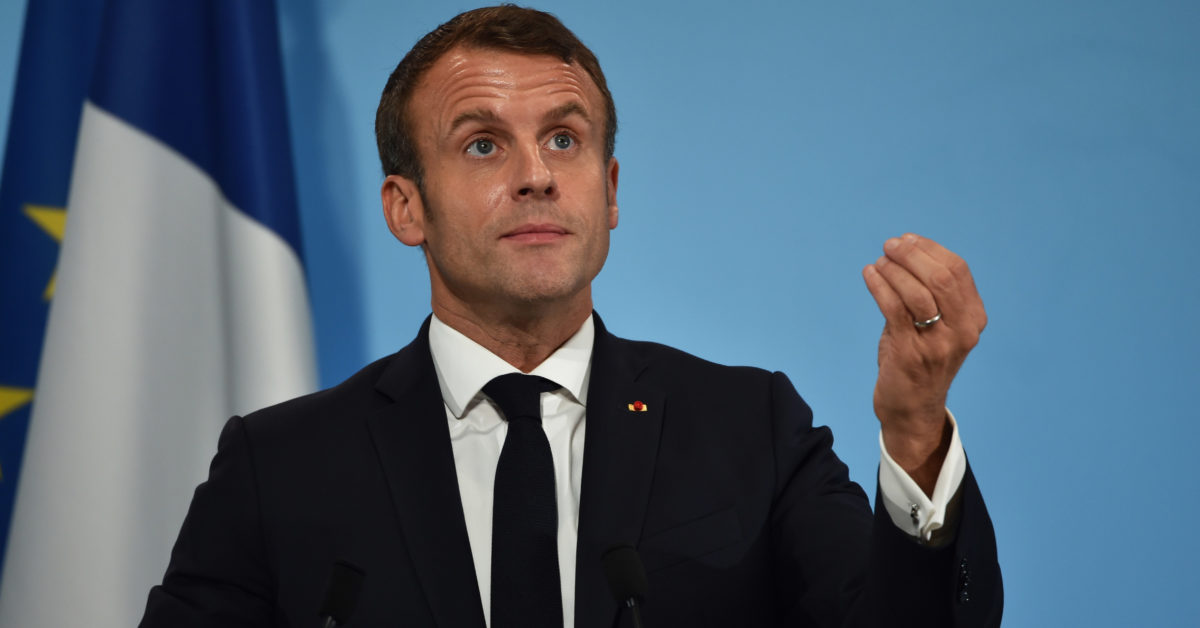 In Sarajevo, the capital, the chairman of the country’s tripartite presidency, Željko Komšić, on Friday summoned the French ambassador to demand an explanation of Macron’s remarks.

A headline on a scathing column on the Radio Sarajevo website screamed: “President Macron: Be Ashamed!”

"Macron, you are welcome to Bosnia and Herzegovina

Our home is not a time-ticking bomb!”

Message sent in Strasbourg from youth of Bosnia and Herzegovina

to the President of France

And in Strasbourg, young Bosnians attending the World Democracy Forum at the Council of Europe, posed for a photo with signs that spelled out a message to the French leader:  “Macron, you are welcome to Bosnia and Herzegovina, our home is not a ticking time-bomb.”

Macron, in an interview with The Economist published Thursday, was challenged about his leading role at a recent European Council summit in blocking EU membership talks for two Balkan nations, North Macedonia and Albania.

Macron, in response, said other EU countries also opposed enlargement talks and were hiding behind France. He said: “If you’re concerned about this region, the first question is neither Macedonia, nor Albania, it’s Bosnia-Herzegovina. The time-bomb that’s ticking right next to Croatia, and which faces the problem of returning jihadists, is Bosnia-Herzegovina.”

“Like the case of his predecessor, Mitterrand, Macron was not interested in the truth” — Faruk Vele, journalist

In his interview, Macron repeatedly stressed the importance of the EU exerting a positive influence on its neighbors. But his stance on North Macedonia and Albania has angered pro-EU leaders and activists in the Western Balkans and his comments on Bosnia-Herzegovina sparked similar reactions.

Muhamed Jusić, a spokesman for Bosnia’s Muslim community, fired off a statement accusing Macron of pointing fingers at Bosnia-Herzegovina when France was more culpable for any jihadist threat in Europe.

“Some 300 citizens, mostly women and children, have departed for Syrian-Iraqi battlefields from Bosnia and Herzegovina, while more than 1,900 have done so from France — double the number of any other western European country. These days it is expected that more than 450 of them will return to France,” Jusić wrote, according to regional news outlet N1. “I don’t see how this is a bigger problem in Bosnia than in France.

There were also signs that Macron, however inadvertently, had once again inflamed ethnic divisions.

While Komšić, the current chairman of the Bosnian presidency who is Croat, criticized Macron’s remarks and summoned the ambassador, the Serb member of the presidency, Milorad Dodik, praised and thanked Macron for what he described as a blunt and truthful assessment.

“Instead of the problem of returnees from battlefields in the Middle East and the true threats of terrorism in Bosnia and Herzegovina being discussed where it would be most responsible to do so, here everyone who does not want to remain silent on it is being attacked, and now it’s the turn of French President, Emmanuel Macron,” Dodik said, according to N1.

Dodik said that Komšić was not in a position to rebuke the ambassador. “There is no consensus on it within Bosnia’s Presidency,” he said.

Sefik Džaferović, the Bosniak member of the presidency, joined in the rebuttals of Macron.

“Since 2016 not one departure to battlefields in Syria was recorded. Bosnia and Herzegovina has undertaken measures to solve that problem,”Džaferović said, according to N1. “The basic problem of Bosnia and Herzegovina are the forces which want Bosnia’s division and Mr. Macron knows that. The international community is also to blame for that.

The Radio Sarajevo column, by journalist Faruk Vele, likened Macron to his predecessor François Mitterrand, who Vele said had failed to do enough to stop the nearly four-year siege of Sarajevo by Serb forces from 1992 to 1996, in which more than 10,000 people were killed.

“Like the case of his predecessor, Mitterrand, Macron was not interested in the truth,” Vele wrote. Addressing Macron’s interview remarks, as well as France’s efforts to block the EU membership talks North Macedonia and Albania, Velle added, “This is another betrayal of Bosnia and Herzegovina.”

Spain Cracks Down On Outdoor Drinking, Smoking In Renewed Push Against COVID-19