Born and educated in New York City, the spirited and stylish Isabella Stewart moved to Massachusetts in 1860 when she married Bostonian John Lowell Gardner Jr. The couple frequently traveled to Europe and the Middle East, which sparked and then nurtured Isabella’s interest in art. Interest led to amateur collecting, which turned into serious collecting after Isabella inherited her father’s fortune in 1891.

With dwindling space for display in their Back Bay home, the Gardners decided to establish a permanent museum for their growing collection, a venture Isabella took on solo after her husband’s sudden death in 1898. She purchased land in the little-developed Fenway neighborhood (Fenway Park, home of the Boston Red Sox, wouldn’t open for another 14 years) and got to work on Fenway Court, her name for her museum, which was designed to resemble a 15th-century Venetian palace. It officially opened in 1903.

From her private fourth-floor living quarters, Isabella continued to acquire new artwork and personally arrange the museum’s collection. When she died in 1924, her will contained an endowment of $1 million with the stipulation that her art be permanently exhibited “for the education and enjoyment of the public forever” and that nothing in the galleries should be changed, and no items be acquired or sold.

Perusing Isabella’s treasures is a joy. After entering via the lobby in the museum’s new wing, completed in 2012, you cross a glass-walled corridor to the original museum structure, known as The Palace, where three stories of galleries surround (and look down on) a glorious all-season garden courtyard.

The Isabella Stewart Gardner Museum collection is so fantastically varied, and the setting so unique, that it’s not hard to see why the Gardner is one of the most popular museums in Boston. It’s bright, yet cozy. Comfortable, yet refined. Visitors are just as likely to crane their necks to admire the lush view in the courtyard, or look down at their feet to marvel at the mosaic tiles, as they are to gaze at the art hanging on the walls. 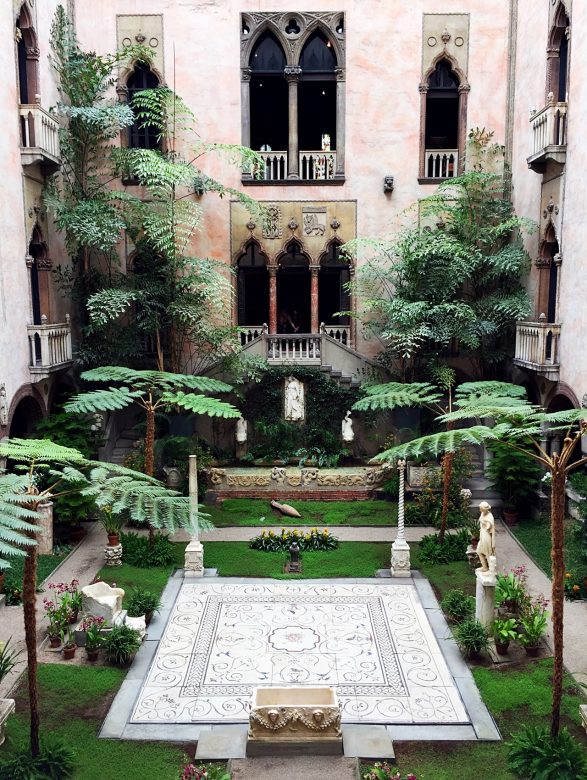 The all-season Isabella Stewart Gardner Museum courtyard (shown as it looked during my February visit) is arguably one of the most beautiful spots in Boston.

In each gallery, you’ll find laminated guides that identify the works displayed on or along each wall. Isabella didn’t label the artwork when it was first hung, and since her will stipulated that nothing in the galleries could be changed, the guides are a handy alternative to the traditional wall plaques. 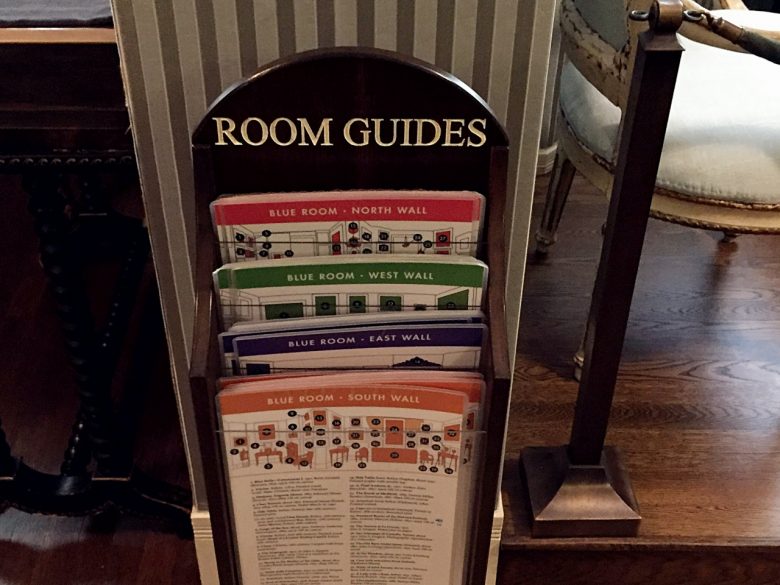 Helpful room guides provide information about the art on display. 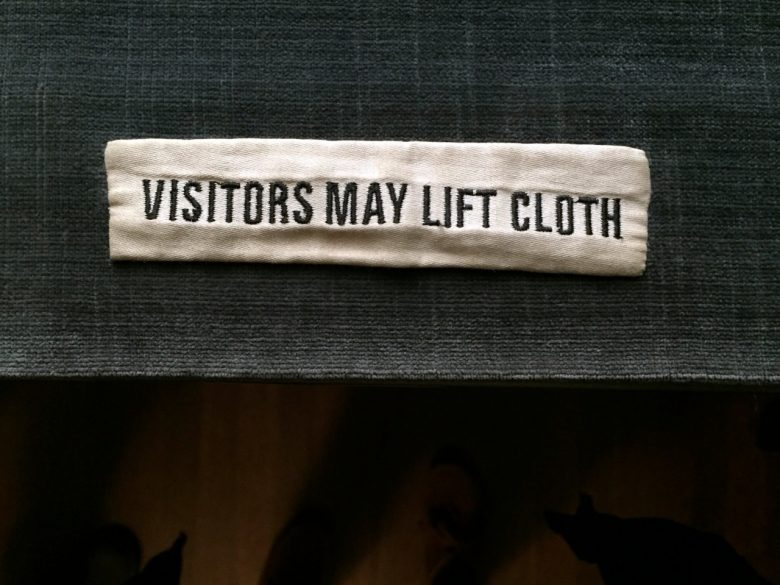 Some art and artifacts in display cases have a charming “Visitors May Lift Cloth”covering.

The Palace’s first floor is home to the Spanish Cloister, the Spanish Chapel, the Chinese Loggia, the Fenway Gallery, the Vatichino, the Macknight Room, the Blue Room, and the Yellow Room. 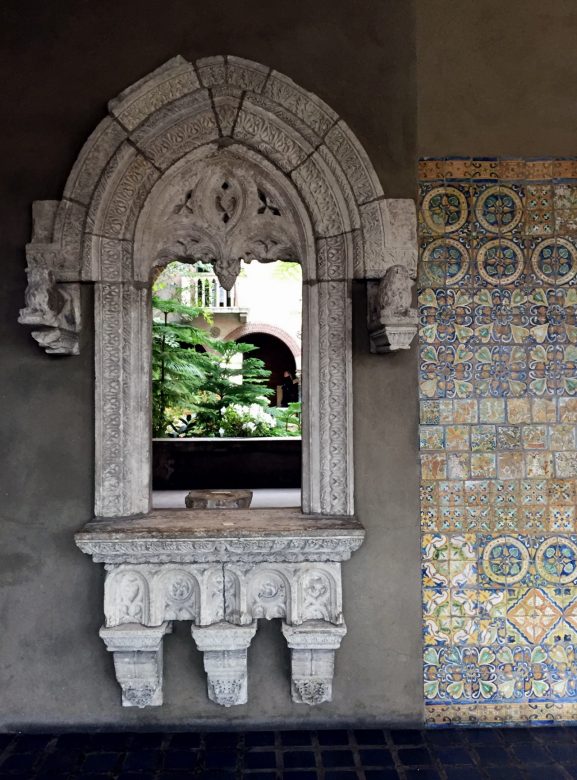 Looking toward the courtyard from the Spanish Cloister. 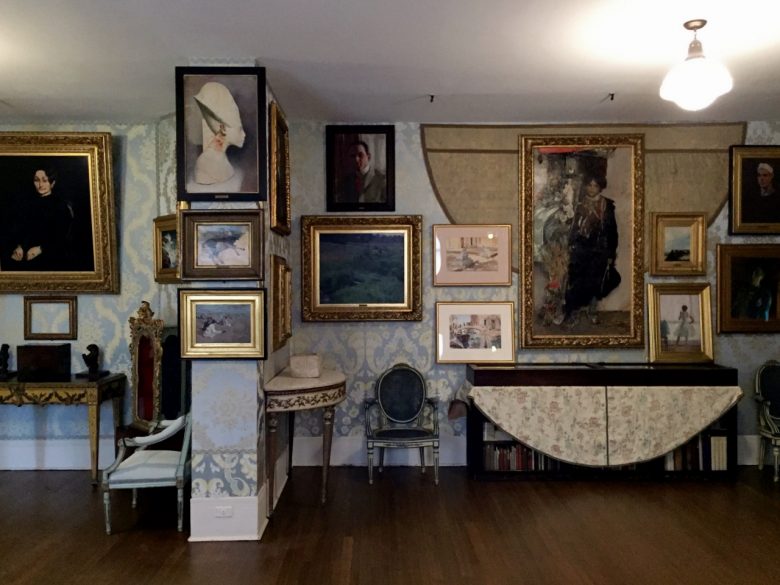 Blue Room highlights include works by John Singer Sargent, Ralph Wormeley Curtis, and Anders Zorn. Antonio Mancini’s The Standard Bearer of the Harvest Festival is prominently featured on the right. The empty frame under Portrait of Madame Auguste Manet by Edouard Manet, on the left, marks where Manet’s Chez Tortoni was stolen during the 1990 Gardner heist. 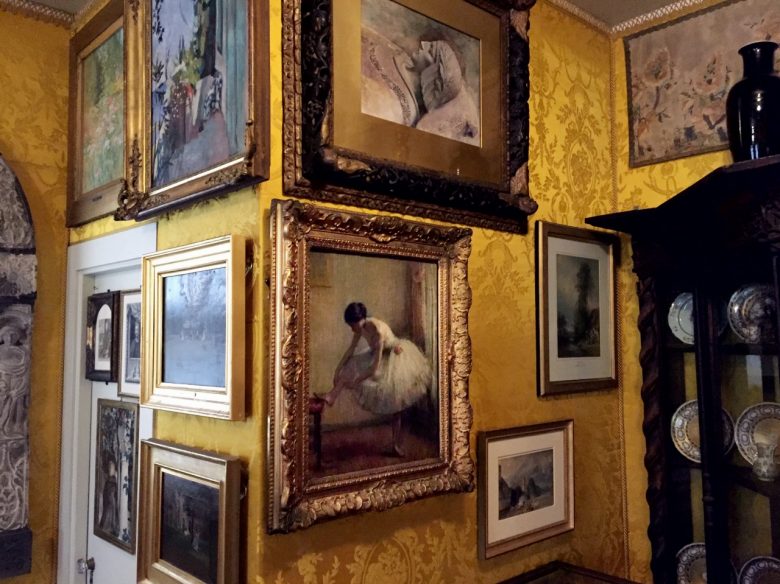 Yellow Room highlights include works by Henri Matisse, James McNeill Whistler, and Louis Kronberg, whose In the Dressing Room is prominent in this photo. The room once served as the museum’s concert hall and remains a tribute to music.

The Palace’s second floor is home to the Early Italian Room, the Raphael Room, the Short Gallery, the Tapestry Room, the Little Salon, and the Dutch Room. 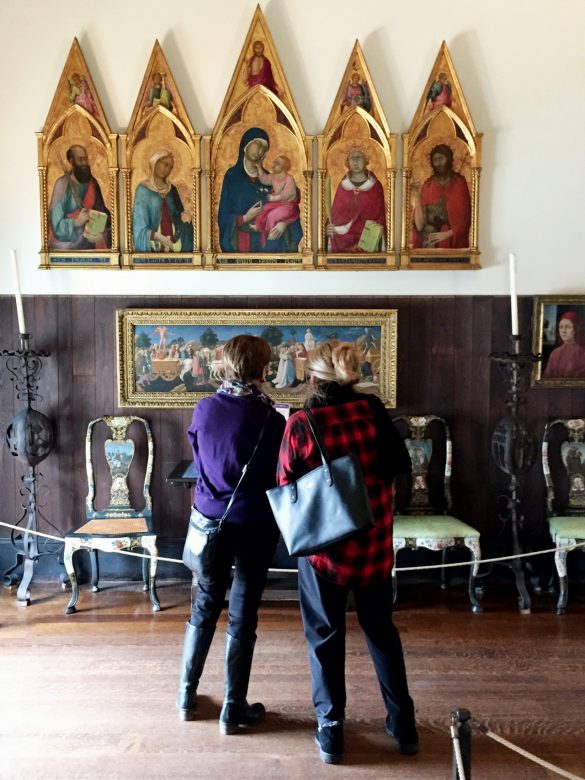 Early Italian Room highlights include works by Fra Angelico and Piero della Francesca. Seen here are Simone Martini’s polyptych Virgin and Child with Saints (top) and Francesco Pesellino’s The Triumphs of Love, Chastity, and Death (bottom). The room is a tribute to Isabella’s love for Italy and Italian Renaissance art. 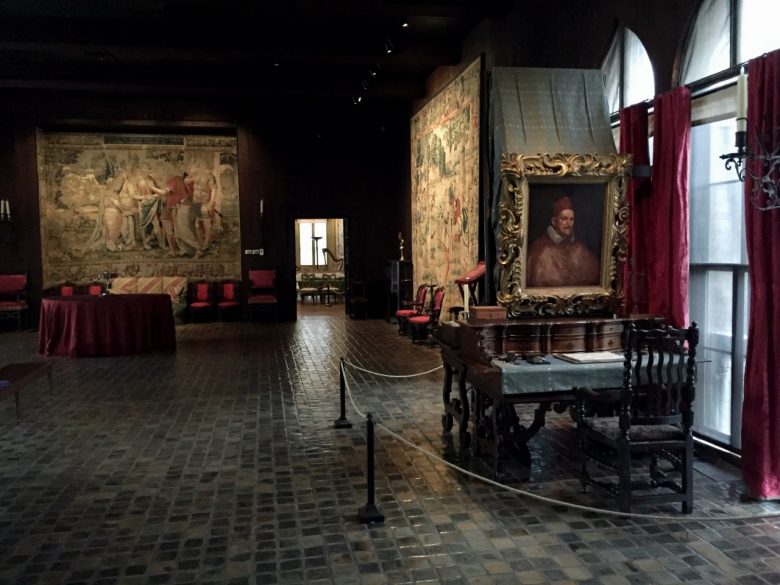 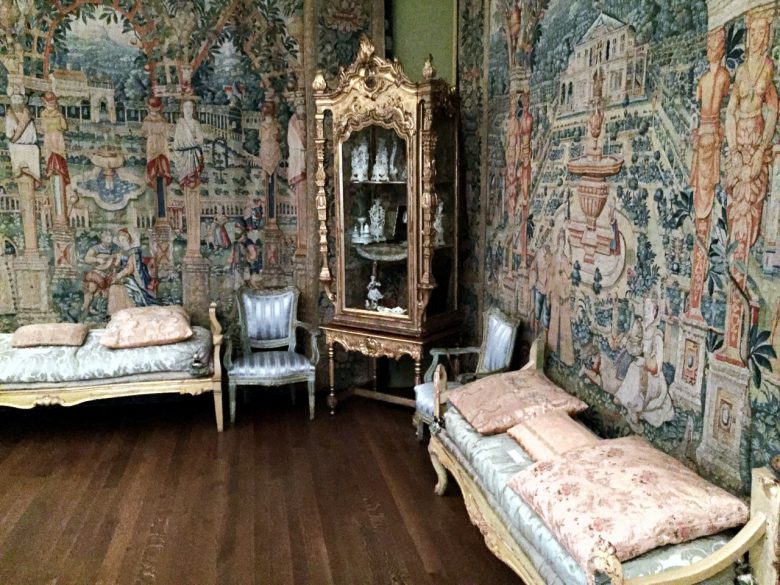 The Palace’s third floor is home to the Veronese Room, the Titian Room, the Long Gallery, the Chapel, and the Gothic Room. 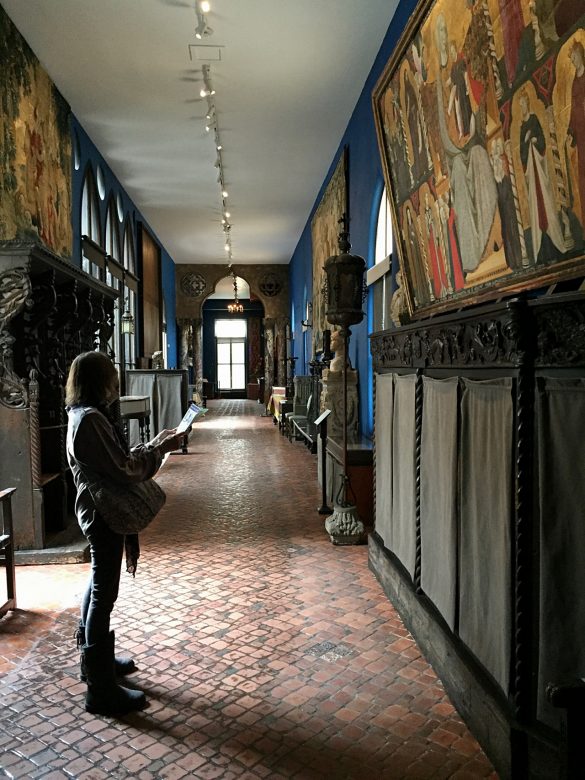 The Long Gallery serves as an art gallery, archive, library, and chapel. It appeared to be undergoing a renovation during my visit. 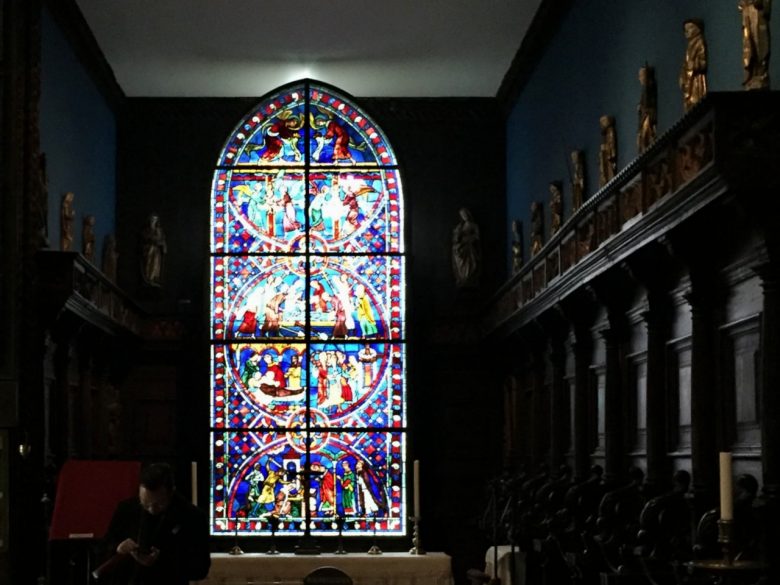 The Chapel at the end of the Long Gallery. The centerpiece Gothic stained glass window was from the cathedral of Soissons in France, and the consecrated altar was used by the devout Isabella for the celebration of Mass. 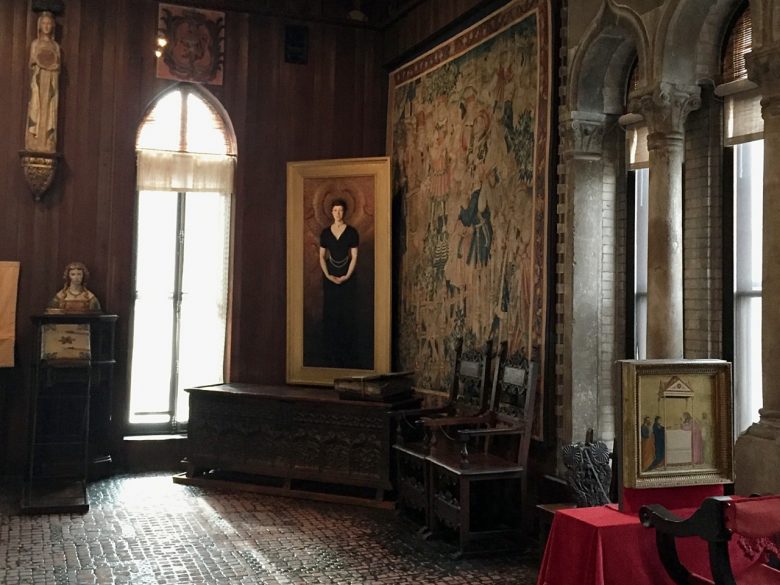 In the early morning of March 18, 1990, two thieves disguised as Boston police officers gained entrance to the museum and stole 13 works of art valued at an estimated $500 million, making it the greatest single property theft in the world. The case was especially puzzling because more valuable pieces went untouched. Despite efforts by the FBI and a hefty reward (now $10 million), the works have yet to be recovered. In recent years it’s come out that the FBI believes the thieves were members of a criminal organization based in the mid-Atlantic and New England, and that the loot resurfaced and came up “for sale” in Philadelphia during the early 2000s. Today, empty frames remind visitors of the missing works and the hope that they’ll eventually be returned.

A special section on the museum’s website lets you explore the art stolen in the Isabella Stewart Gardner Museum heist. 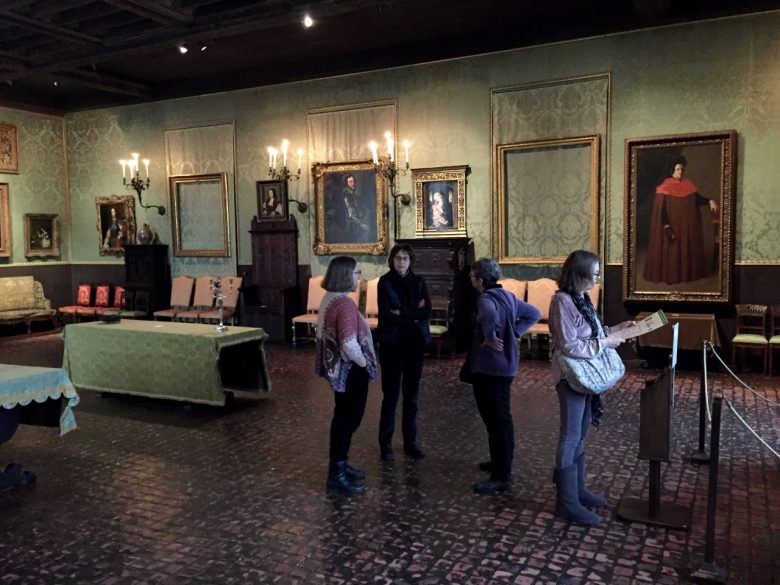 Evidence of the Isabella Stewart Gardner Museum heist in the Dutch Room. Empty frames represent the six works stolen here, including Rembrandt’s only seascape, Christ in the Storm on the Sea of Galilee, and Vermeer’s The Concert, thought to be the most valuable unrecovered painting, at over $200 million.

LEARN MORE: Read the 1992 Yankee Classic “The Night They Robbed the Gardner.”

The Isabella Stewart Gardner Museum is located in Boston’s Fenway neighborhood, just a few minutes’ walk from the Museum of Fine Arts. It is open every day except Tuesday, and offers free tours and talks, or audio guides for a small fee. Lunch and light bites are available in the on-site Café G.

Parking is available at a limited number of free and metered spots, but the museum also offers discounted parking at the next-door Simmons School of Management garage. The lots at the Museum of Fine Arts are also nearby. The closest stops to the Isabella Stewart Gardner Museum on the MBTA are the Museum of Fine Arts stop on the Green Line E train, or the Ruggles stop on the Orange Line.

Have you ever visited the Isabella Stewart Gardner Museum?

Become an Expert With ITIL 4 Certification