Please note that businesses, attractions, and events throughout New England have been closed and/or canceled in response to the COVID-19 health crisis. Please travel responsibly, and check with individual state guidelines and businesses before making travel plans.

The largest town in southern Vermont, Bennington encompasses three areas — Old Bennington, North Bennington, and downtown Bennington — and they’re all worth checking out. Outdoor adventures here are abundant, the brewery scene is growing, and many of the restaurants pride themselves on serving locally sourced cuisine. Bennington is home to Southern Vermont College, which has a standout art center and a one-of-a-kind museum dedicated to covered bridges. Just up the road from the SVC campus is the tallest man-made structure in the state, the Bennington Battle Monument. And treasure hunters, rejoice: Yankee has named Bennington one of the best towns in New England for antiquing. With all that in mind, here are some of our favorite things to do, places to eat, and places to stay in Bennington, Vermont. 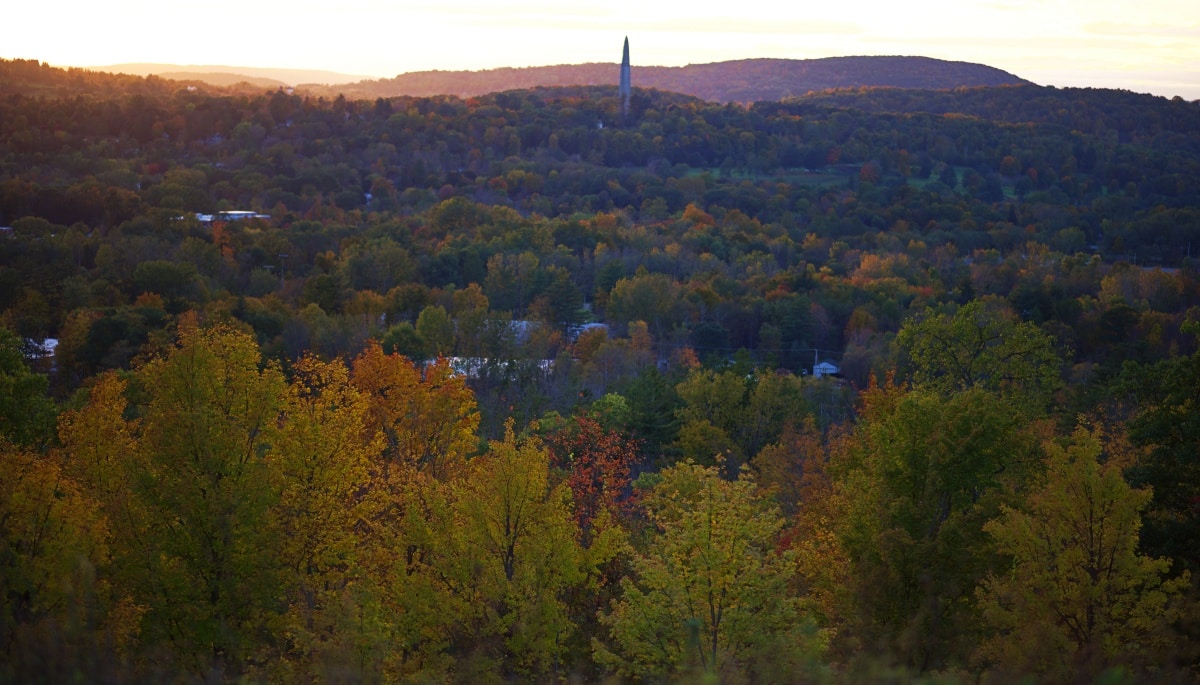 Bennington, Vermont | Things to Do

Situated right on Main Street in Bennington is the Oldcastle Theatre Company, a professional troupe founded in 1972 and made up of actors, writers, directors, and designers who have staged more than 300 shows through the years. Laumeister Art Center at Southern Vermont College is Bennington’s one-stop destination for all things cultural, thanks to its seven galleries, a 315-seat theater, numerous studios and classrooms, and the Vermont Covered Bridge Museum. Back downtown, Fiddlehead at Four Corners is a contemporary crafts and fine art gallery filled with glass, ceramics, jewelry, and other handmade pieces by artists from across the country. 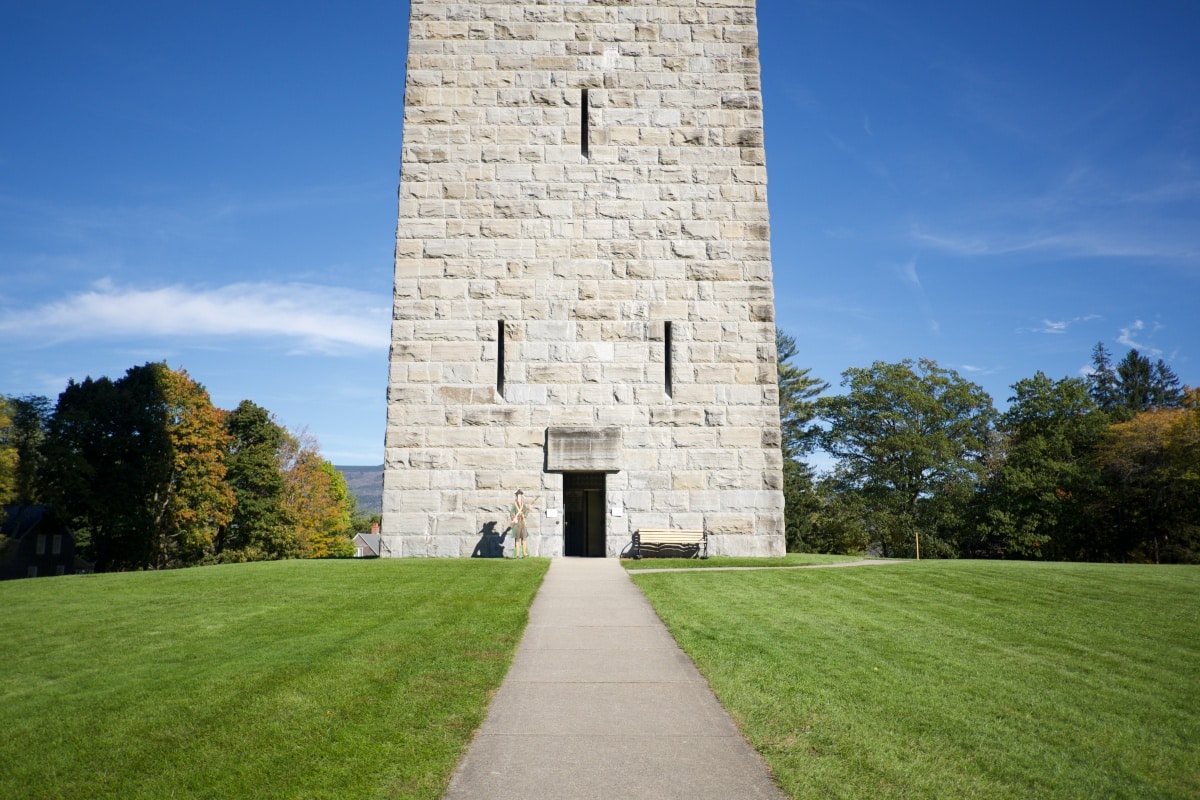 Rising above the trees is the 306-foot-tall Bennington Battle Monument, built to commemorate the August 16, 1777, clash with British forces that marked a turning point in the Revolutionary War. You can take in a view of three states from the monument’s observation deck, plus tour the grounds, see other monuments, and check out the gift shop. The world’s largest collection of Grandma Moses paintings can be found at the Bennington Museum, which describes itself as a museum of “art, history, and innovation.” In addition to displaying works dating from the 18th century to today, it offers outdoor walking trails for strolling and hosts a number of events throughout the year. The Park McCullough House is a 35-room Second Empire mansion (c. 1865) that’s considered one of the best-preserved Victorian mansions in New England; it’s open in summer for tours and public viewing. While you’re there, be sure to go for a walk in the Mile-Around Woods, which has more than six miles of farmland trails. Right nearby, in Shaftsbury, Vermont, is the Robert Frost Stone House Museum: Once the home of the acclaimed New England poet, the beautiful red Dutch colonial and its grounds (minutes away from Frost’s gravesite) today are open to the public.

Looking to scope out the southern Vermont craft beer scene? Head to Northshire Brewery, where everything from classic beers to innovative new brews are on tap (plus it’s dog-friendly, with a big backyard). 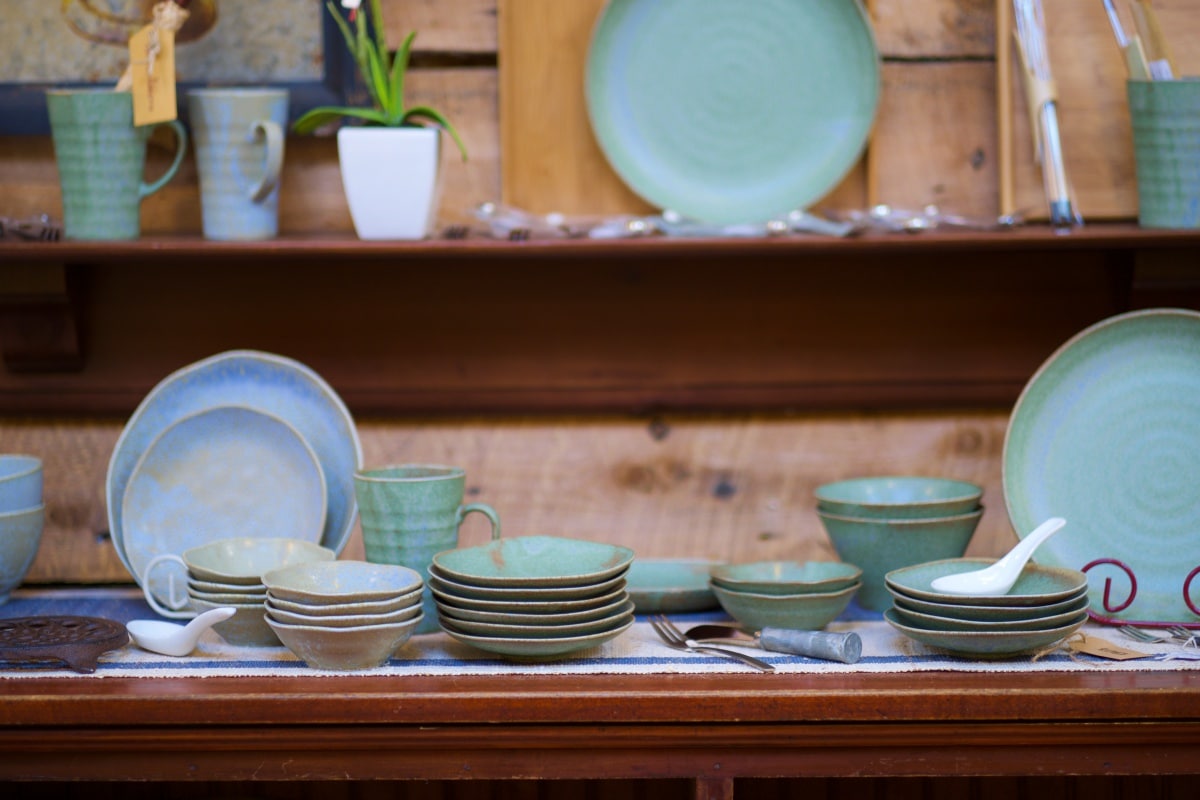 It’s not a trip to Bennington without a stop at Bennington Potters, which has been turning out stoneware pottery by hand since 1948. And since no two pieces are the same, all the mugs, cups, plates, bowls, cookware, and dinnerware here are guaranteed to make unique gifts. At the Village Chocolate Shoppe, sweet tooths can choose from freshly made chocolates, fudge, truffles, and buttercrunch, as well as meet Benny, a moose made from 100 pounds of chocolate. Bookworms will want to check out the Bennington Bookshop, the state’s oldest independent bookshop (c. 1928), for an impressive range of fiction, nonfiction, and kids’ titles. And a true Vermont market experience awaits at the Apple Barn & Country Bake Shop, a large red barn packed with baked goods, locally grown fruits and vegetables, and Vermont-made wines, hard ciders, beers, honey, bread, cheese, and maple syrup.

There are plenty of places to enjoy the great outdoors in Bennington. In a 3.6-mile round trip, you can take in some terrific views of Bennington by climbing the Harmon Hill Trail, which – with its steep rock staircases and switchbacks – requires some effort, but it’s worth it. White Rocks, otherwise known as Bald Mountain Trail, leads to an outlook with expansive views about 2.8 miles in (a 4-mile trek will get you to the summit of Bald Mountain, which is tree-clad). For those who prefer less elevation, the Norman and Selma Greenberg Conservation Reserve has 96 acres of meadows, wetlands, and wooded hillsides, with open trails to walk. In North Bennington, the Robert Frost Trailhead extends two miles to the farm once owned by Robert Frost.

In a converted storefront in Bennington’s historic downtown is where you’ll find this popular brewpub and restaurant, which has a full bar in addition to its own craft-brewed beers, plus family-friendly dining areas both upstairs and downstairs. 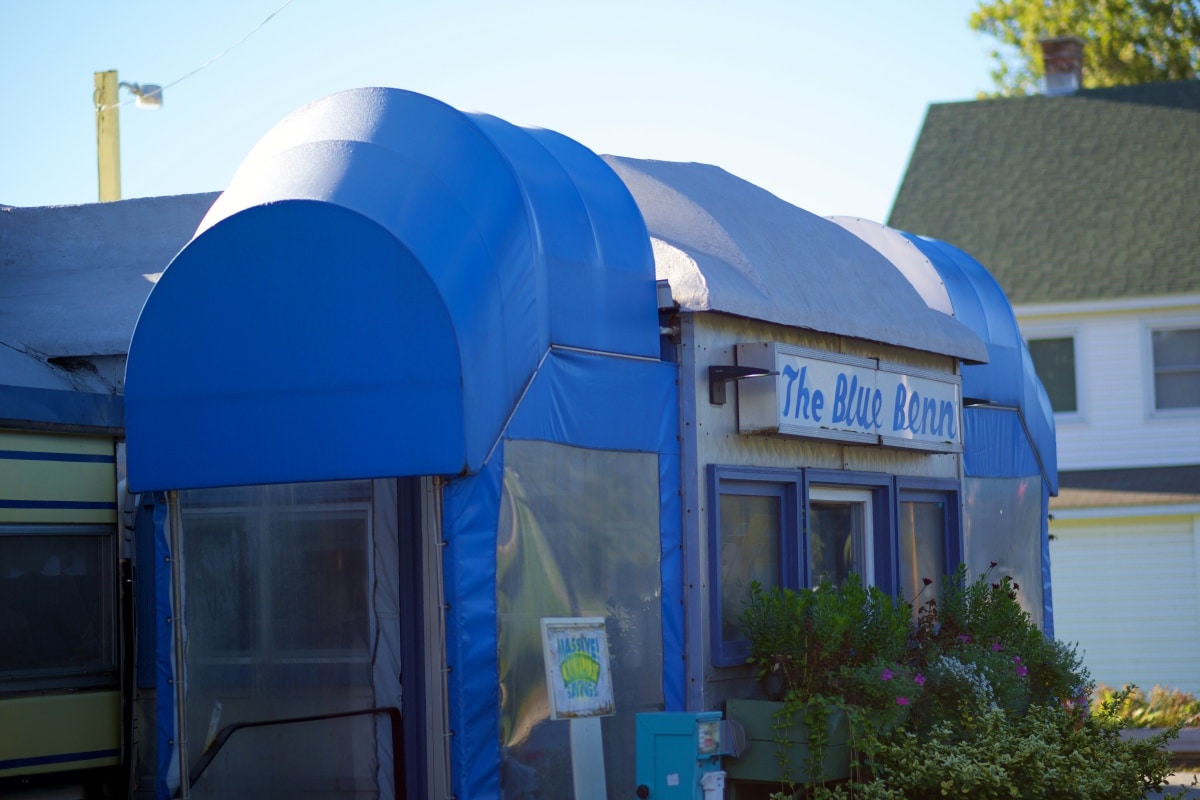 A converted 1945 rail car with booths, stools, and jukeboxes, the Blue Benn is a beloved Bennington institution. The menu features classic breakfast and diner food, along with some eclectic entrees and a number of vegetarian options. 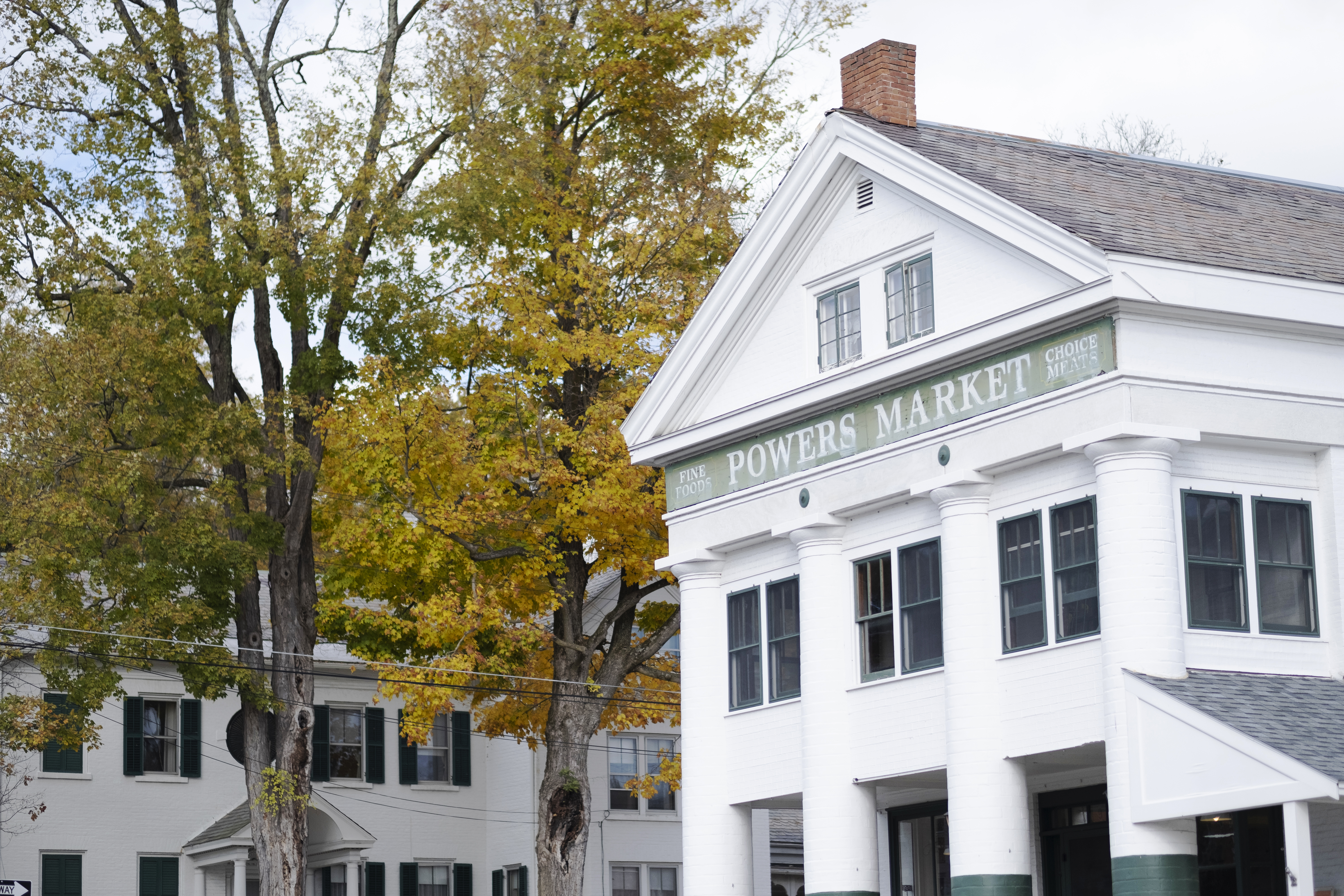 Equal parts country kitchen, café, deli, and country store, Powers Market on Main Street in North Bennington has everything you could possibly need during your Vermont visit, plus a full menu of breakfast items, hot and cold sandwiches, salads, and coffee drinks.

For eclectic Italian cuisine made with local ingredients, try Allegro on Main Street in Bennington. It has an extensive selection of wines, which means you’re sure to find the perfect pairing for your pappardelle with Bolognese, pan-roasted Arctic char, or any of the other delectable dishes on offer here.

Located in the oldest house (c. 1774) in the Bennington Village Historic District, Safford Mills Inn has three individually decorated guest rooms with historic touches (one has a claw-foot tub, another a Victorian mantel) and modern amenities. The inn’s dinner club and lounge, the Miller’s Toll, is right next door and offers tapas, drinks, desserts, and live entertainment. 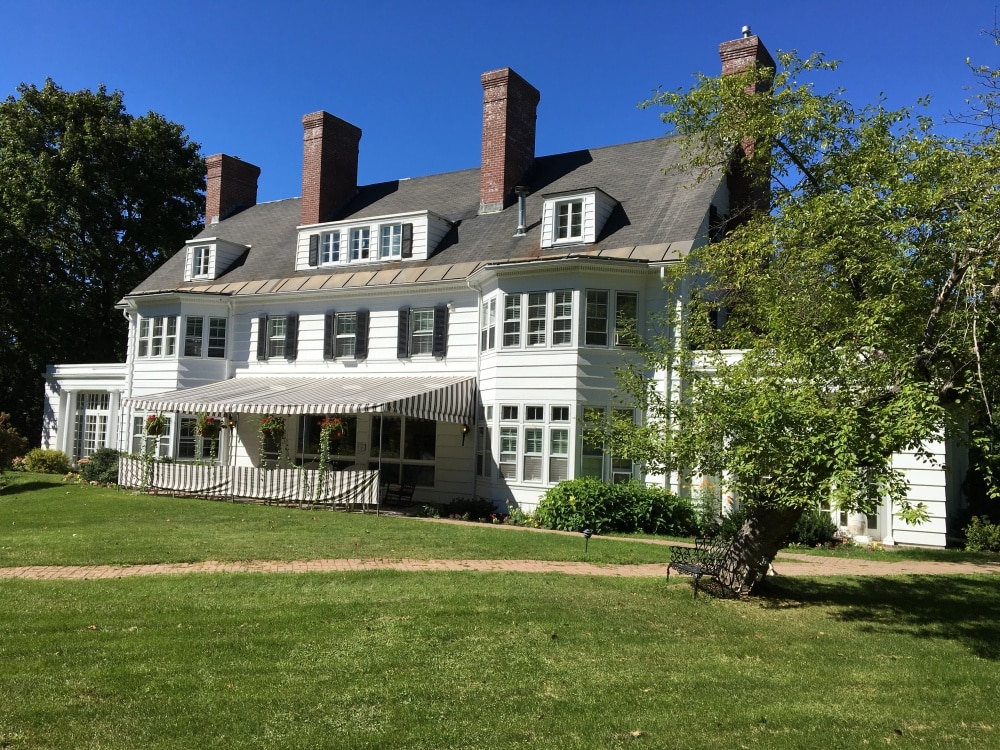 Set on an 18th-century estate, the Four Chimneys Inn has been a local landmark since the 1950s, when it was a fine-dining restaurant whose guests included Richard Burton, Elizabeth Taylor, and Walt Disney. Today it’s a genteel bed-and-breakfast that positions itself as a romantic getaway, with amenities that include in-room flowers and champagne.

With the option to tailor your stay around such things as cross-country skiing, cycling, horseback riding, spa pampering, and wine-pairing dinners, this gem of a bed-and-breakfast offers more activity packages than many larger establishments do. 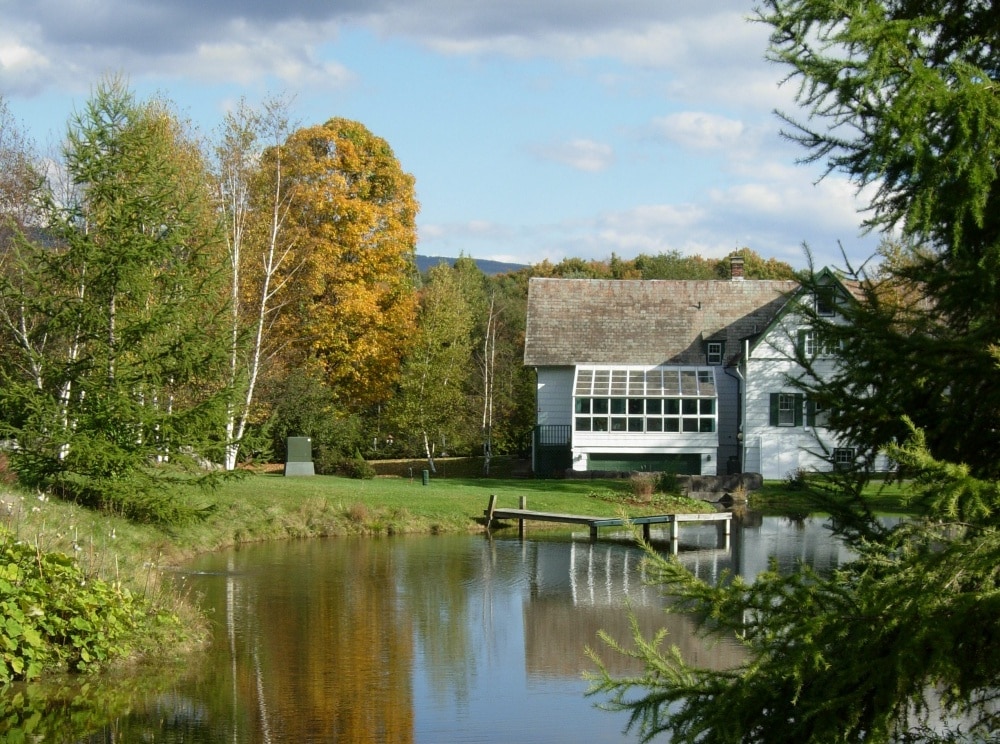 Nestled into 20 acres overlooking the Taconic range and the Green Mountains, Taraden Bed & Breakfast offers three spacious suites with private baths, including one in a separate cottage. Enjoy pond and pasture views from the glassed-in breakfast room, then climb aboard a horse-drawn carriage for a scenic tour.

Located off Route 7A, the Harwood Hill is a close-to-it-all motel set on a hillside with an apple orchard to one side and mountains to the other. There’s a range of room accommodations, from classic rooms to cottages and suites, all reflecting a modern, artsy vibe.

Have you ever been to Bennington, Vermont?

SEE MORE:
Bennington, Vermont | Could You Live Here?
Where to Stay in Bennington, VT | Hotels, Inns & More
10 Favorite Things to Do in Vermont | A Yankee Bucket List