Helicopter, bazooka or drone? Economic policy for the coronavirus crisis

Richard Simmons is a researcher at the University of Hertfordshire. Giuseppe Littera is co-founder and head of R&D at Sardex. Nigel Culkin is professor of enterprise and entrepreneurial development at the University of Hertfordshire. Paolo Dini is associate professorial research fellow in the department of media and communications at the London School of Economics and Political Science. Luca Fantacci is lecturer of economic history and co-director of research unit MINTS (Monetary Innovation, New Technologies and Society) at Bocconi University in Milan. Massimo Amato is associate professor of economic history and co-director of MINTS at Bocconi University.

The coronavirus crisis tearing through Europe is likely to have an economic impact that is unprecedented in our lifetimes. As such, it calls for economic interventions that have never been seen before.

Policymakers like to talk in military terms about monetary measures intended to bolster or boost the economy. When the European Central Bank announces a €750 billion bond buying program it’s firing a “bazooka.” If the U.S. government sends $2,000 to every American that’s “helicopter money,” after a thought experiment by the American economist Milton Friedman, in which he proposed stimulating the economy by dropping dollar bills from above.

We propose an update to Friedman’s idea, what we call “smart drone” money — a targeted invention in which consumers are provided with the equivalent of currency that they can spend on merchants that agree not to lay off permanent staff during a lockdown.

The economic impact of the crisis could not be more clear. Policymakers are faced with a difficult balancing act: to prevent new infections while mitigating the damage to the economy from the social isolation measures required to slow the spread of the virus.

European governments have a window of opportunity to act to mitigate the worst effects of this crisis — if they act quickly and smartly.

That damage will be dire. Lockdowns mean many workers can’t perform their jobs, even as frightened and cash-strapped consumers cut down on spending and firms rethink investments. China is estimated to have experienced an 18 percent fall in exports, a 23.7 percent dip in retail sales and a 13.5 percent drop in industrial production during the first two months of 2020, the worst period of its crisis so far.

In Europe, things could even be worse, as the slowdown caused by lockdown strategies is compounded by supply chain disruptions of goods that would have come from China. The seeds for a significant recession or even a depression are being sown.

Just how bad things will get is hard to tell. Our economic models are not built to handle unexpected “black swan” events on the scale of the current global pandemic, but anecdotal evidence from the 1918 Spanish Flu and modern surveys suggest the impact could be as significant as the 1991 breakup of the Soviet Union was to Eastern bloc states, where GDP fell between 30 percent and 50 percent over a two-year period — a potential shock many times larger than the 2008 financial crisis.

European governments have a window of opportunity to act to mitigate the worst effects of this crisis — if they act quickly and smartly. But they will need every tool in the box to do so.

“Bazooka” measures will be necessary to stabilize the financial system by flooding liquidity into the market, as happened in 2008. In the short-term, this will be crucial to prevent financial institutions from collapsing and ensuring commercial banks maintain credit lines and credit flows.

The wisdom of using “helicopter money” is more suspect. There are serious drawbacks to such a strategy. How much stimulus is achieved will depend on how much of that money actually goes back into the economy.

In times of uncertainty, people tend to place more money in their savings out of fear for what the future will bring. It’s also possible that they won’t spend their money on domestic goods and services but on imports. The German experience in the early 1920s also indicates that too much of this type of intervention can lead to runaway inflation.

But it’s also true that businesses need help, especially the smaller ones, and that the plans currently on the table — loan guarantees and grants — are likely to be inadequate. The commercial banking system functions poorly when it is under stress, and the sector has a habit of gaming government support to protect its own balance sheets. Grants take time to apply for and process; by the time money arrives, it could already be too late.

“Smart drone” money solves many of these problems. Rather than sprinkle money in an untargeted fashion it delivers it directly to where it is need most: the crisis-hit consumer and the small businesses struggling to survive. 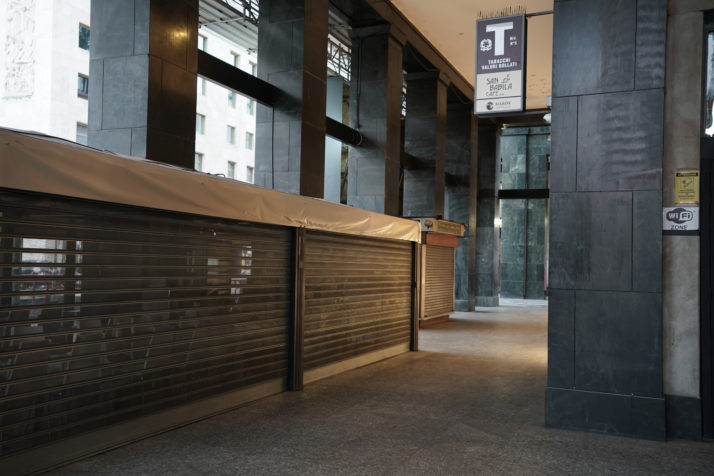 A trial run of the system is already being tested in Sardinia, where households are provided with digital “tokens” they can spend using their smart phones. These tokens are fully backed by cash, but they can only be spent at participating traders — in this case small firms and firms in specific sectors such as hospitality — on condition that these firms continue to employ their permanent staff throughout the lockdown.

Households can exchange the tokens for current or future purchases — such as a voucher for a restaurant meal, valid for a number of months after the end of social distancing restrictions. The participating merchants either swap the tokens for cash or can trade them with other participating businesses.

This helps both the business and the consumers. The merchant gets cash it can use to survive during the social distancing closure; the household gains a benefit in terms of a good or service (even if it is in the future), and there is minimal leakage in terms of savings or imports.

The software has already been tested and can be easily implemented elsewhere. Given the steep challenges we face, and the urgency of rising to the challenge, Europe would do well to embrace “smart,” well-targeted drones rather than “dumb” helicopters to drive stimulus.

Trump is an authoritarian weakman