The town of Concord, Massachusetts, just 20 miles west of Boston but with major small-town charm, holds a special place in the heart of many Americans. What was once the site of seasonal Indian camps, and then a sleepy New England village, became something else entirely one April morning in 1775 when one of the first battles of the American Revolution was fought in Concord and later immortalized in Ralph Waldo Emerson’s “Concord Hymn.” Emerson, along with the likes of Henry David Thoreau, Nathaniel Hawthorne, and the Alcott duo of Bronson and Louisa May were part of Concord’s mid-1800’s literary and transcendental flowering, for which the town is also famous. 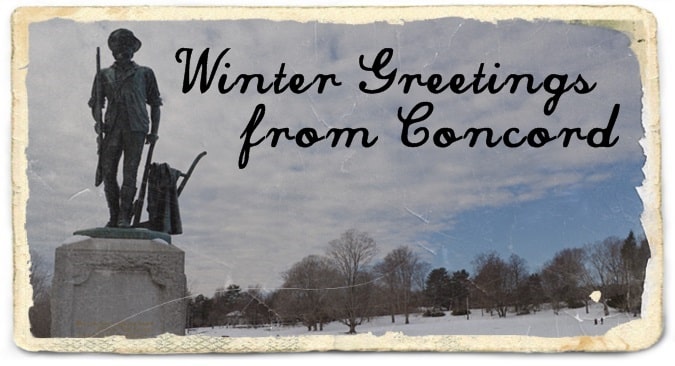 I spent a recent winter Sunday in Concord with my trusty comrade in all things historic – my mom. Thanks to a generous dump of snow a few days earlier and lingering bitter cold temperatures, we dressed in layers, unearthed our warmest winter mittens, and set out for a day of fun (and lunch, of course – no excursion should be without something edible to look forward to) in this treasured New England town.

The day began at the North Bridge section of the Minute Man National Historical Park, where the famous “shot heard ‘round the world” was fired on April 19, 1775. The brick visitors center was closed until March, but we traipsed through the snow towards the bridge with a handful of others (some clearly visitors like us, some locals walking their dogs or jogging along the plowed path we failed to notice until it was too late). 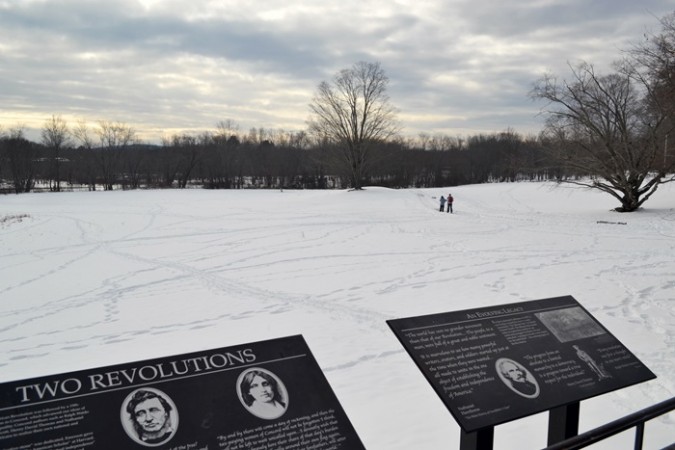 As always, the sight of the “Old North Bridge” induces a soft sigh of delight, but not just for history buffs. Even in the deep cold of winter, its banks blanketed in snow and the Concord River frozen underneath, the bridge (replica or not) is beautiful. 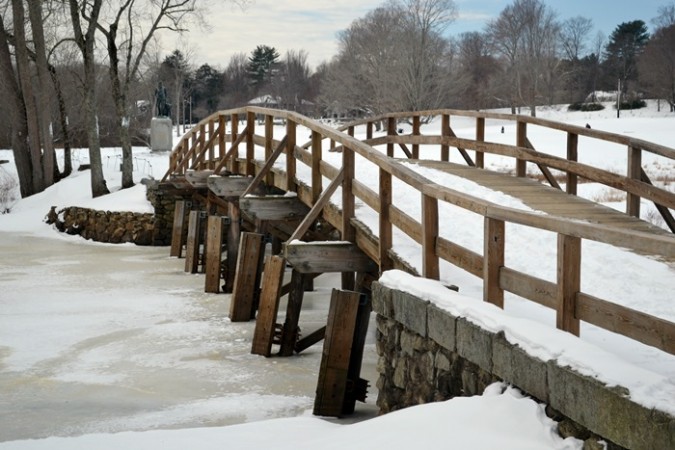 For history lovers and patriots, of course, the bridge represents a watershed moment in American independence. Along with the 1836 Memorial Obelisk and 1875 Daniel Chester French Minute Man statue that flank each side (the latter carved in bronze from seven Civil War cannons), not to mention the somber Grave of British Soldiers (where two bodies lie), the site is a spot for reflection and serenity. 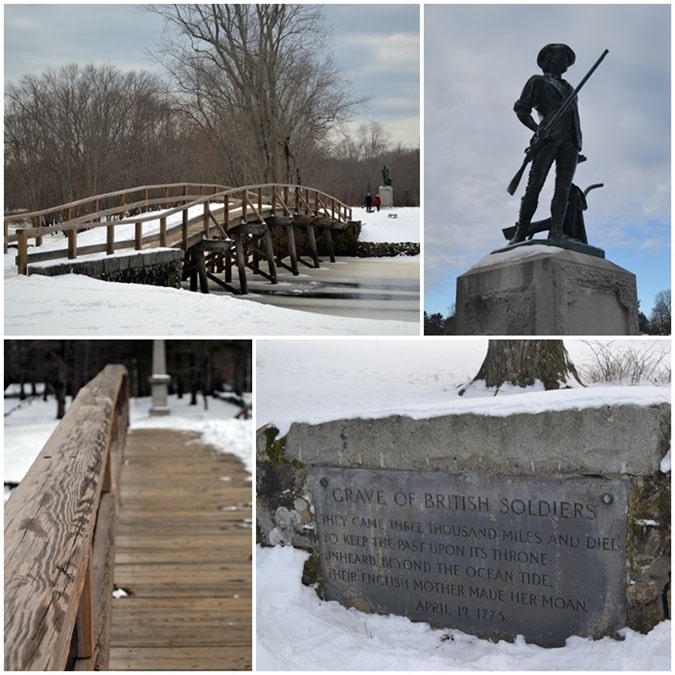 Monuments at the Old North Bridge.

Back at the car, we warmed our hands and headed towards the oblong Monument Square (named for its 1866 Civil War memorial obelisk) and Concord’s quaint downtown. A stroll around the upper square (watch out for cars!) takes you past sights like the popular flag-and-wreath decked Colonial Inn… 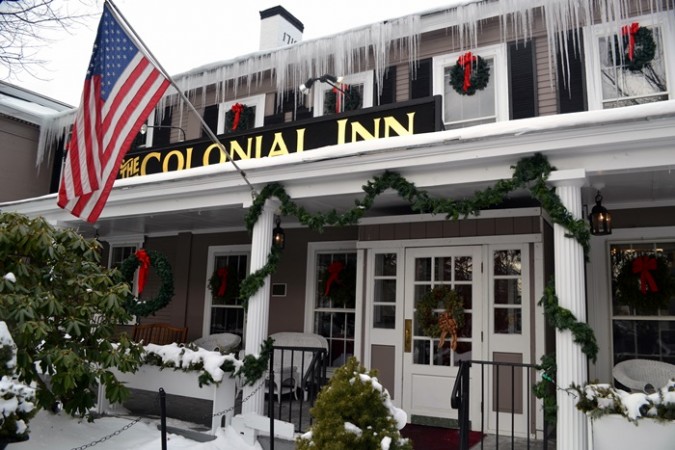 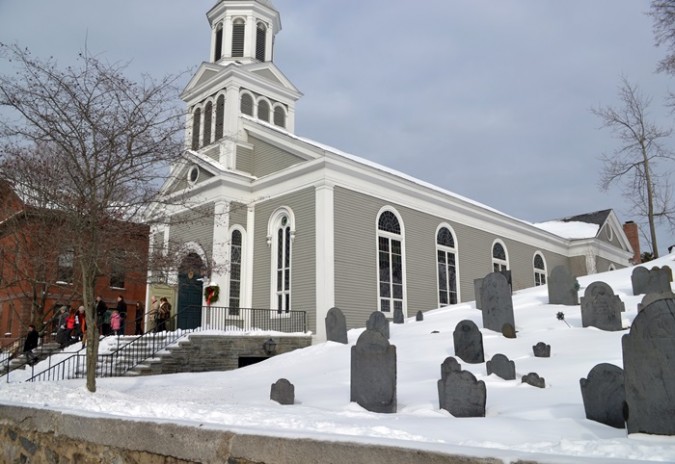 Not to mention the First Parish Church, and Wright’s Tavern, where Concord minutemen assembled on the morning of the battle, and British officers refreshed themselves afterwards. 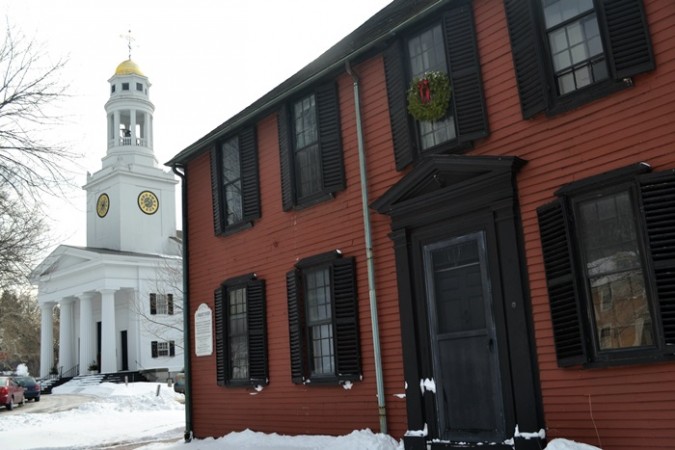 Heading down Main Street (and over to Walden Street), we browsed in some of Concord’s many shops, including Grasshopper Shop of Concord, The Cheese Shop (which, unfortunately, is closed on Sundays), and The Concord Bookshop….

But for this mother and daughter pair, we had our best luck at Thoreauly Antiques. Inside, Christie Murphy (one of the shop’s dealers) chatted with us about the shop’s history and offered some suggestions for lunch (since my top choice of cheese was not to be!), and my mom picked up an early 1980’s “practically perfect in every way” Mary Poppins figurine. 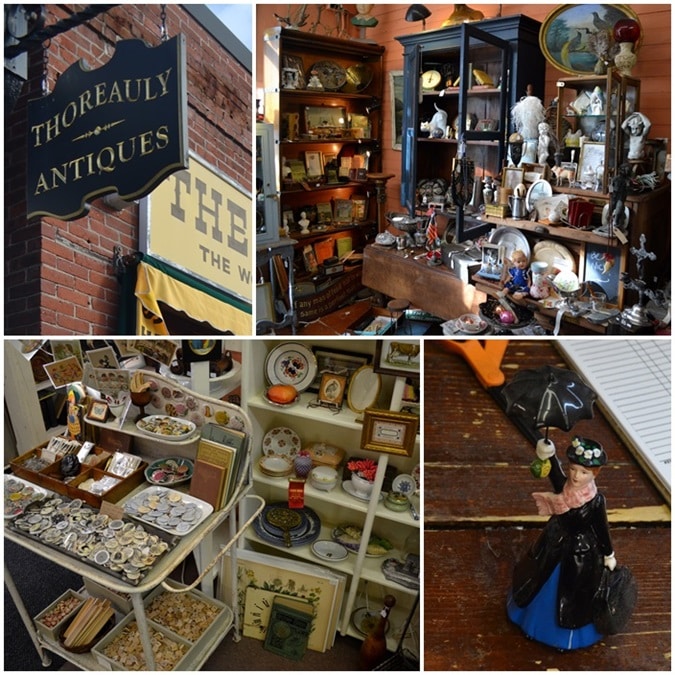 Items for sale in Thoroeauly Antiques, plus a special Poppins purchase.

After all that strolling and shopping it was time to eat, so we headed across the street to the always-busy Main Streets Market & Cafe for sandwiches. 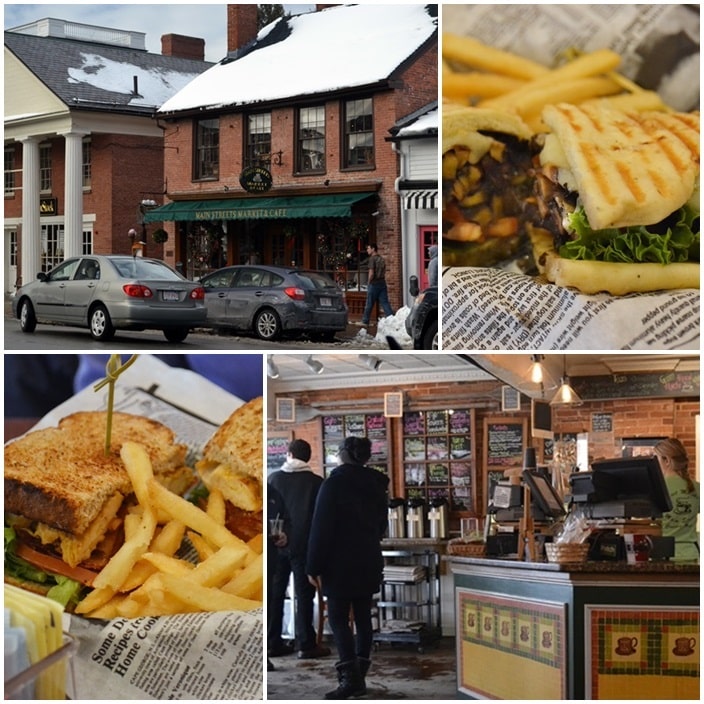 Calorically restored, we admired the houses of Concord literary darlings but saved the tours of the Wayside (former home to both Hawthorne and the Alcott family) and Emerson’s house for a future visit. I’d toured Louisa May Alcott’s Orchard House (again, with my mom in tow) last spring.

House-hunting complete, we next made our way to the nearby Concord Museum. Housed in a sprawling cluster of connected brick “houses” and with a collection dating back to 1850, the museum calls itself “the one place where all of Concord’s remarkable past is brought to life,” and they’re right. 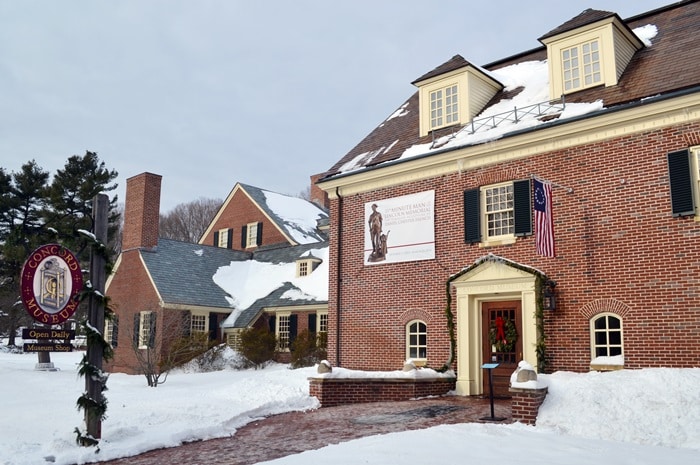 The residents of Concord have long valued the role the town has played in the nation’s patriotic and literary past, and many salvaged and donated objects from Concord’s past are on display, including Revolutionary War artifacts, staged period rooms (some with furniture dating back to the 1600’s), one of the 1775 lanterns from the Old North Church, the desk where Thoreau wrote Walden and “Civil Disobedience,” and even a flawless recreation of Ralph Waldo Emerson’s study. 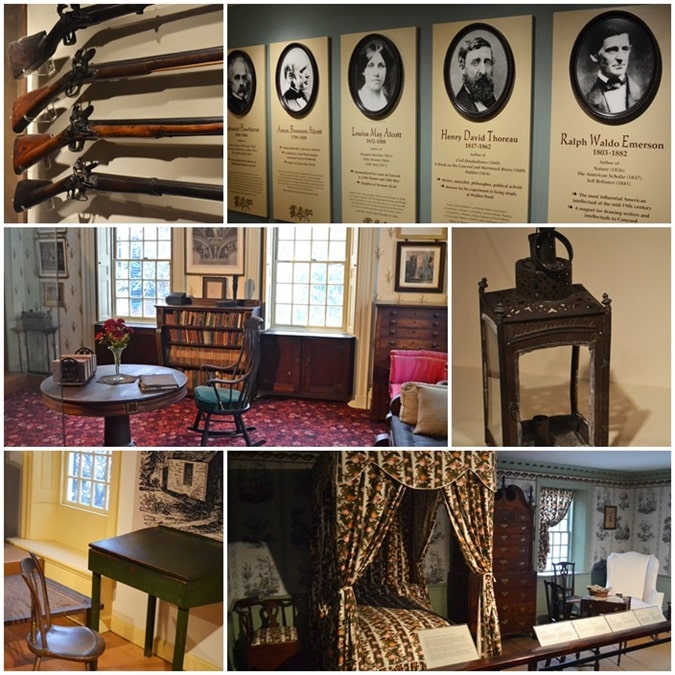 Revolutionary War weapons and one of the lanterns from the Old North Church are on display at the Concord Museum, as are tributes to Concord writers like Emerson and Thoreau, plus period furniture displays.

After filling our heads and marveling at the museum’s current exhibit on sculptor Daniel Chester French (the artist behind the Minute Man at the Old North Bridge and the Abraham Lincoln in Washington D.C., among other things) we made one last stop for provisions at the nearby Nashoba Brook Bakery in West Concord.

Despite a long day, other Concord treasures like Sleepy Hollow Cemetery and a side-trip to Walden Pond would have to wait. The sun was getting low, and it was time to head home. Thankfully, the magic of Concord’s past is a lively and treasured part of its present (and surely future), and that, coupled with its 4-season appeal, ensure many future visits.

Have you ever visited historic Concord, Massachusetts?

France, Germany set to pay the most under EU plastics tax