How to Make Easy Pie Crust From Scratch | Steps in Photos

How To Start Working As A Freelancer

Pie is such an evergreen, adaptable dessert, but many home cooks are intimidated to make a homemade pie crust. I used to find it daunting, too, but over the years I’ve come up with a easy  pie crust from scratch recipe that I truly love. In my mind, it has just the right proportions of butter, water, flour and salt. And that’s all you need.

Some cooks add vinegar to their crust to limit gluten development and thus produce a more tender crust. But with this method, I don’t find that I need it. I use butter and butter alone because the flavor is so much better than that of shortening. For sweet fruit and other dessert pies, I usually also add a little bit of sugar, but this is up to you.

Rhubarb Pie | How to Make Easy Pie Crust From Scratch

As for technique, I think hand-mixed crusts are the best. I’ve tried making dough in my food processor, but I really believe that making it by hand is easier, both in terms of being able to know when the crust is done and in not having to clean up the equipment. And the result is wonderful: flaky and tender. They key is to keep your ingredients as cold as possible so that the butter doesn’t melt into the flour. When those little solid pieces of butter go into the oven, they melt, creating steam, which in turn creates thin, flaky layers.

It really does just take a little bit of practice to build your confidence. This homemade pie dough has plenty of butter, so you’re unlikely to end up with a tough crust, even if you’re just a beginner. I photographed each step to try to help you along. So follow along. You’ll soon feel like a crust genius!

Note: When I photographed this process, I happened to be making the crust for a savory pie and therefore didn’t add sugar. However the recipe does list the correct amount of sugar and tells you when to add it.

Also, this is a recipe for a double-crust pie. To make a single-crust pie, simply cut the recipe in half and do not divide the resulting dough—just press it into a disk, wrap in plastic wrap, and refrigerate.

How to Make Easy Pie Crust From Scratch 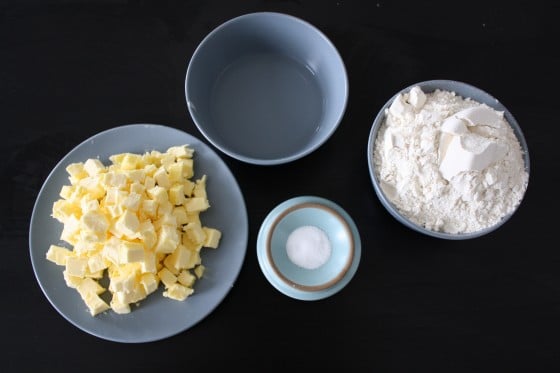 How to Make Easy Pie Crust From Scratch

Step One
In a medium bowl, whisk together flour, sugar (if using), and salt until well combined. 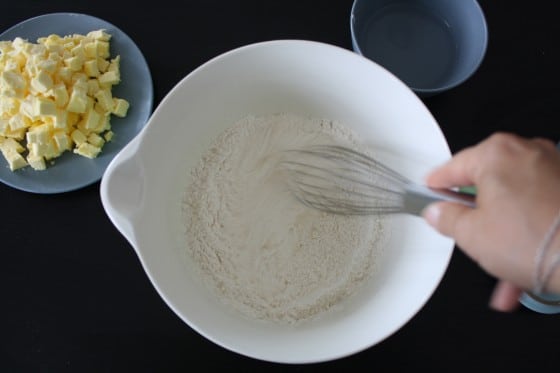 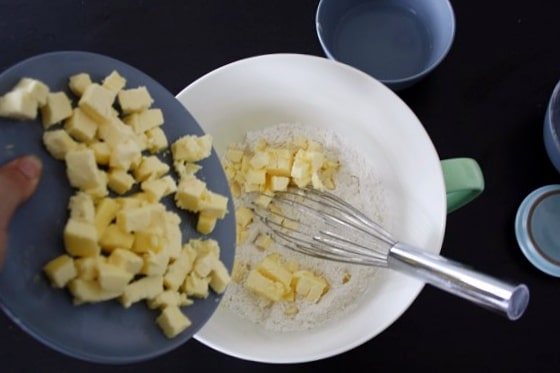 Step Three
Use a pastry cutter, 2 knives, or a fork to break the butter into smaller pieces. This is an optional step, but I always do it because using utensils instead of your fingers keeps the butter cooler. 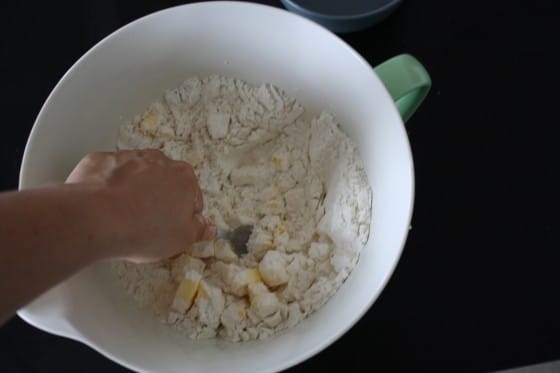 Break down the butter.

Step Four
Once the butter pieces are small, use your fingers to work the butter into the flour mixture: Rub your thumb against your fingertips as if you’re making the universal sign for “money,” smearing the butter as you do. 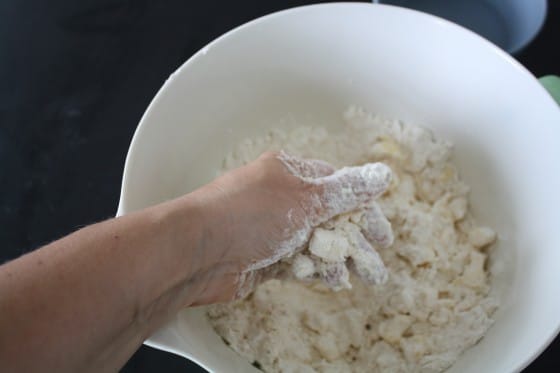 Work the butter in with your fingers. 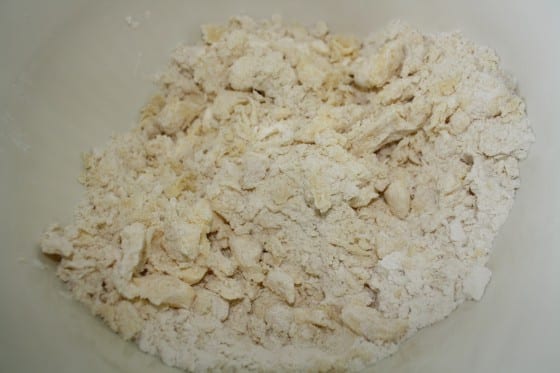 Step Six
Stop when the mixture looks like cornmeal with lumps and bean-sized bits of butter remaining. 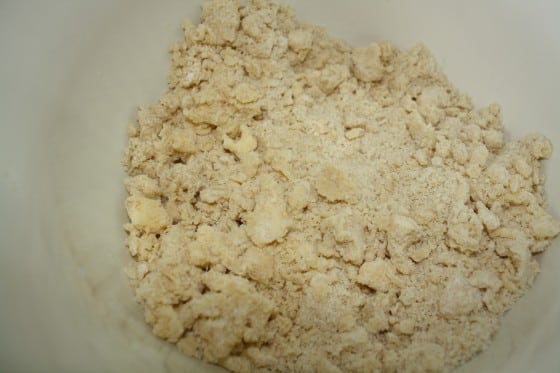 Step Seven
Sprinkle 6 tablespoons ice water on top and stir with a fork until the dough begins to come together. If needed, add more ice water, a tablespoon at a time, but proceed cautiously.

Stir the cold water into the pie dough.

Step Eight
Turn out onto a lightly floured surface and knead three times, or just enough to make a cohesive dough—do not overmix! 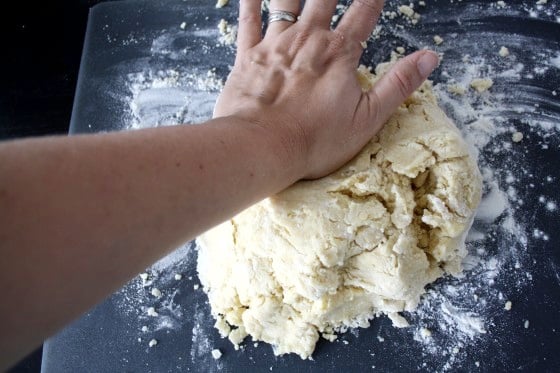 Here’s a close-up look at the crust. See how mottled it is? That’s what you want. 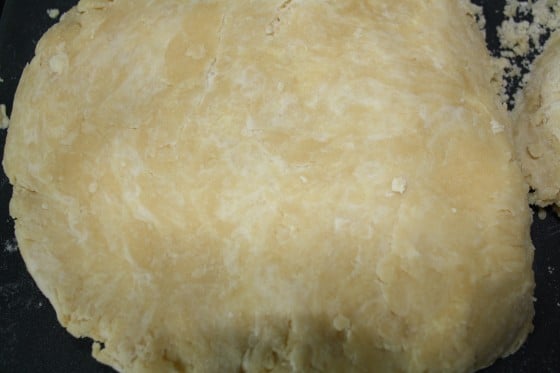 Step Nine
Gather the dough into a ball and divide into two pieces, one slightly larger than the other. The larger piece will be the bottom crust. 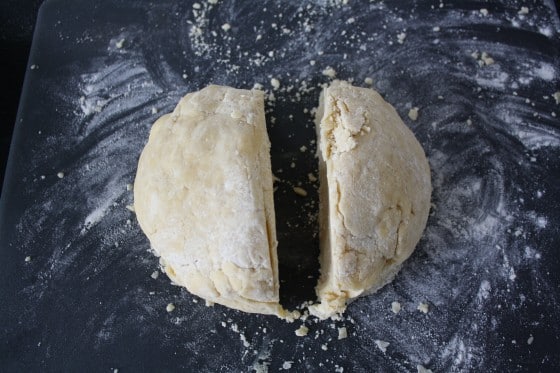 Step Ten
Press each piece into a disk and wrap in plastic wrap. Refrigerate for 30 minutes. 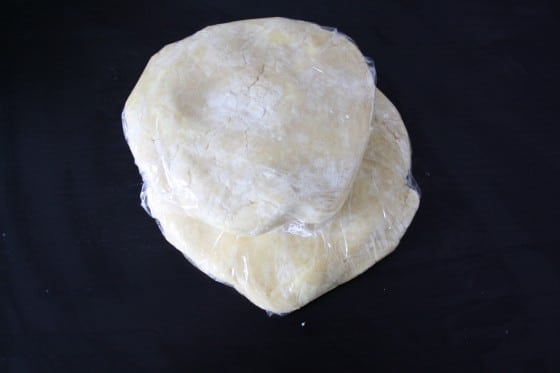 Pie dough wrapped and ready for the refrigerator.

And there you have it! How to make easy pie crust from scratch at home!

Follow our expert step-by-step photos and instructions on How to Roll Out Pie Crust perfectly every time.

The post How to Make Easy Pie Crust From Scratch | Steps in Photos appeared first on New England Today.

Iran suffers more humiliation with killing of nuclear chief. But no one in the region wants war