As a kid growing up in rural New Hampshire, I could gauge winter’s impending end by the arrival of an old farmer friend who tapped our sugar maples. The maple syrup supplies that he set up on our land consisted of miles of gravity-fed tubing and a large stainless steel tank set near the top of our driveway. When I was sure he wasn’t poking around our woods, I would sneak up to the big container, stick a finger into the sap, and give it a sample. The maple taste was faint, but it was there — and I was hooked. 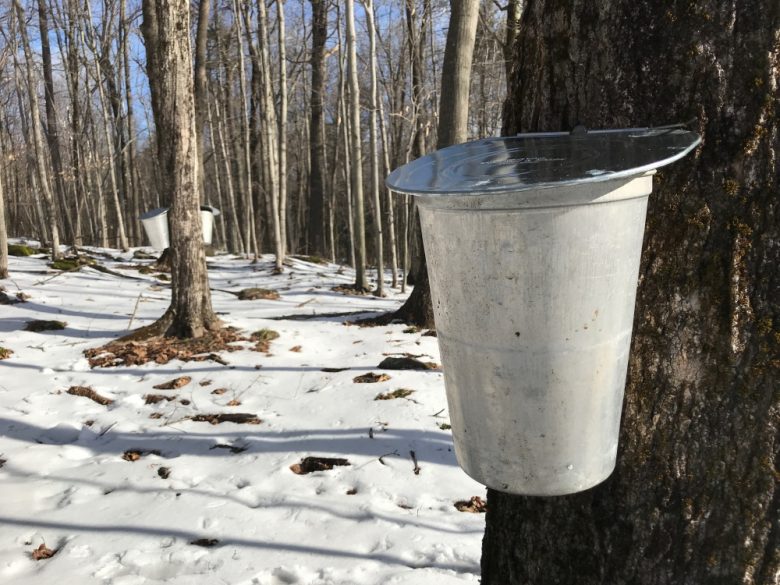 My backyard’s small sugarbush. Every year we put out 15 or so taps.

It took a few decades, but five years ago I finally got around to setting up my own maple operation. “Modest” would be a generous way of describing it. “Tiny” is more accurate. I pored over Backyard Sugarin’, the go-to guide on how to build a shoestring maple-making operation. I came at this with big dreams: Maybe I can sell a few gallons, I thought. Maybe one day I’ll even build my own sugarhouse. You know, give it all up and become a full-time maple syrup maker. Oh, dreams.

The thing is, sugaring has a quick and powerful way of humbling novices. I overboiled an early batch, producing something more akin to candy than syrup. After one long day, I spilled another batch as I attempted to bottle it, and nearly half of what I’d slaved over oozed across my counter. I wanted to curl up in the corner of the kitchen and rock myself to sleep.

But there were some successes, too. I actually did make syrup that first year. I awed my family with the small crop I’d produced and felt sharp pains of agony whenever we, you know, we actually ate it. Can’t we just look at it? I thought. I mean: All. That. Work. No luck. That first year, a few short weeks after I’d made my maple syrup not a trace of it was to be found. So it went the following year. And the year after that.

Over the years my operation has evolved, with a maturing level of methods. My very first batch I tried to cook down on the stove. When that took too long, I turned to the grill and quickly went through a tank only to barely bring my pot of sap to boil. I finally settled on a crude little rig that was made with cinder blocks, disposable cooking pans, and a lot of firewood. 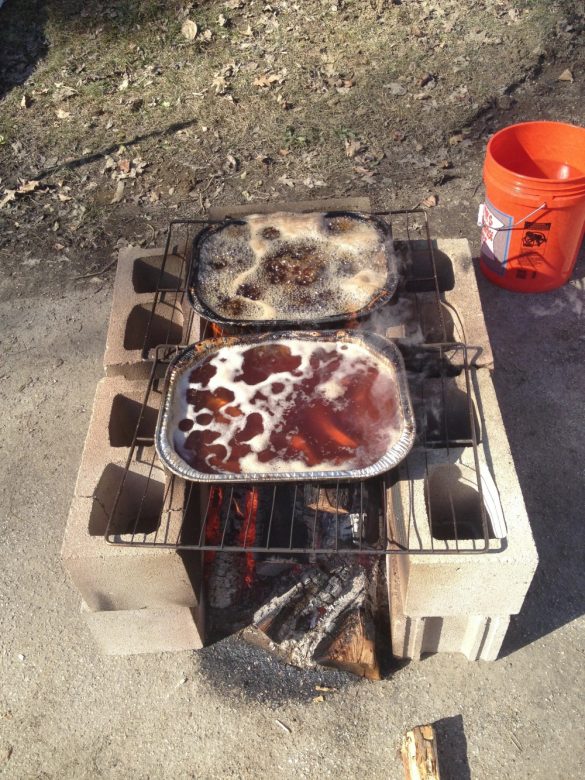 There is something to be said for those gravity-fed tubes.

A few long Saturdays were spent stoking that fire, keeping it hot, and keeping those pans replenished. I’d start at 6, and by 11 at night I was tightening the jars on the modest amount of syrup I’d made. Wanting to up my game a bit, I looked on Craigslist a couple of years ago for maple syrup supplies and found a New Hampshire man making homemade boilers out of retired oil drums. It’s my slickest piece of maple equipment yet. And lightning-fast compared with my older methods. (Which is to say it’s still darn slow.)

Over the years I’ve also picked up some professional maple syrup supplies and essentials. Taps, buckets, and filters, for example. My two sources for supplies are Bascom Maple Farms in Alstead, New Hampshire, and The Maple Guys in Wilton, New Hampshire. Eventually, I hope to get a hydrometer so that I can more accurately measure when the syrup is ready. Currently, I sort of eyeball it. When I know the sap is close, I stick a flat edge into the concoction and then pull it out. If the liquid drops off the edge, it still needs to boil. If it sheets off, then it’s ready.

That method came to me courtesy of Burr Morse, whom I interviewed several years ago. Maple runs in Burr’s veins. His family has sugared the same Vermont land for nearly 200 years, and his early springs have been spent around a boiler since he was a toddler. He offered up some fantastic advice on maple syrup supplies and how to sugar inexpensively. But he warned me: You got to know how to kill time.

Keep a good book nearby, he said. Learn to whittle; turn on the radio. “My dad would start smoking, and I’d find gum wrappers all over the sugarhouse,” Morse said. “One time I accused him of being bored. He didn’t want to admit it. Finally, he just said, ‘Well, it’s a quality boredom.’”

And I suppose it is. Yet in this age of never-ending to-do lists, it’s kind of refreshing. Maple syrup making is less about actually making the syrup, I’ve discovered, than it is an excuse to do a whole lot of nothing.

I do keep some good books nearby. One of my favorites is an edition I plucked from the Yankee shelves just outside my office. It’s a 1953 original review copy of Helen and Scott Nearing’s The Maple Sugar Book, a dense but delightful read about the history and art of making maple syrup. I can’t pretend to have read the entire thing, but every year, in between the fire stoking and sap replenishing, I pick away at it. It’s a great mood-setter. 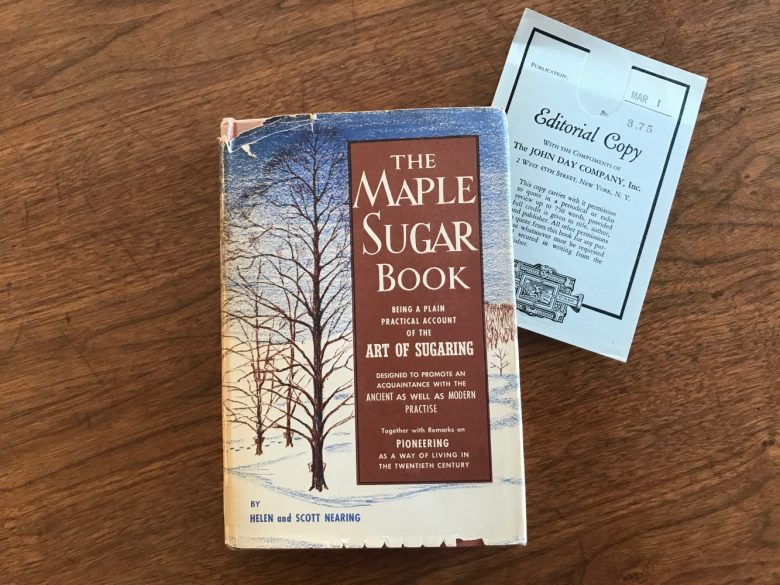 Over two weekends this year, my 7-year-old son and I boiled sap. In all, we made just under a gallon of syrup, our best spring yet. We currently have a nice row of filled half-pint jars lining a pantry shelf. For now. It’s going fast. Already. Darn.

Below is a selection of photos of our backyard sugaring operation. 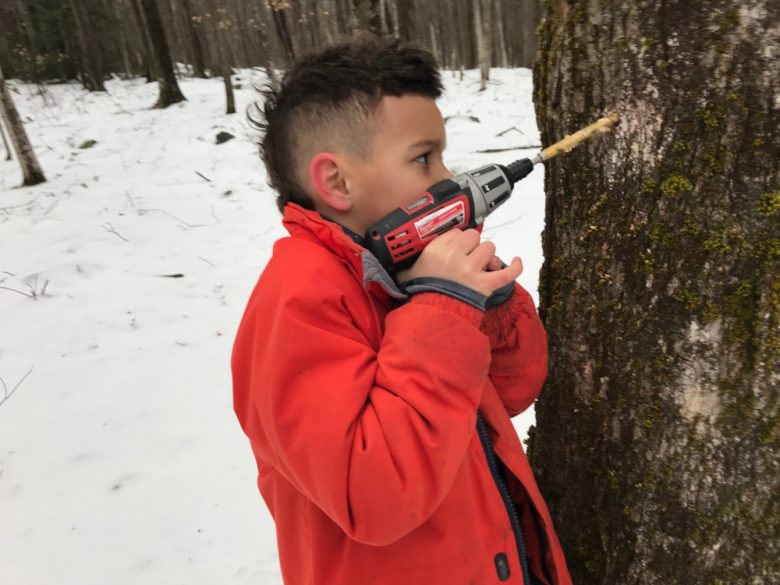 The work began in late February, when my son and I installed taps in our backyard maple trees. We used a 7/16″ bit to drill the holes, which are made at a slight angle. (On a side note, I require all my employees to sport mohawks.) 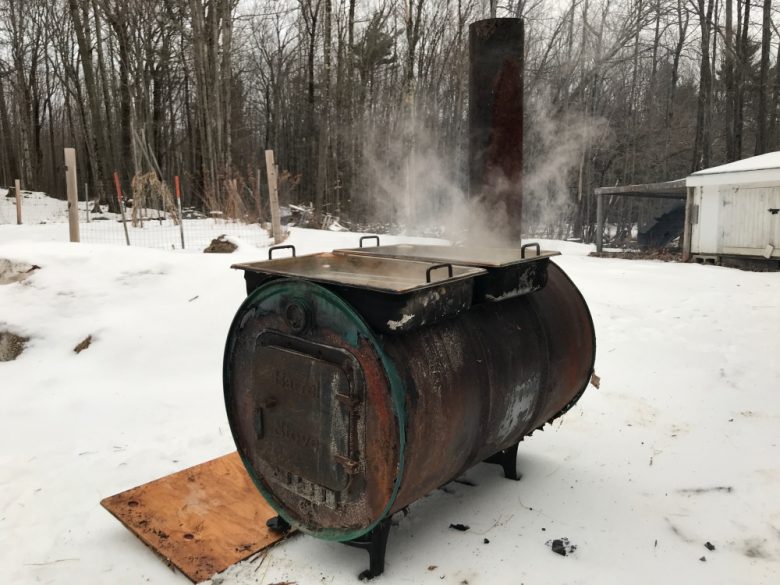 This Craigslist find is a converted a oil drum with a set of pans, door, and stovepipe. 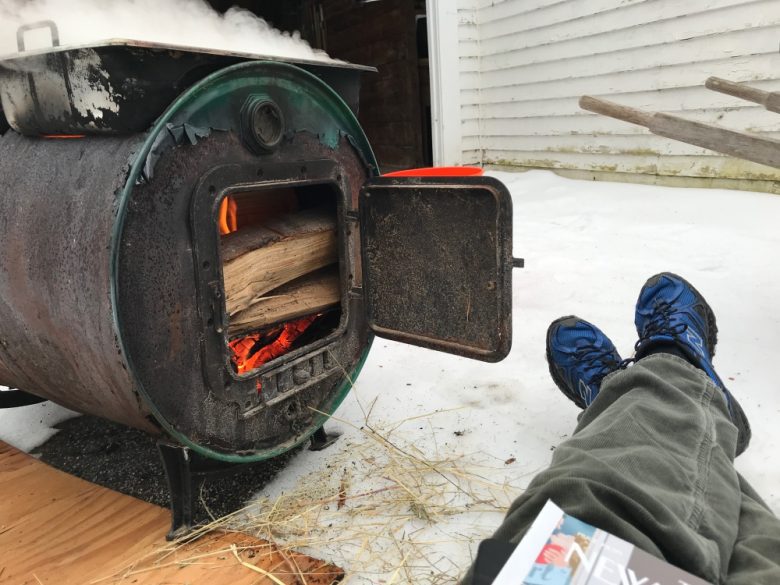 Making syrup means making use of the time in between the fire stoking and sap replenishing. There’s a lot of this. 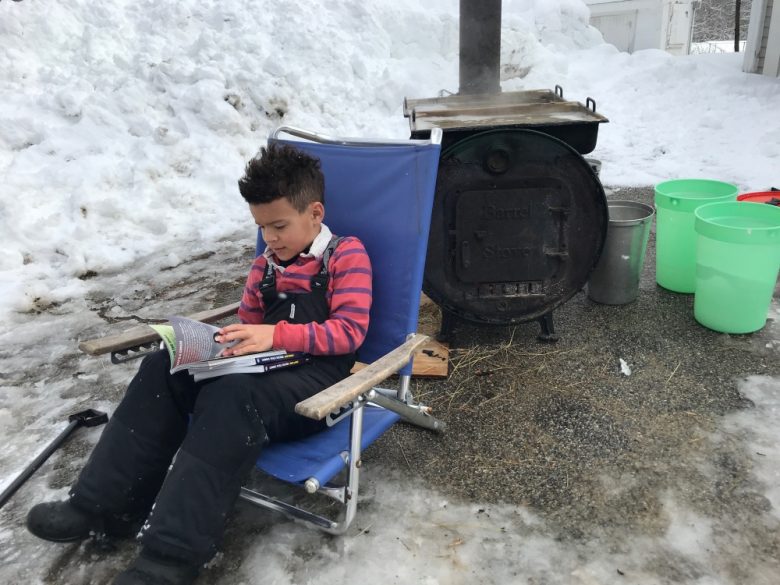 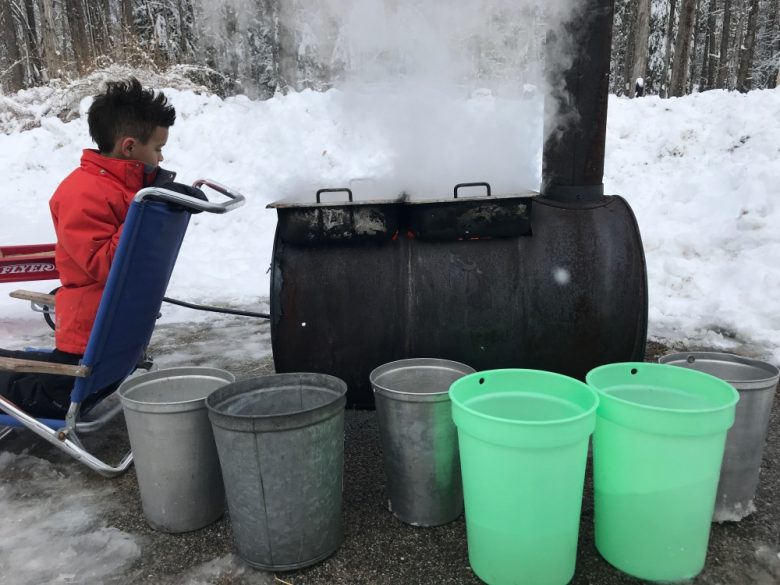 My assistant keeps a careful eye on the operation. 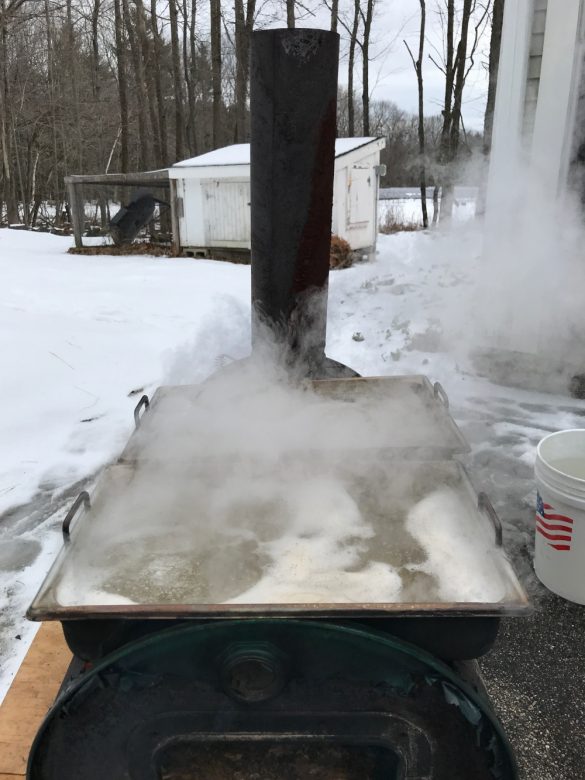 The boil is on. 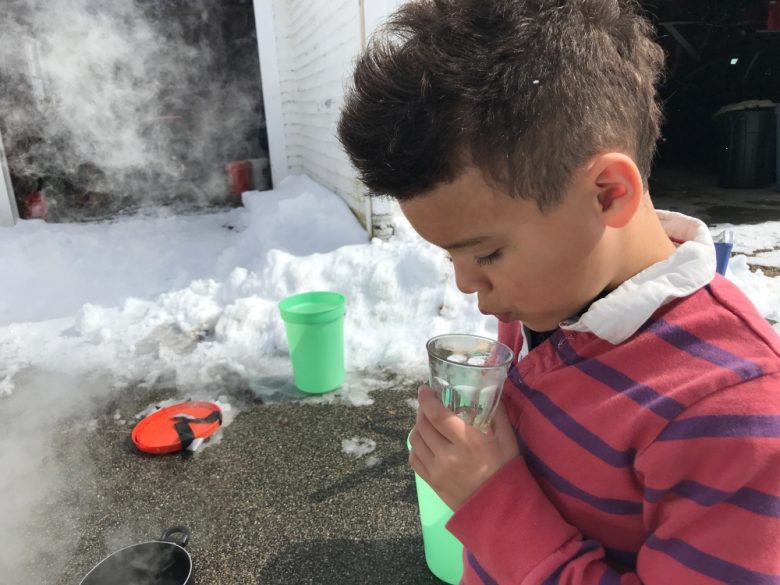 Is it ready? My official taste tester wants to find out. 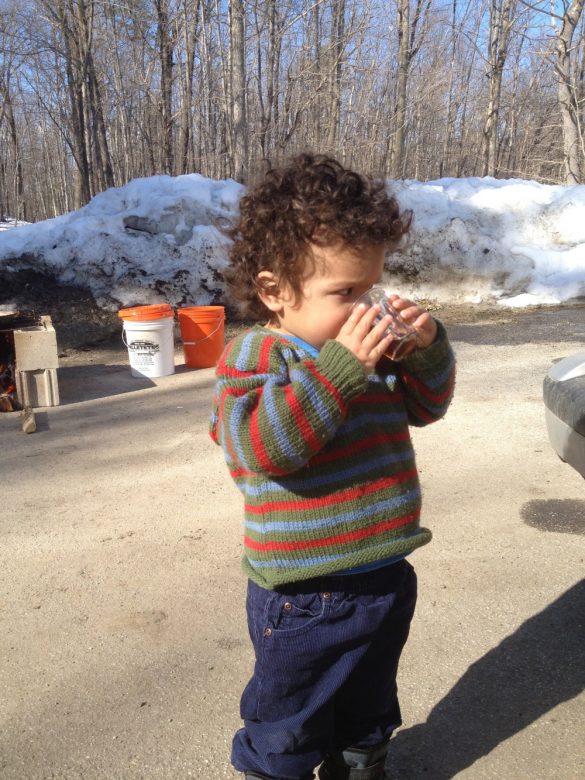 My tester has years on the job. Here he is a few years ago (before the mohawk policy was instituted). 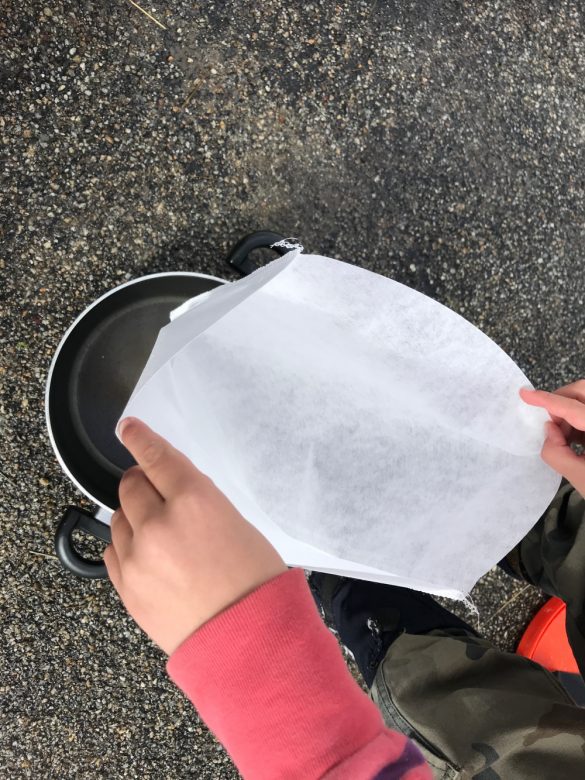 Just before I bring the sap mixture inside for a final boil, I pour it through a filter to eliminate debris and other gunk that can fall into the fan during the boil. It’s also a good idea to filter again when it’s still-hot syrup, to strip out what’s commonly called “sugar sand.” These gritty bits are just the natural minerals that exist in the syrup. They’re safe to eat but can give the syrup an unusual texture. 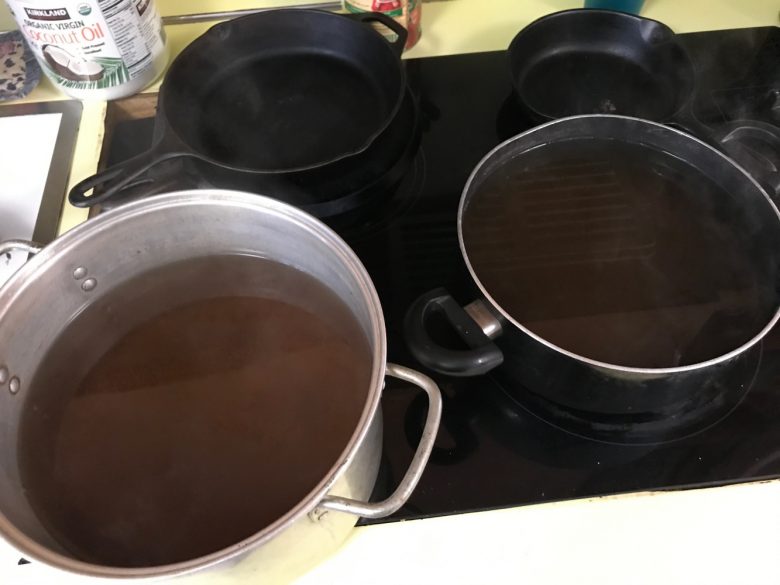 When the sap boils down to a couple of gallons, I bring it inside for a final cook on the kitchen stove.

An old-time sugarer taught me that a little butter calms the boil down when it gets especially frothy. 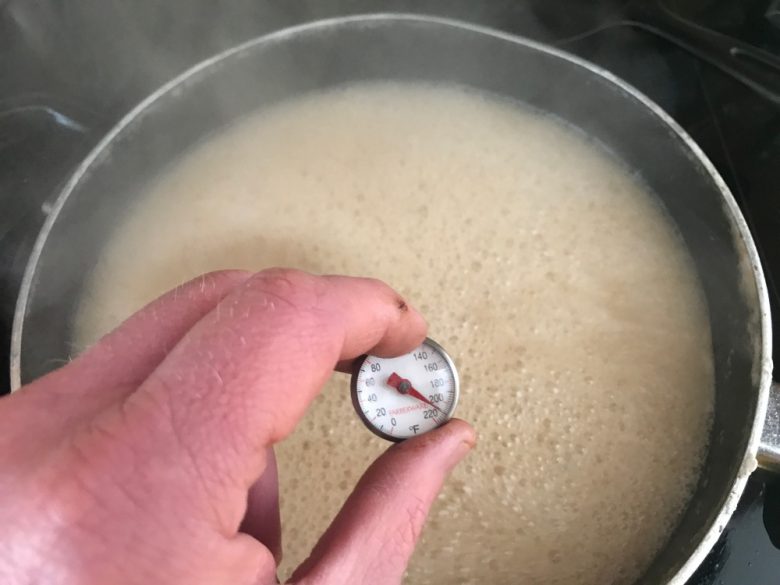 The goal is to get the liquid to seven degrees above boiling. At this point we’re almost there. 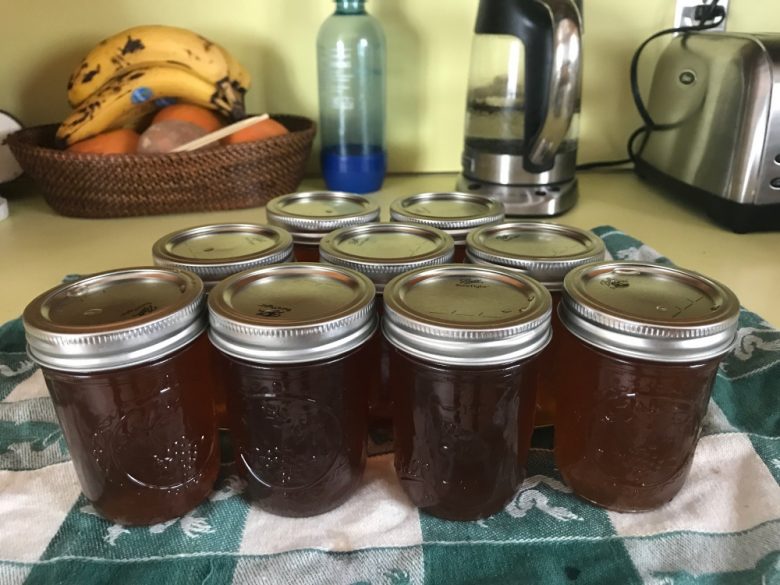 The finished product. We made nearly half a gallon from our first boil, and about half as much the following weekend.

Do you make your own maple syrup? What maple syrup supplies do you use? Let us know!

The post How to Make Maple Syrup in Your Own Backyard appeared first on New England Today.

Ode to the Baked Bean Sandwich