You’ve probably had the dream. You’re staying at a postcard-perfect New England Bed & Breakfast and the thoughts start percolating. This is nice. You have a nice home, you welcome guests to it, you make them food. Running one of these could be a beautiful way to make a living.

And maybe it would. But there’s another side to it. A sometimes grueling one that takes those Bob Newhart dreams and slaps them around with the reality of long days, low profits, and little relief. That’s why there’s a joke in the B&B world that goes like this: Walk into any inn and ask the owners whether their business is for sale, and you’ll be invited to talk numbers. 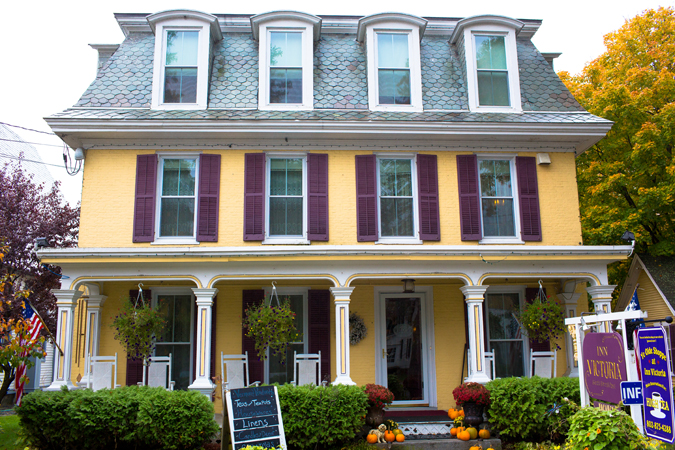 The front of the Inn Victoria in downtown Chester, Vermont.

Dan and Penny Cote are among the lucky ones. For the last seven years they’ve operated the Inn Victoria in Chester, Vermont, an 8-room B&B in the heart of the Okemo Valley. We profiled the Cotes in 2013 to show the challenges (18 hour days) and rewards (new friends for life!) of what it was like to live the life of an innkeeper. We recently caught up with couple again to learn more about what it takes to run a B&B. What they have to say may surprise you.

Get Handy or Go Broke

Just because you have a plumber or electrician on speed dial, doesn’t mean you should call them. “If I had to pay a person to come out here every time I needed them, I’d go broke,” says Dan. Knowing how to fix stuff, or make do with certain fixes, is essential. Adds Penny: “Changing a light bulb might actually be a three- or four-day job because it might not just be a burned out a bulb. It could be the wire running down behind the wall that’s bad.” If it is, you may need to know how to get at it and address the issue on your own dime.

It’s going to happen. Guests are going to be difficult or at the very least, finicky. Don’t ever lose your smile, says Penny. “You have to be the good host because your goal is to make your guests happy,” she says. “But sometimes there’s nothing you can do to make them happy. Most of your guests, 99.9 percent of them, are great. But you will get that .1 percent where you’ll try to accommodate them and nothing helps. You’re just like, why did you go on vacation?” Along those same lines, Penny says that as an innkeeper you need to be a versatile cook. “People are gluten free, dairy free, egg free—I joke that I’ve learned how to cook everything except air,” she says.

It can be all about the details. How the bed is made, whether flowers are real, and did you welcome guests with enough gusto when they first walked through the front door? Those are the kinds of things guests remember, says Dan. They pass it on to their friends, or insert it into their online reviews for all the world to read. 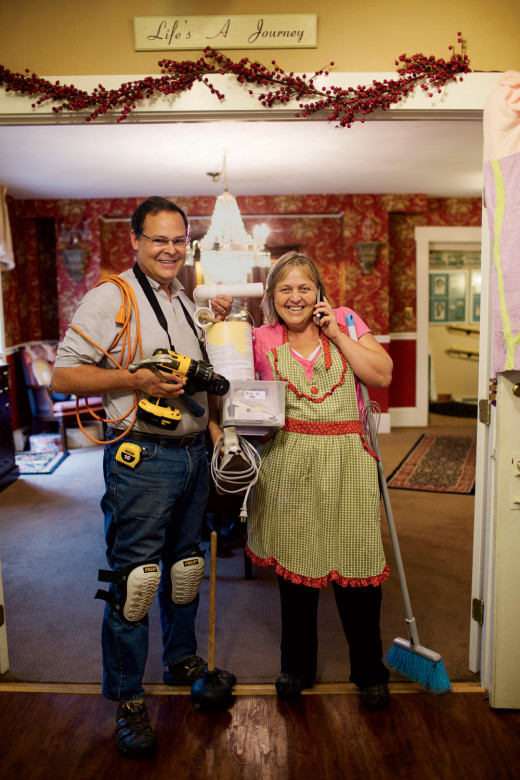 As owners of the Inn Victoria in Chester, Vermont, Dan and Penny Cote do it all.

Potential guests call or even drop in at any time of night. “It’s pouring rain and we’ve gotten a knock on the door at two in the morning from a couple who are in the middle of a camping trip and they suddenly need a place to stay,” says Penny. Or there’s a call from a frantic mother who needs a place for her daughter to stay because her car just broke down. “You don’t want to pick up the phone but you know if you don’t they’ll take their business elsewhere,” she says. Or, sometimes a call comes late at night from someone who wants to talk about having their wedding at the inn. “That’s happened, too,” says Penny.

Learn to Live with (Your Own) Mess

The inn should look pristine, but don’t stress if your living quarters don’t. Why? Time to keep up the residence simply isn’t there. Penny and Dan make their home in a small apartment in the back of their B&B. It’s a crowded space of papers and laundry that needs to be put away. “You end up putting your money and energy into the part of the house that makes money for you,” says Penny. “You have to let go of the things that aren’t important. It’s like living in a tiny house. You have to give up on the material things you treasure.”

Have you ever wondered how to run a B&B? Is it something you’d ever consider doing? Let us know in the comments!

The post How to Run a B&B | 5 Innkeeper Secrets appeared first on New England Today.

How Karen became a meme, and what real-life Karens think about it

Rwanda reports its first death from the new coronavirus