Ideology vs the triple lock

3 Edits That Will Help Your Resume Get Noticed

How to Make the Most Out of Options Trading

Hiring During The Pandemic? Here Are A List Of Questions To Ask The Applicant During The Skype Interview

Why affiliate marketing is still an important outreach tool for brands

Worried About Your Financial Rut? 6 Useful Tips You Must Consider

Debt Consolidation: How It Can Free Up Your Cash Flow and Your Life

The Forgotten Greatness of Rothbard’s Preface to Theory and History

How to Find Trending Products to Sell Online

The Rise of Grocery E-commerce and Returns

Centrists want to scrap the pensions triple lock. Matthew Parris says it is now "impossible to defend" and that the old should pay the costs of the lockdown. Also in the Times, Oliver Kamm writes:

People of working age in their 30s, 40s and even 50s are disadvantaged by the way our economy favours pensioners. The cause of intergenerational equity demands some redress for this imbalance.

And Polly Toynbee says it is "rational and inevitable" that the triple lock should go.

I disagree. As I've said before, the triple lock is a thoroughly good idea.

For one thing, its main beneficiaries are NOT today's pensioners but today's young people. An 80-something will get only a few years of real-terms pension increases. But younger people can look forward to decades of such rises. Because your wealth is the present value of future incomes, this benefits them now. Scrapping the triple lock will therefore impoverish young people more than old ones.

If we do this, young people will have to make more provision for their own retirement. But this is both difficult and expensive. Difficult, because we face radical uncertainty about future investment returns, and so we don't know how much to save – and as Janan Ganesh wisely points out, it is as dangerous to save too much as too little. And expensive, because fund managers charge a fortune for the privilege of mismanaging our money. It's more efficient for the state to provide pensions. Not only are the administration costs smaller, but – more importantly – the state is better at bearing risk than the individual.

All this should be obvious. Why, then, do so many people not get it?

I'll concede that there is an issue here: if, as the OBR predicts, average earnings will rise 18% next year as hours return to normal, a rigid adherence to the triple lock would require a huge increase in pensions. But this only tells us that blindly following simple rules can sometimes be silly. It doesn't undermine the principle of the triple lock.

Instead, hostility to it is, I suspect, founded upon some ideological biases: when intelligent people are obviously wrong, I look to ideology*.

One bias here is what I've called the cost bias – the tendency to describe as costs what are in fact only transfers. Oliver says the triple lock "will add £15bn a year to the cost of the state pension by 2060-61". But it's not just a cost, but a benefit. And who'll be getting it? People who are today only around 30 years old.

In some quarters, this bias is magnified by a childish error – the tendency to regard the government's finances as akin to a household's. We don't, however, need MMT to see this is nonsense in this case.

For one thing, the size of this transfer will not be especially large. The OBR estimates that by then state pensions will be equivalent to just under 8% of GDP. That's less than many European countries devote to pensions now.

And for another, people will have to get pensions somehow. Any pension, state or private, must be paid for by working people – if not by taxes to pay the state pension, then by dividends to pay private pensions**. If future workers cannot afford to pay taxes, they'll be unable to pay dividends either. If you're worried by the burden future pensions will impose upon future workers. the solution is to raise productivity, not to scrap the triple lock.

Thirdly, there's hostility to the principle of universal benefits. Polly says the triple lock is "an extravagant way to steer more towards the better off." But if pensioners' total incomes are too high, the solution is income tax rather than use means-testing with its large deadweight costs. 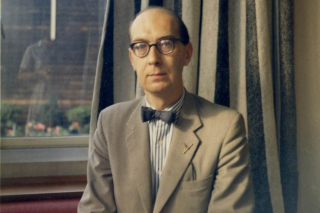 I fear, though, there there might be another error at work – then tendency to see people merely as members of demographic groups rather than as individuals. Thinking in terms of "young" and "old" pits one generation against another. But this is silly. Young people are individuals with hopes and expectations. The state pension is one of these hopes. In raising it in real terms over time, it thus benefits the young. And because people under-estimate the power of compounding in so many contexts, they under-estimate the benefit to the young of real-terms pension increases – just as they under-estimate just how expensive pension fund charges compound to become.

So who, then, would benefit from scrapping the triple lock? The answer is pension fund managers. who'll get higher fees as young people have to make more private provision for their old age. What we have here, then, is an example of how centrists – maybe inadvertently at least in this case – help to sustain extractive capitalism.

Equally inadvertently, in doing so they are in fact punishing young people. In this sense, Larkin was right: "They fuck you up, your mum and dad. They may not mean to, but they do."

* I'm not attributing all these biases to all of Kamm, Toynbee and Parris – merely noting that they are common ones.

** There is a caveat here. Private pension providers can invest overseas, and so extract dividends from foreign workers. In principle, though, the state can do this too with a sovereign wealth fund.

The post Ideology vs the triple lock appeared first on Market World.

15 IRA Rules You Should Know

How to Sell on Walmart Marketplace: Your Questions Answered