Located on the stretch of Route 1 between Portland, Maine, and Acadia National Park, Moody’s Diner is a long-standing, hugely popular roadside spot that has something for everyone — especially pie! 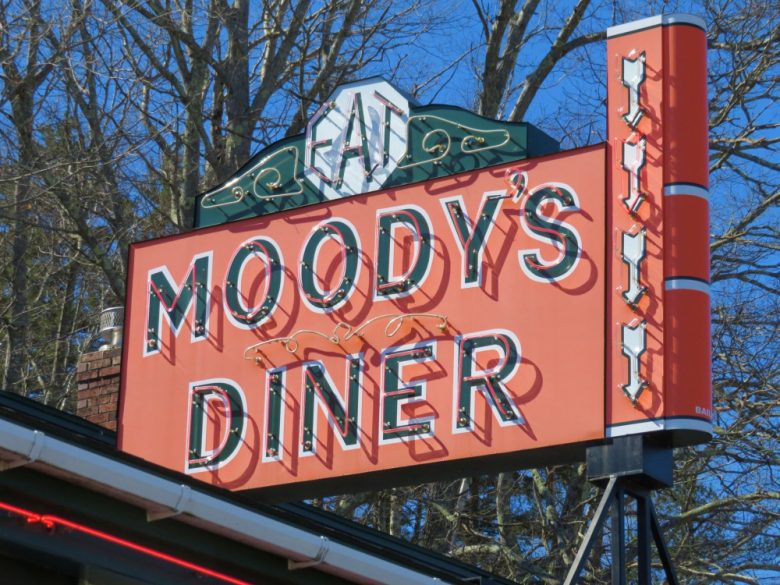 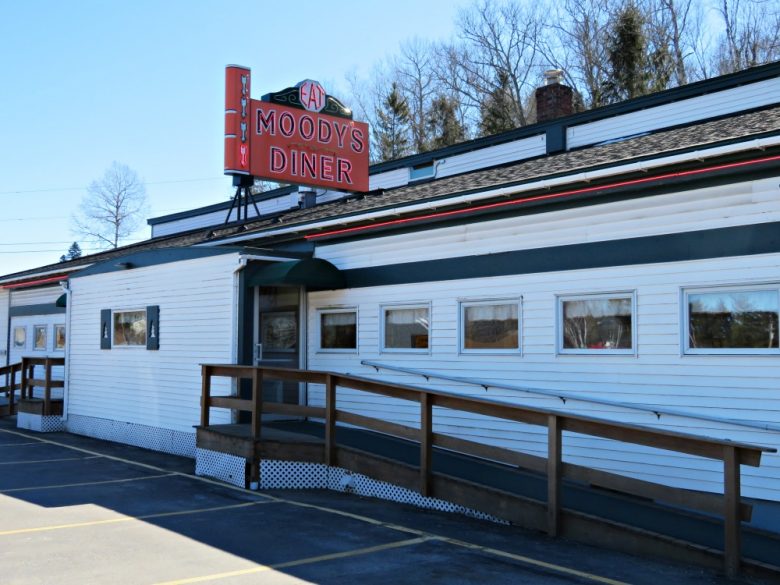 For hungry travelers, the diner is a welcome sight when driving up Route 1.

In Praise of Moody’s Diner

Founded by Percy Moody in the 1920s, Moody’s Diner started as a few small cabins on a hilltop in Waldoboro, Maine. Percy soon added a dining room and eventually a roadside lunch wagon for hungry locals and travelers. The lunch wagon morphed into a roadside diner, which has grown over the years into the massive white clapboard building you see today. 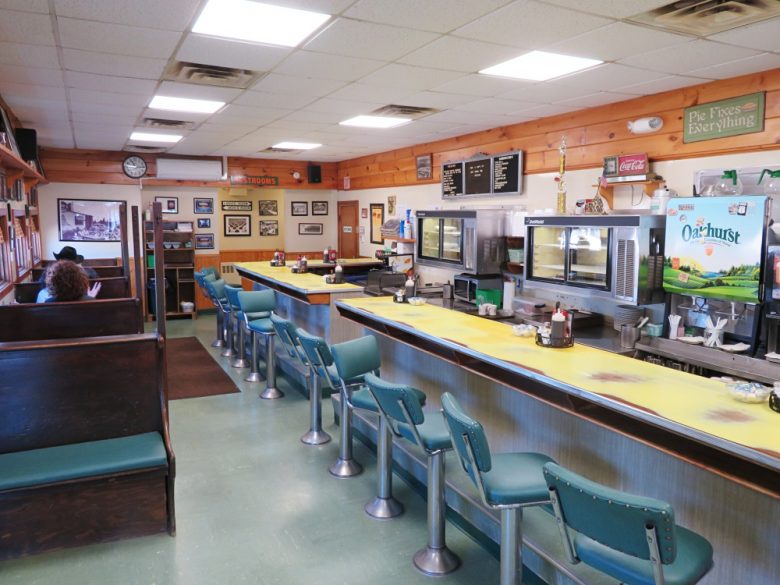 The counter area at Moody’s Diner.

Step inside and behold the cozy counter to the left, with its dozen-plus stools and well-worn Formica surface. Grab a seat and gaze upon the display cases of pies and other desserts behind the counter while sizing up the menu. 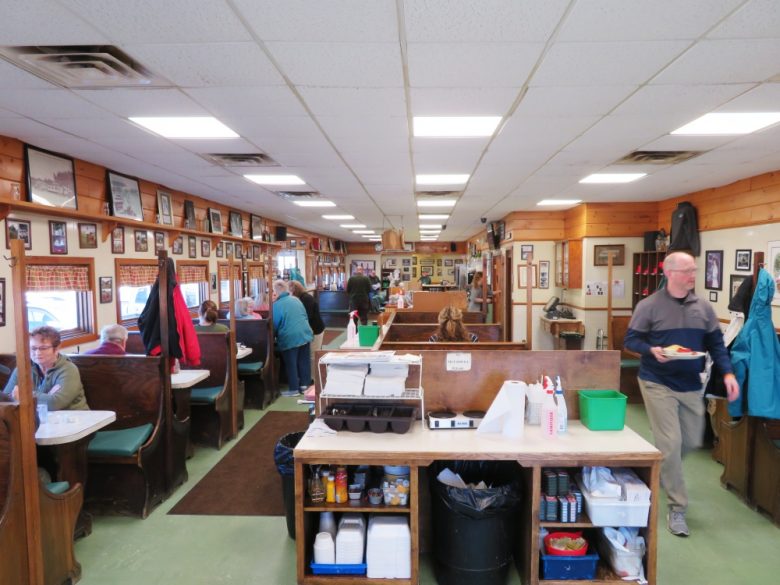 Counter seating not for you? Then take a right upon entering and step into the 80-seat dining room, which has dozens of tables and booths and walls covered with Moody’s memorabilia. 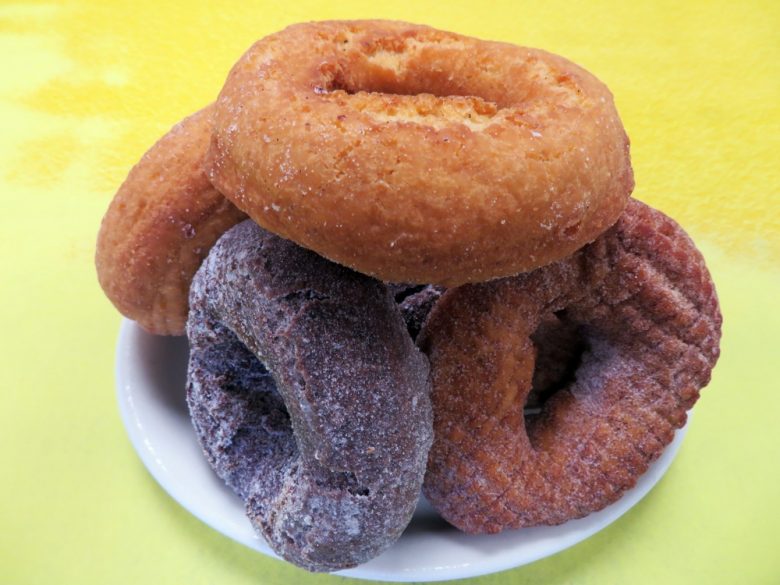 A plate of Moody’s homemade doughnuts.

A number of Moody family recipes form the basis of the good eats to be had here. Start with the homemade doughnuts, made fresh daily in the diner’s cavernous kitchen. The doughnuts are cooked in lard — a throwback to Bertha Moody’s cooking methods from the 1930s. The results are light and fluffy and come in plain, cinnamon, and chocolate. Enjoy one or two for breakfast, or grab half a dozen at the counter for the road. 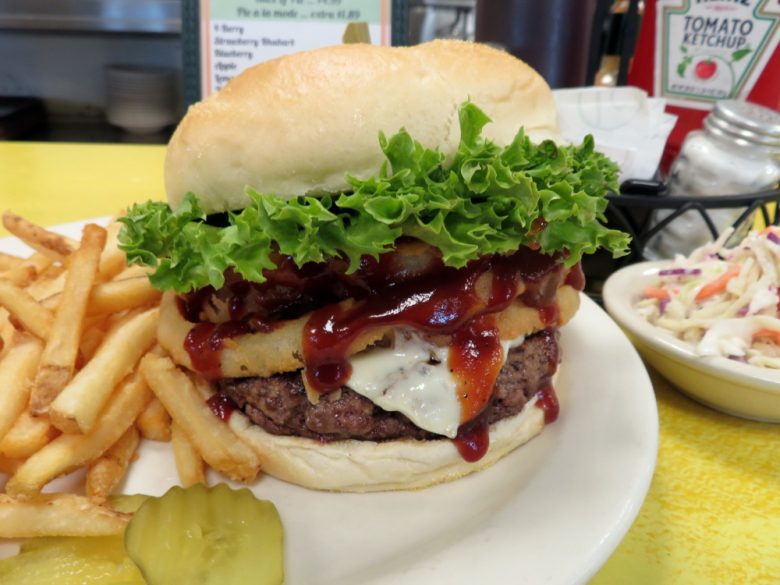 The “By Thunder” burger.

Hot sandwiches are all the rage here and have been for years. At the top of the list are the perennial favorites, such as the hot turkey sandwich smothered in gravy with mashed potatoes and green beans on the side. The current chart-topping burger is the “By Thunder”: half a pound of beef topped with barbecue sauce, onion rings, and American cheese. And from the griddle, there’s the famous Moody’s Rueben, made with Morse’s sauerkraut from Waldoboro and served with sweet potato fries. 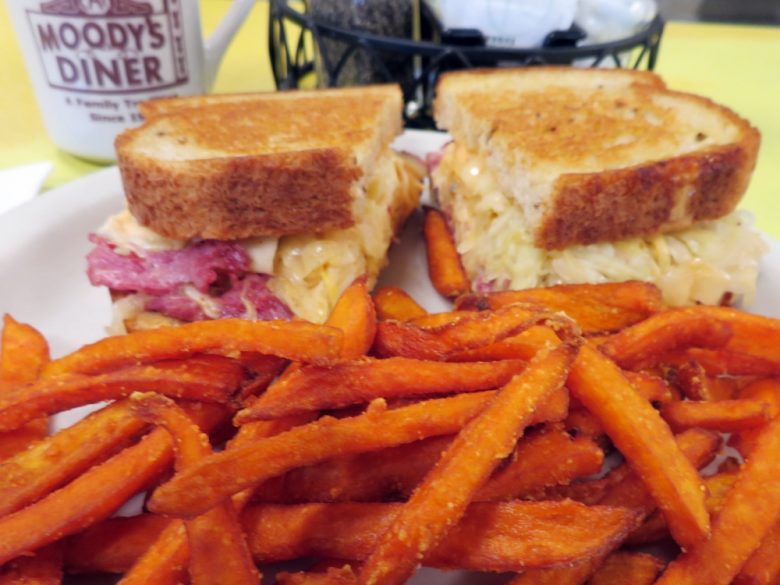 All great diners offer daily specials, and Moody’s is no exception. Try the Yankee pot roast or New England boiled dinner, if you happen to be there on the days they’re served. 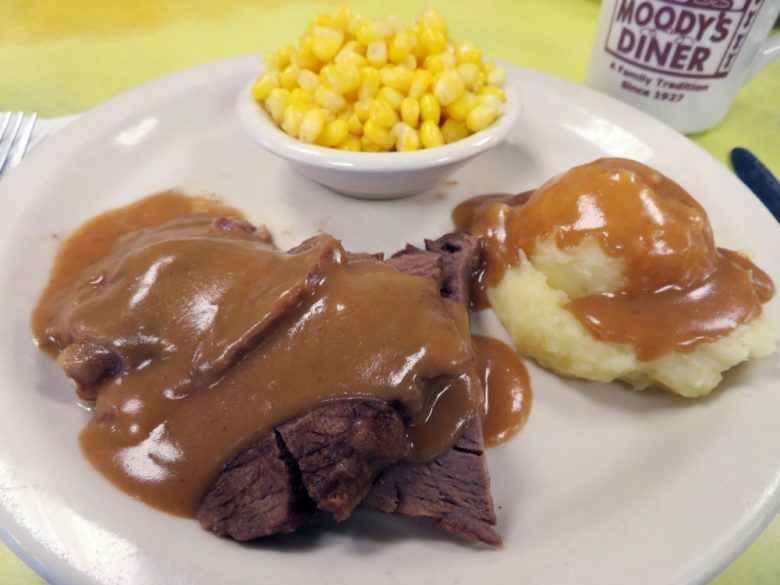 And the mac and cheese has warmed many a belly on cold winter days when it’s served up as a special with stewed tomatoes and a grilled frankfurter on the side. 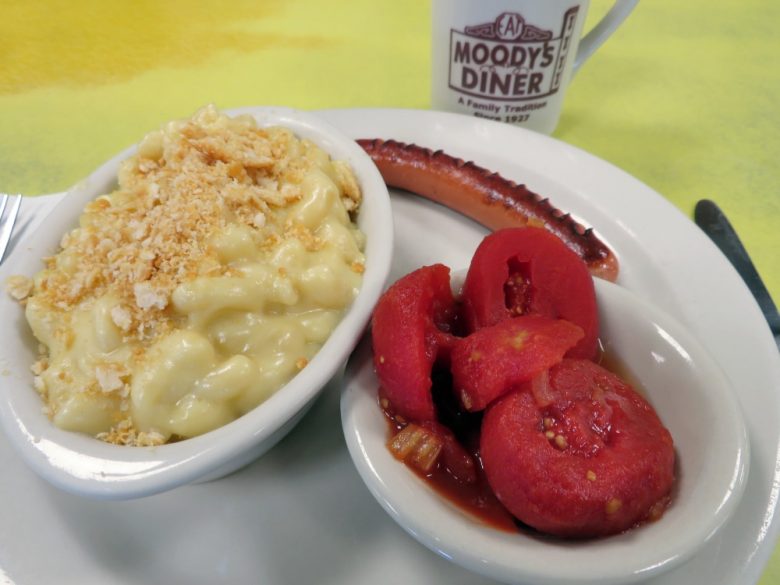 The mac and cheese platter.

Be sure to save room for pie. This is what Moody’s is best known for. There are 10 or so types of pie available on any given day. All are baked fresh, using Bertha Moody’s lard-laden crust — oh so sinful, yet oh so good. 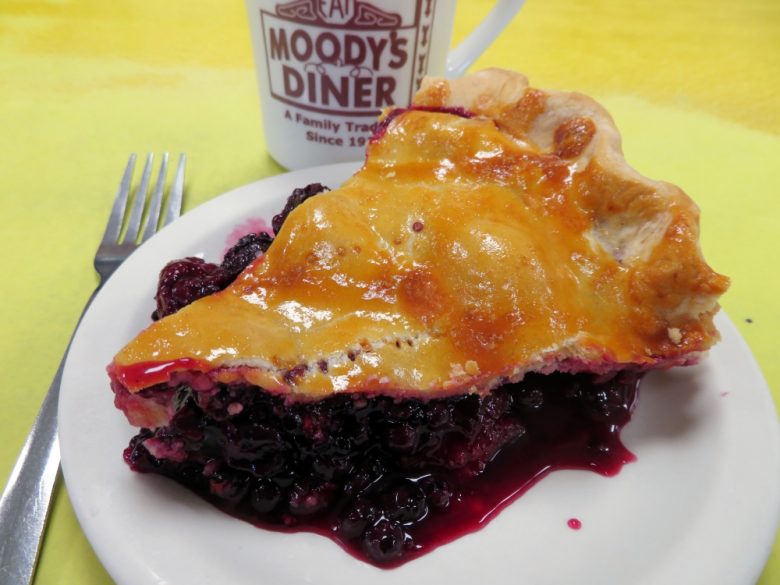 Four-berry pie is the current favorite among Moody’s customers. Packed with blueberries, strawberries, blackberries, and raspberries, it’s not to be missed. Other tempting pies include strawberry-rhubarb, blueberry, and coconut cream. 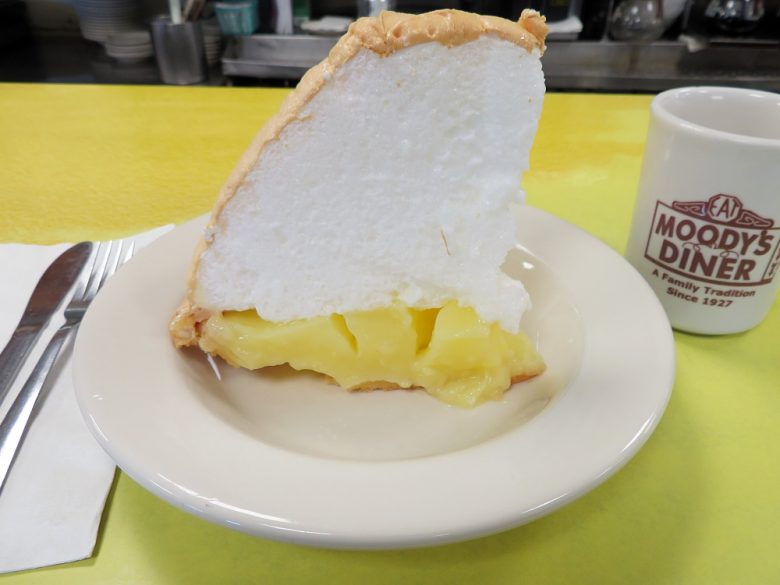 For the truly adventurous, there’s the lemon meringue pie. Rising from your plate like El Capitan, this monumental slice is a feast for the eyes as well as the palate. The meringue melts in your mouth and quickly assuages fears of leaving any pie behind. 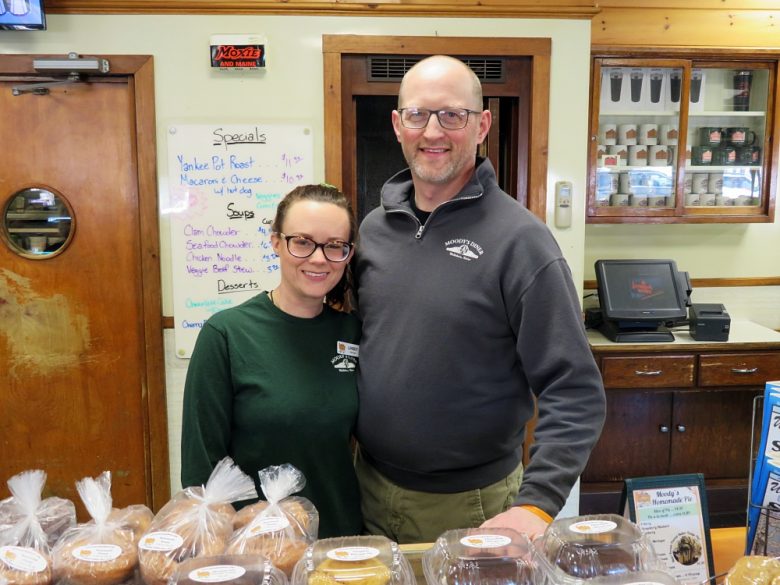 Dan Beck is a third-generation Moody family member and current general manager of Moody’s. He’s assisted by his niece Linsey Moody, from the fourth generation, and other family members as well as dozens of dedicated staff. A fifth-generation family member recently donned a Moody’s apron, too, so the legacy appears to have a bright future. 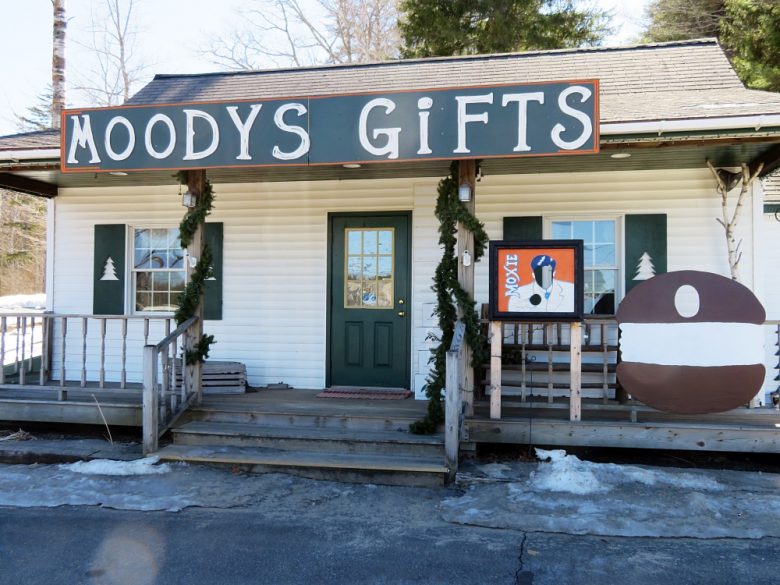 Moody’s also has a gift shop in the back of its parking lot. It’s open seasonally and sells all sorts of Maine memorabilia. And if you’re really enjoying the food and atmosphere, you may want to rent one of the seasonally available cabins on the nearby hill where the decades-old Moody’s enterprise got its start.

Do you have a favorite pie at Moody’s Diner? Let us know!

The post In Praise of Moody’s Diner in Waldoboro, Maine appeared first on New England Today.