Is there a difference between dressing and stuffing? And which is best? With all precincts reporting, it’s “stuffing” over “dressing,” bread over potatoes, apples over chestnuts, and turkey over all comers.

The perfect Thanksgiving turkey is a bird of modest size, perhaps 15 pounds. Its skin is a rich mahogany brown, shiny with numerous bastings. It is plump, so full of stuffing that it’s almost round, and it is bracketed fore and aft with large, bulbous protrusions almost big enough to be junior turkeys. They are, of course, the extra skin, packed to bursting with extra stuffing. All right-thinking people know that stuffing is the whole reason to roast a turkey in the first place- or do they think it’s the dressing? And is there a difference between dressing and stuffing? Old cookbooks often use the term dress to mean prepare, and I’ve heard it said that stuffing goes inside and dressing doesn’t. Are these regional terms? Do we stuff in the North and dress down South? Loaded questions.

I tried looking it up. In Theodora Fitzgibbon’s massive The Food of the Western World, stuffing is “The name given in England to combinations of a variety of foods which are inserted into meats, poultry, fish, eggs, or vegetables. In the United States, stuffing is also called dressing . . .” Onward. My now somewhat elderly (1961) edition of Larousse Gastronomique, the bible of classic, albeit mostly French, cooking, has no listing for either stuffing or dressing. The material in question is listed under forcemeats — only fitting, as the old-fashioned English word forcemeat comes from the French verb farcir, which means “to stuff.” There are 30 recipes, not counting the ones involving fish. The bread-based one we think of as traditional is called “sage and onion stuffing” and is attributed to “English cookery.” 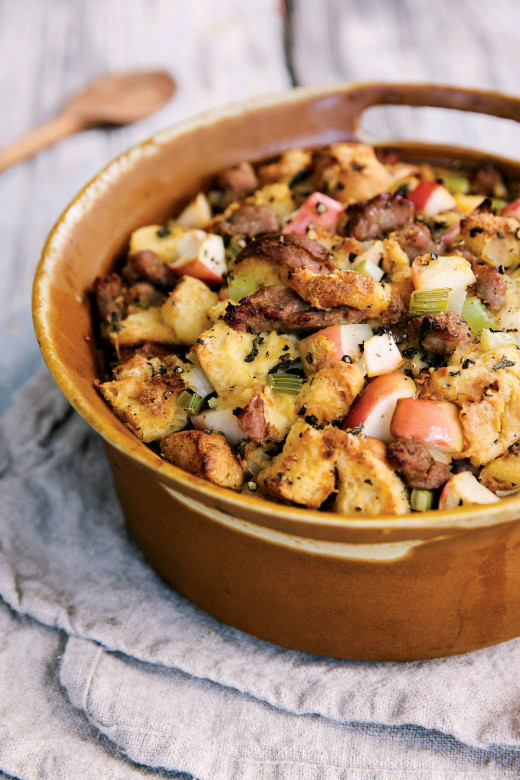 Potato Bread Dressing with Apples, Sausage, and Sage (recipe below)

Is this progress? The Oxford English Dictionary doesn’t offer a recipe but does give 1538 as the written debut of the word: “stuffynge, or that wherewith any foule is crammed …. ”

“Dressing,” says this august source, is “the seasoning substance used in cooking; stuffing; the sauce, etc., used in preparing a dish.” First use is given as 1504.

Home to the United States, where there’s nothing in H. L. Mencken’s compendium of American lingo. How about regional cookbooks? Housekeeping in Old Virginia, a collection of Southern favorites published in 1879, gives turkey-interior recipes from four different contributors, all dressing users, while The New England Cookbook (1905), compiled from the works of several noted authors, says stuffing, as do Fannie Farmer, The New England Cookbook (1954) by Eleanor Early, and Imogene Wolcott’s 1963 Yankee Cookbook. But Mrs. Hill’s Southern Practical Cookery and Receipt Book (1872) says stuffing, too — and warns that “it should never be crammed.” I will spare you the news from out west. Suffice it to say, the problem is exemplified by The Columbian Cookbook (Philadelphia, 1895), which has a roast turkey dressed with oysters but also a whole chapter devoted to forcemeats and stuffings with which you are instructed to fill the bird.

When in doubt, conduct a poll. We put a small notice in last November’s issue and a couple of hundred of you wrote to fill us in on what you make and what you call it. Results: It was stuffing by a three to one margin, from Montana to Massachusetts. No discernible regional bias at all. There are dressing fans in Florida, Ontario, Iowa, and West Virginia, also Connecticut, Rhode Island, Massachusetts, California, and Vermont. And do the two terms denote different foods? Not at all. The same ingredients appeared with stunning regularity no matter what the finished product was called or whence the writer hailed. The only noteworthy tendencies that emerged Were a fondness for adding apples in Vermont and New Hampshire and a disinclination among most New Englanders to include nutmeats. Chestnuts, pecans, walnuts, hickory, and butternuts did appear, but usually in recipes from New York State and points south and west.

Several of you sent us the popcorn joke: The ingredient list includes raw popcorn and the turkey is cooked when it explodes from the oven. There were stories of disaster: One neophyte cook left in three of the tea towels used for drying the bird; another produced “horrible smells” by cooking the turkey stuffed “with what God had given it to start with.” Well-meaning Sue Hannon, of Washington, D.C., watched her husband’s carefully wood-grilled roast bounce down the cellar stairs. It slid off the cookie sheet she had balanced on the stair rail and was fetched up tastefully garnished with oak leaves.

Others sent the sort of tales that give meaning to the day. Forty years ago Nancy Garland Manchetti moved from New England to Arizona, far from her father and his famous cracker stuffing. For Thanksgiving he sent her a package containing the dry ingredients and recipe: “probably the first stuffing mix,” she writes, “a shoe box full of love.” Many told of kind neighbors and friends who shared Thanks giving feasts in hard times. Beverly Fox Martin, for instance, whose family (and stuffing recipe) had southern Italian roots, remembered a childhood holiday when her family was so poor that “we might not have had a turkey at all.” They had capon instead, donated by “our neighbor, an Orthodox Jewish woman named Molly Drescher, [who] claimed that she had dropped her original kosher capon on the floor and simply had to buy a fresh one to replace it.”

Most of you base your stuffing on bread, though mixtures of bread and potatoes came in a surprisingly strong second. Crackers were a distant third, and there are actually people out there who are fond and proud of stuffing their Thanksgiving bird with oatmeal. There was rice, but not much, and perhaps not surprisingly the cornbread contingent was darn near silent. It would take some crust to admit to Yankee that you went south at Thanksgiving.

The post Is There a Difference Between Dressing and Stuffing? appeared first on New England Today.

Markets Are Convinced: The Fed Won't Come for the Punch Bowl

Augmented Reality Used in Knee-Replacement Surgery in a U.S. First