As part of the filming for season 3 episode of Weekends with Yankee, cohost and Yankee senior food editor Amy Traverso had a chance to meet up with one of her heroes, Jacques Pépin. Here, she fills us in on the legendary chef.

Today, Jacques Pépin lives and works in the quiet coastal town of Madison, Connecticut, but his life story reads something like an international reboot of Forrest Gump — if Forrest Gump were a worldly, witty bon vivant and Renaissance man living through every major moment in modern culinary history. Here he is as a child in World War II France, fleeing the advancing German army with his restaurateur mother while his father fights in the Resistance. Now he’s barely out of his teens and serving as personal chef to Charles de Gaulle. By the early 1960s he’s in New York, moving among such culinary elites as James Beard and Craig Claiborne and being courted by Jackie Kennedy to come cook at the White House. 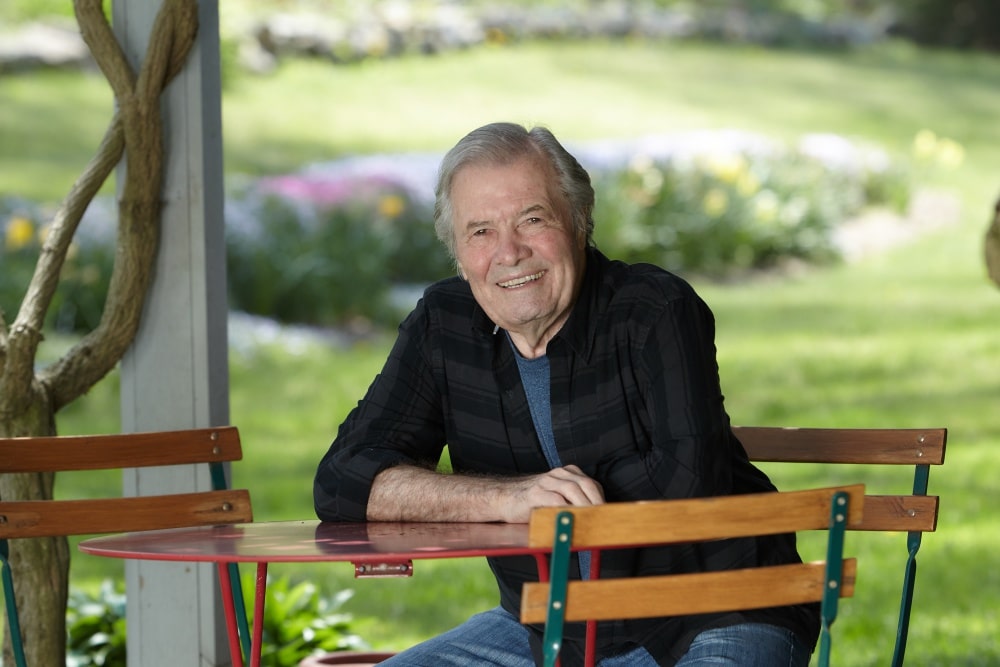 Jacques Pépin at home in Madison. His four-acre property includes the studio kitchen where many of his TV shows were filmed, as well as his Weekends with Yankee appearance.

Pépin turned down that presidential opportunity, however, and New York remained his home for years. But eventually, a more placid (and affordable) existence called to him and his wife, Gloria — first in the Catskills, then in Connecticut. “Gloria and I took a road map of the Northeast and drew a line north and south of New York City,” he writes in his memoir, The Apprentice: My Life in the Kitchen. “The allure of a milder climate made us decide to limit our search to coastal areas.”

It was in Madison that they found their home, on four acres of land that were ideal for gardening and building a court for playing boules. A lifelong forager, Jacques began scouring the coastal landscape for mussels and quahogs, and his own backyard for wild mushrooms. And with that, he writes, “Madison had started to feel a bit like home.”

Below, Pépin shares some of his regular haunts, go-to markets, and favorite restaurants along the Connecticut shore.

How did you chose Madison as your hometown?

It was partially luck. It was close to New York City and in a beautiful area, and we wanted to live near the shoreline. We had friends here and liked the look, feel, and location of Connecticut.

Let’s say you have out-of-town guests coming for a weekend visit. Where would you take them?

Whatever the season, I would take them to nearby Hammonasset Beach State Park. In the summer [we go] for swimming and fishing for whitebait; the rest of the year, we take walks with our two dogs. Also, in the summer I might take them to Mystic Seaport or to Gillette Castle via a ride on the Chester-Hadlyme Ferry.

When you’re cooking or hosting a dinner party, where do you shop for food?

Madison has a farmers’ market on the town green every Friday during the growing season (May through October), so we shop there. I also go to Bishop’s Orchards’ farm market and Cole’s Farm for produce. For staples, I frequent the Big Y supermarket in Guilford.

Describe your perfect day in Madison.

A perfect day means getting up at the “crack” of 9 a.m., having a leisurely breakfast (café au lait and juice, maybe toast), looking at the news, and then going for a walk on one of Madison’s beaches or along a nature trail with my dogs. I’d make lunch at home (a salad, an omelet, or, in winter, soup). In the afternoon, I’d do some painting or, in summer, go to the beach, work in the garden. Then I’d begin cooking dinner at about 4 o’clock, and our friends would come over and we’d serve drinks and play boules at 5. We’d have dinner at around 6:30 at home or, sometimes, at a restaurant.

Where do you, as one of America’s greatest chefs, like to go out to eat?

I do like to be with friends cooking together at home, but when it comes to eating out, I go to the Clam Castle in Madison and Westbrook Lobster in Clinton. For Chinese, it’s Taste of China, also in Clinton. And for a more formal dinner, we go to Le Petit Café in Branford, Bar Bouchèe in Madison, and Oyster Club or Grass & Bone in Mystic.