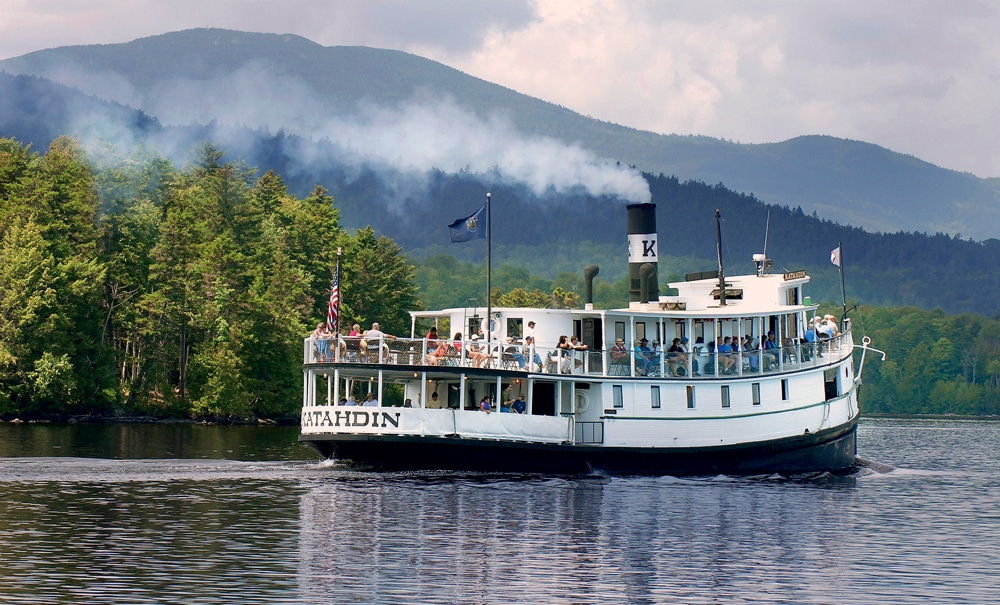 Though it was converted to diesel power decades ago, the Katahdin still gives travelers a taste of the steamship era on Moosehead Lake.

It’s only right that New England’s grandest lakes have equally grand cruising options. On Winnipesaukee, for example, the 230-foot-long Mount Washington cuts an imposing figure; Champlain, meanwhile, is home to Vermont’s only cruise ship, the triple-decked Spirit of Ethan Allen.

One of the most enduring of these lake voyagers is the Katahdin, or “the Kate,” as it’s affectionately known. The 115-foot bluff-bowed steamer rolled out of Bath Iron Works in 1914, toward the tail end of the steamship era on Maine’s Moosehead Lake. During the 19th-century heyday, as many as 50 steamers plied the waters of Maine’s biggest lake, ferrying passengers, livestock, mail, supplies, and equipment.

Of that mighty fleet, only the Katahdin remains. A group of residents saved it from being scuttled in the 1970s, turning it instead into the star attraction of the new Moosehead Marine Museum. Recently outfitted with its first new engine since the 1950s, the Katahdin is back this summer for a slate of cruises that range from a three-hour jaunt to Sugar Island to an all-day run to the head of the lake, in Seboomook. Along the way, passengers are treated to a narrated history of the region. And as with the Katahdin’s fellow cruisers on Champlain and Winni, there will be an opportunity to linger, have a meal, and discover why generations have been drawn to the sparkling waters of New England’s lakes, for both work and play. —Ian Aldrich

Get our full list of 25 inspired ways to see New England from the water” in “Float Your Boat,” our guide to top New England windjammer cruises, scenic ferry rides, adventurous animal tours, and more.

EasyJet will not fly to Italy with distancing on planes: report