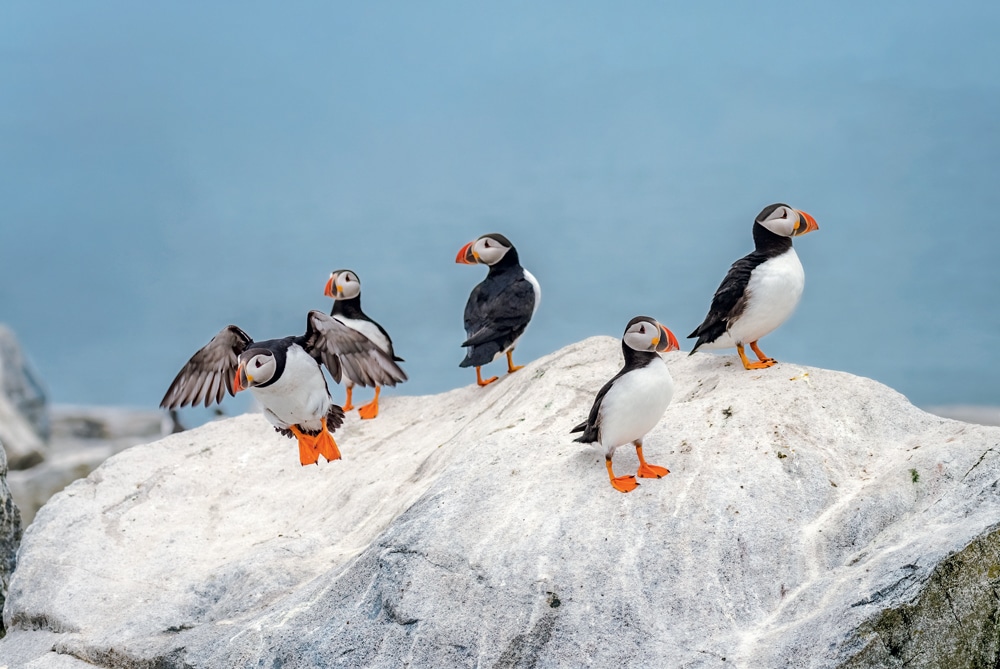 Atlantic puffins on Machias Seal Island, the largest puffin colony in the Gulf of Maine.

Blame it on the beak, that striped spectacle of orange, yellow, and black. Or maybe the adorably plump shape that evokes a mini penguin. Whatever the reason, the Atlantic puffin is a bona fide wildlife star. Just ask Coca-Cola, which gave the bird a leading role in one of its most successful TV spots a few years ago, in which a puffin struggles to open a bottle of Coke before putting that flamboyant bill to work.

Atlantic puffins enjoy such a high profile, in fact, that getting a seat on a boat to go see them can be a tall order. At Bold Coast Charter Company, which operates out of Cutler, Maine, all of the puffin cruises for 2020 were sold out by the first week of January.

“We’ve seen a steady increase in demand for this tour over the years,” confirms Bold Coast’s Andy Patterson, the only U.S.-based tour captain permitted to bring folks ashore at Machias Seal Island, a major nesting site for Atlantic puffins.

I count myself among the lucky few as I make my way at dawn to Cutler’s small harbor, where I find Patterson waiting with a dozen or so bleary-eyed bird lovers. At 7 a.m., it’s anchors aweigh, and we head out on his 40-foot boat, the Barbara Frost.

We glide past working lobster boats returning with their morning haul, and then past salmon farming nets that extend out from the harbor into the Atlantic. This is the Maine shoreline north of Bar Harbor, where summer estates give way to lighthouses standing sentinel above powerful tides and rugged coast. Our destination is about a dozen miles out, at the mouth of the Bay of Fundy: a tiny unspoiled sanctuary for the largest puffin colony in the Gulf of Maine.

Technically part of Canada (and not without controversy over its governance), Machias Seal Island is the Atlantic puffins’ southernmost major nesting site. Though there are smaller colonies farther south—places like Eastern Egg Rock in Muscongus Bay and Matinicus Rock in Penobscot Bay—visitors can view those puffins only from the sea. But if you come to Machias Seal Island on a specially permitted cruise like Patterson’s, and if the weather allows, you can actually climb onto the seaweed-slick rocks and see puffins up close.

After an hour’s ride, we arrive just offshore from the low-lying island and transfer to a small skiff for the landing. Hundreds of seabirds are soaring overhead, searching the waters for breakfast. Some have hooded black heads, like Batman’s; these are the razorbill auks. Others, with their clownish beaks and parrotlike eyes, are unmistakably Atlantic puffins.

The puffins may be rotund, but wow, are they fast, especially when skimming over the sea at speeds of up to 55 mph in pursuit of herring and hake. However, they’re not known for graceful landings on the water, and this is the cause of much merriment for our crew, who hoot and holler at every tumbling splash-down.

The eastern part of Machias Seal Island is also thick with Arctic terns, the puffins’ more aggressive neighbors who keep predators like seagulls away from the eggs of all the island’s nests. If you stray off the main path after landing, you may well be startled by the sharp click-click-click of an irate tern swooping a foot above your head.

After a brief orientation in the middle of the island, we are led to small enclosed observation blinds where we set up shop and watch the puffins return with their catch, some passing within a few feet of our hiding place. The time goes quickly, and after about two hours we reluctantly have to say good-bye to the island.

As we begin heading for home, the Barbara Frost glides around a small hump of land known as Gull Island, where harbor seals can be seen bobbing in the waves. By then, though, most of us are oblivious, lost in sharing our close-up photos of puffins with one another. —Steven Jermanok

When to see puffins:
Mid-May through mid-August

Puffin tour companies:
Only Maine’s Bold Coast Charter Co. and New Brunswick–based Sea Watch Tours land on Machias Seal Island, and when tickets go on sale in January, both sell out fast. But several companies offer viewing opportunities from the water, especially at Eastern Egg Rock in Midcoast Maine. For an overview of options, see the Audubon Project Puffin website.

Get our full list of 25 inspired ways to see New England from the water” in “Float Your Boat,” our guide to top New England windjammer cruises, scenic ferry rides, adventurous animal tours, and more.

A woman said she saw a wolverine on a US beach. Officials didn't believe her