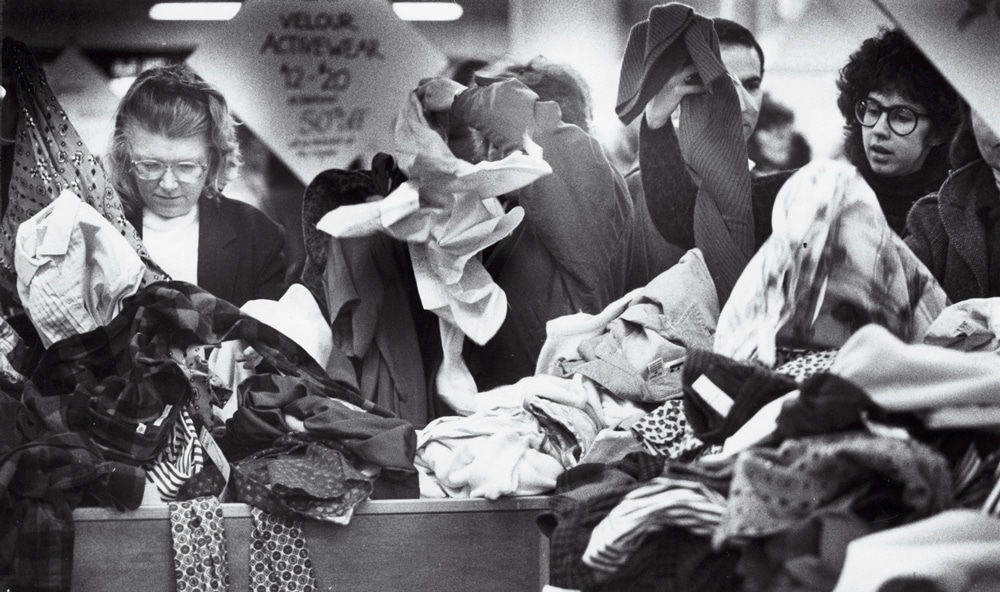 Shoppers dig into the Basement’s no-frills bins in the late 1980s, when the store was still one of Boston’s top attractions.

Two years ago, a 60-story tablet of glass known as the Millennium Tower officially took its place in the Boston landscape. Topped by a penthouse whose price tag set a city record ($37.5 million), it casts a shadow over many of its Downtown Crossing neighbors—including, right at the base of this luxury tower, the former home of some of the best bargains in New England.

The original Filene’s Basement had operated for nearly a century beneath the Filene’s department store at Washington and Summer streets. Known as the “Tunnel Bargain Basement” when it opened in 1909, the store immediately got people’s attention with its sales model: The merchandise, a mix of discontinued designer lines and overstocks, was automatically marked down the longer it went unsold, with anything remaining after 30 days donated to charity.

This meant that patience, luck, and even a little sneakiness (i.e., trying to hide a great piece of clothing from other shoppers until the next markdown) were key to scoring brag-worthy deals in the Basement. And when the annual bridal gown sale, aka the “Running of the Brides,” began in 1947, the ability to throw an elbow didn’t hurt either.

By 1990, the Basement was Boston’s second most popular tourist attraction, drawing up to 20,000 people a day. Visiting celebrities, local politicians, working-class families—they all dug through the motley bins and racks under dingy fluorescent lights, shoulder to shoulder, right up until the store closed September 3, 2007, for a redevelopment project.

In summing up the Basement’s legacy, it’s hard to top the observation of veteran Globe reporter Joseph Dinneen, writing of the store in its heyday, “The Basement is democratic. The first families of Boston mingle with the last families off the boat, and it is the same way with the merchandise.… There is no caste system of any kind in the Basement—no special distinction or special privilege. Big names among people and in merchandise come and go; but the Basement goes its merry way.”

Scenes of Autumn in New England From Our Fall Foliage Forecaster