Narragansett, RI, tends to lure travelers away from more crowded coastal destinations with its beautifully maintained beaches, quirky restaurants, historic landmarks, and laid-back surf-town vibe. Even in the off-season, intrepid surfers charge into some of New England’s gnarliest waves here, while beachy hotels, inns, and restaurants keep summer’s spirit alive. The architectural beauty known as the Towers — the only surviving feature of the glorious Victorian-era Narragansett Pier Casino — seems to remind visitors to embrace enduring pleasures like warm sand underfoot, the rhythmic lull of waves, and super-fresh seafood on your plate.

Whether you’re vacationing in Narragansett, RI, or just passing through, these attractions and experiences should top your list of “musts.”

Things to Do in Narragansett, RI 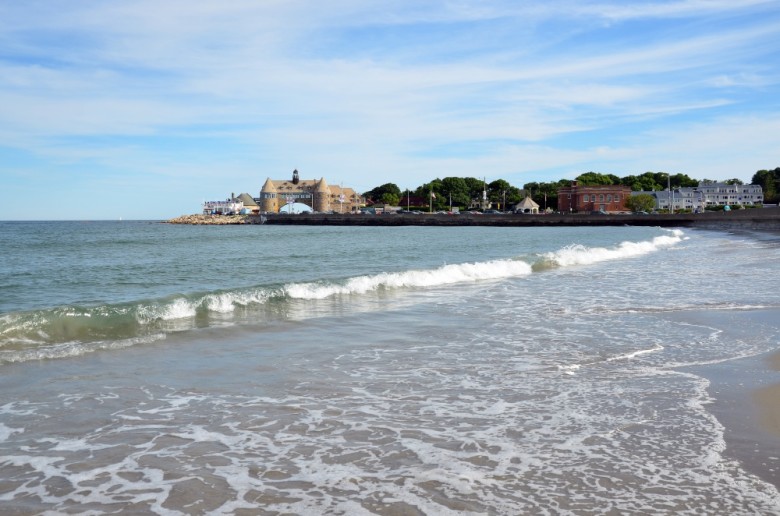 Spend Time at the Beach

Three state park beaches in Narragansett, RI — Scarborough State Beach, Roger Wheeler State Beach, and Salty Brine State Beach — offer ocean lovers plenty of options, but these sandboxes can’t rival Narragansett Town Beach, with its reliably vigorous surf and dramatic view of the Towers. Consider the cost of parking and admission an investment in preserving this crescent of sand for the next wave of children who’ll build castles inspired by this fairytale structure. ADA surf chairs, available at no charge, make this one of Rhode Island’s most accessible beaches. Interested in surfing lessons? Instructors from two in-town outfitters — Warm Winds Surf Shop and Narragansett Surf & Skate Shop — will meet you at the beach with all the gear and encouragement you need. 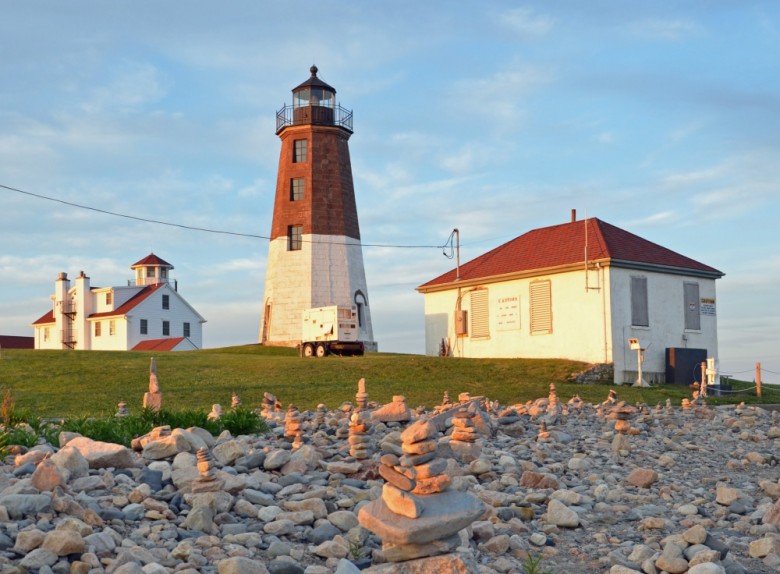 Judith Point Light | Things to Do in Narragansett, RI

Built in 1857, the octagonal brown and white lighthouse at Point Judith overlooks a treacherous spot where shipwrecks were once a common occurrence. So when you visit this free attraction, admire not only its scenic appearance but also its vital role as a still-active navigational aid. For panoramic views of Point Judith Lighthouse, turn off Ocean Road and visit the Point Judith Fishermen’s Memorial, which honors locals lost at sea. Then, get a close-up look at the beacon by visiting the grounds of the Point Judith Coast Guard station. Building cairns with the ocean-smoothed stones washed ashore beneath the lighthouse is challenging fun for kids and grown-ups, too.

Places to Eat in Narragansett, RI 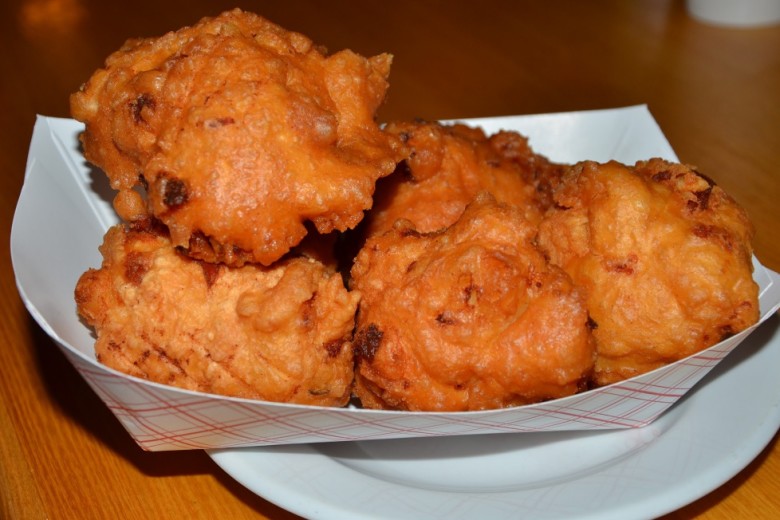 You have to try clam cakes — those doughy, clam-studded, golden-fried blobs — while you’re in Rhode Island, so why not head straight to the Narragansett restaurant where they’re made by descendants of their creator? It’s been nearly a century since Carrie Cooper and her husband, Ulysses, began serving her invention to hungry fishermen. Today, lines form at Aunt Carrie’s from April through September for these satisfying fritters, plus other sea treats including chowder, fish and chips made with just-caught Point Judith flounder, and complete shore dinners. In the mood for lobster? You’ll also find Aunt Carrie’s on Yankee’s list of the 12 Best Lobster Shacks in New England. 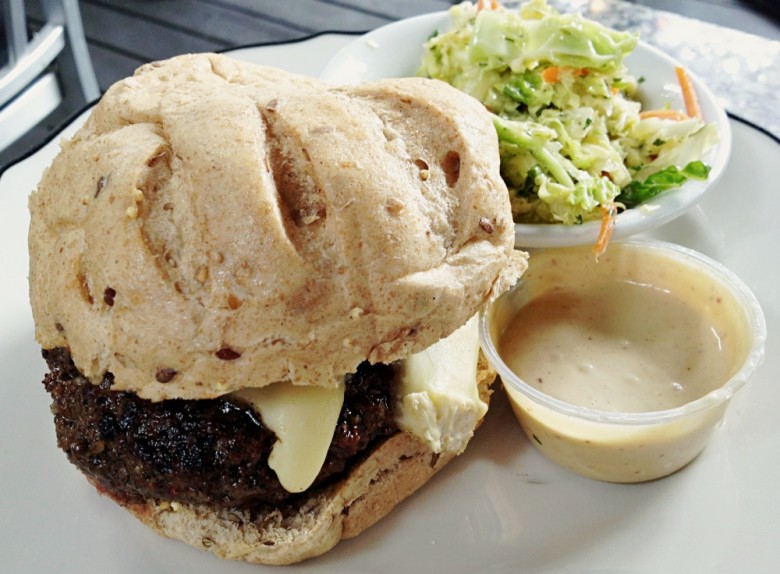 It’s not insane to want to eat breakfast, lunch, and dinner at Narragansett’s star eatery, Crazy Burger. This indoor-outdoor, vegan-friendly restaurant has earned TV appearances and a huge following thanks to its eclectic menu and high-caliber cooking. Open year-round on an out-of-the-way street about a 15-minute walk from Narragansett Town Beach, Crazy Burger serves breakfast until 4 p.m. daily, so you can sleep in and not miss favorites like cinnamon roll French toast, tofu scrambles, and omelets made with your choice of more than 25 add-ins. The burgers are the zaniest, with poultry, fish, bean, tempeh, and mushroom options in addition to beef. Even if you take advantage of the BYOBBAM (Bring Your Own Booze, By All Means!) policy, try one of Crazy Burger’s made-to-order juices, shakes, lemonades, and smoothies.

Places to Stay in Narragansett, RI 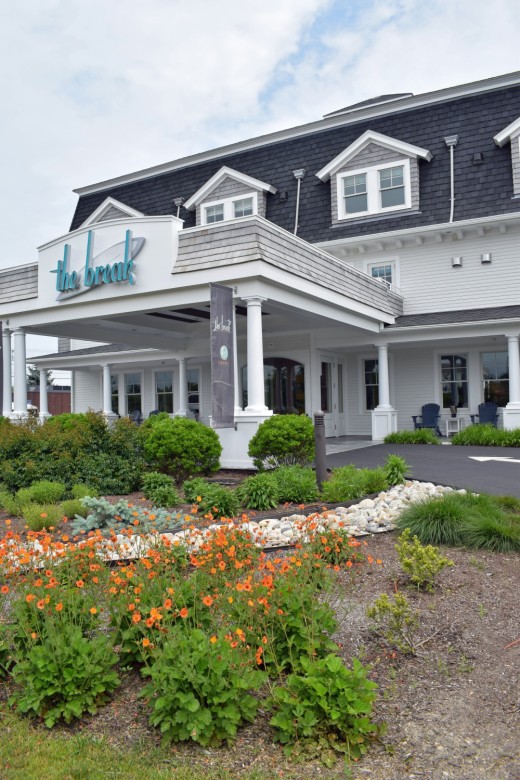 The Break | Places to Stay in Narragansett, RI

Vacation in Style at the Break

You could buy an ocean-view cottage and hire one of Rhode Island’s top interior designers to furnish it with retro-chic, seaside appeal. But it’s so much easier to reserve one of 16 spacious guest rooms at Narragansett’s only boutique hotel, the Break. This couples-focused property has an intimate spa, a saltwater outdoor pool that is heated to jump-right-in temperature year-round, and an on-site restaurant, Chair 5, that serves creative, upscale fare featuring the best local seafood, meats, and produce. Even if you’re not staying overnight, head up to the rooftop lounge for a Narragansett Lager, a glass of wine, or a signature cocktail, and enjoy the sunset view. 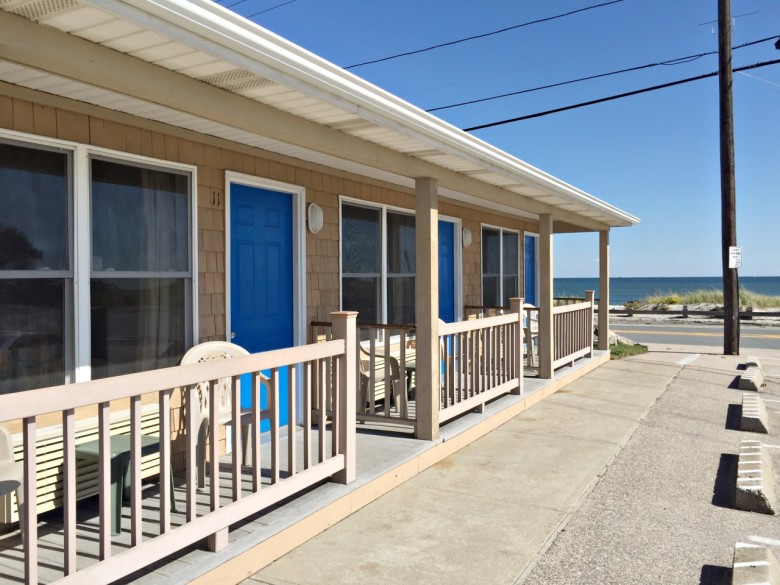 The Anchor Motel | Places to Stay in Narragansett, RI

Courtesy of The Anchor Motel

Save Money at the Anchor Motel

Taking your family to the beach can be expensive. But the clean, cozy, family-owned Anchor Motel will save your budget. Not only are its 15 nonsmoking rooms affordable and nicely equipped, but it also boasts a prime location. You’ll be directly across the street from popular Scarborough State Beach, so you can play in the waves every day and never pay for parking or beach access. Morning coffee and doughnuts are free, too. Although the motel is seasonal, two B&B rooms in the owners’ adjacent home are available year-round.

Have you ever visited Narragansett, RI? Let us know your favorite things to do and see there!

The futuristic yacht that's designed from the inside out

UK crashes into deepest recession of any major economy