If taste is linked to memory, then one of the easiest ways to jump back to childhood is to eat Necco Wafers.

Even tearing the paper to unroll the tube does it — the puff of powdered sugar and mingling flavor-scents, both sweet and spicy, hitting your nose. Lemon? Wintergreen? Chocolate? Yes, the combination can seem odd by today’s candy standards, but the flavor blend is a familiar one if you grew up eating Necco Wafers, and just one bite (which is more of a “SNAP”) makes the time-travel complete.

For your tastebuds, anyway. 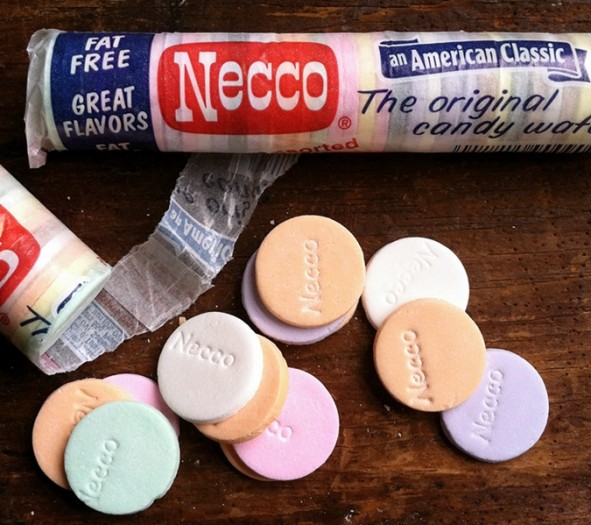 Necco Wafers are a New England made American classic.

Necco Wafers, it must be said, taste like a candy invented in 1847, but despite the 19th-century approach to texture and flavor they’ve held on to their place at the checkout next to richer, fattier, and fruitier candies. Nostalgia aside, I suspect that the wafers’ exceptional use as gingerbread house shingles, edible poker chips, or practice hosts for a first communion that kept these wafers popular for so long.

Curious about Necco Wafers history? The candies have been around since 1847, but the New England Confectionery Company (NECCO…see that?) in Revere, MA, made them for more than a century. During the early 20th century explorers took them to the Arctic and the South Pole, while the army sent them to soldiers overseas during WWII because the wafers didn’t melt or spoil. 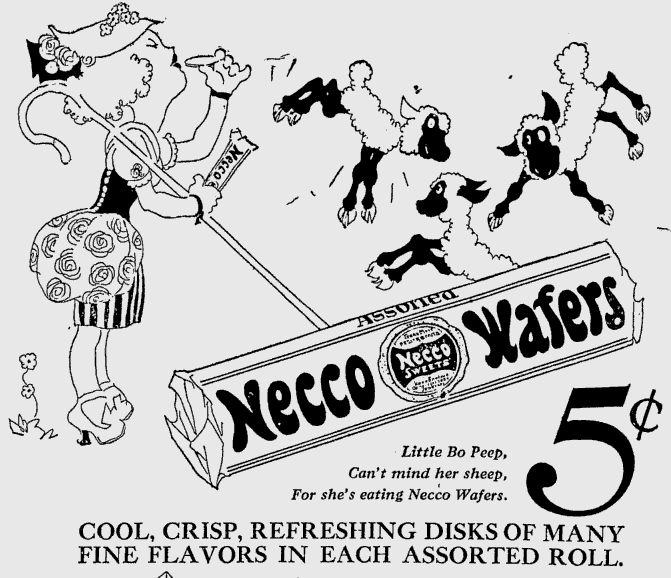 A Necco Wafers newspaper ad from 1922.

While it’s true that there are many folks who find Necco Wafers chalky and bland (the candy routinely come in last alongside the marshmallow circus peanut on the annual list of “What’s the worst Halloween candy?”), Necco wafers continued to sell, to the tune of about 4 billion wafers a year. In 2018, as Necco was suddenly sold and stopped production, Necco Wafers became one of the year’s most popular web searches, according to Google. Not bad for a candy recipe from the days of the Mexican–American War.

So which camp do you belong to? Necco Wafers lover or not? Personally, I can’t get enough of the clove.

For a year or two, the world was without Necco wafers, but I am happy to report that Necco Wafers are finally back! So what happened? In 2007, the Necco company fell on hard times and was sold to an investment firm. Financial losses continued, and in 2017 another company took ownership, then another in 2018, but hopes for Necco’s survival were dashed (seemingly for good) on July 24, 2018, when the Necco Revere facility closed. The company’s approximately 230 workers and executives were laid off, and production of all candy lines stopped, ending the Necco Wafer’s reign as the country’s longest-running, continuously produced candy.

Necco’s long-running candy lines were sold to other manufacturers, with the Necco Wafer, Sweethearts conversation hearts, and Canada Mints going to the Spangler Candy Company of Ohio, best known for their Dum Dum Lollipops. Spangler quickly announced plans for both Necco Wafers and Sweethearts to return to store shelves. I caught my first glimpse of the Spangler Necco Wafers this summer, and was pleased to see the familiar logo and packaging. 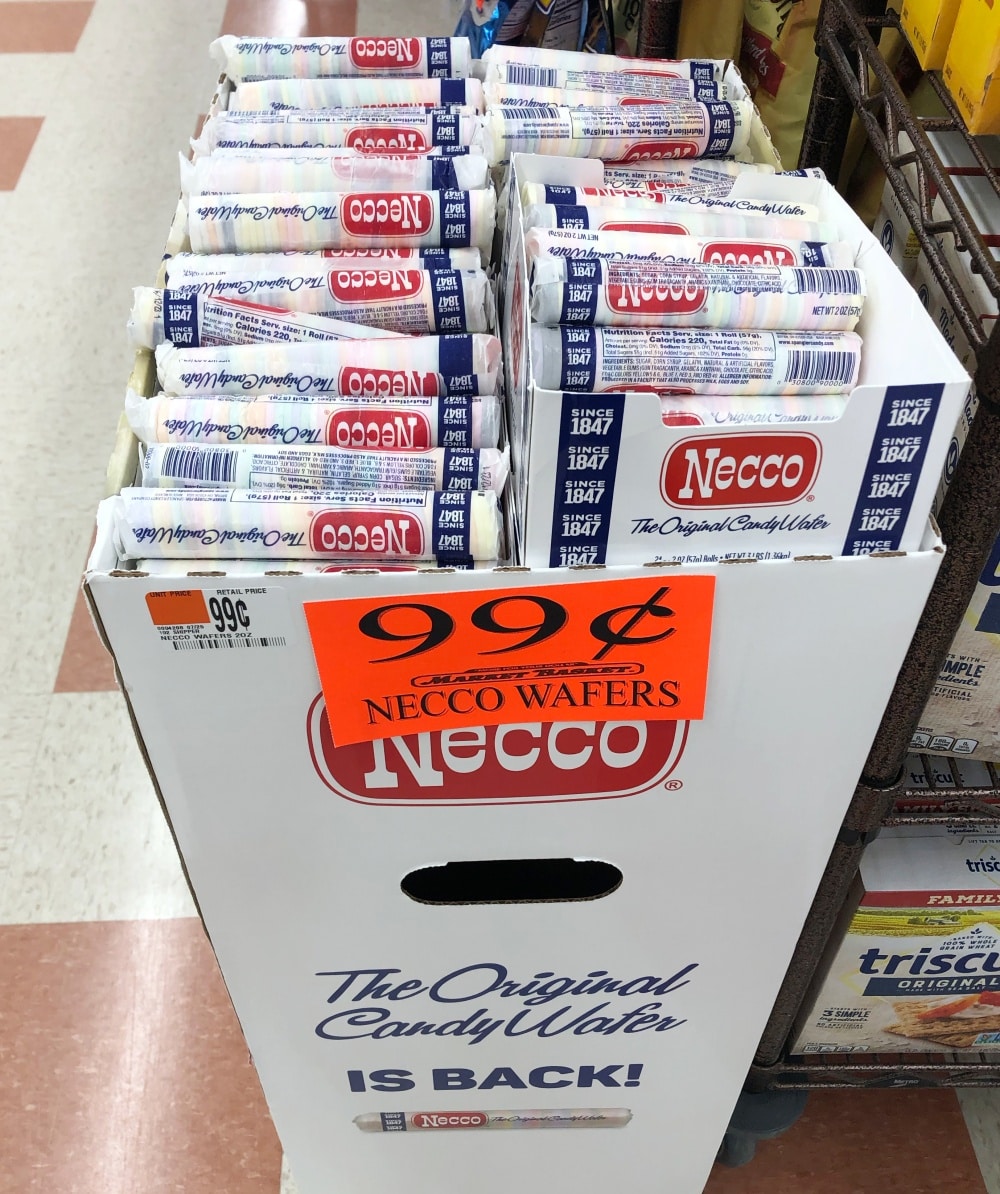 Necco Wafers (now made by Spangler) are for sale again at Market Basket in Hooksett, New Hampshire. 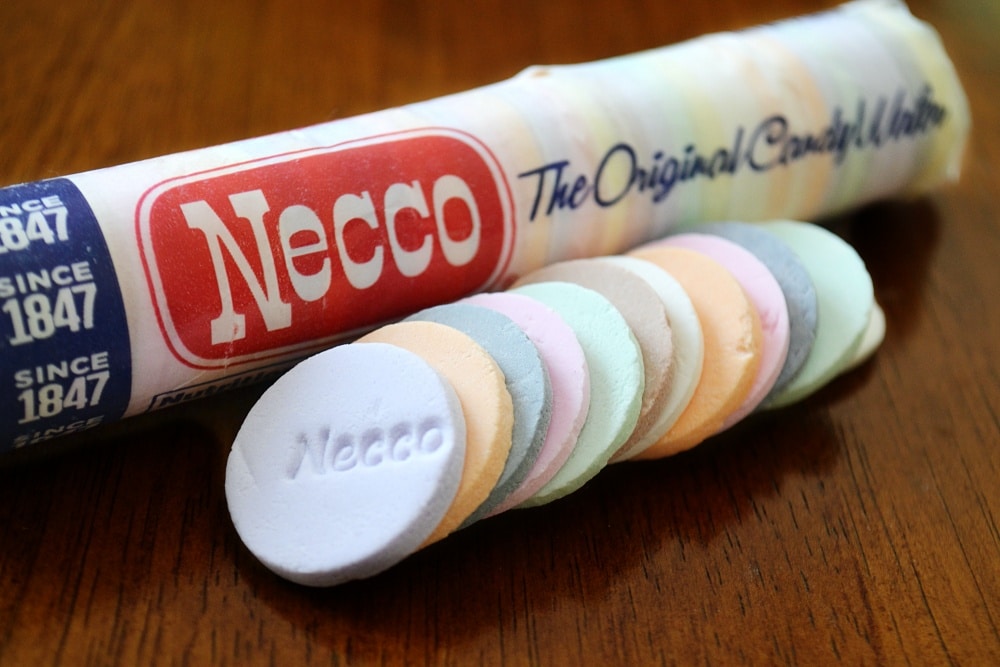 Packaging updates include the “Since 1847” band to the left of the logo, and updated type for “The Original Candy Wafer.”

Watch some of this year's best Emmy acceptance speeches