There is a special sort of satisfaction that comes from knowing you’ve visited the locations of your favorite films. Even more gratifying is seeing a place you know and love appear alongside Leonardo DiCaprio or Brad Pitt. New England may be a far reach from the bright lights of Hollywood, but every once in a while, we do make an award-winning appearance. 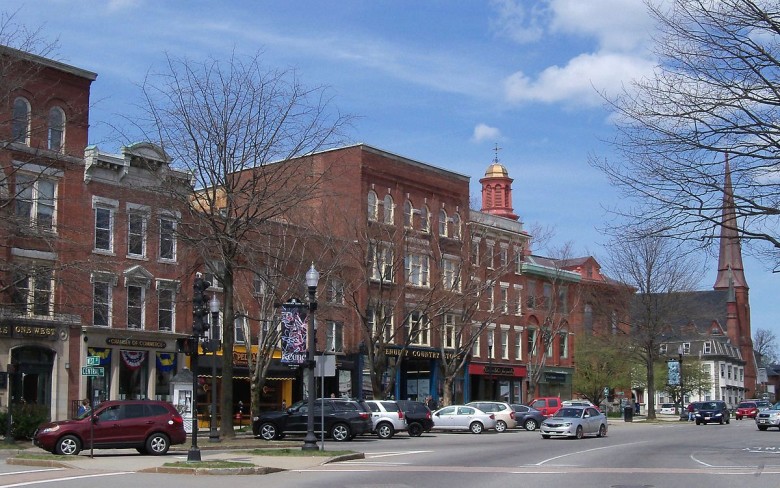 Keene, New Hampshire, served as the backdrop for much of 1995’s Jumanji.

Oftentimes, filmmakers will come and go silently without actors — or even directors — ever setting foot here. They’ll gather aerial footage of our picturesque towns and make a swift return to the California coast. Occasionally, though, New England lures in a big studio, charms a director, and earns a little extra screen time. They may have sandy beaches and endless sunshine in California, but New England has a seasonal magic you can’t find anywhere else.

Here is our list of the “must-see” New England film locations!

Maine, home to the infamous Stephen King, is often the backdrop of horror films. Lake Placid (1999), The Mist (2007), The Uninvited (2009), and Dark Shadows (2012) all take place in quintessential small towns of Maine, and with few exceptions, Maine is used for the stuff of nightmares. Despite the dark themes, the filmmakers have managed to pick some incredible sights.

Martin Scorsese used Otter Cliff in Acadia National Park to film the cliff scenes in Shutter Island, which was set off the coast of Massachusetts. 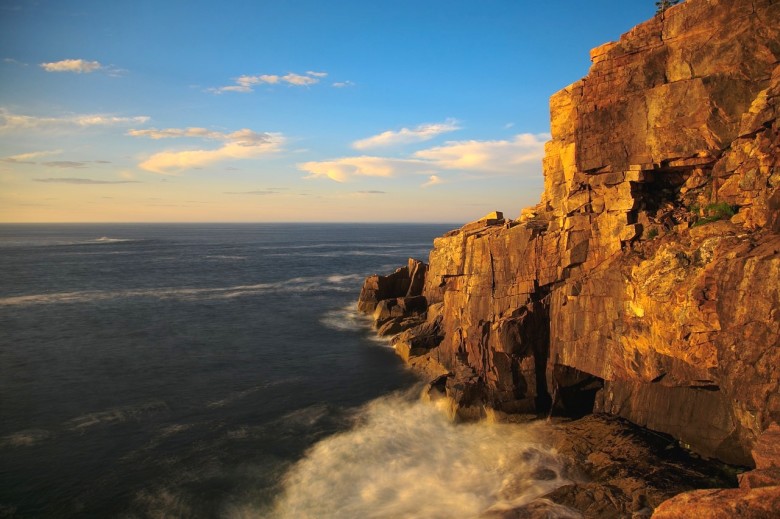 Although it’s not on screen for long, the Marshall Point Lighthouse makes an appearance in Forrest Gump as Forrest jogs to the end of the dock on his trek across America. 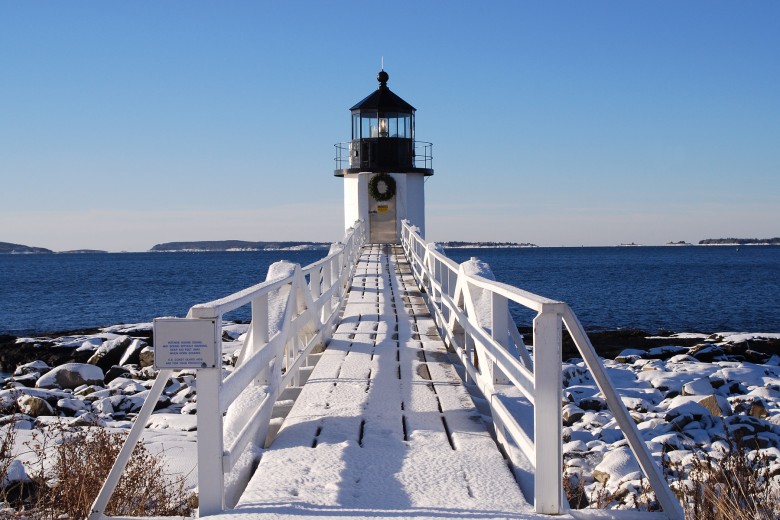 In Pet Semetary, author Stephen King has a cameo as a minister presiding over a funeral in Mount Hope Cemetery.

SEE MORE: The Most Beautiful Cemeteries in New England

The classic Halloween film Hocus Pocus was filmed all over Salem, MA. The Ropes Mansion, operated by the Peabody Essex Museum, is one of those many places. You can even attend a walking tour that will point out other film locations, as well as Salem’s historic and haunted past. 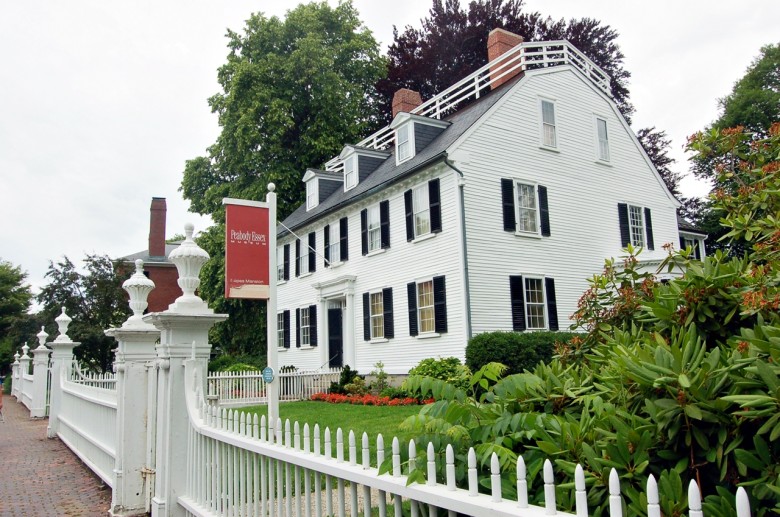 Good Will Hunting was filmed in several locations around Boston. In the film, Will Hunting (Matt Damon) and Sean Maguire (Robin Williams) share a scene in the Boston Public Garden. This area served as a memorial after Williams’ passing in 2014. 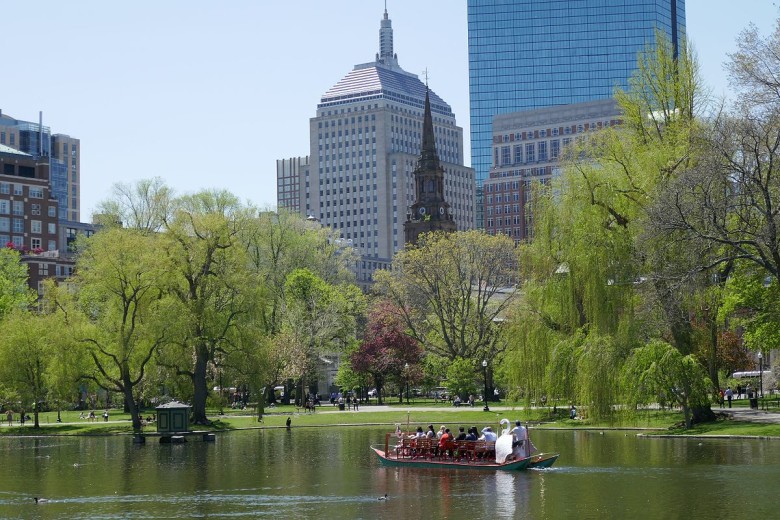 With the filming of Jaws on Martha’s Vineyard in 1975, Steven Spielberg made “Jaws Bridge” famous. Today, swimmers use the bridge as a makeshift diving board to jump into the cool (and shark-free) waters below.

Connecticut, with its proximity to New York City, is second only to Massachusetts when it comes to film activity. Many well-known films have hit its streets, among them: Mr. Deeds (2002), Jacknife (1989), The Stepford Wives (1975), and Indiana Jones and the Kingdom of the Crystal Skull (2008).

Alfred Hitchcock’s 1951 film Strangers on a Train was partially filmed at the Danbury Railway Station. The station has since been turned into a museum. If you look closely at this still from the film, you can see a sign for the “Danbury Diner,” which is still there to this day! The family-owned restaurant is now called “The New Holiday Diner.”

Wes Craven chose Kent, Connecticut, and surrounding areas for filming his 2010 horror flick, My Soul to Take. An area north of Bull’s Bridge on Schaghticoke Road was used for an ambulance crash and ritualistic scenes. Several other towns in Connecticut were used for filming, including Danbury, New Milford, Fairfield, Norwalk (Cranbury Park area), and Tolland (Tolland High School).

Okay, I may have cheated a little here. Mystic Pizza wasn’t filmed in Mystic Pizza. Rather, the restaurant was the inspiration for the movie. The filming did, for the most part, take place in Mystic, CT. The scenes inside the restaurant had to be filmed on a set because the real location was too small. 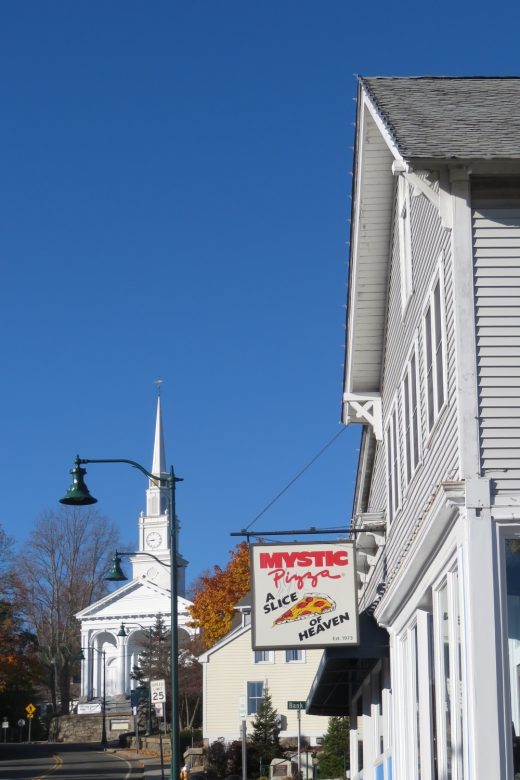 Films set in New Hampshire are an eclectic mix, most of which involve Adam Sandler. But films that actually use New Hampshire as a location? Well, there aren’t too many. However, if you live here (or if you’ve taken a film class at Keene State College), you won’t fail to hear about the state’s several claims to fame.

There’s an infamous scene in Jumanji in which jungle animals stampede through the fictional town of Brantford. That moment was filmed in Keene, NH, and if you watch closely, you may recognize some of the shops and landmarks. Also in Keene, you’ll find a mural advertising the Parrish Shoes company from the film. It was taken down after filming and then repainted later on. After Robin Williams passed, it served as a memorial. 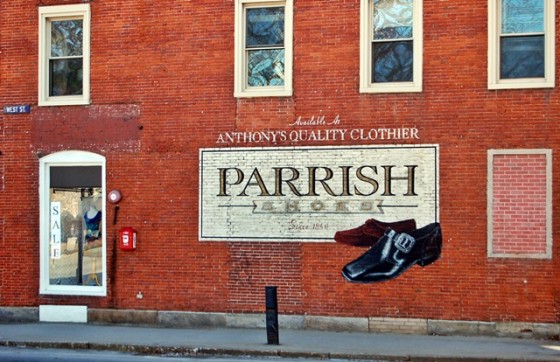 There’s a scene in The Good Son in which Henry (played by Macaulay Culkin) takes his sister ice skating and attempts to kill her. This was filmed in Jackson, NH, on Mirror Lake. Another scene was filmed in Newington, NH. 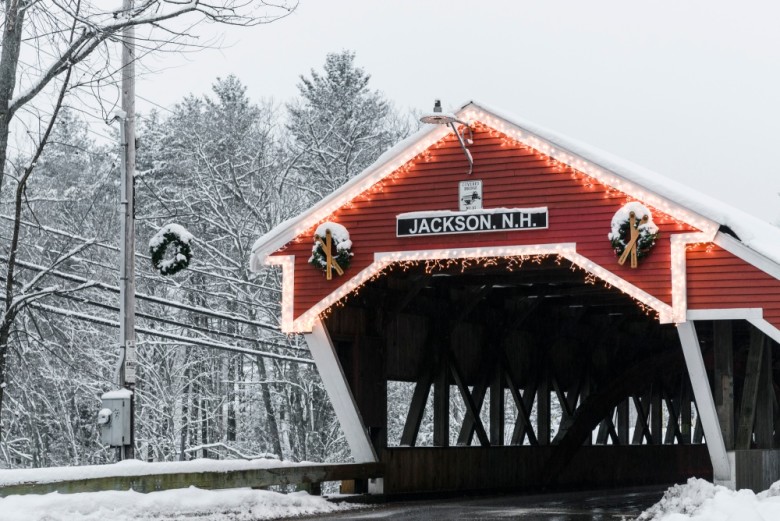 On Golden Pond takes place in Maine, but the movie was largely filmed on New Hampshire’s Squam Lake.

Like Maine, Rhode Island’s stunning coast is primarily what attracts filmmakers to the area. The state’s seaside towns and nostalgic views have a charm you can’t quite capture anywhere else.

The Rosecliff Mansion in Newport, RI, is used in several films. If you happen to take the tour, you’ll have no trouble seeing why. 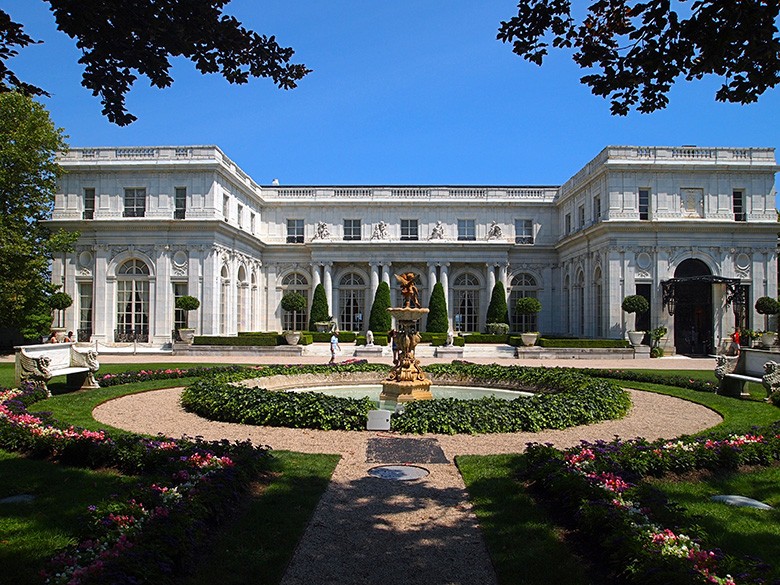 One of the locations for the film Meet Joe Black, starring Brad Pitt, was the Aldrich Mansion in Warwick, RI. 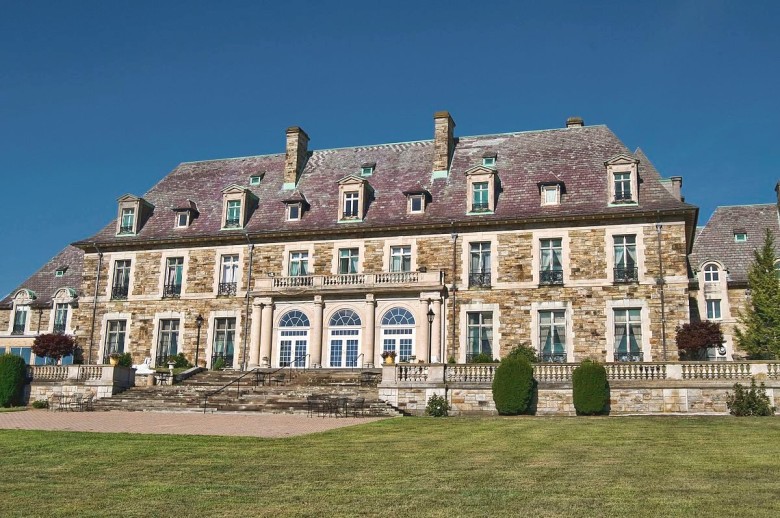 Wes Anderson was all over Rhode Island filming Moonrise Kingdom, so it’s difficult to pin down just one place. However, if you watch the film you may recognize a few locations, including Fort Wetherill State Park, Castle Hill Lighthouse, and Point Judith Light. 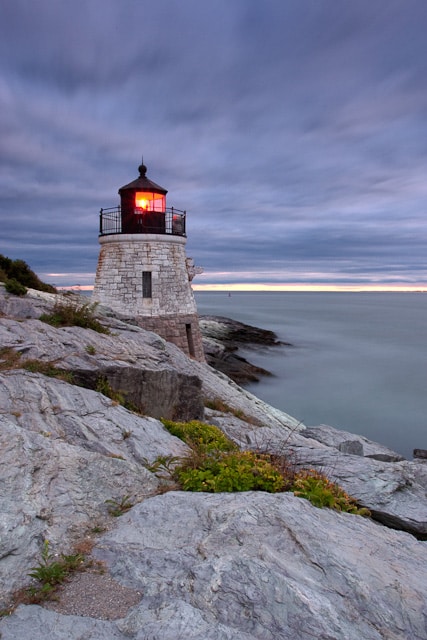 Vermont generally appears on film as the perfect winter wonderland. However, as New Englanders know, winter is not always so picturesque and the weather hardly cooperates with our wishes. Therefore, scenes like this often get shot on a lot in Hollywood. There hasn’t been much film bustle in Vermont in recent years, but it was the scene of a few classics.

During a heart racing scene, Lillian Gish floats down the river on an ice floe. No special effects were used. 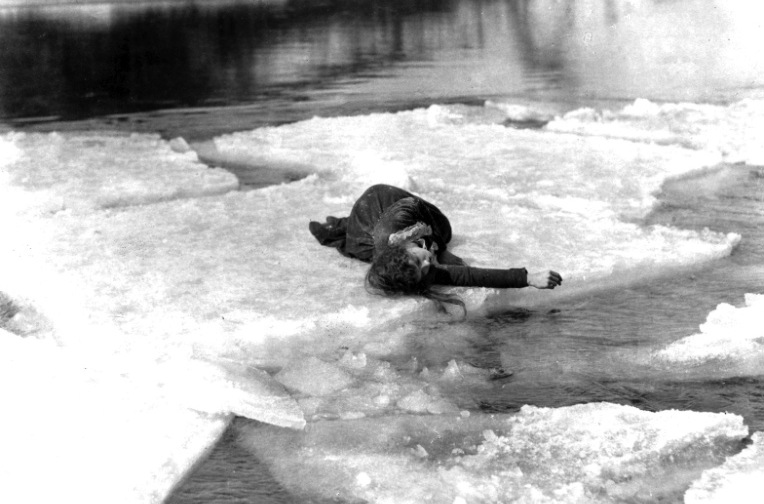 During a heart racing scene, Lillian Gish floats down White River Junction on an ice floe. No special effects were used.

Scott Farm is one of several locations used for The Cider House Rules, which was also filmed in Bellows Falls. 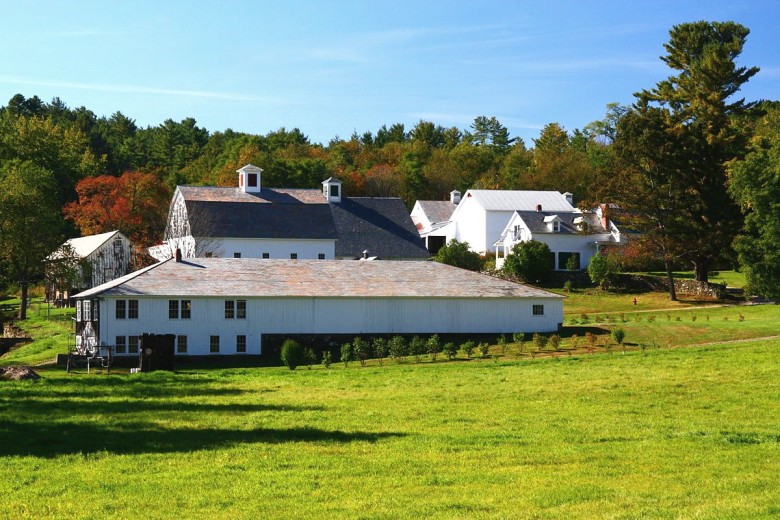 Alfred Hitchcock used Craftsbury, Vermont, as the backdrop for his film The Trouble With Harry.

Do you know of any other New England film locations? Let us know in the comments!

Our Most Popular Recipes Ever