Prized Cup | Up Close with the Hoodsie Cup

For seven decades and counting, scores of New Englanders have participated in a beloved ritual: Grabbing the paper tab at its edge, we pull the lid from a Hoodsie Cup, lick it, then scoop the chocolate and vanilla ice cream from the paper cup using the paddle-like spoon.

When Hoodsie Cups debuted in 1947, the cups cost a nickel and the collectible lids featured celebrities of the time, including baseball players and movie stars like Bob Hope, Ginger Rogers, and John Wayne. Little else has changed about this three-ounce cup of ice cream, now an iconic regional treat that’s part of birthday parties and ball games alike. (Hoodsie maker HP Hood is the official dairy of the Boston Red Sox, and the cups bear the team logo.) 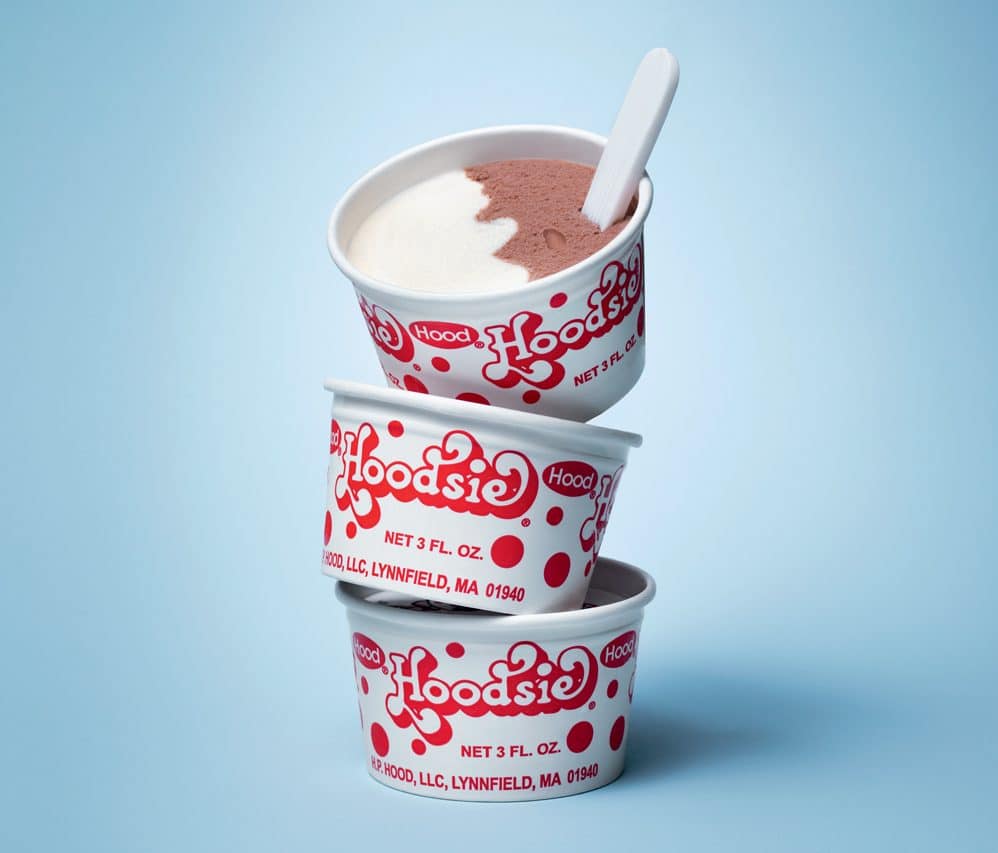 Hoodsie Cups have been sweetening the lives of New Englanders since 1947.

Today you can purchase Hoodsie Cups from ice cream trucks and grocery stores in every state in New England and parts of upstate New York, but more are sold in Massachusetts, where HP Hood has been headquartered since its founding in 1846, than anywhere else.

The Bay State also boasts Operation Hoodsie Cup, a collaboration between Hood and the Boston Police Department. Officers drive a custom ice cream truck to various neighborhoods and events throughout the city, distributing free Hoodsies. In a typical summer, the BPD gives out about 10,000 cups a month to residents both young and old.

But for most kids around here, the Hoodsie Cup needs no introduction. In the words of Matthew Jennings, author of Homegrown: Cooking from My New England Roots: “Hoodsie Cups are a New Englander’s birthright, as much a part of our culinary culture as fried clams, fluffernutters, and frozen lemonade.” We break out bags of them when kids convene for twilight bike rides. We pull individual cups from convenience store reach-in freezers. When given the option at the snack bar, we opt for a Hoodsie Cup instead of the neon-colored cartoon-branded ice cream bar du jour.

And no matter the season, if we go to a kid’s birthday party we invariably find, resting next to the cake, the Hoodsie Cup. Then we do what generations have done before: Peel off the lid, unwrap our paddle, and get to work before the ice cream melts to foam.

The post Prized Cup | Up Close with the Hoodsie Cup appeared first on New England Today.