With its flavorful seasonings and satisfying crunch, party mix (more commonly known as “Chex Mix” for the brand of cereal that popularized the recipe) is a favorite American party snack — especially during the holiday season. Traditionally made from a combination of seasoned cereals, nuts, pretzels, and other crunchy tidbits, recipes for party mix are so easy to customize that many families will fine-tune their own signature “house” version. 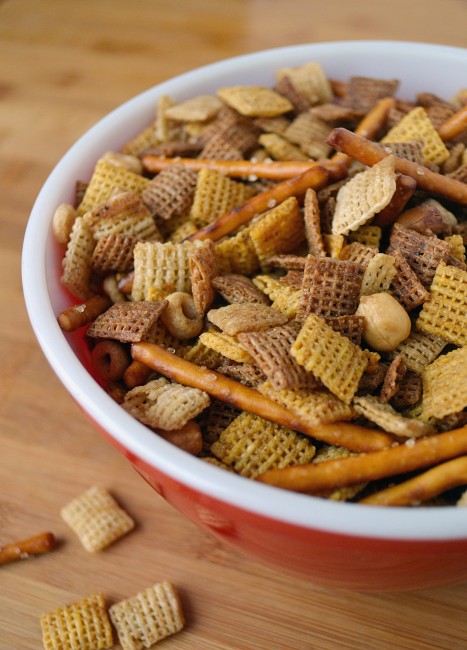 Ever wondered about the history of party mix? Not surprisingly, it began with the invention of Wheat Chex cereal by Ralston Purina (yes, that Purina) in the late 1930s, only then the cereal was known as Shredded Ralston. The name was officially changed in 1950, the same year Rice Chex was introduced. The word “chex” was a play on the red and white checkerboard logo that Purina still uses today.

It’s likely that versions of party mix were enjoyed throughout the late 1930s and 1940s, but Ralston Purina didn’t begin publishing their official party mix recipe (printed on the box, of course) until 1952. It included both kinds of Chex and nuts, tossed in a combination of Worcestershire sauce, butter, garlic salt, and salt. Everything was mixed together and baked in the oven at a low temperature, then cooled and stored until ready for munching. When Corn Chex arrived on the scene in 1958, it quickly joined the party (mix).

Future savory recipes evolved to include additions like pretzels, bagel chips, melba toast, cheese crackers, oat cereal, and seasonings like onion powder or ranch dressing mix. And those bags of pre-made Chex Mix (now made by General Mills) in multiple savory and sweet flavors? They didn’t begin to arrive until 1985. 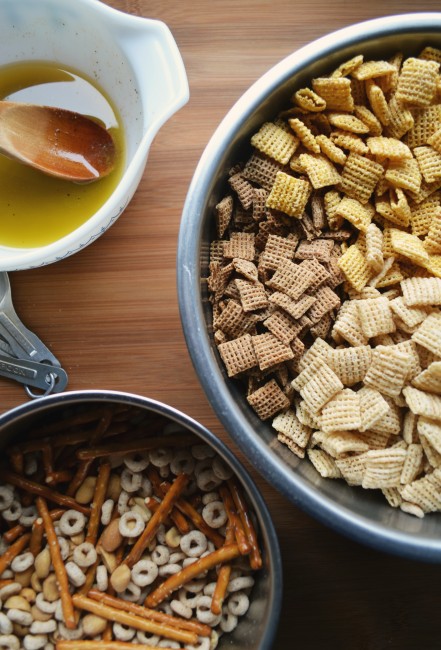 Making this homemade party mix couldn’t be simpler. First, place the cereals, nuts, and pretzels in a large bowl (either really large, or 2 average large) and mix together. Then, in a separate bowl, stir together a stick of melted butter, two tablespoons of Worcestershire sauce, and one teaspoon each of garlic powder, onion powder, and seasoned salt.

Distribute the cereal mixture into one large or two small roasting pans, then drizzle the melted butter mixture over the cereal and toss to coat. A rubber spatula works best here, since you can work it under the edges of the cereal with minimal crushing. 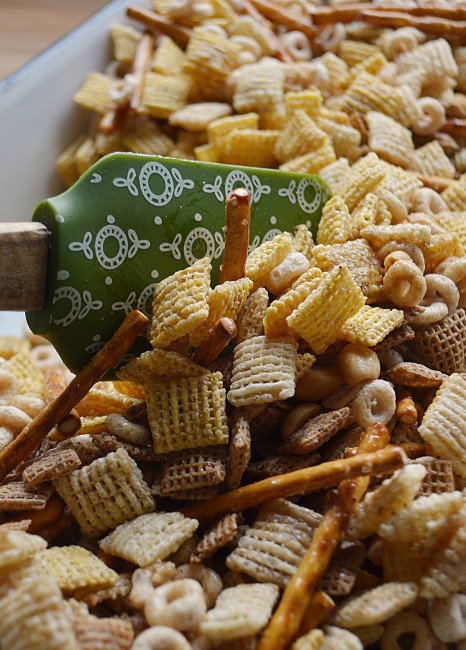 Toss to coat, then cover and bake!

By this point, it’s hard to stop yourself from sneaking a piece or two, so just go for it. Let the party mix cool to room temperature, and then store it in airtight containers or zip-top bags until it’s time to dig in. 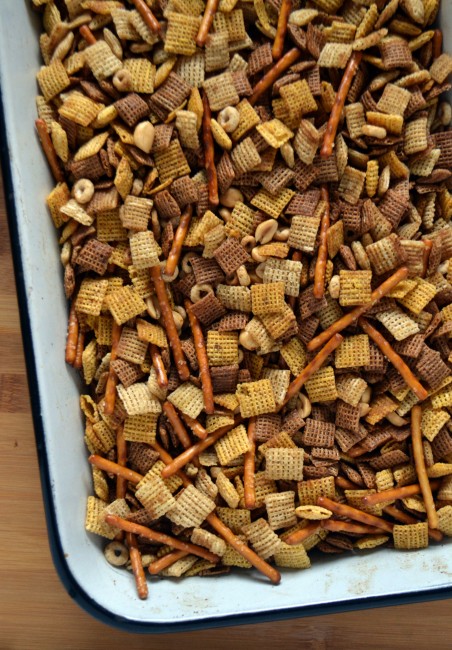 This party mix is ready to party.

Does your family have a favorite party mix addition? Tell us about it in the comments!

GET THE RECIPE:
Party Mix