What do you get when you add coffee syrup to ice cold milk? In one place, you get the official state drink — Rhode Island coffee milk.

While a few other beverages have also achieved a high level of fame in the Ocean State (namely Del’s Lemonade and Narragansett beer) coffee milk earned the official top spot in 1993 thanks to its “uniquely Rhode Island” reputation. A common argument goes that you can get lemonade or beer just about anywhere, but ask for a coffee milk outside of Rhode Island and its neighboring towns, and you’re likely to get a look of extreme confusion.

Mysterious as it may be to outsiders, coffee milk is a pretty obvious leap for anyone who’s had a glass of strawberry or chocolate milk. Sugary syrup (commonly made from instant coffee mixed with sugar and corn syrup) is bottled and added, a few spoonfuls at a time, to a glass of milk, then stirred, and enjoyed. 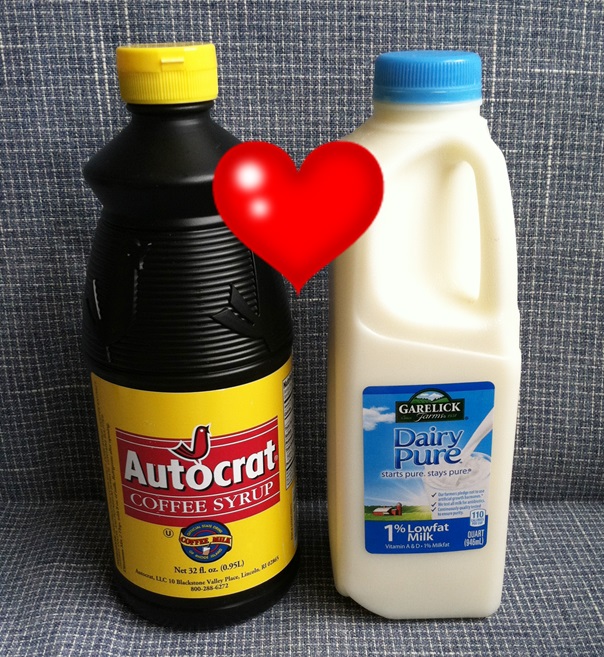 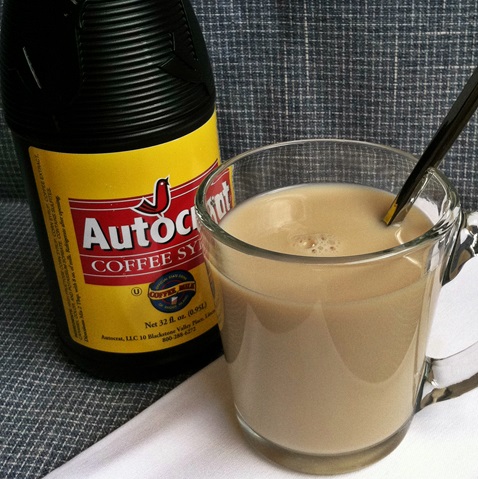 Rhode Islanders have been slurping up coffee milk from local brands with gusto since the late 1930’s, when first Eclipse (based in Warwick) and then Autocrat (based in Lincoln) began selling bottles of the sugary, slightly-caffeinated syrup. In 1991, the “coffee syrup wars” finally ended when Autocrat purchased their long-time competitor, but rather than absorbing one brand into the other, they just keep making both. Actually, they make three. A third label, Coffee Time Syrup, is mostly sold to markets outside of Rhode Island. And in case you were wondering if they all taste the same, die-hard coffee milk fans will tell you (or they told me) that Autocrat is just a little bit sweeter.

Originally marketed at children as a way to get them to drink their milk, today the syrup is a favorite of both young and old, and transplanted Rhode Islanders take to the web to keep their kitchens stocked. 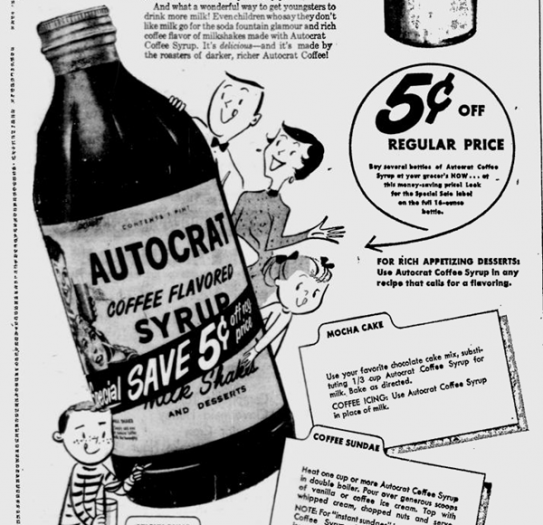 While Autocrat might be the most familiar to coffee milk fans, newer local brands like Dave’s Coffee (a winner in the 2013 Yankee Magazine Editors’ Choice Food Awards) have their own following thanks to their all-natural syrups in original, vanilla, and mocha flavors made with no artificial colors, sweeteners, or high fructose corn syrup — and we can’t help but love the funky, retro packaging.

Want your coffee milk cold and creamy? Just add some vanilla ice cream and blend the whole thing together into a coffee cabinet (that’s a frappe to other New Englanders and a milkshake to those that are really from away). And if, by chance, you want your coffee milk and Narragansett beer together, the latter debuted a limited-edition Autocrat Coffee Milk Stout in 2013, blending the brand’s bittersweet milk stout with dark Autocrat coffee.

We hear it goes great with an Olneyville New York System hot weiner.

Are a fan of Rhode Island coffee milk? Do you have a favorite brand of coffee syrup? Let us know!

SEE MORE:
75 Classic New England Foods
The Difference Between a Milkshake and a Frappe (and a Cabinet)
Johnnycakes Recipe

Historic Amesbury, Massachusetts | A Small-Town Community in the City

Scenes of Winter in Stowe, Vermont