Spreads and Risk over the Past Week (and Months)

A Dying Teacher, Worrying Over Students to His Last Breaths

#2037 Adii Pienaar on his darkest moments

How to Grow Your Business with SEO

The UK’s first industrial contribution to the ISS: An end to sneakernet for spacefarers

CFD Stock Trading: What Does It Mean and How Can It Be Done?

How to Pay for College (and Not Lose Your Shirt)

Schools Were Set to Reopen. Then the Teachers’ Union Stepped In.

After the Capitol Was Stormed, Teachers Try Explaining History in Real Time

This Really Is Fine!

What Is Overall Equipment Effectiveness And Why Is It Important For An Organization?

Biden Is Vowing to Reopen Schools Quickly. It Won’t Be Easy.

I’ve been amazed at how little the last week’s political turmoil has shown up in financial markets. The only thing that seems to have moved anything is the apparent control of the Senate moving to the Democrats. 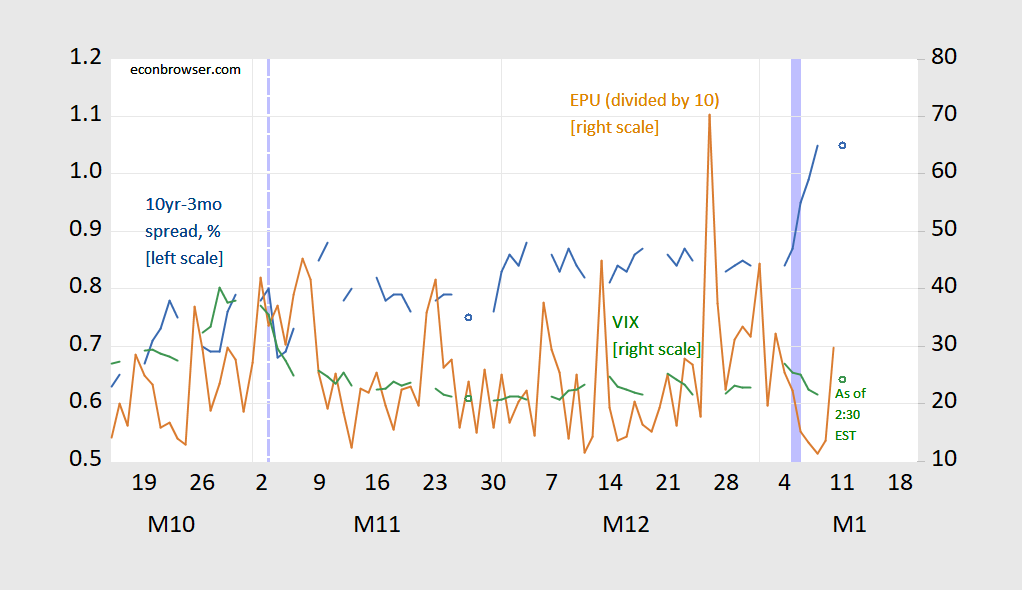 You would think with the president of the United States inciting an insurrection against the legislative branch, there would be heightened perceived risk (VIX) and/or heightened uncertainty regarding the course of economic policy (EPU), but no pattern is apparent to my eyes.

The term spread on Treasury’s has increased. This outcome could be attributed to the expectations of either more fiscal stimulus and hence larger expected deficits, more vigorous anticipated growth, or both. These are the most commonly cited reasons for yield curve steepening.

Torsten Slok (Apollo) argues (not online) that a good portion of the steepening pre-Georgia (from August onward) is due to a rising term premium on ten year bonds:

“the entire reason why [ten year Treasury] rates have been going up since August is that the term premium is moving up, and it is now close to zero.”

The Christensen-Rudebusch estimates he bases this argument on only extends up to 1/4/2021, so we’ll have to wait to get a look at what portion of the post-Georgia steepening — which is qualitatively different from the August-December steepening — is due to changes in the term premium.

Let me be more explicit about the cause of the steepening.

If the level of the long term bond is given by:

And the change in the 10yr-3mo spread, from one moment to another moment is:

The post Spreads and Risk over the Past Week (and Months) appeared first on Market World.

#2031 Solving the huge pain of haircuts

A Dying Teacher, Worrying Over Students to His Last Breaths