We love pie here in New England. Whether it’s wild Maine blueberry, apple with cheddar, or creamy pumpkin during the holiday season, the irresistible combination of golden, buttery pastry filled with sweet fruit or smooth custard is, for many, the perfect dessert. Love pie but hate to bake? Not to worry! Since 1924, Table Talk Pies in Worcester, Massachusetts has been supplying New England (and beyond) with a popular assortment of tasty pies in favorite flavors like blueberry, apple, lemon, chocolate eclair, pineapple, cherry, pumpkin, peach, banana creme, chocolate creme…and more. 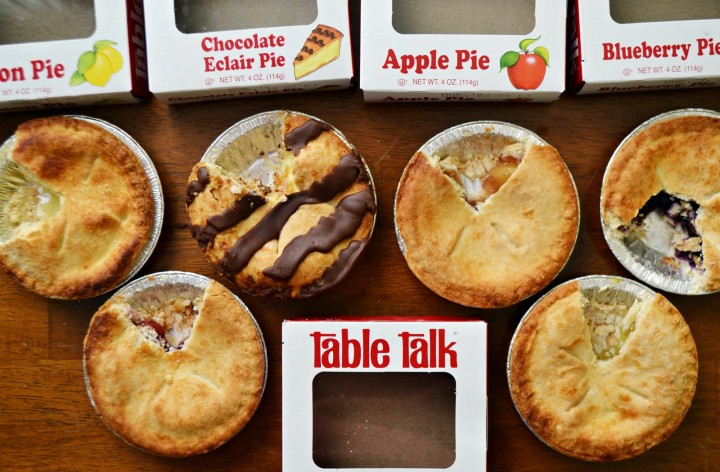 Instantly recognizable with its cheerful red and white packaging, Table Talk got its start selling to restaurants and hotels, but expanded to retail by the 1930s. Before the days of convenience store chains and fast food, they were a welcome sight at coffee shops and other small stores. Table Talk makes a standard 8-inch pie, but they’re most known for their 4-inch “snack pie” (seen in the photos throughout this post). The company says they bake over 80 million of the snack-sized pies each year! As for ingredients, they also say they’re proud to use “wild blueberries from Maine, Washington and New York Apples, Georgia peaches, pumpkins from the Amish farmlands of Pennsylvania, sweet potatoes grown in the rich soils of North and South Carolina and pecans from Texas and Louisiana.”

The little pies, I can attest, are the perfect size for warming up and topping with a scoop of ice cream, and if your favorite part of the pie is the crust, having a whole “mini pie” guarantees you’ll get some in every bite.

Today, the pies come in disposable foil plates, but before that, they (and all mass-produced pies) were baked and sold in aluminum pans. Table Talk aluminum pans, boasting the phrase “New England Flaky Crust Pie – 10c Deposit,” have since become an easy and affordable collector’s item. Other pie brands, like Py-O-My and Bluebird, are also vintage favorites.

Another New England pie company, the Frisbie Pie Co. (owned by Table Talk since 1958), also conjures up fond memories for many New Englanders. Founded in 1871 in Bridgeport, CT, Frisbie is most famous for being credited with providing the original inspiration for the frisbee toy. Legend says that pie-loving students at Yale University used the empty  tins as flying discs on the New Haven Green. Noticing the growing fad, an inventor developed a plastic version, dubbed “the frisbee” in honor of Frisbie’s Pies.

But is the story true? Well, kind of. Frisbee inventor Walter “Fred” Morrison had never heard of Frisbie Pies or even visited Connecticut when he started selling flying discs on the west coast in the late 1930s, but after selling his design to toy developer Wham-O in 1957, the name was changed to Frisbee after the Frisbie pie tins. In short: Yale students with their Frisbie’s tins didn’t inspire the original invention, but without them there would be no Frisbee flying disc brand name. Not bad for a New England pie! 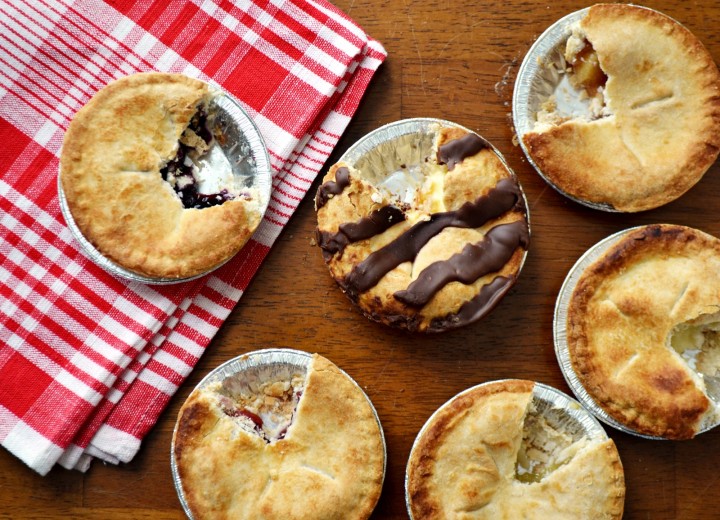 It was tough to track down much more than the basics in the Table Talk story, but I did stumble across a few fun facts online. According to one source, Table Talk used to buy the entire 400,000 ton annual crop of Prince Edward Island blueberries for their pies! It also claimed that every year on Washington’s birthday the company would make 16,000 cherry pies to be sold at Lechmere for 88 cents each. In keeping with the fondness for fun, Table Talk is now an enthusiastic participant in “Pi Day” celebrations that take place worldwide each March 14th (or 3.14).

Alright, pie-lovers…are you a fan of Table Talk pies? Which flavor is your favorite?

GUESS WHO: Did this director of a FLOP comedy film have a tiff with the producer after he refused to pay dues?

Protester's message for looters: Something is wrong with you

It's been five decades since 1968, and things are somehow worse