Deep-fried noodles, morsels of pork, and sautéed vegetables piled onto a hamburger bun and drenched in gravy. Above, the top bun perches just so. It’s a crunchy, sloppy stew that would be immensely difficult to eat with your hands despite what its name might suggest. This is the chow mein sandwich, a Massachusetts South Shore staple.

In 1882, it was the Lizzie Borden murders that made Fall River, Massachusetts, notorious. But in 2019 this former textile mill city was in the news for a different reason: CNN came knocking on the door of Mee Sum, a Fall River Chinese restaurant that’s been serving up chow mein sandwiches for more than 50 years.

This was not an isolated instance of news coverage: NPR has written about the chow mein sandwich, as has Vice. It’s been a focus of a Brown University anthropology dissertation. A band wrote a song about it. And celebrity chef and Fall River native Emeril Lagasse has even admitted a penchant for the dish.

Which begs the question: How did the least sandwich-like sandwich come to be Fall River’s culinary pièce de résistance? So I visited Fall River, Massachusetts, to find the answer and taste this curious classic for myself. 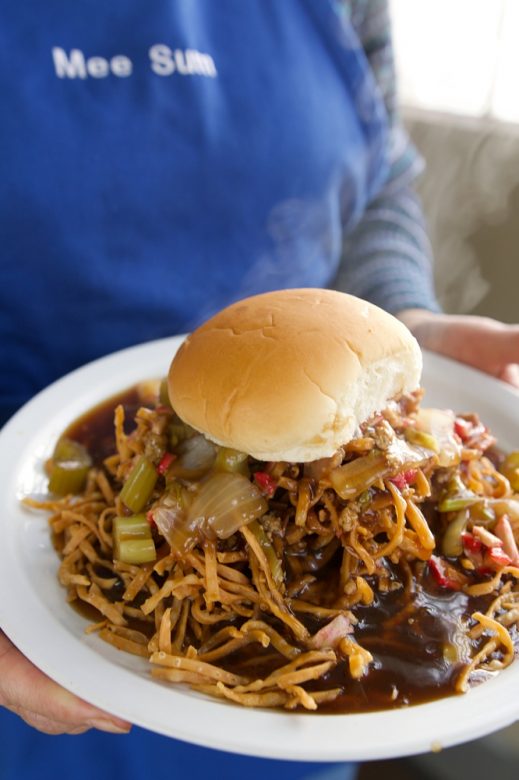 The chow mein sandwich, in all its glory.

Over the years, we’ve written about a lot of odd New England sandwiches, but perhaps the most idiosyncratic of them all is the chow mein sandwich.

The pork may be swapped out for chicken, beef, or shrimp. Those who don’t want vegetables — or, alternatively, meat — can order a “strained” chow mein sandwich (not to be confused with the chop suey sandwich, a Salem, Massachusetts, specialty consisting of a pile of meat and vegetables, with extra emphasis on bean sprouts, on a hamburger bun).

Now, the elephant in the room. It’s called a sandwich but it really can’t be eaten like one, at least not in any sophisticated way. Why is the bun even there?

The Invention of the Chow Mein Sandwich

Beginning in the 19th century and continuing into the early 20th, Fall River, Massachusetts, was a cornerstone of the country’s textile industry. During this era, Chinese immigrants began arriving in town, driven out of the West Coast by the hostility surrounding the Chinese Exclusion Act of 1882.

Many of these Fall River newcomers opened restaurants, and since the town was largely made up of European immigrant factory workers at that time, the Chinese restaurateurs had to adapt their menus, explains WCAI reporter Sarah Mizes-Tan in her recent public radio piece. As Imogene Lim, a food historian and anthropology professor who researched the chow mein sandwich as part of her dissertation, tells Mizes-Tan: “If you’re thinking, [European] immigrant groups, what do they know about Chinese food? But they know something called a sandwich. So a sandwich becomes something accessible to them as a way to ease in that notion of Chinese cuisine.”

The chow mein sandwich peaked in the mid-20th century, according to Lim, who says that “portability and inexpensive price were factors in its popularity. This was during a time before there were McDonald’s, Burger King, and every other kind of fast-food establishment. For a mere five cents (the original cost), you would be waited on and served in a booth!” 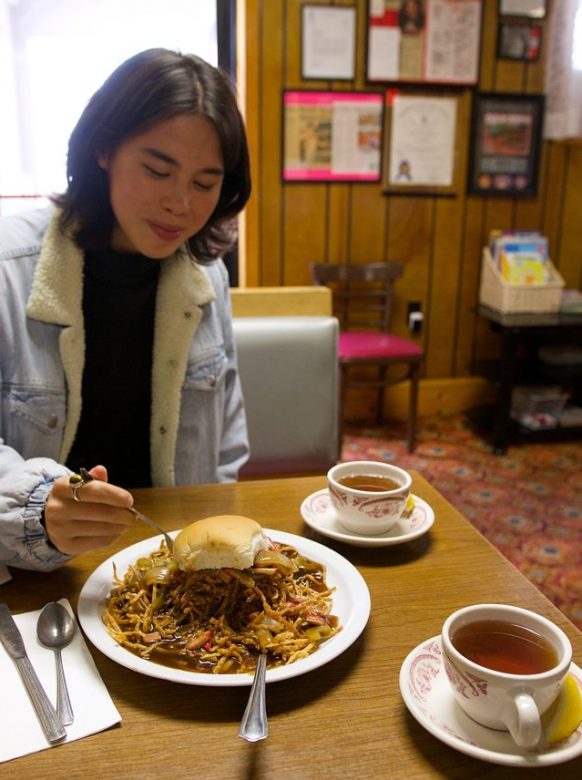 Despite its name, the chow mein sandwich is not a handheld meal.

The blustery November weather seemed distant as I sipped tea in a gray cushioned booth at Mee Sum Restaurant on a recent afternoon. Flipping to the back of the menu, I scanned for a moment, and then my eyes locked on it: chow mein sandwich, $4.25.

My order arrived within minutes. The mountainous sandwich covered the plate, steam pouring out from beneath its plump hamburger bun “hat.” As I ate (with a fork!), co-owner Regina Mark told the origin story of Mee Sum’s chow mein sandwich.

Mark said the restaurant’s crispy chow mein used to be served with a side of bread so that customers could soak up excess gravy. One day, they ran out of bread and substituted hamburger buns instead — and the practice stuck.

Nowadays, customers travel from far and wide for chow mein sandwiches at Mee Sum. When CNN announced it would be visiting, Mark decided to turn the event into a community celebration of this treasured local cuisine. On that day, the restaurant served nothing but chow mein sandwiches.

“By 6:30 we sold out everything,” says Mark, who — as noted in local news coverage — seemed entirely unfazed by the fact she had broken her wrist a few weeks earlier. That day, Mee Sum served more than 1,500 chow mein sandwiches.

“Even the CNN staff chipped in to help. They were here all day,” says Mark. “It was such a wonderful feeling.” 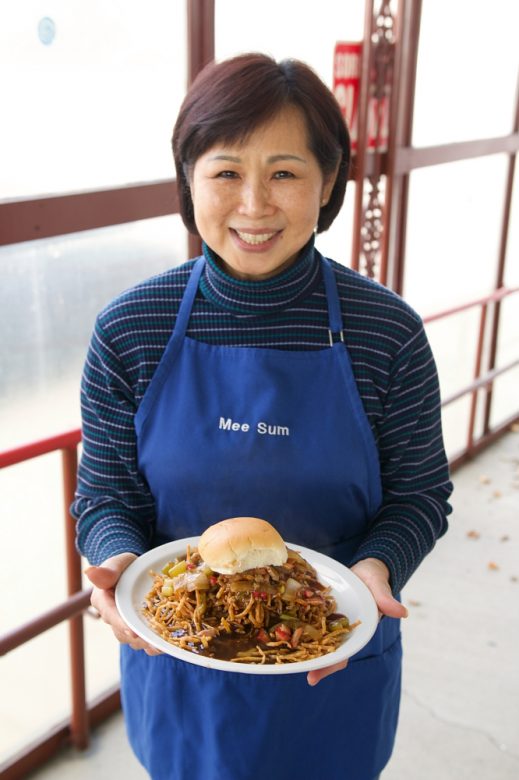 How to Make a Chow Mein Sandwich

For those looking to enjoy a chow mein sandwich at home, the original Hoo-Mee fried chow mein noodles can be purchased online or in many southeastern New England supermarkets. The key to this dish is using deep-fried noodles, which, when drizzled with gravy, begin to soften while still retaining bits of crunch. The gravy also can be made at home using Emeril Lagasse’s recipe or by purchasing this mix.

Is the chow mein sandwich for everyone? Maybe not. But does this sandwich and the story of its creation have a place in our hearts? Absolutely.

Have you ever had a chow mein sandwich?

SEE MORE:
Ode to the Baked Bean Sandwich
Did Lizzie Borden Really Take an Ax and Give Her Mother 40 Whacks?
Five Fun Things to Add to a Fluffernutter Sandwich

The bubonic plague is back again in China's Inner Mongolia