Duncan Weldon made a good point recently when he tweeted that the “disconnect between British political discourse and opinion of mainstream economic opinion feels extreme.”

Whilst political discourse talks of balancing the government’s books, most economists (outside the IFS) point to negative borrowing costs and think it more important to look after the economy. Instead, whether left or right, we have other priorities: how might monetary policy better support the economy? How can we end the long stagnation in productivity? Why are house prices so high and what can we do about them? How can we best fight climate change? How might tax or planning policy better promote longer-term growth? How strong is the case for a national wealth fund, basic income or jobs guarantee? How should banks be regulated? Does inequality reduce growth and if so what can be done about it? Etc, etc.

These questions, though, are not reflected in Westminster politics. It’s as if economics doesn’t matter.

From one perspective, this is weird. Historically, politics has been dominated by economic issues: free trade vs protectionism in the early 20th century; whether to be on the gold standard or not; how to achieve full employment; whether to nationalize or privatize; how much planning; how to control inflation; what to do about productivity; and so on. The low salience of serious economics is unusual in a historic context therefore.

What’s more, twelve years of flatlining real wages should have pushed economics up the agenda. We can afford to ignore the economy when it’s working well, but not when it isn’t.

Which poses the question. Why is there the disconnect Duncan notes? Here are some (non-exclusive possibilities):

– The transmission mechanism from academic economics to policy is broken. This is partly a supply-side problem. Academics are more concerned with bureaucracy and writing unreadable, unread and unreplicable journal articles than they are with communicating good ideas to the public. And even if they were interested, they’d be ignored by the media.

– The rise of retail politics. Politicians – with a few exceptions – aren’t much interested in ideas. They need salesmen, not economists (or sociologists or philosophers for that matter). Who needs intellectuals when you have focus groups?

– Interests. Economic ideas gain political prominence if they promote, or at least don’t retard, the interests of powerful groups. Post-war full employment was feasible in part because Fordist capital needed mass markets of affluent workers. When, however, those affluent workers squeezed profits in the 70s, union-bashing became acceptable. So too did freer markets and lower taxes. Today, though, good economic ideas attack powerful interests. Landlords don’t want a land value tax. Bankers (or at least their bosses if not shareholders) don’t want higher capital requirements. And so on. It’s hard to imagine sensible economic policies which do not attack the interests of landlords or bankers. Sure, there’s still a section of capital whose interests are consonant with growth-promoting policies. But the message of Brexit is that this section is politically weak.

– Realignment. There’s a widespread view, shared by the Labour party, Matthew Goodwin and Stephen Davies in his book, The Politics and Economics of Brexit, that we’ve seen a realignment of politics. The great divide is no longer about economics but culture: “somewhere” vs nowhere”, cosmopolitans vs nationalists”. Brexit might be the start of this new alignment not the end. If so, economics matters less for politics than it used to. 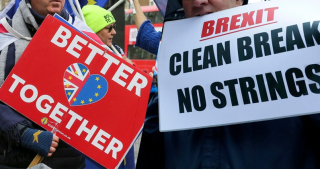 Which brings me to my beef. Isn’t it remarkable that, of all the times this realignment might have happened, it just happens to have come after years of capitalist stagnation?

Well, not so remarkable. It corroborates the finding made by Ben Friedman in 2006, that hard economic times breed nationalism and intolerance. Many of those who remark upon the new realignment are guilty of a gross incuriosity: the fail to ask: might political preferences be endogenous, the result of socio-economic trends?

Herein lies a massive difference between now and the 70s. Back then, the Tories reacted to economic crisis by developing a new economic agenda. Thatcher could plausibly tell a lot of people: “vote Tory and you’ll get richer”. Enough, anyway, to win general elections. Her epigones, however, cannot do this. They have no ideas for economic regeneration – though whether this is because of their own intellectual shortcomings or economic reality is an open question. Instead, all they have is the fanning of the flames of nationalism. There’s more than one way to achieve hegemony.

The post The economics-politics divide appeared first on Market World.

Burnett: Here is what keeps Trump up at night