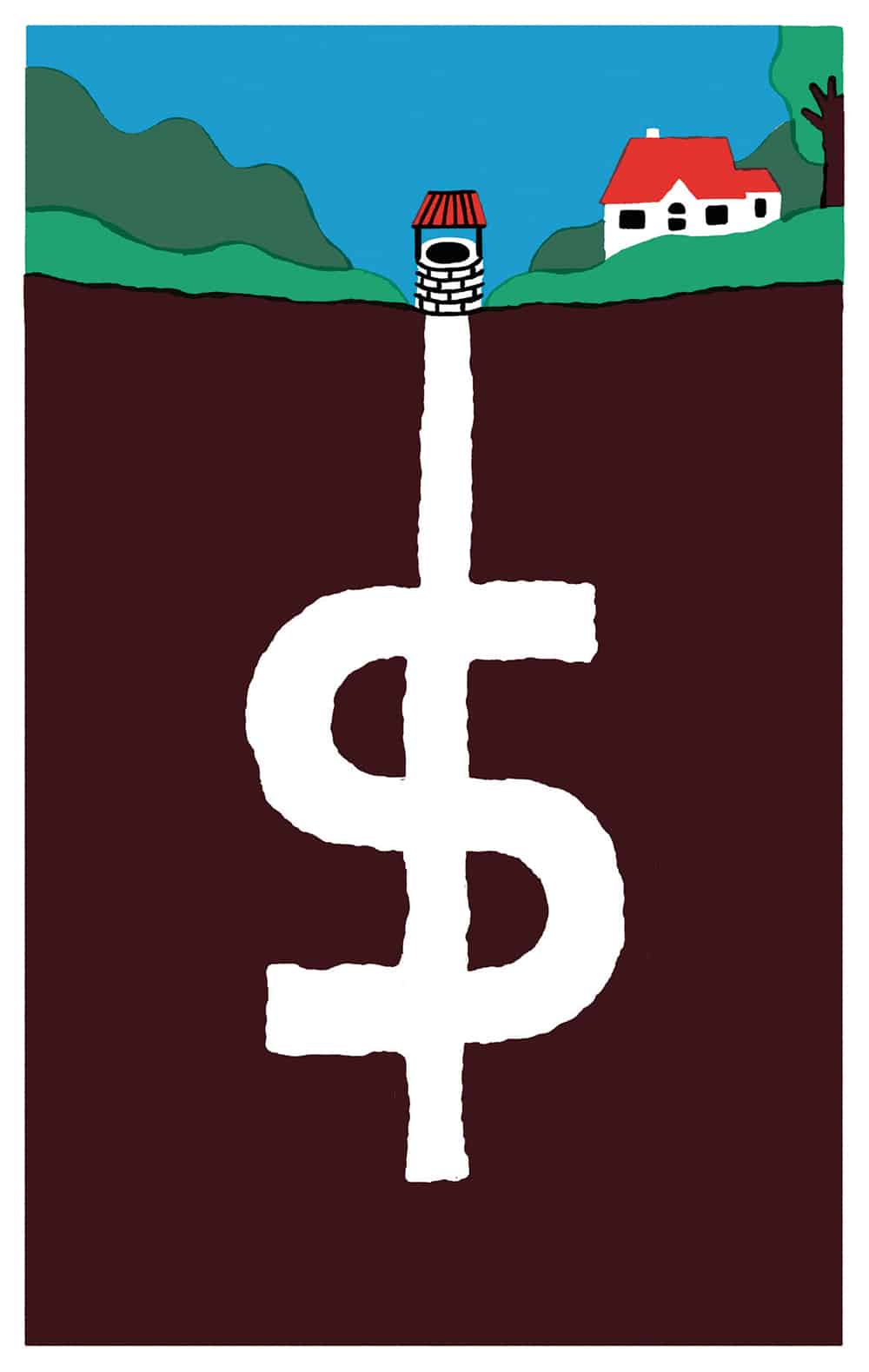 Of the myriad tasks needing completion before the rental house we built is suitable for occupancy, none has provoked quite so much anxiety as drilling the well. I was keen to get it done, if for no other reason that I’d finally be able to stop obsessing over how deep we’ll need to drill.

This, of course, correlated directly with how much we would need to spend. I had budgeted $8,000, but truthfully that’s just an extrapolation of the lowest realistic estimate I could justify, which was $5,000. My logic went something like this: If I added 60 percent to the most optimistic but still-realistic scenario (i.e., anything less than $5,000, while theoretically possible, is pretty much pie-in-the-sky thinking when it comes to the well-drilling game), I left the door open to good fortune without tempting fate with unrealistic expectations.

To make budget, I decided to purchase a used submersible well pump. Since a high-quality pump can run upward of $1,000 new, I was particularly pleased with myself when I found a little-used 1-horsepower Goulds (an industry standard-bearer) on Craigslist for $140. I drove an hour and a half to South Royalton, where I met a man named Justin in the dooryard of the small lumberyard he owned and operated. “If it doesn’t work for ya, I’ll give ya yer money back,” he told me, as I counted twenties into his outstretched hand. Though I generally subscribe to “buyer beware” when purchasing used items for a fraction of their original price, this immediately endeared me to Justin.

Soon after the pump was purchased, we drilled the well and struck a rich vein of water at 205 feet—a depth that put us within sight of my most optimistic financial scenarios, assuming the used pump performed as expected. With the well installed and the pump in hand, I called my friend Paul, who is one of those rural bachelor jack-of-all-trades-master-of-many types and my go-to whenever I want a plumbing job done right (when I want it done wrong, I just do it myself). And so it was Paul who first noticed that my new-to-me pump was missing its motor lead, a small but essential part that connects the pump wire to the pump motor.

No problem, I thought. Surely my local Goulds dealer would have the part in stock or, worst-case scenario, be able to order directly from Goulds. Either way we’d be up and running in no time. In fact, the part was not in stock, and an order was placed with a promise of three-day delivery. This was fine with me, as Paul was not available to help until the following week anyway. No harm, no foul, and the part was inexpensive enough that I could still feel pretty savvy about the whole deal.

The day before Paul was due to arrive, the part came in. But after driving over the mountain to collect it, I found that the new motor lead didn’t fit—and the correct part was back-ordered for six weeks. Suddenly, my savvy purchase was beginning to look like yet another in a long line of well-intentioned but ultimately counter-productive attempts to save money.

“You know,” said the fellow who was helping me try to track down the correct part, “you should stop at the well-drilling place in town. They might have something lying around.” It was a bit of a Hail Mary, he and I agreed. For one, it was nearly 5 p.m. and thus, quitting time. For another, he was talking about the shop out of which the driller operated; the chances of someone even being around were slim. Finally, could they possibly have the correct motor lead on hand and, if so, be willing to take the time to dig it out for a hapless homeowner such as myself? They were in the business of drilling wells and dropping pumps, not supplying parts to people so they could do the work themselves. But really, what else was I going to do?

I pulled into the driller’s yard at nearly half past 5 and was pleased to see that the shop’s bay door was open. I could see two men inside; they were leaning on a workbench, though I couldn’t tell if they were actually working on something or simply using the bench to take a load off after a long day of toil. By the time I’d disembarked from my truck and made my way to the maw of the doorway, I could see the beer cans clutched in their hands. There was a 12-pack—or what remained of it, anyway—atop the workbench. Coors Light.

I explained my predicament, and the men asked to see the pump. Then they led me behind the shop to what they called “the graveyard.” There, half-hidden in the weeds, lay an impressive pile of burned-out or simply deemed-unfit-for-service well pumps. I’d say there were three dozen, but that’s really just a guess. It could have been half that many; it could have been twice that many.

It took us less than two minutes to locate a pump with the correct motor lead, and maybe another three or four to carry it into the shop, lay it on the workbench next to the 12-pack, and remove the lead. Perhaps it would have gone even quicker if there weren’t so many empty beer cans lying about, but I was in no position to complain, and besides, it might be argued that my unlikely saviors’ semi-inebriated state is precisely what had disposed them toward being so helpful. We put the new-used lead on my pump, where it fit perfectly, as if it’d never been missing at all.

With my pump complete, I had no reason to stay, but the men and I had gotten to talking—about drilling wells, about building houses, about growing up in Vermont—and despite having a long list of chores that needed completion before my day was done, I lingered. The interior of the shop was shaded and cool and smelled of all things a shop should smell of, which is to say it smelled of grease, metal, and rubber. While I’ve never worked in a shop or a garage, I’ve spent enough time in them to know the comfort of those smells, which to me are the smells of things getting fixed. Of course, they’re also the smells of things that can’t be fixed, but on this afternoon, I had my newly repaired pump in hand, and on the eve of my date with Paul, no less, and it hadn’t cost me a thing (the men had refused payment), and I was back to being a savvy consumer. All of this imbued me with a profound sense of optimism, possibility, and gratitude.

Eventually, I thanked the men once again, bade them farewell, climbed into my truck, and headed for home. The next day, if all went according to plan, I’d take my first drink from the new well, of cool water drawn from deep underground, pushed upward by the very implement that now lay across the passenger seat. It seemed to me a little miraculous that this humble pump could make it all possible. But it could. And it did. And the water is delicious.

The post The Fix | Life in the Kingdom appeared first on New England Today.