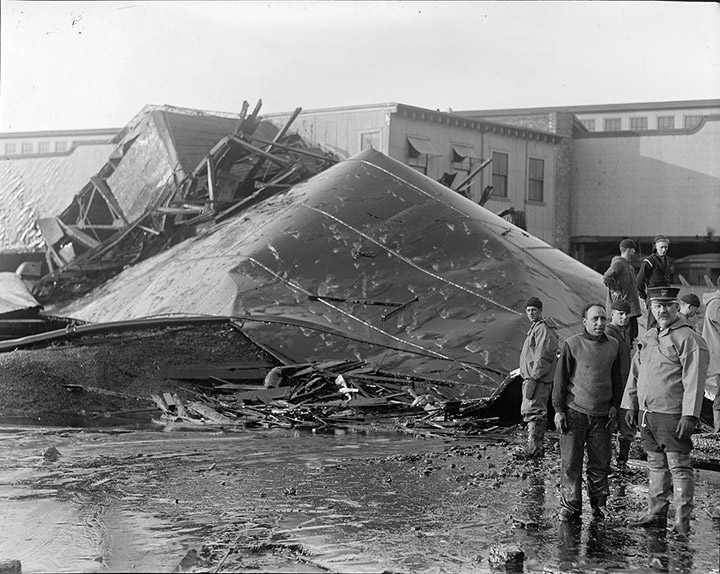 In January of 1919 Purity Distilling Company of Boston, maker of high-grade rum, was working three shifts a day in a vain attempt to outrun national Prohibition. The company’s huge iron tank along the water’s edge at 529 Commercial Street in the North End was filled with more than two million gallons of molasses. Pipes entering the tank were heated to aid the flow of the dense liquid. A solitary vent was the only outlet for the fermenting gases.

It was just after noon on January 15 when the great molasses tank exploded with a ground-shaking blast. Those nearby who survived the ensuing catastrophe reported strange noises coming from the tank just before it let go. “It was like someone was on the inside hammering to get out,” said one witness.

A massive tidal wave of molasses swept across Commercial Street, smashing into a house at 6 Copps Hill Terrace, demolishing the building and killing Mrs. Bridget Clougherty. The metal latticework of the Boston Elevated Railway Company’s Altlantic Avenue line, running above Commercial Street, was struck by a large chunk of the shattered tank. A section of the El collapsed. A quick-thinking motorman, seeing the rail disappear ahead of the train, dashed to the rear car and, with the steel wheels spinning, managed to get it headed in the opposite direction. 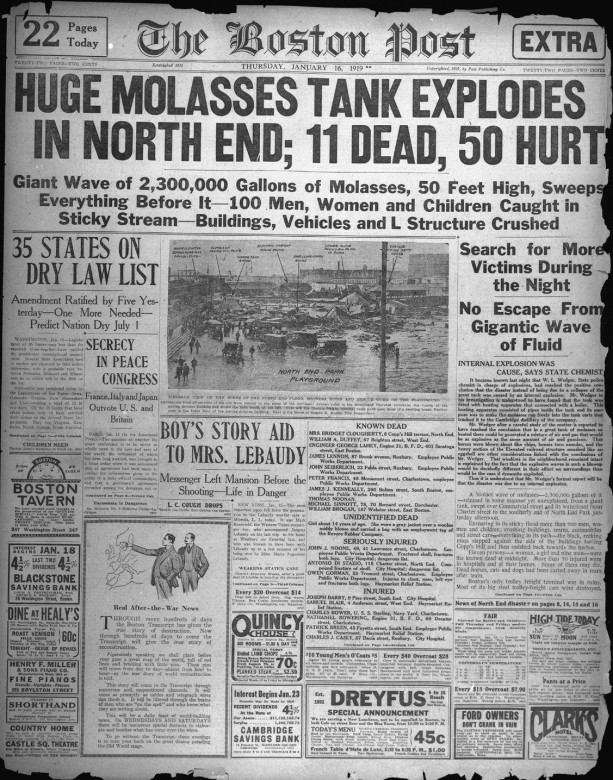 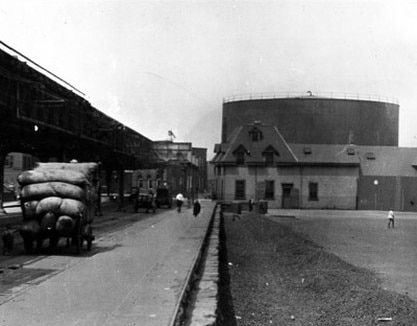 A “before” shot of the molasses tank in an undated photo. 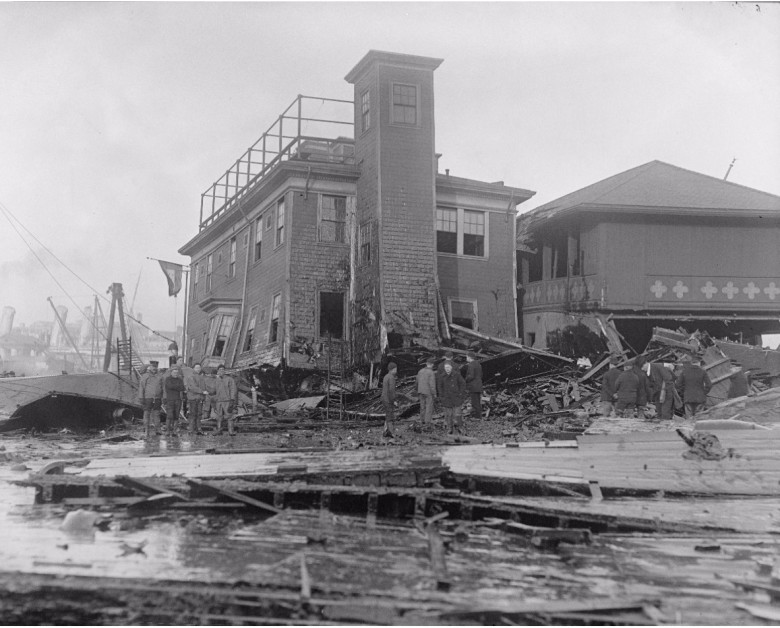 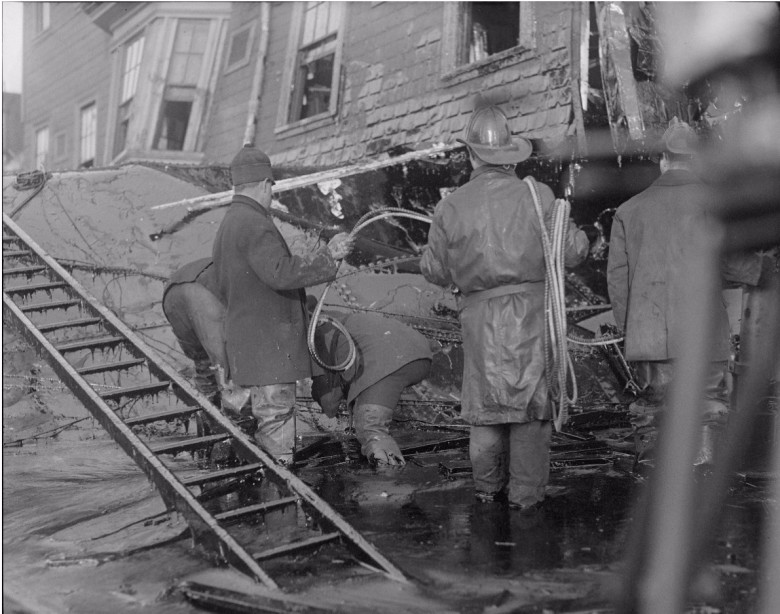 Firemen standing in thick molasses after the disaster.

The Bay State Street Railway freight depot and several motorized boxcars were destroyed. On the waterfront, Boston Fireboat #31 was sunk at its dock with loss of life. A five-ton Mack truck was picked up by the wave of molasses and slammed into a building. The city paving department office and stable were erased within seconds, killing five men and a number of horses. Scores of buildings, vehicles and bystanders were swept away. In all, 11 people were killed and more than 50 injured by the initial explosion.

A playground and baseball field presently occupy the site of the blast. Local residents claim that on a steamy summer night you can still smell the sweet aroma of molasses. 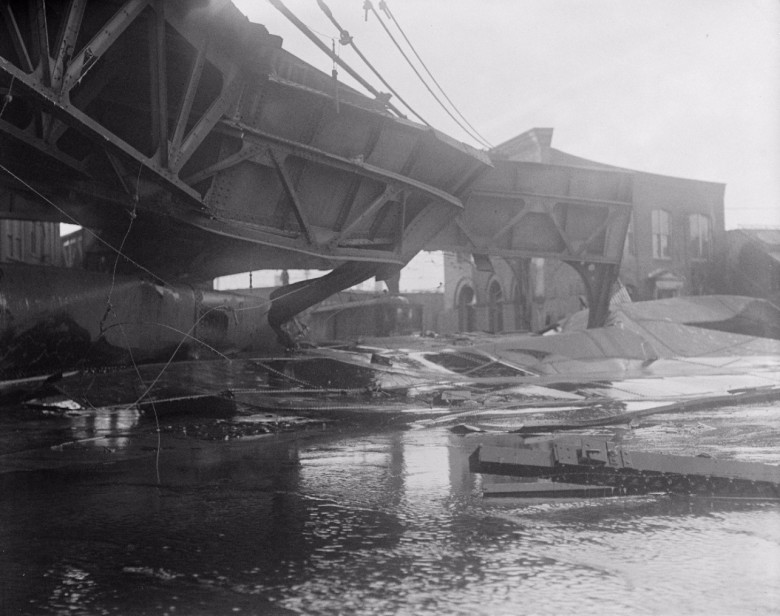 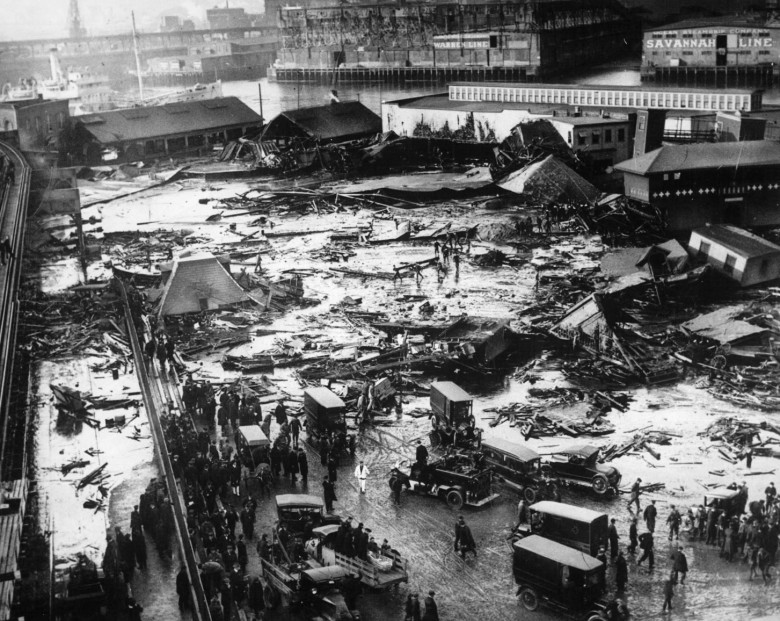 The brutal aftermath. Wreckage of the collapsed molasses tank is visible in the background, center, next to light colored warehouse.

Gallons of molasses that flooded the North End on January 15, 1919: 2.3 million
Estimated height of the wave of molasses: 30 feet
Estimated speed of the wave of molasses: 25 miles per hour
Number of people who died of drowning or suffocation in the molasses flood: 21
Number of people injured: 150
Sum that the Purity Distilling Company paid in damages to the 125 people who filed suit: Over $1 million
Length of time that Boston Harbor ran brown with molasses: Six months

Excerpts from “How Slow is Molasses in January?,” Yankee Magazine, January 1989 and 1994. The title was so spot-on, we’ve used it (at least) twice, and probably will again.