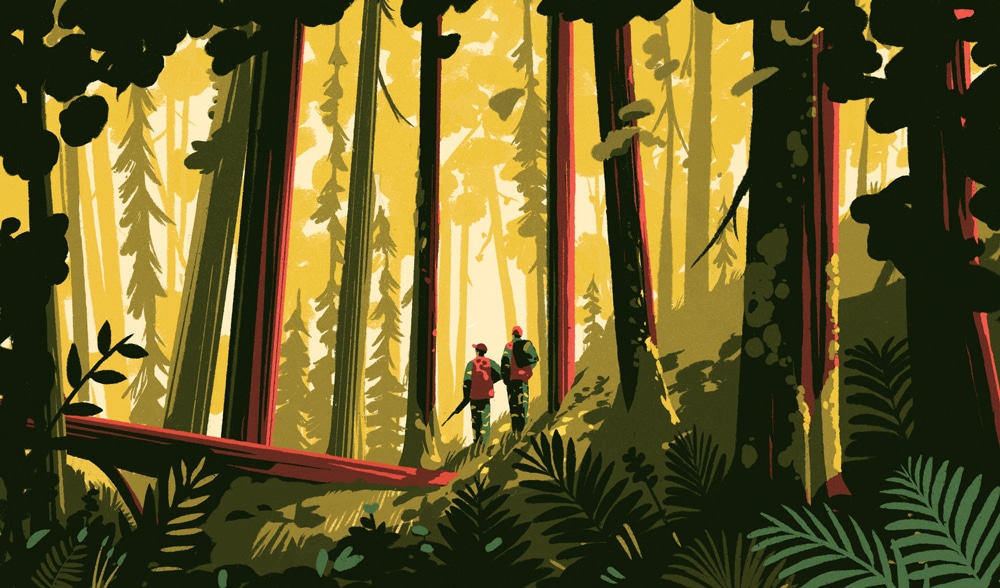 My son Rye has procured a moose permit. This is a very big deal, since the Vermont Fish and Wildlife Department does not allocate many moose permits. Because the moose population fares better when it’s at a moderate level of density, the state helps manage the population through hunting. As it attempts to optimize herd health—which has been profoundly impacted in recent years by a scourge of winter ticks—the state can change the number of permits it issues from year to year (last year there was no moose season at all). This year, it awarded 55 permits by random lottery among the more than 4,300 applicants.

All of which is to say that being a 15-year-old in possession of a moose permit in Vermont is a stroke of almost incalculable good fortune, and my son knows it. It’s been weeks since he was notified of his permit, and it still seems as if he can’t quite believe it. “I’ll never have this opportunity again,” he keeps saying.

Early on a Thursday morning in mid-September, he and I leave in the truck to scout the vast stretch of wilderness that’s been assigned to him (moose permits are distributed across specified hunting districts). It’s still more than a month until the six-day season begins, but he’s leaving as little to chance as possible. Already, there have been numerous trips to the gun range to hone his distance shooting. Specific ammunition has been purchased at more than $2 per round. He cleans his gun over and over again, and on many evenings, our house is infused with the acrid odor of gun oil. He burns his cleaning cloths in the wood stove, and the flames leap from the high-octane fuel.

We park at a pullout and head down a worn trail that becomes a narrow footpath, and soon after, a faint suggestion of a possible direction. The forest is lush and almost medieval-looking, the ground covered in a soft carpet of moss, the light filtered through a dense canopy of conifer branches. We see moose sign—tracks, droppings, the clipped-off tops of balsam firs from browsing—but not as much as he’d seen the week before, when scouting with friends in another forest within the district. Still, he wants to have options; he wants to find the places the other hunters are unlikely to reach, either because they don’t know of them or because it’s too far to walk or too challenging to consider packing out an 800-pound kill.

I notice how quietly my son walks through the woods, and how noisy I am by comparison. I notice how he’s always scanning the terrain at the periphery of our vision, looking for things I don’t know to look for, and seeing things I don’t understand the meaning of. I notice that I can barely hold his pace; despite his seeing and noticing, he’s not here to immerse himself in nature, or to fully inhabit the moment, or for so many of the other reasons people come to the wild. He’s here with a purpose. He’s devising a plan, and like all plans that involve the taking of life, it is serious business, and it requires that we cover serious ground.

In so many regards, it’s all a mystery to me. I did not grow up hunting; my sons did not grow up with a father who took them hunting. Part of me regrets that I wasn’t able to offer them that, and part of me revels in the reversal of traditional roles: It’s my sons, and Rye in particular, who’ve taught me about hunting; about the animals, with their particular habits and habitats; about the guns and the gear, and how to prepare the less savory bits of the creatures they harvest. If my son kills a moose this fall, I know our entire family will be well nourished all winter, and every edible bit (including those that many wouldn’t consider edible) will be utilized.

I don’t hunt often, but I love to accompany my sons on scouting trips, or to serve as the licensed partner during youth weekends. Of course I’m glad for the time with my boys, but I’m also glad to know what it’s like to inhabit the landscape through the prism of pursuit, because even at my very pedestrian level of skill and commitment, I can feel how different it is from inhabiting it as a nonhunter. Everything seems enhanced, the colors brighter, the sounds clearer, the air cleaner. If there are other ways to achieve this state, I’ve not yet discovered them.

And it makes me happy to witness my sons navigate the world in ways of their own making, their own learning. Like many parents, I want a lot of things for my children, maybe more than is reasonable to expect. But of those things, I’ve wanted none more than for them to develop resourcefulness and a belief in their own capacities. To know that if there’s something they want to learn, or simply to do, it is within them to learn it or do it. Hunting is not how I expected they might develop this self-knowledge, and of the many ways I imagined us spending time together as they approached the cusp of adulthood, sighting in rifles and tracking moose were never under consideration. I wouldn’t have even known to consider them. But at the cusp of 50, I’m finally (finally!) awakening to the truth that what we expect and what we get are often two very different things, and that one of the greatest gifts we can give ourselves is to remain open to the unexpected.

Rye and I arrive at the edge of a large wetland fringed by cedars. It’s maybe half past 9; we stop to shed jackets and drink water. It’s a warm, dry morning at the end of a warm, dry summer. The surface of the wetlands’ mudded areas is crusted and cracked. There are tracks pressed into the mud, a few in the telltale cloven shape of moose, and many more in the delicate pattern of coyote. We push through swathes of chest-high brush so dense that I lose sight of Rye, though he’s only a dozen or so feet ahead of me. On the opposite side of the wetland, we find another Tolkien-esque stand of balsam fir. There is a game trail weaving through the trees, but what tracks we find are those of deer, not moose. We follow the trail, anyhow, unsure of where it will lead us, but also not needing to know.

The post The Lottery appeared first on New England Today.