Do you remember Josh, the lovesick moose of Carrara Mountain? He spent 76 days attempting to woo Jessica the cow back in 1986. 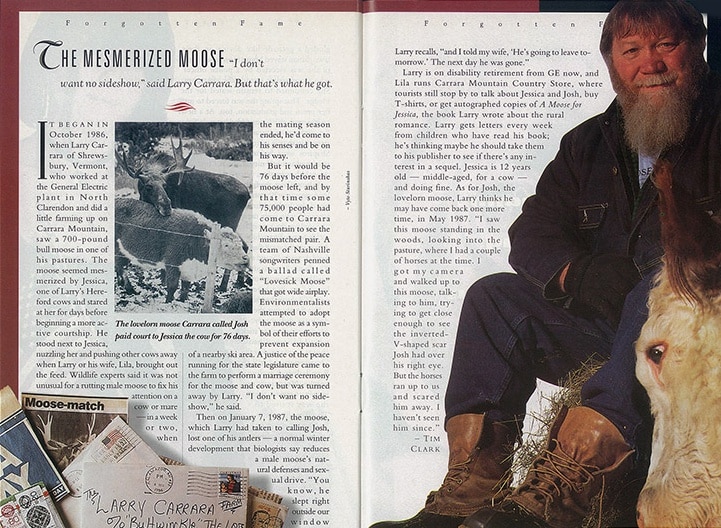 It began in October 1986, when Larry Carrara of Shrewsbury, Vermont, who worked at the General Electric Plant in North Clarendon and did a little farming up on Carrara Mountain, saw a 700-pound bull moose in one of his pastures. The moose seemed mesmerized by Jessica, one of Larry’s Hereford cows and stared at her for days before beginning a more active courtship. He stood next to Jessica, nuzzling her and pushing other cows away when Larry or his wife, Lila, brought out the feed. Wildlife experts said it was not unusual for a rutting moose to fix his attention on a cow or mare — in a week or two, when the mating season ended, he’d come to his senses and be on his way.

But it would be 76 days before the moose left, and by that time some 75,000 people had come to Carrara Mountain to see the mismatched pair. A team of Nashville songwriters penned a ballad called “Lovesick Moose” that got wide airplay. Environmentalists attempted to adopt the moose as a symbol of their efforts to prevent expansion of a nearby ski area. A justice of the peace running for state legislature came to the farm to perform a marriage ceremony for the moose and cow, but was turned away by Larry. “I don’t want no sideshow,” he said.

Then on January 7, 1987, the moose, which Larry had taken to calling Josh, lost one of his antlers — a normal winter development that biologists say reduces a male moose’s natural defenses and sexual drive. “You know, he slept right outside our window that night,” Larry recalls, “and I told my wife, ‘He’s going to leave tomorrow.’ The next day he was gone.”

Larry is on disability retirement from GE now, and Lila runs Carrara Mountain Country Store, where tourists still stop by to talk about Jessica and Josh, buy T-shirts, or get autographed copies of A Moose for Jessica, the book Larry wrote about the rural romance. Larry gets letters every week from children who have read his book; he’s thinking maybe he should take them to his publisher to see if there’s any interest in a sequel. Jessica is 12 years old — middle-aged for a cow — and doing fine. As for Josh, the lovelorn moose, Larry thinks he may have come back one more time, in May 1987. “I saw this moose standing in the woods, looking into the pasture, where I had a couple of horses at the time. I got my camera and walked up to this moose, talking to him, trying to get close enough to see the inverted-V-shaped scar Josh had over his right eye. But the horses ran up to us and scared him away. I haven’t seen him since.”

The Easiest Brown Bread in a Can Recipe

G20 agrees on final communique with reference to climate change