It wouldn’t be the holiday season without a few mishaps. Now a Yankee classic, this 1994 collection of reader-submitted Thanksgiving disasters (both funny and tragic) is one of our favorites. We hope you’ll share your own stories of Thanksgiving shame, horror, and hilarity in the comments below. It always helps to know you’re not alone when your cat takes a nap in the bowl of mashed potatoes. 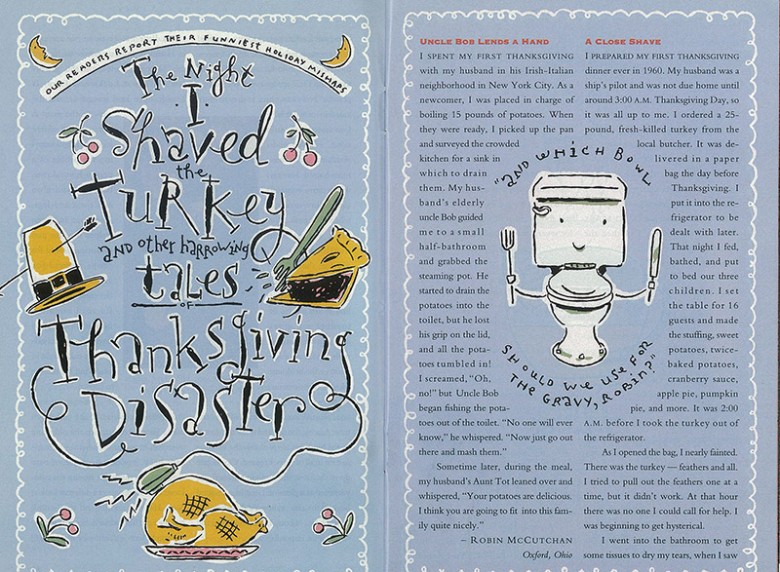 The Night I Shaved the Turkey and Other Harrowing Tales of Thanksgiving Disaster | Yankee Magazine, 1994

I spent my first Thanksgiving with my husband in his Irish-Italian neighborhood in New York City. As a newcomer, I was placed in charge of boiling 15 pounds of potatoes. When they were ready, I picked up the pan and surveyed the crowded kitchen for a sink in which to drain them. My husband’s elderly uncle Bob guided me to a small half-bathroom and grabbed the steaming pot. He started to drain the potatoes into the toilet, but he lost his grip on the lid and all the potatoes tumbled in! I screamed, “Oh no!” but Uncle Bob began fishing the potatoes out of the toilet. “No one will ever know,” he whispered. “Now just go out there and mash them.”

Sometime later, during the meal, my husband’s Aunt Tot leaned over and whispered, “Your potatoes are delicious. I think you are going to fit into this family quite nicely.”

I prepared my first Thanksgiving dinner ever in 1960. My husband was a ship’s pilot and was not due home until around 3:00 A.M. Thanksgiving Day, so I ordered a 25-pound, fresh-killed turkey from the local butcher. It was delivered in a paper bag the day before Thanksgiving. I put it in the refrigerator to be dealt with later. That night I fed, bathed, and put to bed our three children. I set the table for 16 guests and made the stuffing, sweet potatoes, twice-baked potatoes, cranberry sauce, apple pie, pumpkin pie, and more. It was 2:00 A.M. before I took the turkey out of the refrigerator.

As I opened the bag, I nearly fainted. There was the turkey — feathers and all. I tried to pull the feathers out, but it didn’t work. At that hour there was no one I could call for help. I was beginning to get hysterical.

I went into the bathroom to get some tissues to dry my tears when I saw the answer to my problem right on the bathroom counter. You can imagine my husband’s surprise an hour later, when he walked into the house and saw his very tired wife crying and shaving the turkey with his Norelco electric shaver!

P.S. It worked fine, and my husband is still using his electric shaver.

When the time came to serve Thanksgiving dinner, I mashed the potatoes and spooned them into a beautiful serving bowl. I turned away to get a carving knife for the turkey, and when I glanced back at the bowl of mashed potatoes, I was horrified to see Pepper the cat had decided it was the right place for a nap! Speechlessly I tugged on my wife’s shirt and nodded toward the bowl. Her eyes widened in disbelief, but we composed ourselves, shooed Pepper out of the bowl and scraped off the top layer of potatoes.

Mother-in-Law of the Year

I had my daughter, Sue, and her husband, Gary, to my house for Thanksgiving dinner, 1992. I had a ham baking in the oven and a turkey out in the garage, where I kept my electric roaster. When dinner was ready, I asked Gary to bring the turkey in to be carved. Soon after, we heard a terrible noise and a loud yell. Gary had lost control of the foil roasting pan, leaving turkey all over the car and garage floor. I was upset and so was Gary, but I tried to make light of the situation. “That’s one turkey we won’t have to pick meat off the bone,” I said.

P.S. Sorry I can’t type better. I slipped and fell in the garage, right where the turkey grease had been. I’ve never told Gary!

My girlfriend, brought up by her mother and live-in grandmother, never learned anything about cooking. But, with a cookbook and a lot of confidence, she decided to cook Thanksgiving dinner for the entire family. After reading the directions about cleaning and stuffing the bird, she went ahead and did so, then put it into the oven. After a few hours, she checked on the bird and found it foaming all over the oven. She had cleaned it with Ivory Soap.

When Ken and Lydia were given a turkey to raise for Thanksgiving, Lydia took on the responsibility with enthusiasm. She fed it, talked to it, and, far ahead of time, invited both sets of parents to the big dinner. As the days drew closer to the holiday, though, Lydia became more and more quiet. Finally, on the day before the big feast, Lydia burst into tears and told Ken, “I can’t do it.” Ken calmed her and promised to take care of everything. He went outside, and after a short while, returned with a limp turkey under his arm, trailing a whiff of chloroform. Putting the bird in the refrigerator, he suggested they go to bed and deal with dinner preparations in the morning.

The next day, Lydia woke early and went into the kitchen. She opened the refrigerator door and out flapped the turkey. Her screams brought Ken rushing down to find his wife on the floor in a dead faint and the turkey tottering unsteadily around the room. When Lydia revived, Ken had put the turkey out in the yard, where it lived out its life free from stress and fear of extinction. As for us, we decided to go out to eat. No one ordered turkey.

Excerpt from “The Night I Shaved the Turkey and Other Harrowing Tales of Thanksgiving Disaster,” Yankee Magazine, November 1994.

Do you have a Thanksgiving disaster story of your own? Share it in the comments!

The post The Night I Shaved the Turkey and Other Tales of Thanksgiving Disaster appeared first on New England Today.

The Basic Concept Behind Online Gambling