Brian Skerry has come home. Having traveled to the most remote oceans on earth during the three decades he’s spent working for National Geographic, the world’s foremost underwater photographer now finds himself exploring where destiny seems to have led: the frigid depths of his native New England sea.

Skerry grew up in the central Massachusetts town of Uxbridge dreaming of exploration and discovery and adventure. When his family went on beach outings in Rhode Island and New Hampshire, he always had “a yearning to know what was under those sea waves.” And he remembers as if it were yesterday being 15 and putting on scuba gear for the first time and sinking into the deep end of the backyard swimming pool—“I felt I was Cousteau himself.” Soon after, he attended the Boston Sea Rovers dive show, where he saw the work of under­water photographers. “I had an epiphany,” he says. “I knew I wanted to be an explorer with a camera. But I didn’t know how to do that. I didn’t have anyone to guide me. My parents were mill workers. Nobody in my town did that. It was a lofty dream.” 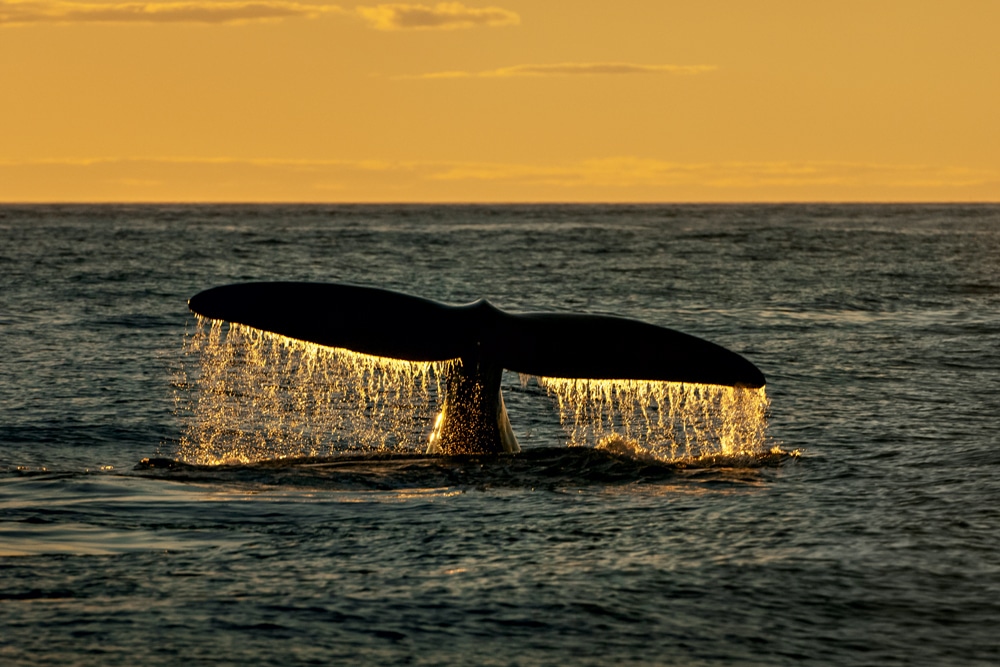 A North Atlantic right whale dives at sunset in the Bay of Fundy. These are the most endangered whales on earth, with fewer than 400 remaining amid threats from ship strikes and fishing gear entanglements.

Here’s how he made the dream happen: He attended Worcester State College, studying photography and film. He worked on boat charters that took divers to New England wrecks, where the often murky and turbulent water taught him what would work with lighting and, more important, what would not. He researched marine life incessantly and sold his photos to magazines and newspapers, each dive adding to his craft.

In 1998, National Geographic asked famed underwater photographer Bill Curtsinger to shoot the pirate ship Whydah, which sank off Cape Cod in 1717 and whose cargo of treasure was being recovered. He declined, and asked his friend Skerry if he wanted to put in his name. Curtsinger cautioned that visibility was terrible, the ship was covered in sand, and National Geographic editors gave only one chance to newcomers. But Skerry knew his way around wrecks—and his work on the Whydah has since led to nearly 30 major National Geographic magazine features, documentary films, and books such as Ocean Soul.

At first Skerry sought adventure, to be part of a mysterious, “indescribable” world unknown to most people, and to capture its breathtaking beauty. But as he witnessed firsthand the effects of climate change and overfishing and saw the lack of urgency to address them, his mission evolved. “I see the ocean dying a death of a thousand cuts,” he says. “I read a scientific paper that said 90 percent of all big fish have been taken. Coral reefs are dead or dying. I was in a unique position to reach millions of readers to give context to what the science was talking about.

“I don’t want to be the baron of doom. But you want people to care. To fall in love with these animals. To understand that every breath we take is connected to the ocean.” 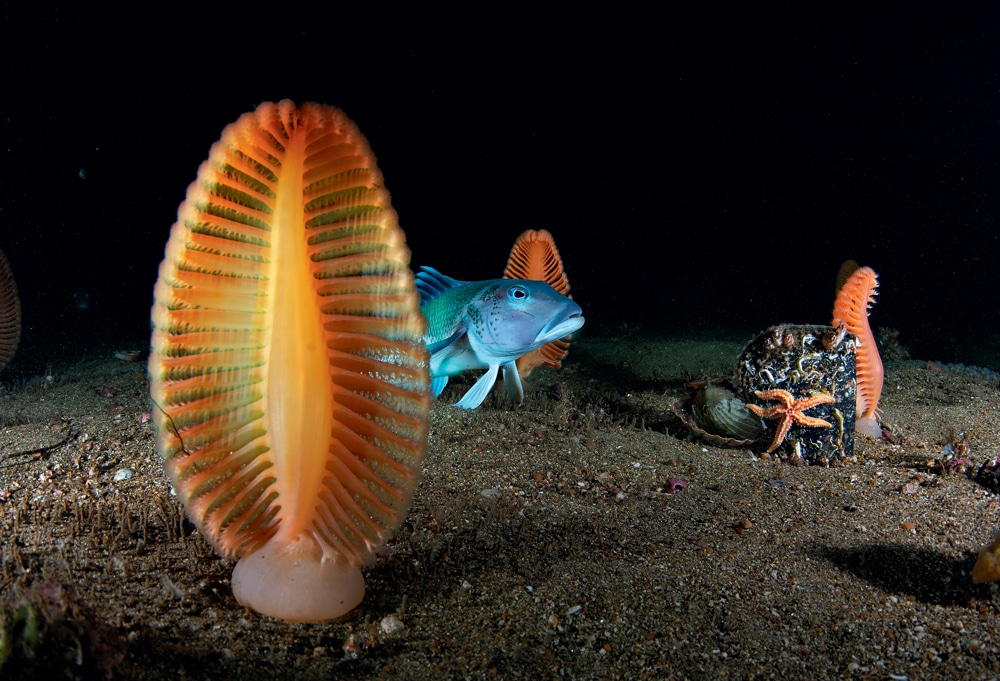 Which brings us to today, and to southern Maine, where Skerry, at age 59, lives with his wife and two daughters. Now much of his work will focus on the Gulf of Maine—going on dives off the Isles of Shoals or near Nubble Light, or making expeditions 90 miles off the coast to the little-known world of Cashes Ledge. His voice is resonant with awe when he describes what he finds there: “You see this massive kelp forest. It’s amber and crimson and burgundy, and there are codfish and lobster and pollack, and on the bottom, millions of blue mussels. It is spectacular. This could still be the future. This is one holdout, one little remnant of what it used to look like here.

“We live on a water planet and we have inflicted great harm,” Skerry adds. “I like to think it’s not too late, that with good science and storytelling we can reverse the tide and help save the future. I know we are not going to reach everybody. But if enough of us are beating the drum, it can come together. That’s my hope.”

To see additional photographs by Brian Skerry, go to brianskerry.com. There, you’ll also find information about his four-part Nat Geo television series “Secrets of the Whales,” which is set to debut on Earth Day, April 22, as well as his brand-new book of the same name. 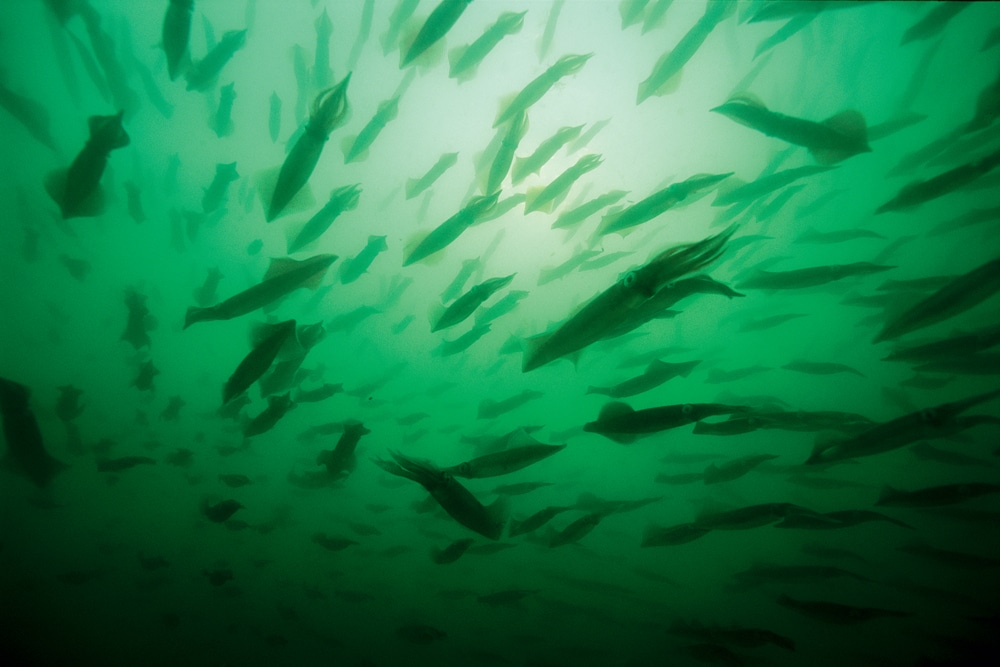 Although Skerry has photographed in oceans around the world, New England’s waters hold a special place in his heart. “To make a perfect picture in my backyard is a quest for me that rivals or exceeds anything else I have ever done,” he says. “These waters soothe my soul, and I want others to benefit from that.” Increasingly now, he’ll be working in the Gulf of Maine, which stretches from Cape Cod to Atlantic Canada. One focus: the marine life in Cashes Ledge, a 22-mile-long underwater mountain range that is home to the largest and longest contiguous kelp forest in the North Atlantic. “It’s unlike anything I have ever seen in New England,” he says. And since the Gulf of Maine is warming faster than any other ocean, there is a real urgency to the project. “This is a place that is suffering greatly now. If I can bring the spotlight to that, to celebrate the things that are still here, and show how it’s changing and to look at solutions, then I will have done something good.” 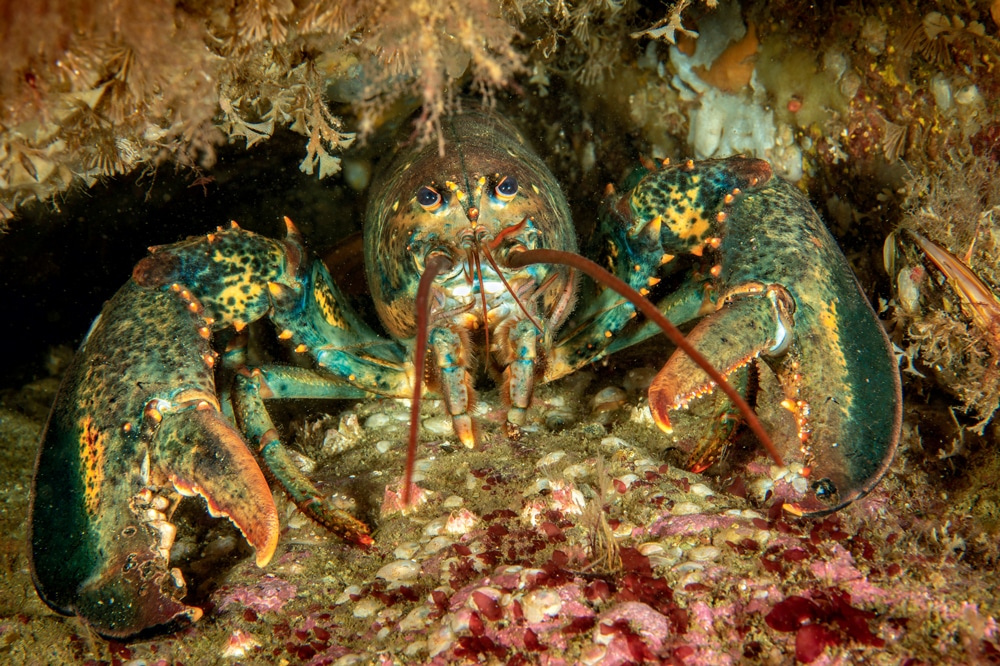 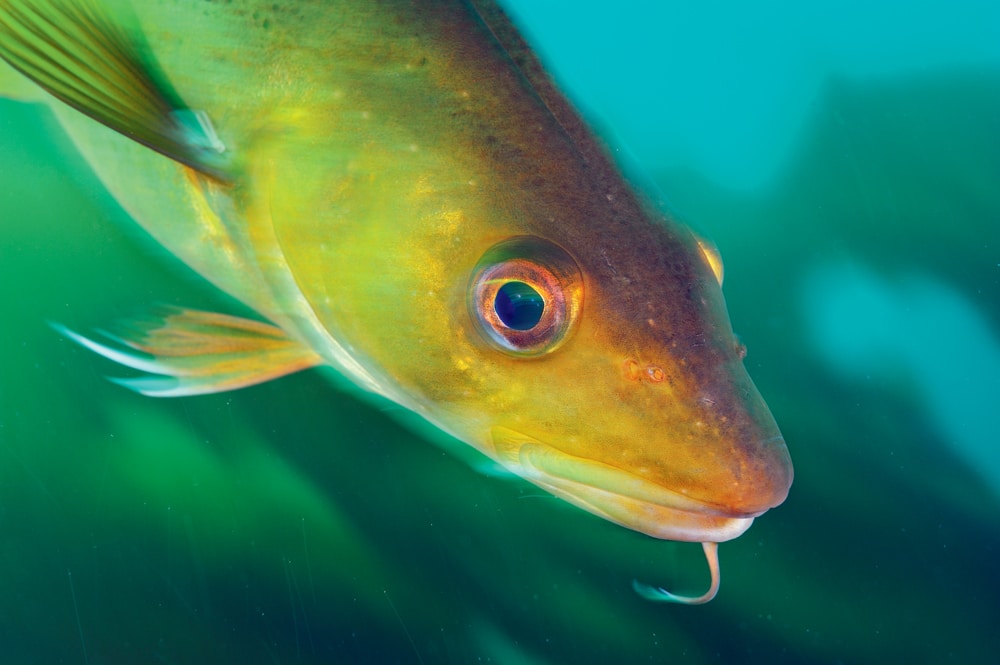 Red cod amid the kelp forest of Cashes Ledge, Gulf of Maine. 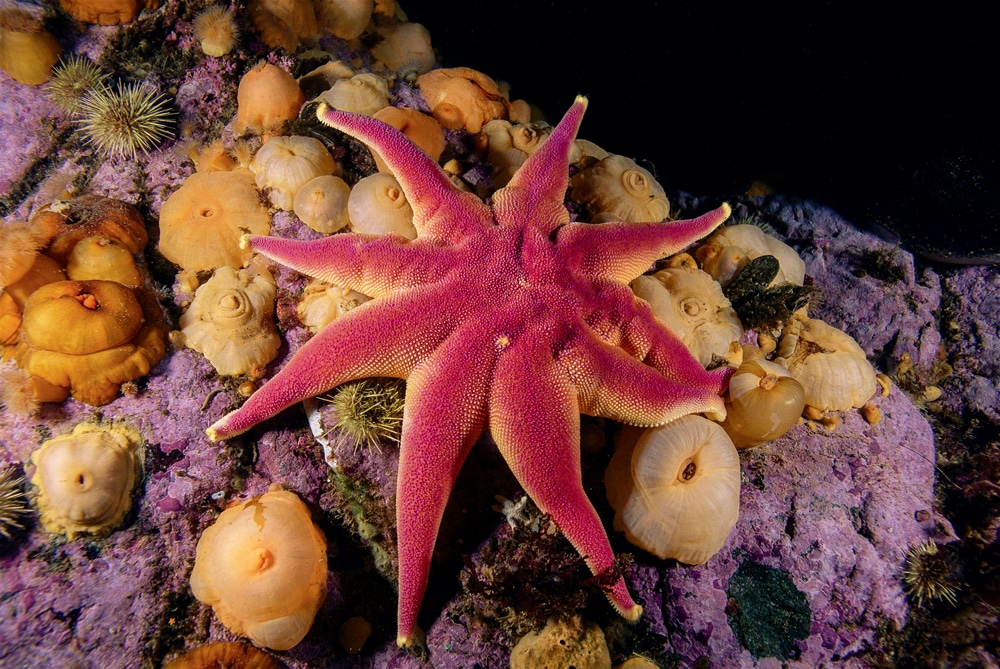 While Skerry has photographed many sharks during his career, it was a blue shark (like the one shown below) that provided him with his most memorable encounter. As he told Scuba Diving Magazine: “We were inside a cage for hours, with no sightings. Late in the afternoon, a female blue came along and I was so excited I thought I might explode. Without really thinking, I opened the cage door and swam out … back then, no one was going outside the cage. I vividly remember them telling me [afterward] I was crazy. I swam towards the shark as she nosed her way through the slick, looking for morsels of chum. I made a few frames before she swam away. To this day, I can remember that feeling of elation. For days I was walking on air recalling this special experience; it was like I knew a secret that no one else knew. I was instantly addicted.” 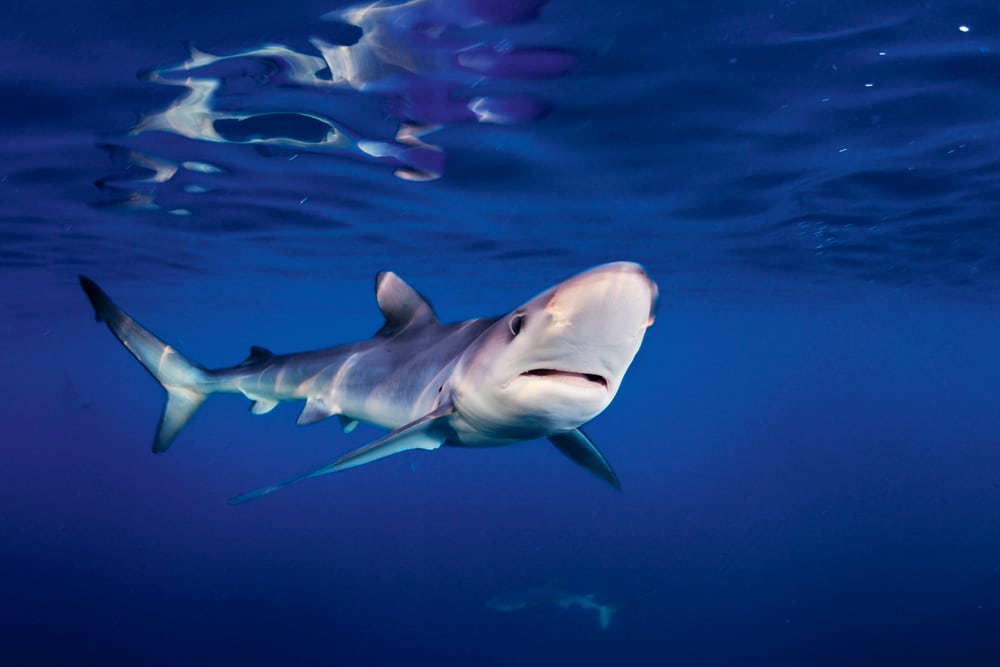 Skerry once dove off the coast of Acadia National Park for three days straight, letting the gray seals there grow accustomed to his presence. On the last day, just before he surfaced, “a seal approached me like a family dog inching closer to be petted … [then] stopped and allowed his body to float slowly upward into a vertical position. The seal’s flippers were perfectly crossed as if he were posing for his picture, and then he swam away.” Skerry says he thinks of his career as “a long string of extraordinary encounters with wildlife—and the more you have, the more you want to have.” 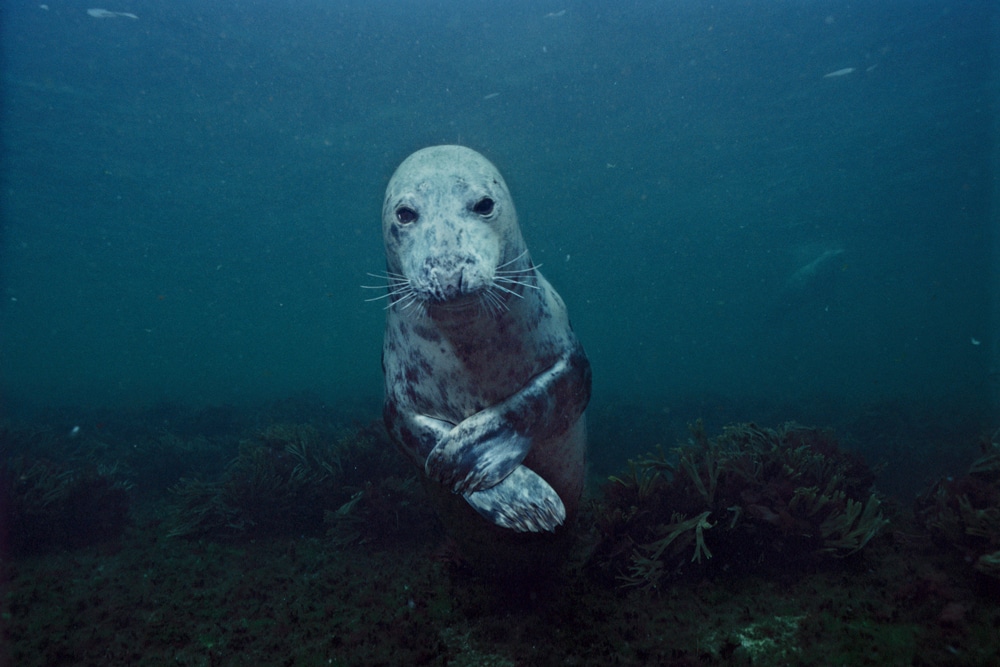 Gray seal off the coast of Acadia National Park, Maine.

In his book Ocean Soul, Skerry writes: “Swimming over the volcanic sands of [Japan’s] Suruga Bay is like entering a fairy tale, with characters to be found around every turn.… I felt like Alice having entered the looking glass. At the depth of about 100 feet, I saw a soda can, its shiny exterior encrusted with marine growth. From inside the can I saw a flash of color and moved in for a better view…. I crawled to within a few feet of the can. From the darkness inside, a tiny yellow goby stared at me with green eyes from his pop-top window. I inched closer and watched the fish disappear and reappear like the Cheshire Cat. Thinking I might hear the goby speak at any moment, I focused my lens on the fairytale scene.” 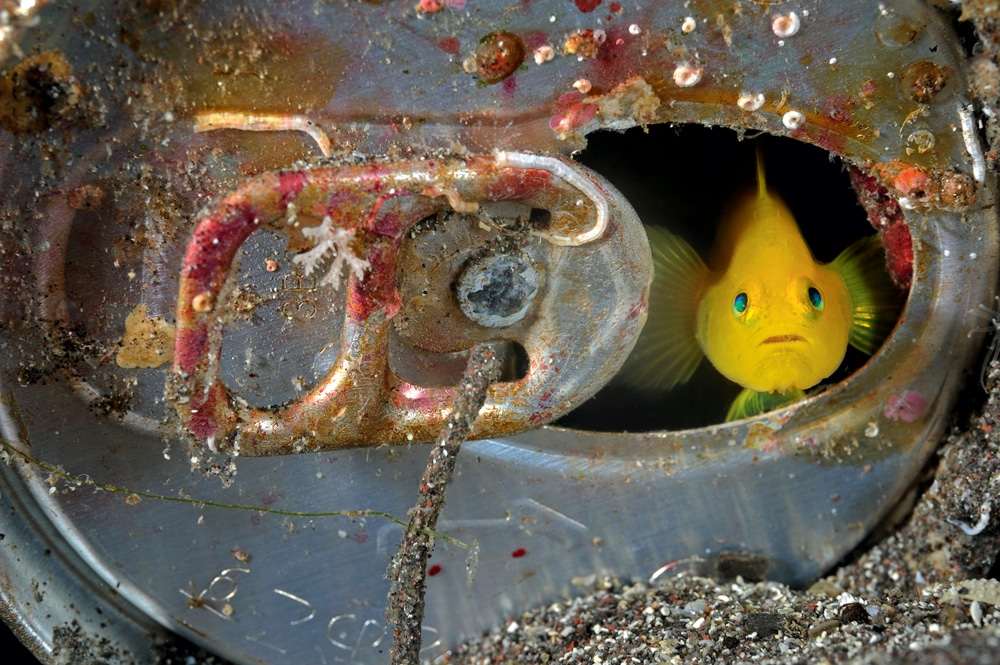 Although Skerry wants people to share in the wonder and beauty he finds beneath the waves, he also wants them to be deeply troubled by how fragile the ocean ecosystem has become. While documenting the global fishing crisis for National Geographic, he photographed giant bluefin tuna—a species he calls “the thoroughbreds of the ocean” for their awesome speed and power—stacked up like cordwood on Tokyo fishing piers. That cover story came with a price: Skerry grew physically depressed by what he’d seen. He’s photographed sharks off Cape Cod, in the Bahamas, and in the Pacific, and while that work led to his book Shark, every frame he shot came with the knowledge that 100 million sharks are killed each year, many for their fins alone. But he also explores ecosystems that are all but untouched by man, and when he shows people those photos of surreal beauty—from, say, a remote ocean preserve in New Zealand, or Kingman Reef in the Central Pacific, “a diver’s holy grail”—he hopes they embrace the idea that even as we have damaged the sea, so too can we restore it. “I want my grandkids to have healthy oceans,” he says. 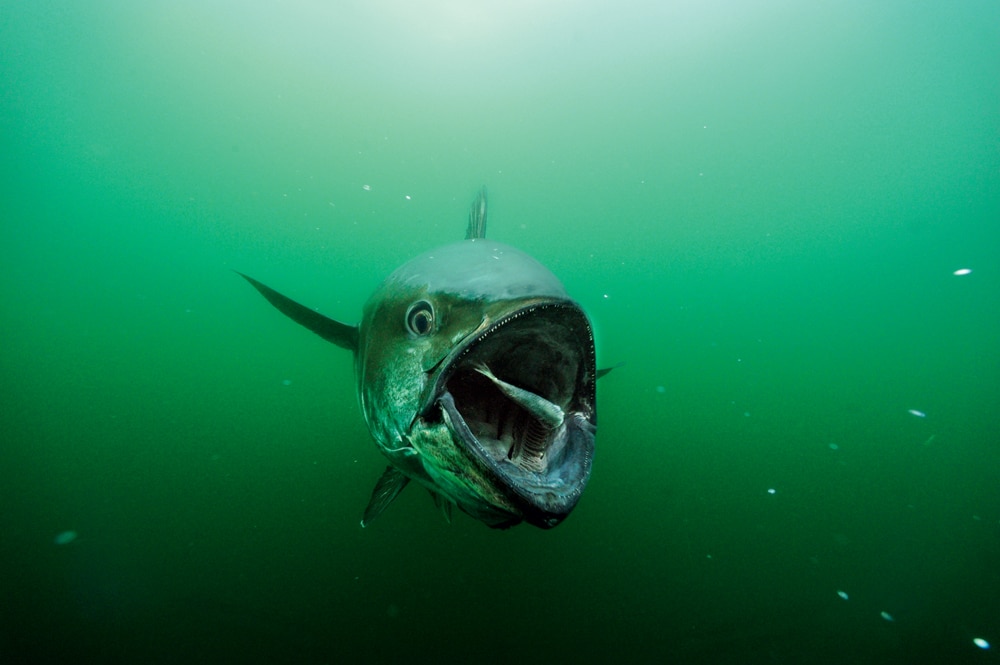 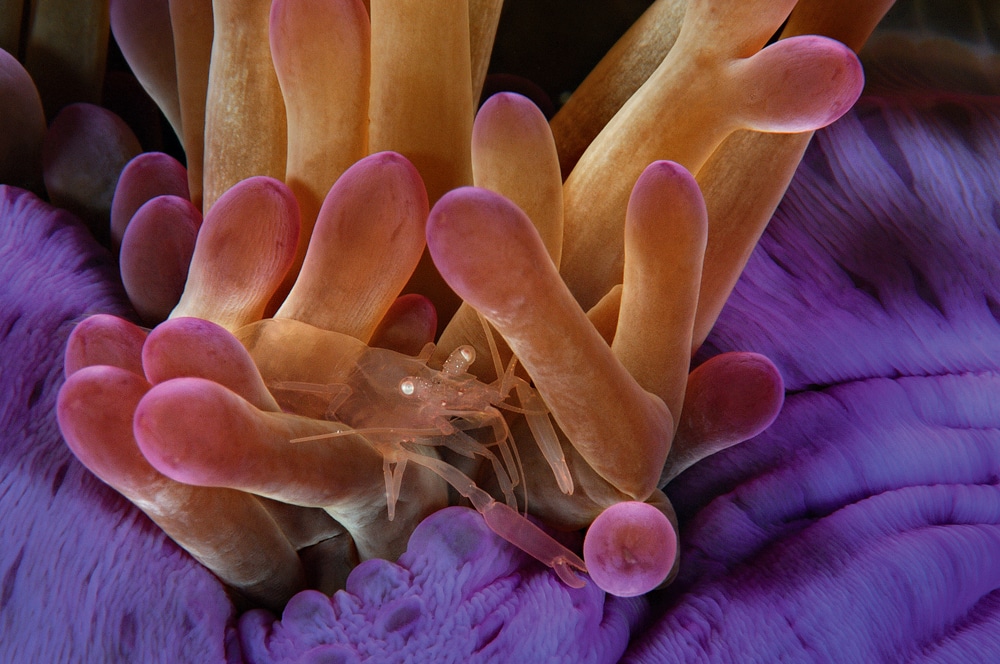 A tiny translucent shrimp (about half the size of a grain of rice) living in a sea anemone, Kingman Reef, Central Pacific. 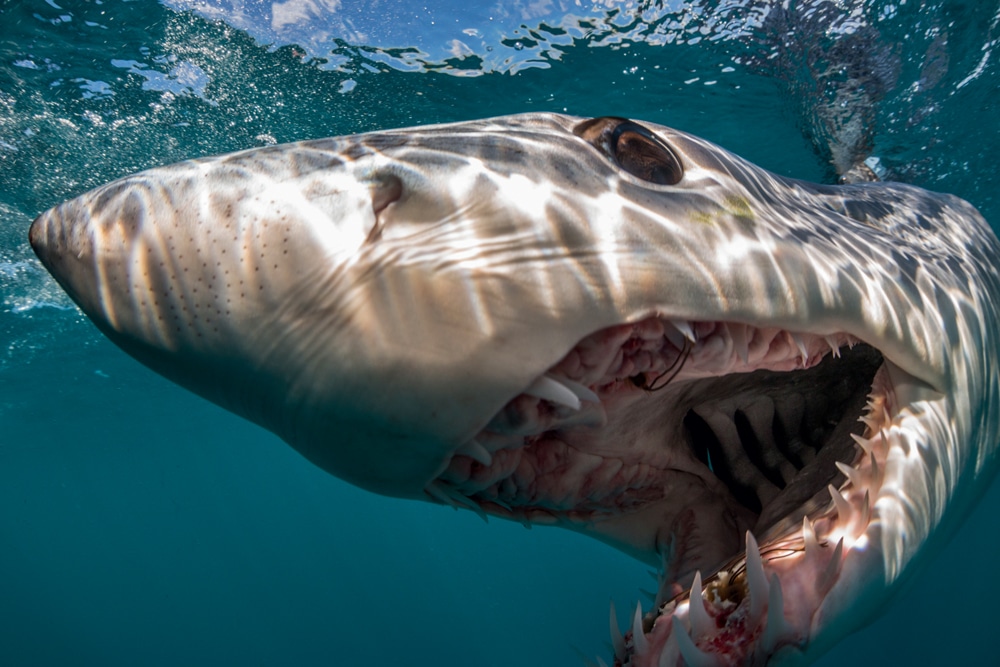 When people tell Skerry they want to protect the oceans but the problems seem too vast, he will quote the anthropologist Margaret Mead: “Never doubt that a small group of thoughtful, committed citizens can change the world.” He finds hope and inspiration in the researchers who devote their lives to understanding marine life, individuals who have worked with him on projects around the world. For instance, scientists have been studying spotted dolphins for more than 30 years, opening a new window on our relationship with these wild and beautiful animals. The balletic photo of spotted dolphins in the Bahamas [below] captures what Skerry has written about his own work: “I believe my most important role remains as an artistic interpreter of all that I see and as a storyteller. I want to understand the science but want to see and capture the poetry.” 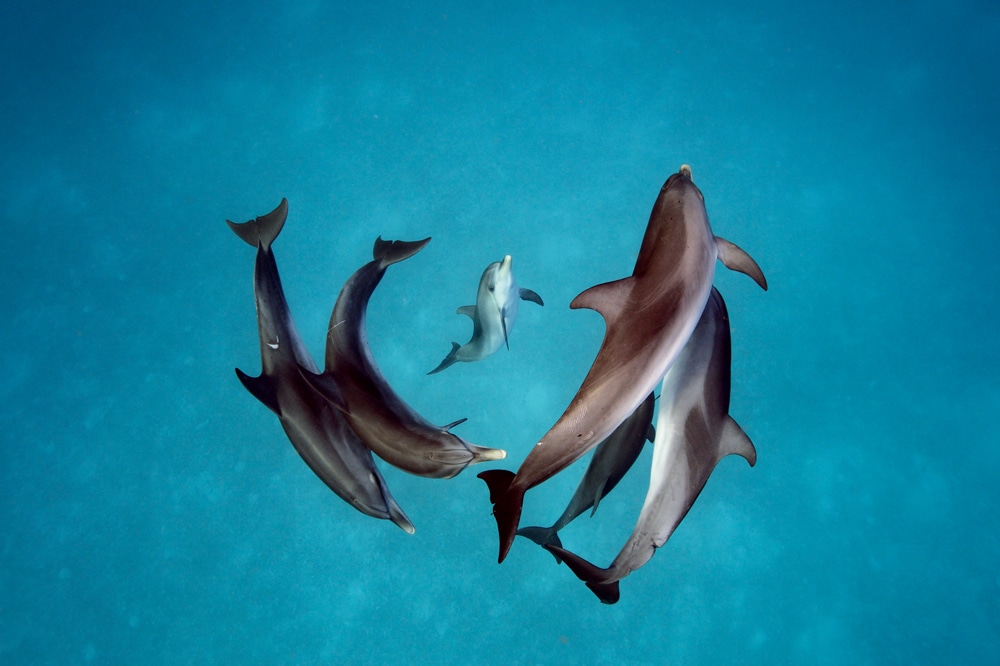 Spotted dolphins in the Bahamas.

Twitter to Launch Subscription Service, Aims to Double Revenue by 2023