“The Worst Weather Disaster in New England History” by William B. Meyer was first published in the January, 1997 issue of Yankee Magazine. 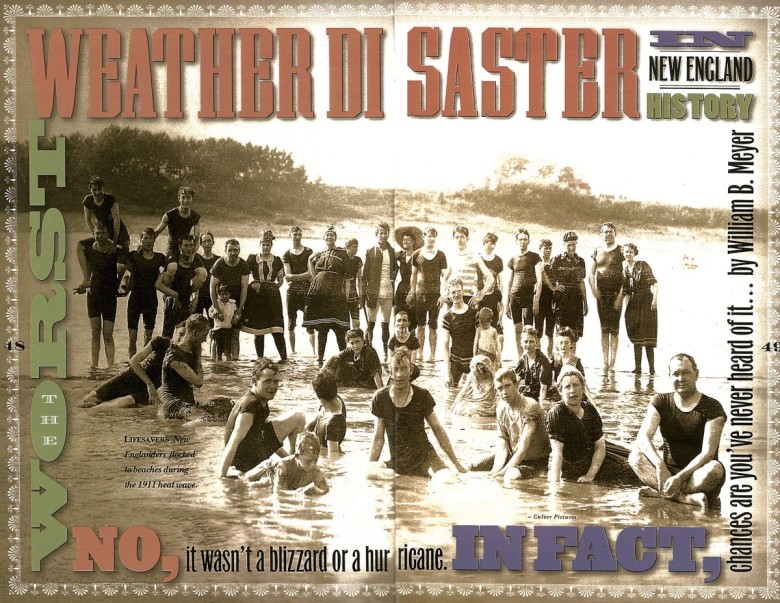 “The Worst Weather Disaster in New England History” by William B. Meyer was first published in the January, 1997 issue of Yankee Magazine.

Bad weather is a fact of life in New England; to be remembered for long, it has to be bad indeed. Perhaps half a dozen legendary spells could compete for the title of the region’s worst ever. For death and destruction at sea there is the Portland gale of 1898; for disruption of life on land, the blizzards of 1888 and 1978; for the most damage to property, the twin hurricanes Connie and Diane of 1955; for overall harm, the hurricane of 1938; and for greatest loss of life, the heat wave of 1911.

The heat wave of 1911? Chances are you’ve never heard of it, though you’ve probably heard of most of the others. They’re all secure in the meteorological Hall of Shame. The most deadly spell of weather that has ever affected New England is not. We remember 1816, the year without a summer, but not 1911, the year that had altogether too much of one.

That summer began forgettably enough. Pleasant June temperatures, a bit below normal, offered no distraction from the rest of the month’s news. An old dictator was toppled in Mexico; a new king was crowned in London. At home, Congress debated freer trade with Canada; New England’s senators mobilized to save the Portsmouth Navy Yard from closure; Boston saw its first airplane in the sky overhead; the Red Sox struggled. But July took over in a different spirit, and it would be weeks before news other than the weather could claim anyone’s full attention once more.

On Saturday, July 1, temperatures across New England were near 90º. They neared 100º on the second, the hottest day in a decade, and the first deaths and hospitalizations were reported. Monday the third broke all-time high readings, with a temperature of 106º Fahrenheit in Boston. The new records lasted for only a day. After an oppressive night, New Englanders spent a Fourth of July hotter than any day in their official weather history — hotter, too, than any in history in New Orleans, Mobile, or Atlanta. The Weather Bureau in Boston announced a high of 103.6º. At the Nashua and Lawrence stations, it registered 106º. 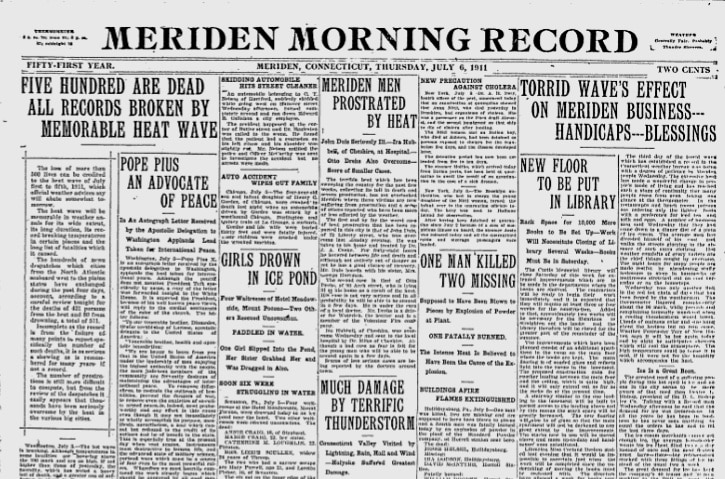 The July 6, 1911 edition of the Meriden Morning Record reported on the many deaths and drownings caused by the oppressive heat throughout the region, the worst weather disaster in New England history.

Never was Independence Day observed more listlessly. The turn-of-the-century Fourth was a notoriously rowdy occasion. In 1911, though, it took little urging from newspapers and civic leaders to keep it “safe and sane.” But the unaccustomed quiet was the only comfort to be had, and there was no promise of relief to celebrate, either. The fifth was nearly as hot as the day before. The heat broke briefly on the sixth, with violent and destructive storms in many places, but it returned in a day or two and drove temperatures back into three digits on the tenth and 11th. Not until midmonth was the siege finally lifted.

The temperatures were unheard of, but that was not all. What made them really lethal was the stillness of the air. Either the wind had itself been prostrated by the heat, or it had flown elsewhere in search of cooler weather. Flown south, perhaps. “Boston people have regarded Jacksonville, Florida, as exclusively a winter resort,” observed the Boston Transcript on the 11th, “but yesterday it was eight degrees cooler than this city.”

Even along the coast, the fabled sea breeze was hardly to be felt. Only a few corners escaped the worst heat: the islands (Nantucket stayed below 90º all July) and the far eastern end of Maine (at Eastport, where a sea breeze did spring up, it never exceeded 85º). The White Mountains sweltered in the upper nineties with the rest of New England. Water alone offered relief, and hundreds of thousands sought it out. Revere and Nantasket beaches for days became the second- and third-largest cities in New England. Inlanders resorted to any lake, river, or pond nearby, and tallies of drownings divided the headlines with lists of heatstroke victims. Mayors across New England kept city parks open after dark for the throngs who could not sleep in their furnacelike interiors; Boston Common at night became “a vast dormitory.”

The cities suffered the most. The crowding together of buildings, the artificial heat released, the replacement of grass and trees by stone, brick, and asphalt raised the actual temperatures far above even the records being set in the open country. The Weather Bureau’s reports irritated anew an old sore point in its relations with the public. All of its city stations were located atop the tallest buildings, in parks amid grass and trees or on the sparsely settled fringe. The Boston office crowned the Federal Building tower downtown. Shaded thermometers at street level showed ten degrees or more warmer than the official readings throughout the heat wave. For long periods they exceeded 110º.

Boys in New York City find relief by licking a large block of ice during the 1911 heat wave, the worst weather disaster in New England history.

If the urban heat-island effect was obscured in the official weather figures, it was clear in the mortality statistics. The larger the city, the higher the death rate from heatstroke. The entire toll outdid that of any other New England weather catastrophe. The hurricane of 1938 may have cost as many as 600 lives in the region; the Portland gale, 400 to 500. In Massachusetts alone, more than 1,100 certificates recorded the heat as cause of death during July 1911 (against a few dozen in all of 1910). Increase in total mortality is the best measure of a heat wave’s impact. Deaths in Massachusetts that July exceeded the normal for the month for the month by 1,400, in New England overall by 2,000.

Why, then, is the great heat wave so little remembered? In part, because it sent us no eye-catching picture postcards of its passage through New England: no towering snowdrifts, smashed seaside neighborhoods, or rescue boats floating past attic windows. Heat waves are the neutron bombs of natural disasters; they kill, quietly and invisibly, with little damage to property. Perhaps, too, it has been forgotten because it was so atypical. July 1911 was in every way the reverse of the usual New England weather calamity: not too cold, but too hot; not stormy, but unnaturally calm. If it is not remembered among the annals of New England weather, it is because it was not New England weather at all.

That is what made it so devastating, the way flash floods are one of the worst hazards in the arid West, the way the South can cope well with heat but is paralyzed by a few inches of snow. New England buildings designed to keep out the cold kept in the heat all too efficiently. Habits acquired in the usual stimulating climate were hard to change when the heat demanded a slower pace.

Having forgotten the past, are we likely to repeat it? A month as hot and still as July 1911 would probably do much less damage today. Weather events may recur, but they never affect the same society twice. New England in 1911 was a different world and overall a more vulnerable one. It was modern enough to suffer from the heat of congested cities; it was not yet modern enough to profit from devices available to us nowadays. Ventilation back then was poor, electric fans a costly novelty, refrigeration primitive, and home air-conditioning unknown; strenuous exertion was routine on and off the job, the automobile and the elevator reserved to a favored few; the poorest neighborhoods were crowded and oven-like beyond anything known today. Yet heat today remains a deadly hazard to many people: in particular, infants, the elderly, and all who lack access to air-conditioning. A brutally hot July in 1995 took more than 700 lives in Chicago. Many of them could have been saved with early emergency measures, had not Chicagoans, like New Englanders, forgotten how devastating heat waves can be. And while nothing is certain about global climate change, higher summer temperatures are one of the likeliest prospects.

Had you ever heard of the 1911 heat wave, the worst weather disaster in New England history?

“The Worst Weather Disaster in New England History” by William B. Meyer was first published in the January, 1997, issue of Yankee Magazine.