Portland is a city that knows how to feed its early risers, from the fishermen heading out to sea to the tourists gearing up for a day of exploring the coast. And the menus are hardly limited to diner fare (though you certainly can find worthy versions of home fries and eggs over easy, if that’s what you hanker for). All across town, seven days a week, creative chefs are turning out elevated breakfast sandwiches, southern comfort food, decadent pancakes, and more. When it comes to breakfast, Portland, Maine, has plenty of options worth waking up for. 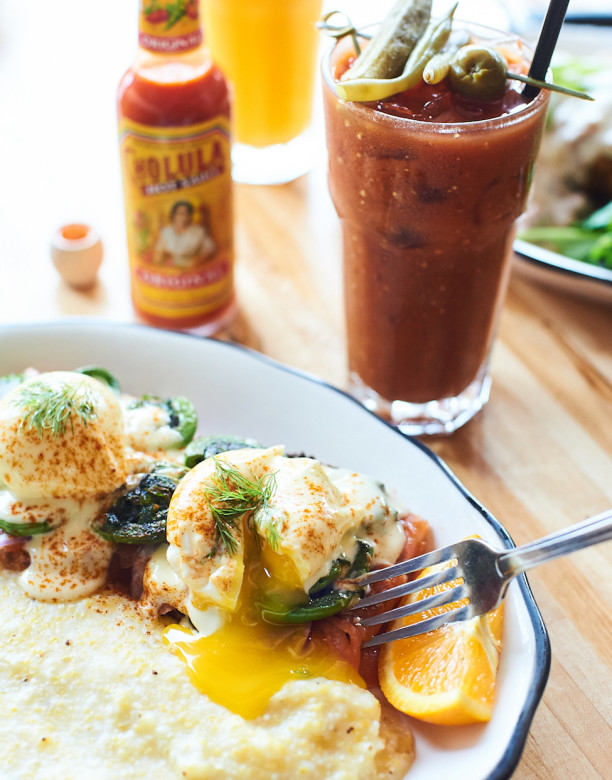 New Englanders typically don’t have much of a soft spot for Dixieland. But judging by the lines outside this West End eatery, they’ll make an exception when it comes to great southern cooking. Opened in 2006 by brothers Alec and Moses Sabina, Hot Suppa quickly emerged as one of Portland’s top daytime dining destinations. And although it expanded into dinner service around 2010, breakfast remains its original claim to fame: A recent poll of Portland chefs included a rave for Hot Suppa’s corned beef hash from Mike Wiley of Eventide Oyster Co., who said it “achieved the platonic ideal.” Other hits include eggs Benedict with fried green tomatoes or barbecue pulled pork, and juicy fried chicken covered in sausage gravy and local cheese curds atop a biscuit (aka “the Mother Clucker”). The finishing touch? A zesty Cajun bloody mary crowned with pickled okra and dilly beans. 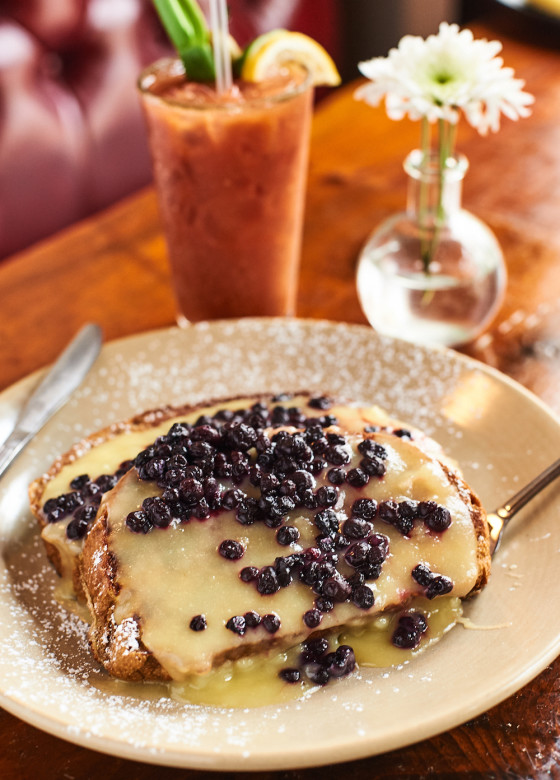 Known and loved for years as Bintliff’s, this Bayside neighborhood institution changed its name in 2015 while keeping a firm hold on its reputation as a premier breakfast/brunch spot. Overseen by husband-wife team Joe and Diane Catoggio, who bought the place in 2003, Bayside American Café prides itself on taking breakfast foods to the next level (one recent special: buttermilk pancakes topped with raspberry and blackberry compote and spiced white chocolate pearls) and spotlighting local offerings when possible. The maple syrup hails from Skowhegan’s Strawberry Hill Farms, for instance, while the coffee is from Portland’s Coffee by Design — which even created an exclusive Bayside blend. Favorite menu options include the Louisiana Bayou Benedict (homemade corncakes with poached eggs, smoky andouille sausage, and a Cajun-spiced hollandaise) and the cinnamon roll pancakes, which are exactly as addictive as they sound. 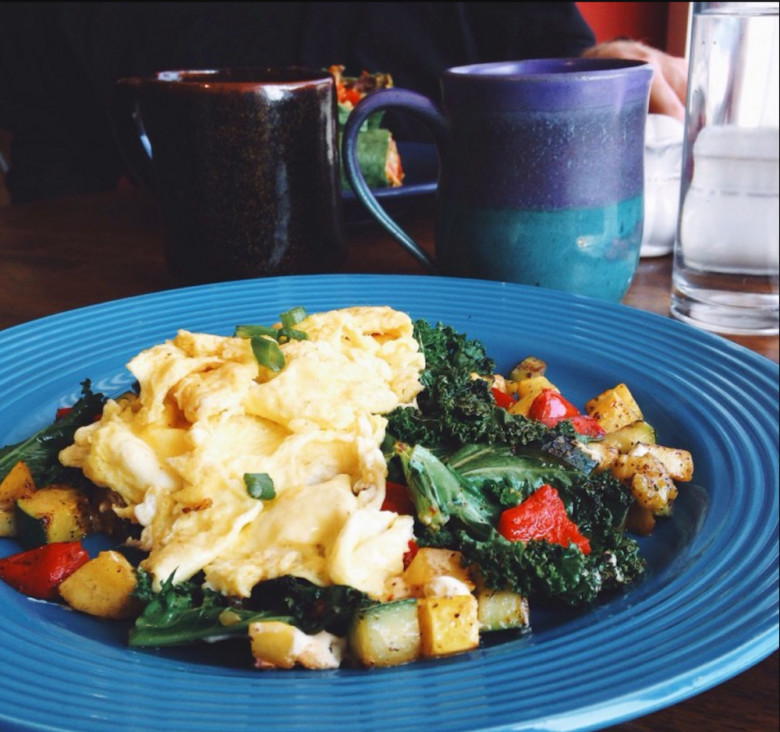 If you’re a fan of sunny little cafés, look no further than this Munjoy Hill eatery. An offshoot of the venerable Portland Pottery studio and supply store, the light-filled dining space is lined with shelves displaying potters’ creations in every size, shape, and color. It’s a great place to pull up a chair and dig into a hearty breakfast. Baked goods are top-notch, especially the giant blueberry buttermilk muffins, moist and packed with fruit. Egg lovers can enjoy frittatas filled with local meats and seasonal vegetables, while breakfast wraps tempt with such mixtures as house-made corned beef, eggs, kale, potatoes, and cheddar (memorably dubbed “the Mighty New Englander”). Rounding out the experience is the feel of wrapping your hands around the beautiful handmade mug that holds your coffee or, in colder months, hot chocolate that many consider to be the best in the city. 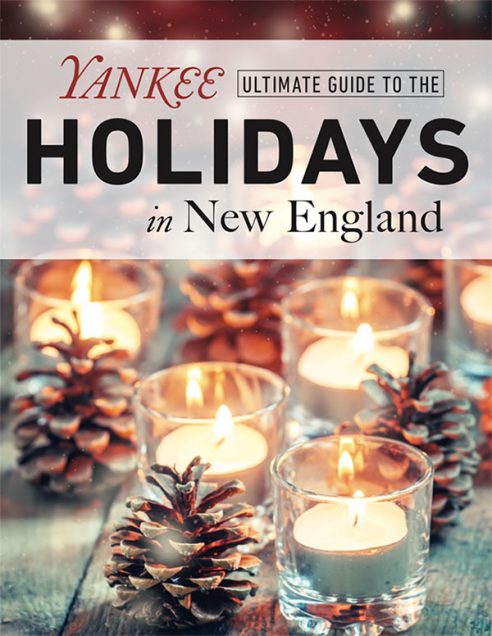 Another West End draw is this petite café, located in a can’t-miss-it red and yellow 19th-century building on the corner of Brackett and Gray. Though its lunch and dinner menu is small, its breakfast menu is even smaller: sandwiches. But oh, what sandwiches! You can make your own or choose from seven house specialties, all of which can be customized. The number 4, for instance, stars smoked salmon from local provider Browne Trading Co.; number 5 is a vegetarian delight of hummus, spinach, tomato, and extra-virgin olive oil. The number 1, though, is hard to beat: A plump bagel filled with maple-glazed prosciutto, Vermont cheddar, and egg with a kick of Tabasco, it was named by Food & Wine as one of the best breakfast sandwiches in America.

Old-school-Portland atmosphere doesn’t get any thicker than at Becky’s Diner, a wharfside establishment where the salty air and seabird cries outside give way to the smoky-buttery aromas and sizzle of the grill inside. Becky’s was founded more than 25 years ago by Becky Rand, a mother of six who mortgaged her home to open this Commercial Street joint. It’s grown in reputation ever since, boosted by praise from the likes of Alton Brown and Guy Fieri. Today Becky’s is famous enough to attract a crowd of diner-obsessed out-of-towners, but there’s always plenty of locals just looking to get their day started, too. Things get cooking as soon as the doors open at 4 a.m., with the kitchen turning out generous plates of eggs, potatoes, and meats in all the classic combos (the lobster omelet is a must-try). Sweet tooths will appreciate the fluffy pancakes and griddle-toasted homemade muffins, as well.

Did we miss your favorite breakfast spot in Portland, Maine? Let us know!

The Last Howard Johnson’s Restaurant in New England | Bangor, ME