Situated in the southeast corner of Connecticut less than two hours from Boston, the village of Mystic is a community that straddles not only its namesake river but also the best of New England’s past and present. Founded in 1654, this onetime shipbuilding center still retains the luster of the golden age of sail, with the sky-raking masts of the preserved 19th-century whaler Charles W. Morgan being among its best-known sights. But the streets where sea captains and shipwrights once roamed now bustle with visitors from New England and beyond, drawn by the relaxed seaside charm, a downtown filled with inviting shops and eateries, and some of the state’s most popular tourist attractions.

Whether you’re a history buff, a New England–phile, or just someone looking for a vacation escape, you could easily spend a week or more exploring this comely waterfront town. However, if you have just a day or two, here are the five best things to do in Mystic, Connecticut. 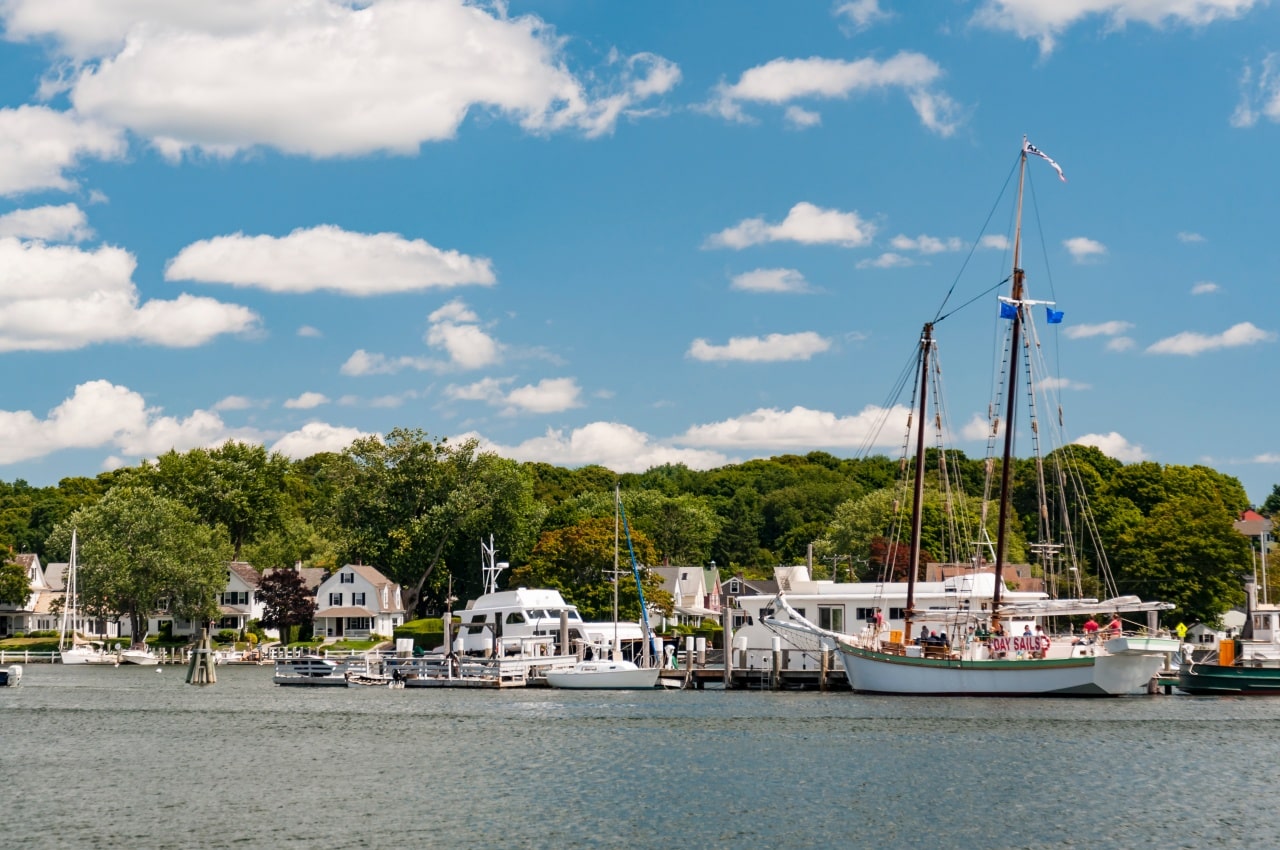 Maritime character is everywhere you look in Mystic, Connecticut.

5 Best Things to Do in Mystic, Connecticut

With more than 100 buildings and a fleet of wooden ships anchored in its harbor, Mystic Seaport is a 19-acre historical wonderland — and Connecticut’s top tourist attraction, to boot. There’s a re-created 19th-century seafaring village with restored houses and all manner of workshops, plus exhibit halls, vintage gardens, a planetarium, a children’s museum, and boat rentals and cruises. At the far end of the campus stands the museum’s preservation pièce de résistance: a fully functional shipyard. There, you can watch honest-to-God shipwrights practice their ancient craft. In 2013, they completed their greatest opus, a five-year restoration of the Charles W. Morgan, the largest wooden merchant ship, and the last wooden whaler, left afloat. As of mid-July 2020: Mystic Seaport is open but operating under COVID-19 safety guidelines, including requiring visitors to wear masks and observe social distancing. While most indoor exhibits are closed, visitors can access the outdoor spaces, the top decks of historic vessels, the shipyard, and portions of the village. The boathouse and launch are also operating for those who want to get out on the water.

At Mystic Aquarium, the welcoming committee takes the form of New England’s only beluga whales, swimming in their outdoor pools just to the right of the entrance. Nearby are Steller sea lions and northern fur seals and a colony of more than two dozen South African penguins; inside are tanks of hypnotic jellyfish and other sea creatures. Among the other draws at the aquarium and research center — which in 2017 became one of fewer than 20 institutions worldwide to be certified by American Humane Conservation — are a 1,000-square-foot exhibit of 30-plus frog species and a display of 12 giant animatronic dinosaurs. As of mid-July 2020: The aquarium is open but operating under COVID-19 safety guidelines, including requiring visitors to wear masks and observe social distancing. Advance online reservations required.

Don’t miss your chance to sail out of the fabled port where more than 600 vessels were built during America’s seafaring age. Aboard the two-masted schooner Argia, you’ll motor down the “Missituck” (“wavy river”), as it was christened by native peoples, then the crew will invite you to help hoist the sails. You’re bound for sheltered Fishers Island Sound on a voyage that showcases islands, lighthouses, and local lore. As of mid-July 2020: The Argia is sailing, but tickets are sold online in advance and only in pairs or triplets (for four or more, contact the office directly). There have also been some changes to operations in light of COVID-19 safety guidelines.

Lobster by the Water

Pizza might be Mystic’s food “celebrity” — thanks to the 1988 Julia Roberts film Mystic Pizza — but local seafood is the real star. Fans of classic lobster shacks may want to start in the tiny neighboring village of Noank, set on a peninsula where the Mystic River meets Long Island Sound. There lies the famous Abbott’s in the Rough, a BYOB joint that dates back to 1947, which pairs great water views with fresh local seafood. It has just about anything a shellfish lover could desire but is best known for its signature hot lobster roll, which comes in four-ounce, seven-ounce, and full-pound (!) versions. Another must-try seafood in Noank is Ford’s Lobster, where offerings include the Lobster Bomb, a small loaf of hollowed-out bread stuffed with eight ounces of lobster meat and topped with a ladleful of lobster bisque. In Mystic, Sea View Snack Bar boasts gorgeous river views from its picnic tables as well as a full menu of summer favorites — crab cakes, clam fritters, deep-fried whole belly clams, etc. — plus, of course, a tasty lobster roll (this one served cold with mayo, for those who prefer the “Maine”-style). As of mid-July 2020: Connecticut restaurants are allowed to operate under the latest state guidelines. Abbott’s, Ford’s, and Sea View have all reopened for the season; check their websites for the latest information.

Though this attraction has a limited seasonal operating window — September to early December — it still makes our list because, honestly, there’s nothing else like it. B.F. Clyde started producing hard cider in 1881, and less than 20 years later he invested in machinery that still springs to life here each fall: Gears clatter, belts rumble and hum, cider gushes. Each week during the harvest, nearly 75 tons of handpicked Hudson Valley apples are transformed into nonalcoholic sweet cider, apple wines, and potent hard ciders (including soul-warming, pumpkin-spiced Spider Cider). To see history in action, visit during cider-making demonstrations on October and November weekends. As of mid-July 2020: B.F. Clyde’s traditionally opens for the season on September 1. Visitors should check the website later this summer for the most up-to-date information.

Have your own list of the very best things to do in Mystic, Connecticut? Leave your picks in the comments below!

More Mystic, Connecticut, Things to Do