You've Got a Friend in New Social-Media Apps

VC Lindy Fishburne on the seemingly sudden democratization of science

How to Understand the Small-Stock Rally

The Bay Area Exodus That Wasn't

The Covid Baby Bust Could Reverberate for Decades

Today is the first day of 2021 that millionaires make no contribution to Social Security.

Social Security gives retirement, disability, and survivor benefits to almost one-in-five Americans every year, many of whom are children. However, contributions to the program are capped to the first $142,800 of wage income per year. This means that someone who earns $1,000,000 in 2021 stops contributing to the program on February 23.

Most people make less than $142,800 per year, so they pay the 6.2 percent payroll tax on every paycheck in 2021. But those who make more than $142,800 don’t have to pay into the program once they hit that cap. That makes their effective tax rate lower than everyone else’s; for a millionaire it’s not even one percent of their income. The burden of supporting Social Security falls more heavily on those who make less.

Despite the importance of the program, the Social Security Trust Fund is projected to have a shortfall in coming years, due largely to increasing income inequality. In 1983, 10 percent of wage income was above the cap, in 2018 almost 17 percent was. This upward redistribution has shifted income out of range of the program’s supporting revenue stream.

Scrapping the payroll tax cap entirely and making everyone pay the same tax rate, together with modest changes to the program, could eliminate the shortfall entirely and allow for expanding benefits, which are increasingly necessary to support American workers.

CEPR’s calculator below lets you see for yourself when people with various wage incomes stop paying into Social Security.

Some other salaries which might be interesting to enter are: 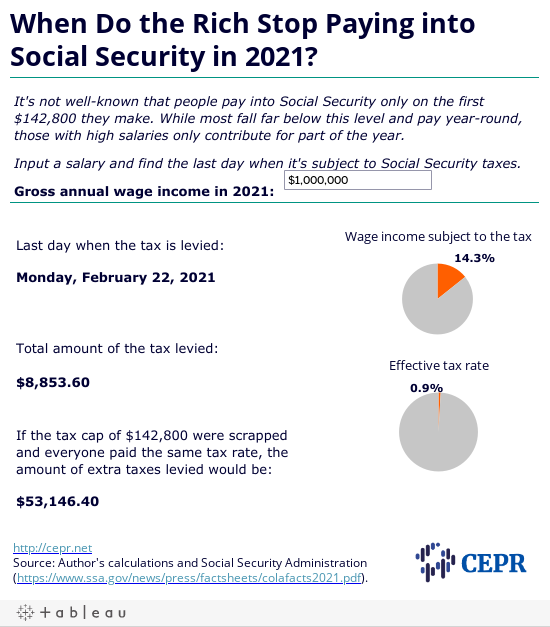 The post Wage Cap Allows Millionaires to Stop Contributing to Social Security on February 23, 2021 appeared first on Center for Economic and Policy Research.