When Louisa Conrad and her husband, Lucas Farrell, began farming a little more than a decade ago, these two artists had a pair of overriding goals: They wanted to work with goats, and they wanted to bring their creative instincts to what they produced. “We intended to be more of a cheese farm, but then the caramels just took over,” says Conrad, referring to the sweets that have helped put Big Picture Farm, their hillside dairy and creamery in Townshend, Vermont, on the map. Conrad’s drawings decorate the packaging, and each goat milk caramel is bundled in wax paper by the farm’s 1970s Jolly Rancher wrapping machine. Over the years, Big Picture Farm’s caramels have been featured on The Today Show and in The New York Times, and they regularly take top honors at the acclaimed Fancy Food Show and Good Food Awards. 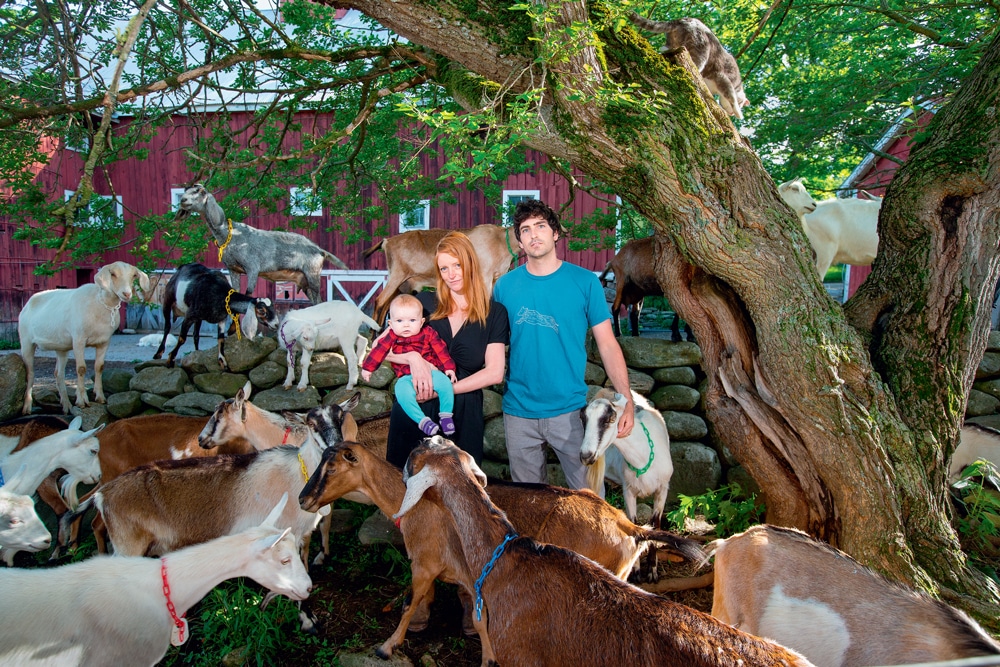 Q. You’re an artist, your husband is a poet—did you two ever imagine doing what you’re doing now?

It wasn’t on our radar screen, but at the same time so much of the work lines up with who we are. I get asked, “When are you going to get back to art?” The truth is I’m 100 percent creatively satisfied working in collaboration with goats on a hillside and creating a product from their milk. I think what I never could have imagined is how satisfied I’d be staying in one place. People forget that farmers are stuck where they are, for better or worse. For us it’s been better, because we’ve had this chance to throw all our eggs into one basket.

Q. Tell me about what it’s like to work with the goats.

Where to begin? For starters, they’re the best. They’re magical and mystical—they’re more like dogs than sheep. Which means they’re smart, so they’re also a pain in the neck. But they’re super-friendly and have goofy personalities. I also think they’re extremely beautiful creatures. They’re a nice size. They’re a very manageable animal to work with. Our farm is on a rocky, bony hill, with fields littered with rock piles from previous farmers. It’s not something you could do a lot with, but it’s perfectly suitable for goats.

Q. From the types of caramels you’ve created to how they are packaged, there seems to be a certain kind of experience you want to give your customers. How would you describe it?

I want people to think about where their food comes from, so when they pick up one of our caramels they go, “I didn’t know you could make caramels from goat milk.” Even with something like a candy, your assumptions can change. I want people to be aware that what you’re buying comes from somewhere, where there are animals involved in making it, and there is labor and love that went into creating it.

Q. Most people’s idea of caramels is probably those mass-produced things we ate as kids. What’s different about the caramels you’re making?

Those other caramels use corn syrup and butter—there’s no milk. Which presents some challenges for our version. It isn’t shelf-stable, so that’s why we can’t use large distributors. Mostly mom-and-pop shops carry our caramels.

When we started, we wanted to tell the story of goats. So we include a booklet that describes the goats, and you can go on our website and find out what the goats were eating on the day your caramels were made. It’s a little wonky and weird, but it’s fun to have people think a little differently.

Over the past few years, we’ve been opening the farm up to agritourism, which has been a lot of fun for us, especially when people stay at the farm. You can come for a farm tour and go in with the goats, and that’s lovely, but to wake up here and really breathe the air, to hear the roosters in the morning and to see people have that experience slowing down, is very satisfying. For the first five years we worked so hard to build our business, we just had our faces to the ground nonstop. And so to look up and engage with the community, that’s been very special for us.

Season five of Weekends with Yankee, which includes our visit to Big Picture Farm, premieres in spring 2021 on public television stations nationwide. To find your local listings, go to weekendswithyankee.com.