Gray belongs to the island of Nantucket — to its Quaker-shingle houses and its fog. But Nantucket red, which fades to pink with time, is the color that represents your love for the island. 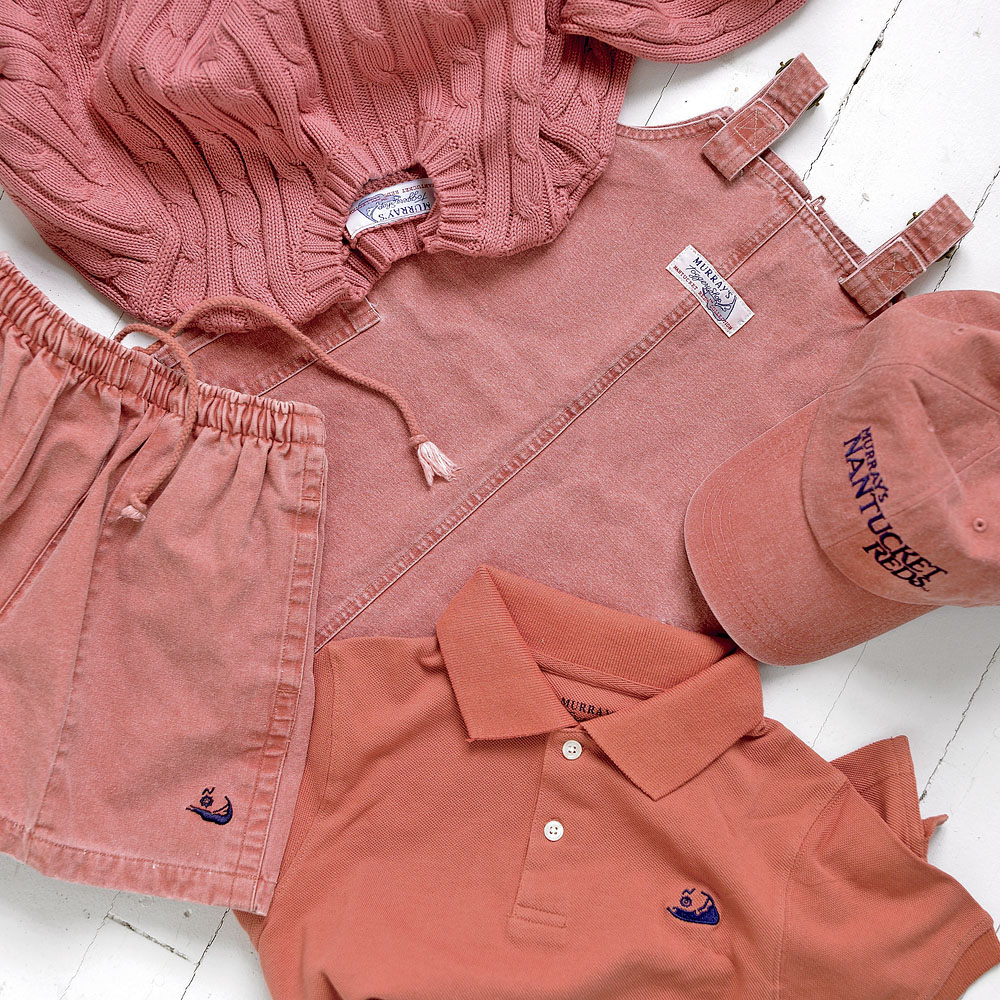 Nantucket Red, in all its faded glory.

What is Nantucket Red?

In short: it’s red that had faded to a salmon-ish pink.

Philip C. Murray introduced the hue via brick-red sailcloth pants in the 1950s, when he took over The Toggery Shop (now Murray’s Toggery Shop), at the top of Nantucket’s cobblestone Main Street, from his father.

Influenced by New York Yacht Club uniforms, “Nantucket Reds” began as insider shorthand for the well-heeled, but casual, Nantucket summer life. As is its nature, the color lost its pristine luster with washing, and clothiers now make shirts, caps, sweatshirts, and any wearable thing in the worn-red hue. Much to the chagrin of stores like J.Crew, which tried to market its own line of similar clothing a few years ago, Murray’s Toggery is legally the only company that can sell official “Nantucket Reds” — which it does now in everything from skirts to shirts to pants.

Today, you’re just as likely to see a titan of industry wearing a pair of proper Nantucket Red pants in Palm Beach as you are to see a Boston-area college student sporting a faded Nantucket Red cap on campus as a souvenir of those perfect summer days on The Faraway Island.

Do you own any “Nantucket red”?

Here’s what some of our Yankee Facebook fans had to say when we asked them:

Matthew H.
No self-respecting Preppy would be without a pair of Nantucket Reds. They are acceptable in practically any gathering short of a funeral. I have worn them for 40 years. Love how they fade to like a sunset as the years go by.. burnished red to a pale pink before they become too threadbare and become relegated to boat painting days or gutter cleaning duty.

Katherine S.
Yes! I love it! Pants, skirt, Bermuda shorts. Mine are not by Murray’s, so I guess it’s Nantucket fred (faux + red = fred).

This ode to Nantucket Red originally appeared in Yankee Magazine in 2008 and has been updated.

SEE MORE:
Winter Weekend on Nantucket
Why You Should Visit Nantucket in the Spring
Cape Cod, Nantucket & Martha’s Vineyard Lighthouses

The post What Is Nantucket Red? appeared first on New England Today.

Simon Cowell was her judge. Now, she's filling in for him

Tencent Will Struggle in the Greatest Game of All

The futuristic yacht that's designed from the inside out